India Economic Conclave 2018 had presented the power-packed agenda of ‘India fast-tracking to $5 trillion economy’ and this year driving the agenda forward from aspiration to action, the conclave focused on channelling the full potential of Southern region to enable India’s growth & prosperity. Continuing with its legacy of celebrating the leadership of Indian economy at the world stage, India Economic Conclave – South Chapter curated thought provoking sessions, insights and inspiring glimpse into the future with a clear focus on regional competencies, high impact sectors and relevant challenges by bringing together local industries, businesses, policymakers and influencers under one roof. 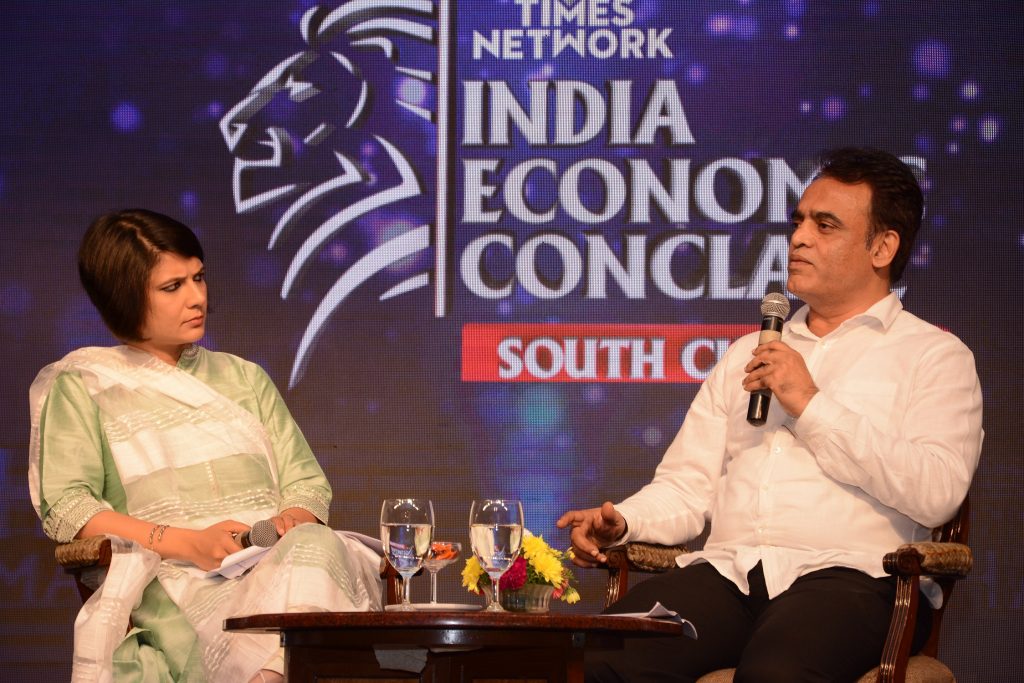 MK Anand, MD & CEO, Times Network delivered the welcome address and B.S.Yediyurappa,  Chief Minister Karnataka set the context for the Conclave with his keynote highlighting the state’s role in supporting India’s rapid economic transformation to a global powerhouse. During a fireside chat Piyush Goyal, Minister of Railways & Commerce reflected onthe contribution of the industries in South India to India’s GDP. Bibek Debroy, Chairman – Economic Advisory Council to PM reflected his thoughts on the role of South India in boosting the economy.

MK Anand, MD & CEO, TIMES NETWORK said, “India Economic Conclave 2019 – South Chapter champions India’s growth agenda by shedding light on India’s key region. South India is critical due to its location and demographics and the fact that it already rivals Indonesia in GDP. The region is home to our IT and Auto industries and is growing faster than the national average. We will attempt to look at finding enablers for the region as well as discuss lessons that can be adopted for other regions. The event assumes significance at a time when Indian economy is undergoing a slowdown and it has become crucial for the business and political stakeholders to work together to put the growth wagon back on rails”. 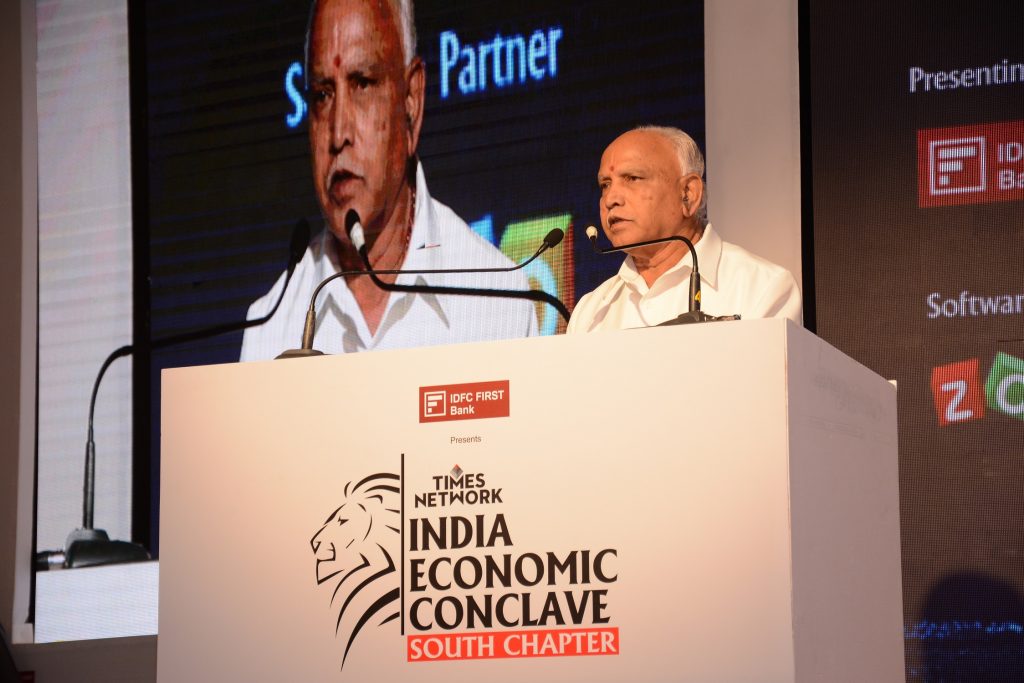 S Yediyurappa, Chief Minister Karnataka said, “I am extremely happy to be part of the India Economic Conclave 2019 South Chapter. I am glad that Times Network has taken the initiative to create such a platform that focuses on enabling rapid transformation of India into a Global Powerhouse. Karnataka is the fourth largest and one of the fastest-growing state in India, growing at 9.6 percent. To intensify this growth, we are taking steps to design policies, schemes to make Karnataka a global manufacturing and technology leader and a pioneer in driving sustainable, balanced and inclusive growth.”

He further added that “Karnataka is one of the top five R&D ecosystems of the world and also a second-best ecosystem for start-ups. The State has attracted over FDI of 37.67 billion US Dollars during the period April 2000 to March 2019, constituting 9 percent of FDI. This is Karnataka’s moment, and the State stands at a crucial moment in its history – with an unprecedented opportunity for transformation. I look forward to seeing Karnataka becoming even more active on the global stage where our utmost priority will be to establish a positive relationship between growth and jobs to achieve strong, sustainable and balanced growth”. 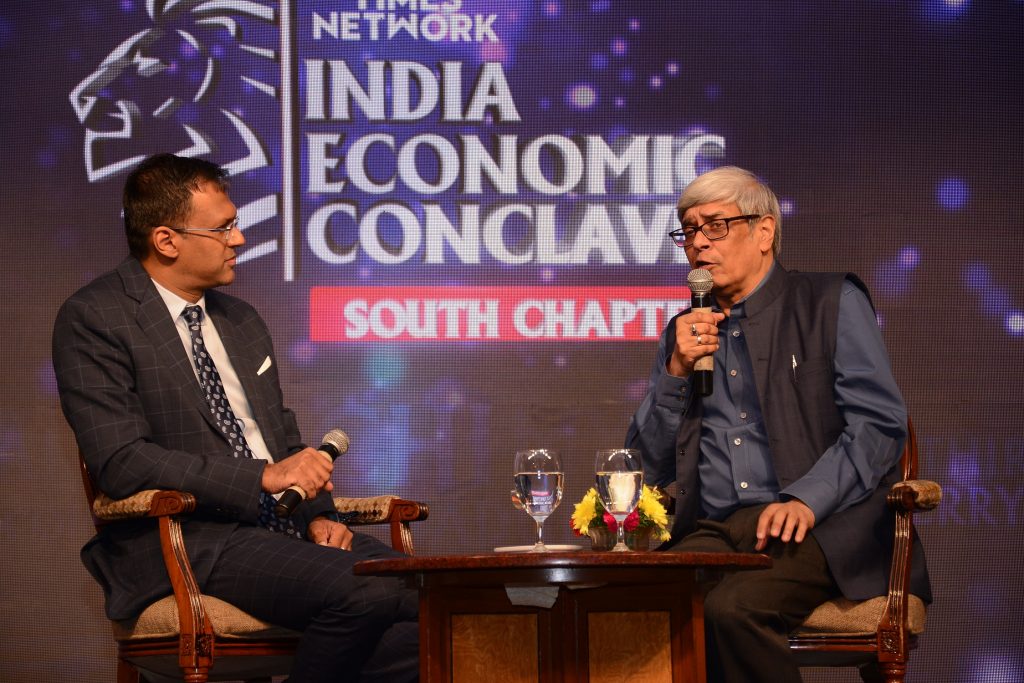 Piyush Goyal, Minister of Railways and Commerce during his inaugural speech at The India Economic Conclave 2019 South Chapter said, “South India is an extremely significant region for India and has heavily contributed to India’s overall GDP, with a contribution of more than 30 percent. States like Karnataka, Tamil Nadu, Kerala, and Andhra Pradesh are making their mark in leading industry sectors like Technology, Automobile, Pharma. Apart from that, we see tremendous potential in the fishery and tourism industries. South India majorly contributes to India’s defence sector. And we believe that all these factors will help us accelerate India’s growth. We are conscious about the possibility of a global recession, but as a country, we need to focus on upskilling our people and create more and better job opportunities for them.

Bibek Debroy, Chairman – Economic Advisory Council to PM said, “The aspirational target of $5 trillion is achievable, but depending on assumptions about the exchange rate, will require real growth of 8% or more. An all-India growth rate is aggregated from the level of the States. Thus, Southern India has a major role to play in terms of using factor inputs more efficiently and boosting productivity.There is a great deal of variation in GSDP (Gross State Domestic Product) growth rates in different States. Land markets and land legislation differ. The nature of demographic transition is quite different in the South. Therefore, labour markets and their dynamics are also different.”