New Delhi: Climate change has contributed to extreme weather around the world, fueling an increased number of phenomena like deadly floods, wildfires, and frequent typhoons. As extreme weather unfolds across the globe, people come to Twitter before, during, and after these events to talk about what’s happening. Powered by social insights and analytics, these real-time conversations can be harnessed to provide instant alerts, relief efforts, and assessment of the situation on the ground.

In India, we’ve witnessed Twitter doubling up as a tool to support relief efforts during several natural crises. For calamities like the Goa floods of 2021, Cyclone Yaasand Cyclone Tauktae, Twitter has been a medium for official authorities/government bodies to stay in touch with the public and keep them informed around developments and rescue efforts. During the #ChiplunFlood in Maharashtra this year, residents took to Twitter to seek rescue help for themselves and their kin, and several turned up to amplify these calls.

Twitter provides companies and individuals with programmatic access to Twitter data through its public application programming interfaces (APIs), allowing them to build apps and tools for consumers to draw insights out of Twitter. Following natural disasters including the Jakarta flooding in Indonesia, Australian bushfires, and Typhoon Hagibis in Japan, Twitter worked with Peta Bencana and Twitter Official Partners likeBrandwatchto help local communities understand trends in conversation data. In addition to using the service to share resources, raise funds, and rally around one another, the Tweets create a wealth of social data that can be used to understand the issue of climate change and the crisis more broadly while enabling policymakers to respond to future climate emergencies.

In collaboration with award-winning creative studio Design I/O, Twitter has unveiled an interactive webpage that explores how conversations evolved on Twitter  during each extreme weather event:

The Intergovernmental Panel on Climate Change (IPCC), the United Nations’ climate science research group, recently concluded in a report that human-induced climate change is already affecting many weathers and climate extremes in every region across the globe – including increases in the frequency and intensity of hot extremes, marine heatwaves, and heavy precipitation.

The extent of extreme weather events is reflected in public conversations on Twitter too. A sample of English-language Tweets from 2013 to 2020 indicated that mentions of “climate change” grew an average of 50% each year. 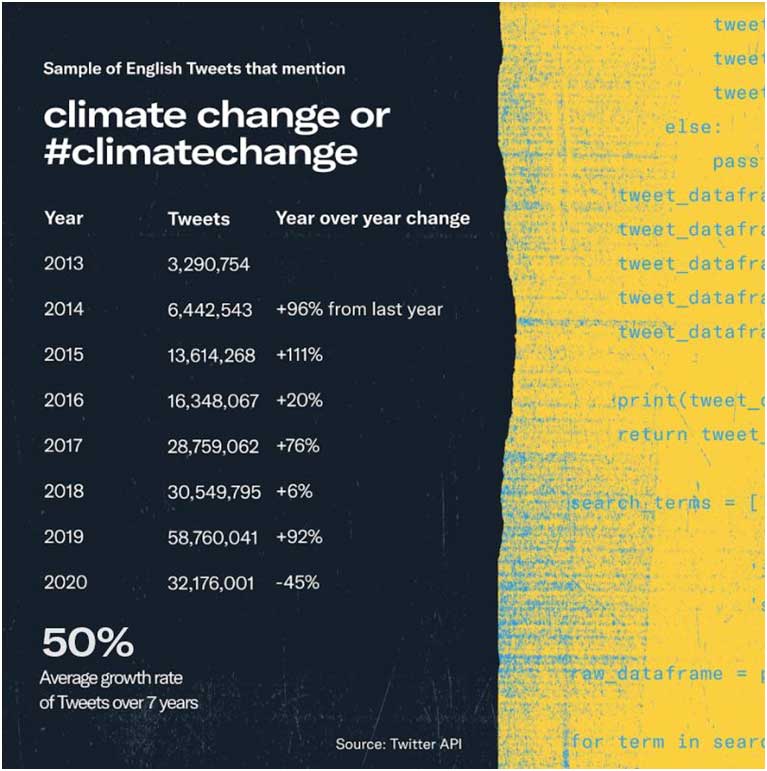 These Tweets have proven to be powerful and influential as environmental activists use Twitter to raise awareness about the climate crisis, organize their communities, and connect with others passionate about protecting the planet.

“Developers consistently inspire us with the ways they support people in crisis during natural disasters. The #ExtremeWeather visualization showcases what can be achieved when our developer and partner communities leverage the Twitter API and apply these insights to the public good. We hope this work sparks conversation, increases awareness, and creates a connection between those passionate about climate change and disaster relief,” said Amy Udelson, Head of Marketing for the Twitter Developer Platform.

By utilizing the vast amount of data about public conversation Twitter provides, developers have the opportunity to build solutions that help local communities during unforeseen extreme weather events or study public sentiments about climate change without human bias.

Addressing the climate emergency together

Home to more than half of the world’s population, the Asia Pacific region is one of the most vulnerable to the devastating effects of climate change. Twitter has played a critical role in providing actionable information during extreme weather events and can continue to do so with the support and commitment from developers who are passionate about building for the climate crisis.

“Twitter’s uniquely open service has been used by people all around the world to share and exchange information in times of crisis. We recognize our responsibility in ensuring that people can find the information they need especially during a natural disaster and have worked to amplify credible information from trusted media, government agencies, as well as relief and volunteer organizations,” said Kathleen Reen, Senior Director Public Policy and Philanthropy, the Asia Pacific at Twitter. “We’ve seen how Twitter data can be used in real-time to provide vital support to people on the ground, and raise broader awareness and understanding of the impact of a crisis. As always, we remain committed to empowering more people to play an active role in driving positive social change, alongside our partners.”

Learn more about working with Twitter’s API as a developer, research, or business on Twitter’s developer forums or follow @TwitterDev.