The need for new characters and immersive stories is at an all-time high and India’s leading kids’ entertainment franchise Nickelodeon, continues to address this need by entertaining kids with endearing characters through new formats and relatable storytelling. Leading the local IP content game with innovation in its DNA, Nickelodeon is all set to launch its 11th homegrown animated IP ‘Chikoo aur Bunty’, the only show in the category that is based entirely on the sweet-sour and inseparable relationship between siblings. Growing from strength to strength with a robust programming strategy, Nickelodeon has successfully identified white spaces and created path-breaking localized content appealing to children in India. With local home-grown Nicktoons such as Happy &Pinaki – The Bhoot Bandhus, Ting Tong, Golmaal Jr., Motu Patlu, Shiva and Rudra to name a few, Nickelodeon has introduced kids to new genres of entertainment.  The last IP launched by Nickelodeon, Happy & Pinaki – The Bhoot Bandhus was also a runaway hit amongst kids with the show consistently appearing in the top 10 highest rated slots of the category every week since its launch. With 700+ hours of local content, the franchise, today, dominates the kids’ space with winning IPs and has established itself as an undisputed category leader.

Adding further depth and scale to the brand’s diverse content portfolio, is the latest addition “Chikoo aur Bunty” which will bring forth sibling rivalry between the two brothers.  A story of every household, the show is set in a middle-class home where the duo lives with their parents and a playful and intelligent dog Barfi. The 11-minute episodic series will bring alive the fun, sometimes sweet and sometimes sour banter, and rivalry between the two brothers competing for affection and goodies, while avoiding being reprimanded by their parents for all their mischiefs at home.

Anu Sikka, Head – Creative, Content & Research, Kids TV Network, Viacom18 in conversation with MediaNews4U talks about the Indian IPs that Nick has launched over the years, the growth during the pandemic and much more.

Nicks growth all these years and how has it been during the pandemic?

Nick has been number 1 for the eighth consecutive year, so we couldn’t have been more thrilled. But the icing on the cake for us is Sonic which is today at the number 2 position.  Nick Jr. occupying 7% of the market share is another growth story for us. It’s a wonderful situation and position to be in even though the pandemic has been tough. We knew for a fact all the kids are sitting at home, this is when the viewership is going to skyrocket and the demand for the new content was at its all-time high which was a bigger challenge. And suddenly we had to deliver at a much faster pace than what was expected of us during the normal times. So I have to give credit to my entire team as well as all the studios.  On the other hand, we’ve never stopped. We continued to develop scripts and ensured once the studios were back on their feet, we had ample ammunition for them as far as scripts were concerned.  And we did create more than 100 episodes in a pandemic in during the lockdown. We give kids enough content and episodes with their favourite characters to keep them entertained in a very difficult situation. Nickelodeon is the only kids franchise to launch 11 made in India, IPS, are what has been the top strategy behind this move?

We make our own IPs because it gives us better control in terms of what we want to do, not just with storytelling, but also how then these characters can lend themselves. The beauty of kids and animation is that it is not just restricted to a series. Once characters are popular, and kids fall in love with these characters, these characters can lend themselves beautifully to so many different aspects which entertain a childlike creating video games, consumer products, etc. these characters almost become part of a kid’s life. This is why ensure that we create these IPs. I think l what motivated us was also the fact that there were barely any Indian IPs back then. Among all the kids channels that existed in India, at that point of time, we always felt that the characters what we create in India are more their relatable with the audience as compared to the animation that we were buying from all over the world. And that is what basically propelled us in continuing to invest in creating these local characters. Each show of ours was turning out to be a bigger hit than the last one that we created. That’s what encouraged us to depend on our shows.

Now coming to ‘Chikoo aur Bunty’, launch timing, We normally have two seasons in a year when we announce our properties. It’s either during the summer vacation, or it’s during this festive time when a majority of the kids have their vacation period. ‘Chikoo aur Bunty’, is a show which has actually been made at a record pace. not too many shows have been created at the pace at which this show has been created. Normally, any show development takes at least a year. We managed to create this literally in six months period as we wanted to catch this particular season. We know that the viewership is extremely high during these two quarters, especially during the vacation period. This is a tradition that we have kept alive. 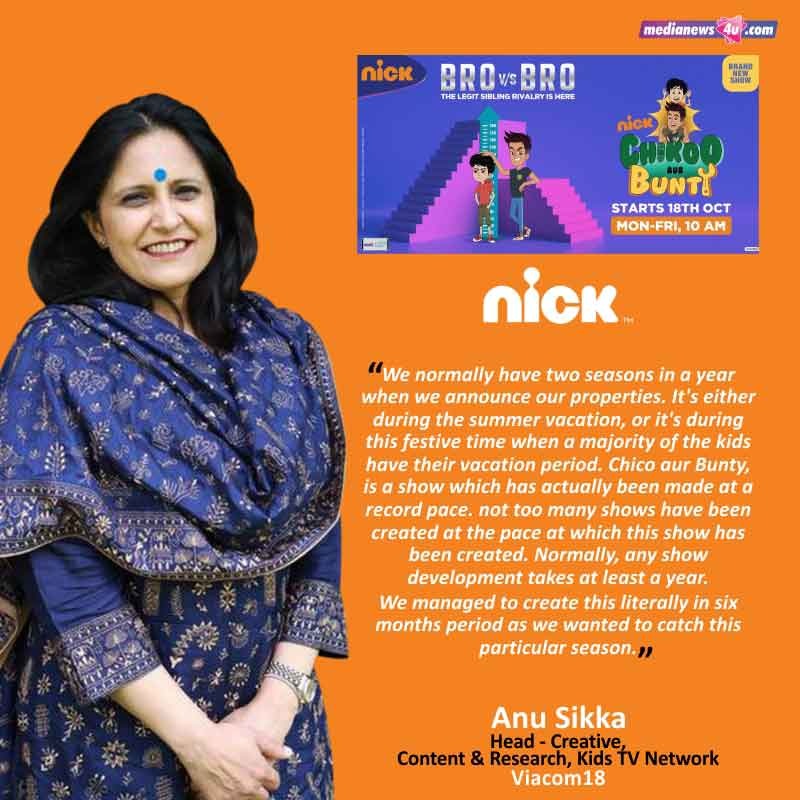 Anu you were talking about how children in India identify with the local characters, what is the global perspective to Indian characters in Indian animation? Like Motu, Rudra, Shiva and others?

A show that has done exceptionally well outside India is PakramPakkdai. It is a comedy show, which has been sold to approximately 30 territories outside India. It’s a chase comedy about animals. PakdamPakdaai cuts across cultural geographical differences that are born more easily. When looking to create shows that can travel outside India, one has to keep in mind certain factors that make it more appealing to the global audience. We are also creating a show called The Twisted Timelines of Sammy and Raj, a production between Nickelodeon India and Nickelodeon UK and it’s the first truly especially from India, which will be released on a global scale. It will be released on every channel of Nickelodeon world over. So literally everything from the start to the finish is being executed by an Indian studio. These are American writers and American Indian writers. We hope that shows like ‘Chikoo aur Bunty’, which is far more universal also goes as global as possible given it is developed on the subject of sibling rivalry. 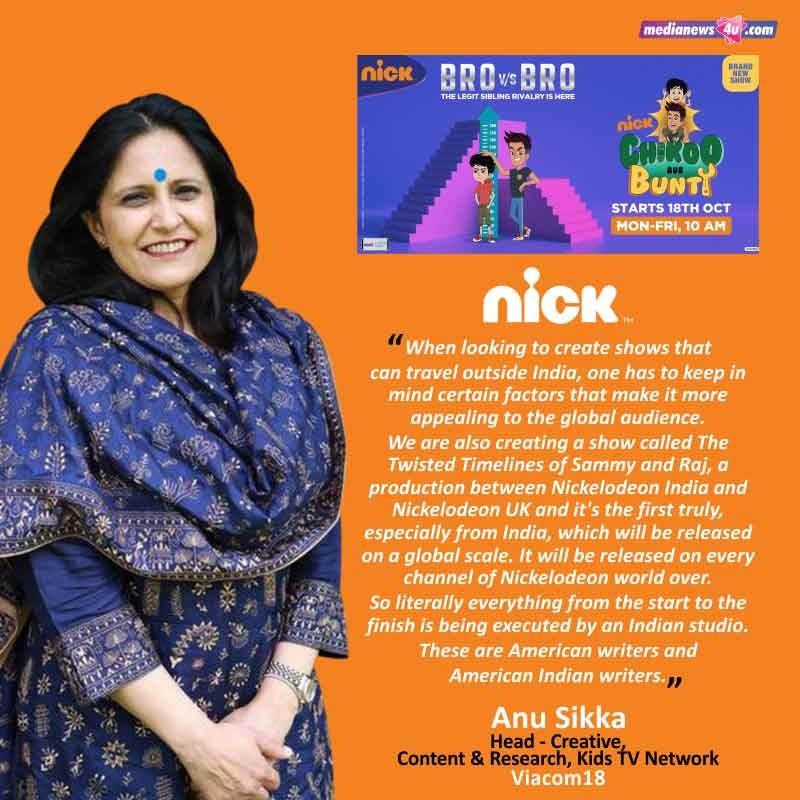 What has been the success of Kids Choice Awards and Kid’s Merchandise?

We have been doing Kids choice awards for six years now. Every year, we made it bigger and bigger in terms of its scale. Last year, there was a big debate whether we should actually go out and do it or not, because of the lockdown. But we actually managed to do it digitally and it went exceptionally well. As a matter of fact, the number of entries that we got last year was far higher than what we had received in the previous years. So that’s something building. It’s something which is doing exceptionally well for us and is getting more and more popular. One of the best signs of its growing popularity is that today celebrities directly approach us to be a part of the award show because this is what the uniqueness is. It’s extremely heartening to see celebrities coming forward and saying, Yeah, my kids love it and I want to be I definitely want to be part of an award show, which is totally, totally governed by or is done from the point of view of children. And we just hope that the situation allows us to continue making it bigger and bigger, and hopefully, if not this year, but definitely probably next year, we will back to doing an on-ground event the way we have been doing it before pandemic. 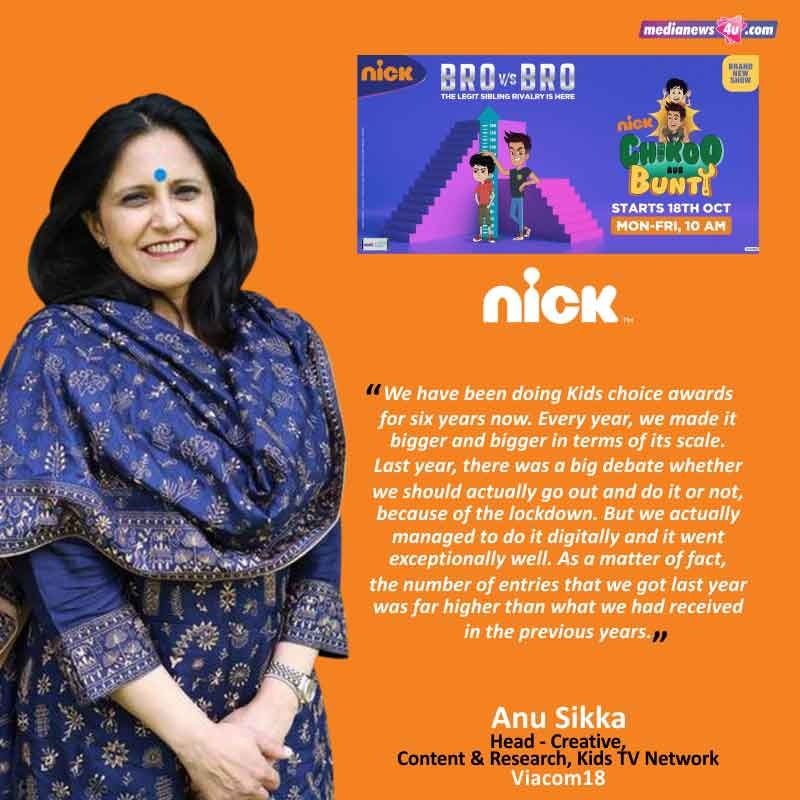 How is content scheduled on the channel to keep your viewers happy and retain the No 1 position in this genre?

We’ve been number one for the eighth consecutive year. We have four to five very strong shows and kids tend to love to repeat watch animation. That’s the beauty of animation that it has a massive repeat value. We have always loved to play content in big blocks and not just 30 minutes slots.  Over the weekends, we have movies which the kids simply love. We have about close to 40+ television movies which are based Motu Patlu and Shiva. We also have Rudra which does exceptionally well for us. When we see an opportunity, we also do movie marathons. At times, during vacations, we run movie marathons even during the weekdays. This is how we ensure maximum stickiness to the channel. Kids tend to watch the content as much as they can and more especially during their free time and it is during this time that we ensure that our most popular and their favourite shows are playing during those time slots.

Chennai: Sun TV Network has entered the Marathi Entertainment Television space with the launch of Sun Marathi. The Channel went...

Is Invesco arm twisting Punit Goenka for refusing its merger deal with a Strategic Group?

Consumers keep trust towards the brand and not on the celebrities featuring in ads: AD Padmasingh Issac, Aachi Group

Royal Classic Group is a Rs 750 crore company made in India for Indians and by an Indian: T.R Sivaram, MD, Classic Polo

Raghavendra Hunsur takes over as Business Head of Zee Kannada