by Aboli Kadam
in Exclusive, Featured
Reading Time: 4 mins read
A A

In the recent advertisement of Vimal Pan Masala we saw Sharukh Khan promoting the brand alongside Ajay Devgn. Ajay has been associated with the brand for a long time but Shah Rukh Khan joining him, lead to various kinds of reactions from the fans. Not only this we have also witnessed Salman Khan promoting Elaichi under Rajshree’s brand.

The question here is why are Bollywood A-listers getting featured in tobacco ads? When one thinks of A-list celebrities, the brands that are usually associated with the celebrities are more on lifestyle, health, and fitness, etc. Today more and more stars are endorsing tobacco ads such as Vimal, Baba Elaichi, etc.

Netizens have not taken this lying down and they are being trolled. Few of the fans were happy where for the first time they saw Ajay and Sharukh sharing the screen together, while others criticized it saying how can they promote such dangerous products, even if these pan masalas do not contain tobacco or nicotine, they surely contain areca nuts (supari) and now there are a lot of scientific evidence which prove that supari causes cancer.

Taking this issue further we had a conversation with Naresh Gupta – Co-Founder and Head Intern at The Bang in the Middle, Ashish Khazanchi, Managing Partner, Enormous Brands, and Karthik Srinivasan Communications strategy consultant

Sin categories are not easy to sell, and Pan Masala is that category. Almost 30 years ago Pan Parag built itself with help of a few cinema stars. Though the ads were more engaging, and the category was new. Since then the competition has exploded, the category has grown, and thus the race to stand out. One brand two years back even had Pierce Brosnan/Ex James Bond, wonder what happened to the brand

Personally, I feel the film stars should not endorse the elaichi brands (that’s what they advertise). I would think that it hurts their brand image, reduces fandom. Obviously, I am in minority; the stars have no qualms in endorsing the category 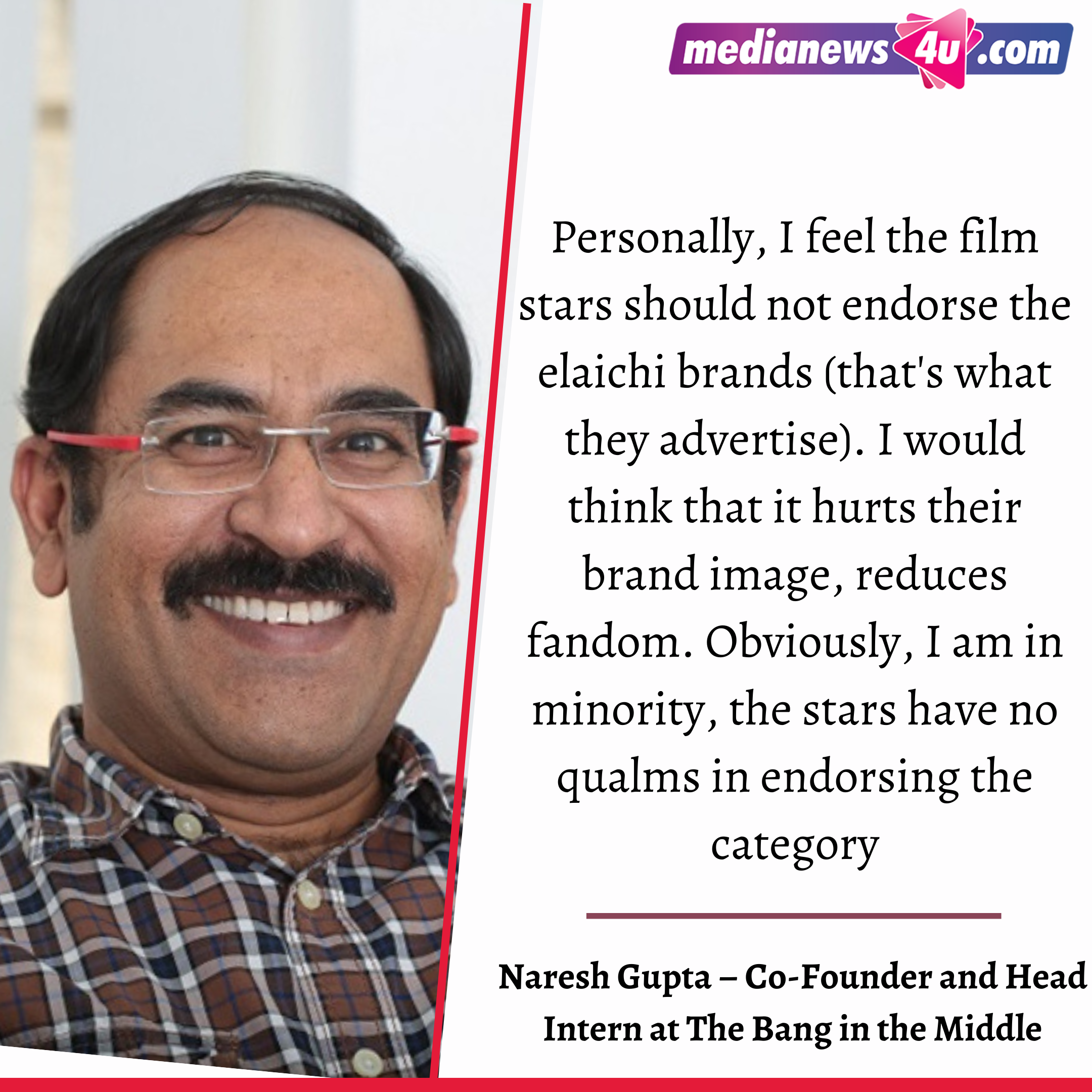 The social media jokes are something that no one bothers too much of, the noise they make on mass media is enough to drown the contra voice. Sometimes I feel that the memes and jokes actually help the brands.

If I was the manager of SRK, my advice would have been to stay away from the category. But if Salman is there, how will SRK not be there

I think superstars would certainly look like a shortcut to most advertisers in this category. There’s very little by way of differentiation in this largely impulse-driven category. Top of mind recall therefore would play a very large role in determining market shares. Dealer and distributers also would be critically important for building confidence in the brand and nothing would look more obvious than getting the biggest guys from tinsel town. The approach definitely has merit. 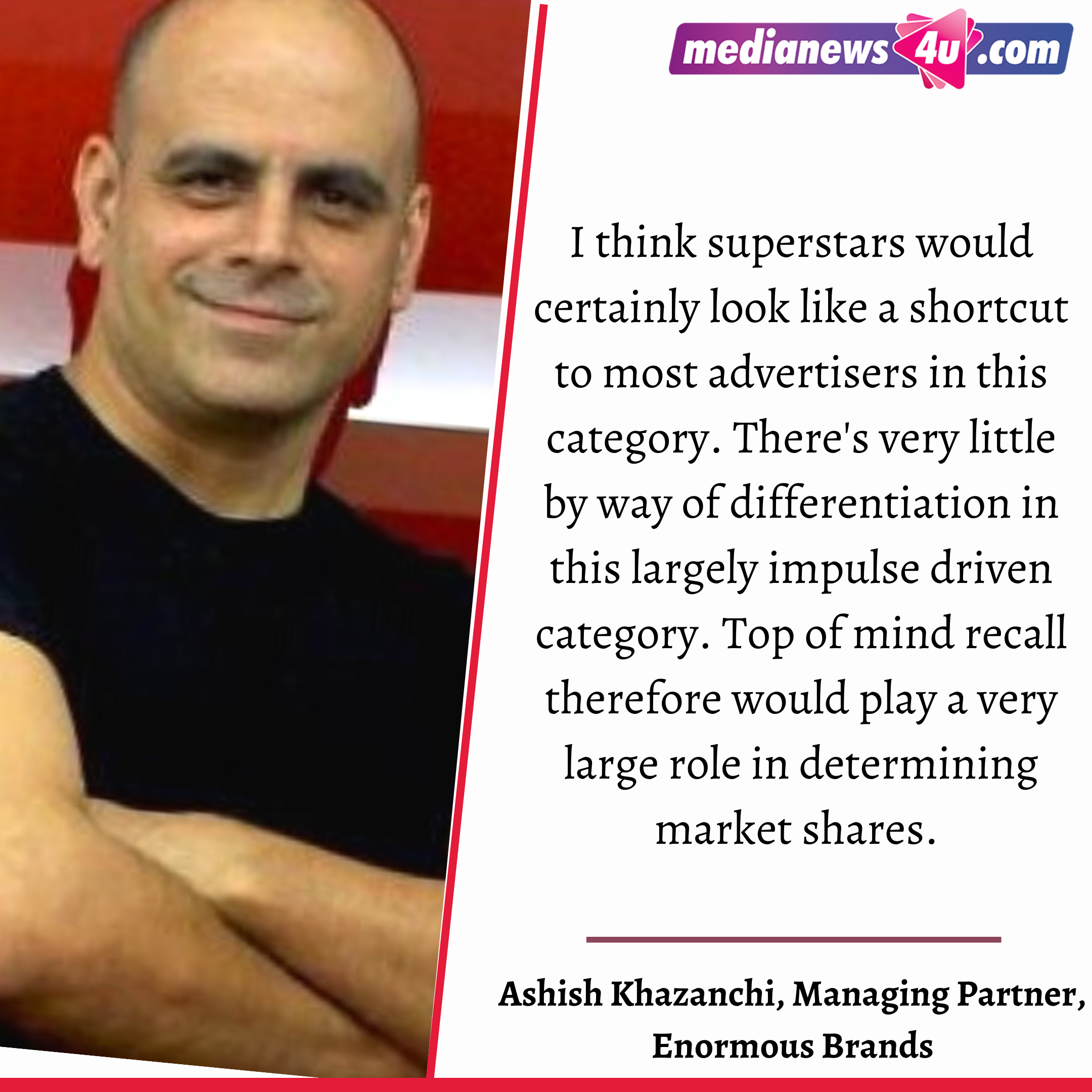 There’s a much better way to do so though by building emotional connections beyond the functional and the apparent. What emotional need does the brand fulfill best and how can that story be most amazingly told. The stars can then add to it rather than being the only thing about the brand.

The trend could be inspired by cigarette ads in the US that sued famous celebrities. The basic idea is this: “Glamorous people are smoking/chewing paan masala. I can become like them if I do too”. The effect may be more pronounced on less-educated people and those that look up to the stars for their own identity. More star power, better visibility. Double the fan base, after all.

In terms of motivation, it could be as simple as the amount of money being offered or paid.

Cigarette advertising is banned in India, while Paan Masala advertising is also heavily curtailed. Yet Paan Masala brands use the surrogate route to advertise with stars by mentioning that the products that are being advertised do not contain tobacco (they probably have a mouth freshener-equivalent in their portfolio just like how alcohol brands have a soda or an audio CD in their portfolio exclusively for such purposes).

Considering the same stars are seen to be consuming alcohol and perhaps Paan Masala in their movies (based on the scripts), the stars may be assuming these as an extension of their on-screen personality. Unless there is enough widespread criticism of such irresponsible endorsement from our leading stars, I don’t think they realize or care about the negative image. 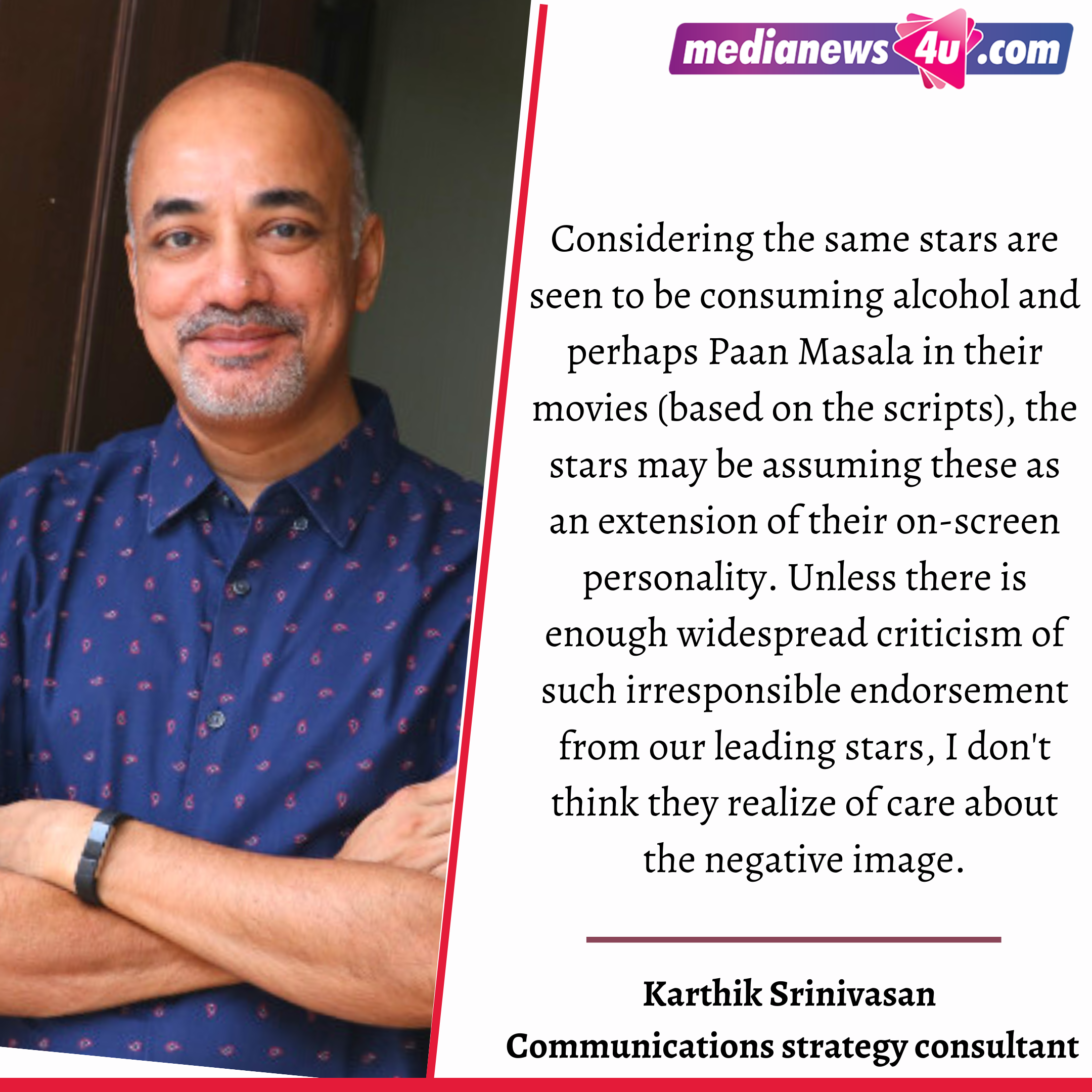 Understandably. But jokes and memes may also be seen by the stars’ PR teams as a sign of increased visibility for the stars. If they go by the ‘any publicity is good publicity, then they may assume this is all good. The need is for us to categorically denounce such irresponsible advertising by the stars beyond just making fun of it. If we do, perhaps then the negative tonality of the feedback may get the stars to reconsider their decision.

There is precedence’s. Virat Kohli refusing to extend his contract with Pepsi is a starting point of sorts. Quite a few South stars have openly refused to endorse either Cola or any alcohol/paan masala brands specifically referring to the damage such promos could do to young minds.

One needs to conduct continuous marketing analytics in real-time to understand which engagements across every channel are driving the greatest impact for better customer experiences.

Here are a few of the social media trolling,