Mumbai: ZEE5 has witnessed exponential growth in the last year with more than 75+ Originals premiering on the platform across languages and genres. The platform has also successfully acquired blockbuster films, launched India’s first and only fiction gamification ZEE5 Super Family (ZSF), announced big tie-ups with production houses, telcos, Smart TV brands and over and above this enhanced the UI to ensure better user experience.

The platform premiered some reverberating original stories which earned audience appreciation and multiple awards this season. Adding to this mix, they are now raising the bar higher with shows like The Chargesheet: Innocent or Guilty,  Rangbaaz Phirse, Ragini MMS Returns Season 2, Karoline Kamakshi (Telugu Series) and the direct to digital premiere of the film Line of Descent to name a few

The December Calendar launch was a glitzy event with the starcast of various shows being present.

The evening started with Aparna Acharekar, Programming Head, ZEE5 India addressing the guests and announcing that the platform has initiated a welfare fund for the army as a gesture to salute our heroes. She then personally called upon stage a special guest,  Lt. Colonel Sundeep Sen who was part of the NSG Commandos who were called upon to take charge of the situation during the 26/11 attack.

Also,  present was producer Abhimanyu Singh, Contiloe Pictures and actors Arjan Bajwa & Arjun Bijlani who are part of the upcoming ZEE5 series The Siege: 26/11 slated to release, early next year.

The evening then moved to the unveiling of the calendar AV in the presence of the eclectic cast Jimmy Sheirgill, Sharad Kelkar, Sushant Singh, Neeraj Kabi, Arunoday Singh, Shiv Panditt, Tridha Choudhury, Varun Sood, Divya Agarwal, Giorgia Adriani amongst others.

Also, present was CEO Sunburn, Karan Singh and Indian music producer and DJ, Anish Sood and from the Sunburn Festival which is taking place in Goa on 27 December’19 and will be live streamed exclusively on ZEE5. 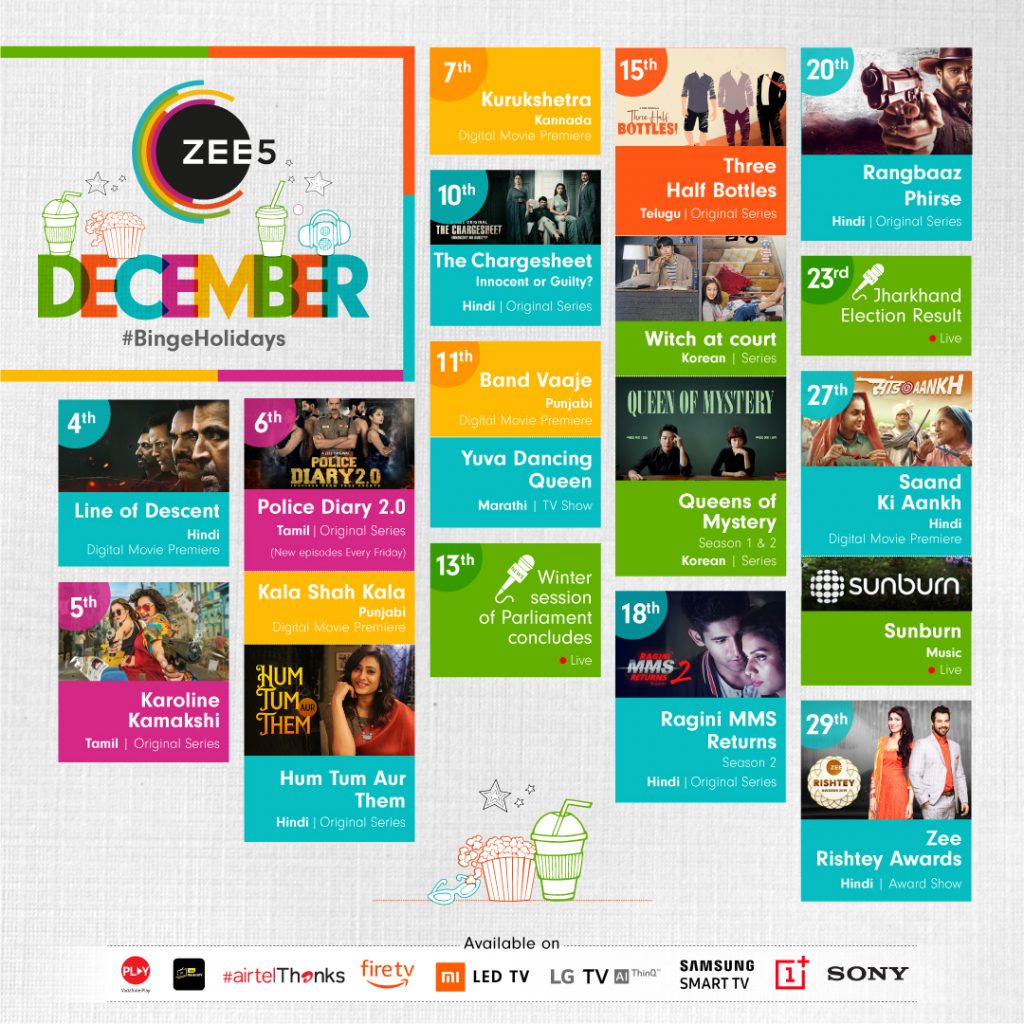 Tim Davie, the present CEO of BBC Studios, has been appointed as the 17th director-general of the BBC, taking over...

Mumbai: Ram Madhvani began his journey in the Indian film industry with the hit Neerja- the Hindi film was nominated...

The ‘Be Vocal for Local’ initiative is aimed at increasing employment opportunity while the country prepares to get back to its feet: Karan Shah, Director, Society Tea

Finding myself & renewing myself: Mitchelle Rozario Jansen, WATConsult in Beyond #WFH

Taneira has always stood for handwoven products from the Weavers of India and we will strengthen our endeavours to bring the best of India under one roof: Raghuvar Seth, Taneira in Back to Business