The dream run for Doordarshan in the GEC category has come to an end as Star Plus and Dangal respectively in their categories regain their spots.

This week we see a major change in the Hindi GEC Pay-TV category as Star Plus gets back on being the leader with 794 mn impressions according to the television viewership data released by BARC India for week 18.Sony SAB on the 2nd spot with 750mn impressions followed by DD National on the 3rd spot with 648mn impressions.

Dangal this week has defeated DD national with a huge margin. DD National on the back of Ramayana was leading the charts has now slipped to the third spot followed by Big Magic on the 2nd spot. DD National getting down to the 3rd spot and DD Bharati this week too hasn’t shown any growth and is still in the 4th position. For the 5th and 6th positions, we have Star Plus and Sony SAB. Star Utsav moves up to 7th spot while for the 8th spot we have Colors. The last two spots are secured by Sony Pal and Sony Entertainment Television. 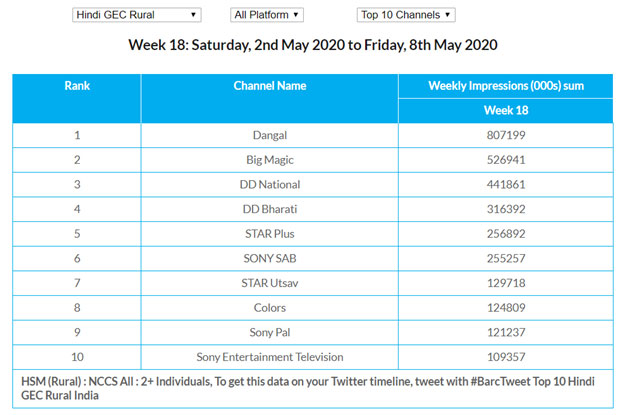 Star Plus leads the Hindi GEC Urban category too followed by Sony SAB on the 2nd spot, the undisputed leader DD National gets down to the 3rd spot while DD Bharati secures the 4th spot. For the 5th and 6th spots, we have Sony Entertainment Television and Colors. Dangal gets down to the 7th spot, while Star Utsav, Big Magic, and &TV are the last 3 contenders in this category. 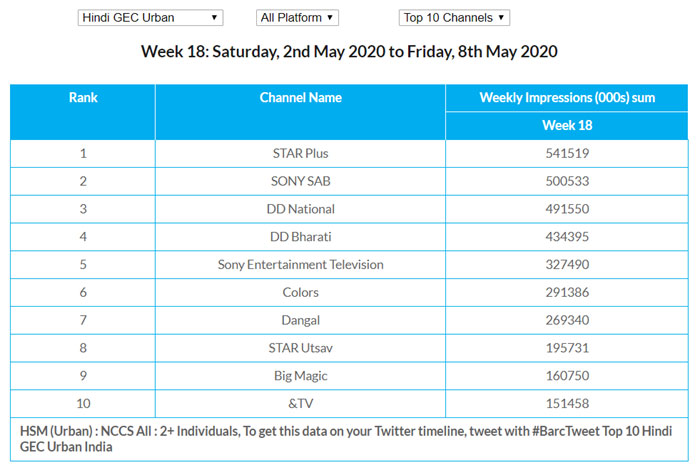