The Honorable Prime Minister, in his recent national address said that Covid-19 crisis has taught India the importance of local manufacturing and supply chains and that it is time to be vocal about local. He said the definition of self-reliance had undergone a change in the globalized world and stressed that it’s not the same as being self-centered. “India’s culture considers the world as one family, and progress in India is part of, and also contributes to, progress in the whole world,” he said. “The world trusts that India has a lot to contribute towards the development of entire humanity.”

We at MediaNews4u have spoken to people from various sectors, startups, and brand consultants to understand as to what how they have interpreted the term ‘Be Vocal for Local’.

‘Be Vocal for local ‘as a phrase will be seen as per the lens that one wants to see it in.

Companies that have their origin in India will obviously see a lot more value in underlining their ‘swadeshi’ credentials than others will. The fact that they have grown and been nurtured, trusted, and used by all of us, will obviously work to their advantage. This is something that they would want to, and should, leverage.

I would like to see ‘vocal for local’ more as a continuation of the government’s ‘Make in India’ program, inviting MNCs to manufacture in India. In this light, usage of most so-called ‘foreign’ brands be being vocal for local. Indeed, who can say that brands like Maggie, Suzuki, Lux etc. are less Indian than their swadeshi counterparts?

In fact, being vocal for local should be a call of encouragement to all corporates who source locally, use local talent, manufacture locally, use local distribution channels etc. This would ensure usage of local talent, local channels and thus stimulate the so-called local or rather the micro economy that forms the backbone of our countless cities, towns, and villages. 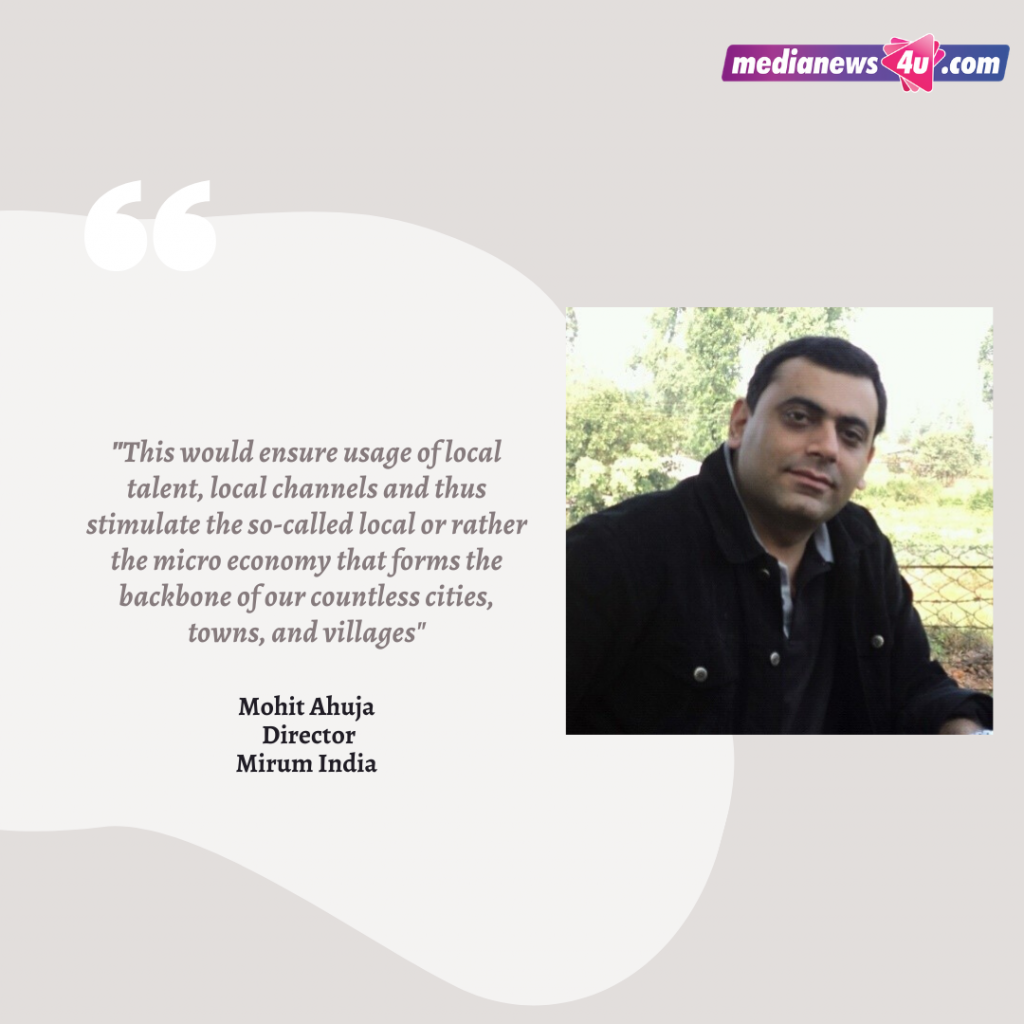 The ‘Vocal for Local’ war cry is the business equivalent of ‘Mera Bharat Mahaan’. It’s not a new strategy, Gandhiji called it the Swadeshi movement. Even that time, the call out made to the Indian consumer to buy from Indian companies, was not on the back of economic rationale but a patriotic one. Trump calls it ‘America First’. So what is means for brands of Indian origin is to ramp up their ‘Dharti Putra/Putri’ imagery and appeal to the patriot inside the consumer. And that is what agencies will front the communication with. Build the Indian backstory of the brands. I see even brands of international origin helping Indian small scale industries and trying to build narratives out of that. Vocal for local will further push agencies regional marketing agenda which will include building language capabilities and hiring regional experts. Since inception, Bobble AI has challenged the status quo and refuted the dominance of Videshi players. ‘Vocal for Local’ and ‘Building Atmanirbhar Bharat’ is about channelling India’s strengths and should not be misconstrued as protectionism. India as a country is diverse and produces one of the best tech experts and minds in the world. We at Bobble are all about Swadesh – our pedigree of tech products is a validation that we understand India, its communication challenges and requirements. We are committed to empower the Next Billion by making their communication personalized, expressive and smarter with in-house built technologies around Input Method Editors including Keyboard, Voice, Languages, Content, etc. Our Indic Keyboard is one of the highest-rated on both Google Play store and iOS, has over 70+ languages and reaches to 25 million + users. 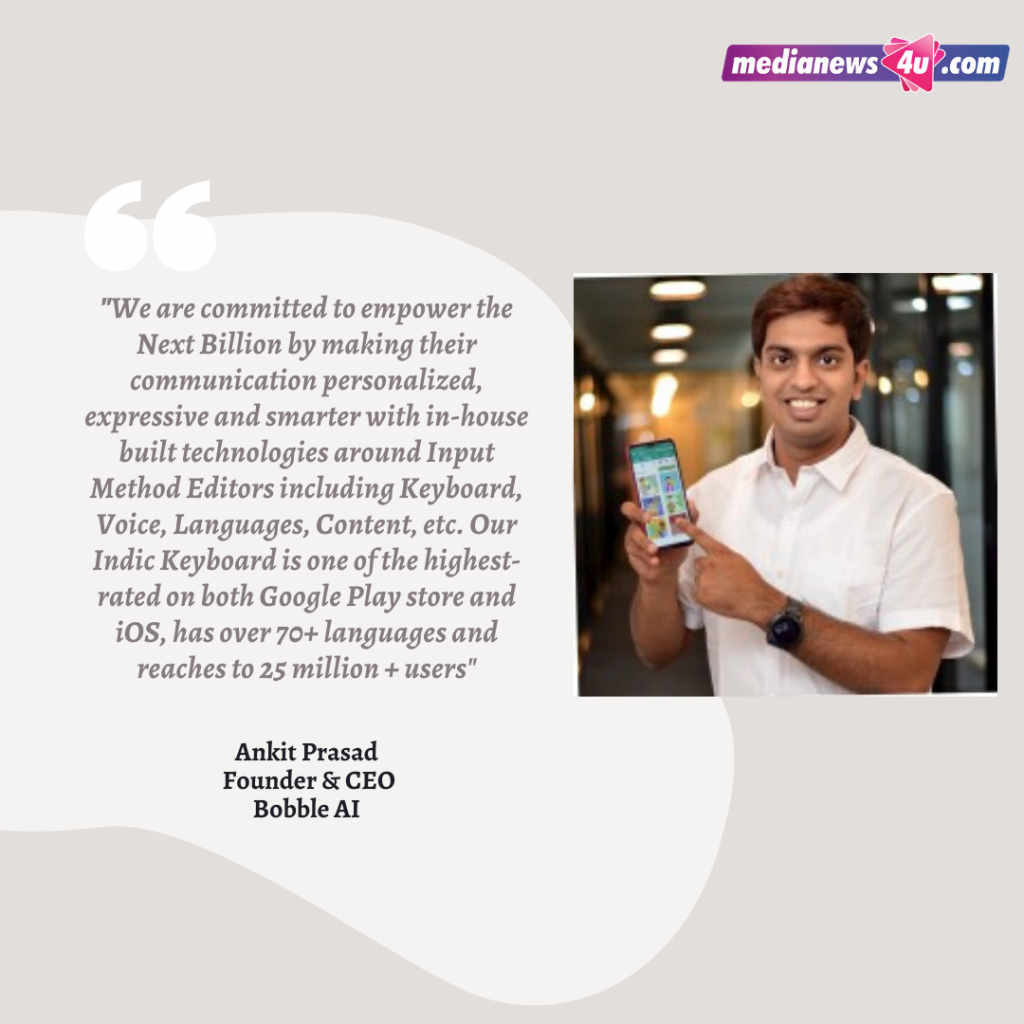 The term has been well thought through! It resonates extremely well with its purpose of being a call to action. There might be a measure of ambiguity to what it refers to, a MNC supporting local jobs, or the local MNC or the local brand, or the local store, but it certainly does not erode its message of boosting demand through local initiatives.

Some of the most famous brands in India are responsible for the beginning of branding in India. These may not be your local brands, born and bred here, but foreign ones like Nestle’s Maggi or Coca Cola, present since the days of liberalization and now Indian in spirit. While Swadeshi brands may prove to be a challenge, until a sustained marketing push makes its way through and production capabilities rival their global competitors, consumers will be spoilt for choice. 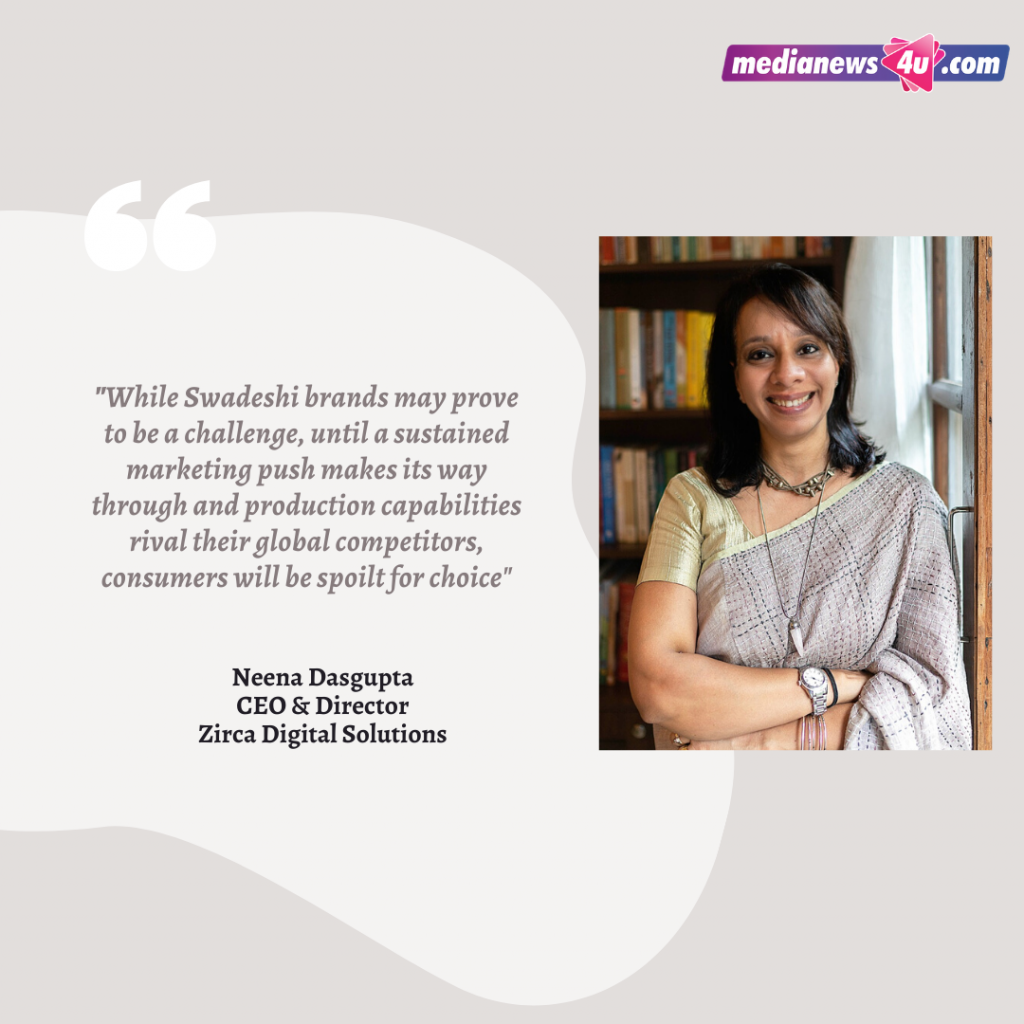 There has certainly been an increase in the curiosity towards Swadeshi Brands. Whether this amounts to a shift in consumer behaviour and preferring Swadeshi brands over foreign brands that has yet to be seen.