Share Share ShareShare
New Delhi: Govt of India has issued a notification bringing online films and audio-visual programmes & online news and current affairs content under the Ministry of Information and Broadcasting. Notification reveals that the President has approved an amendment in Government of India Allocation of Business Rules to this effect.

The development was announced in a gazette notification on Wednesday. The notification issued by Cabinet Secretory dated 9th November 2020 staled that the President has signed the order to include online films, digital news and current affairs content under the purview of the I&B Ministry.

The notification, signed by President Ram Nath Kovind, said the decision has been taken in exercise of the powers conferred by clause (3) of article 77 of the Constitution, by amending the Government of India (Allocation of Business) Rules, 1961 and it will come into effect immediately.

With this, the Ministry of Information and Broadcasting headed by Union Minister Prakash Javadekar will be entrusted with the power to regulate policies related to news, audio, visual contents and films available on online platforms. 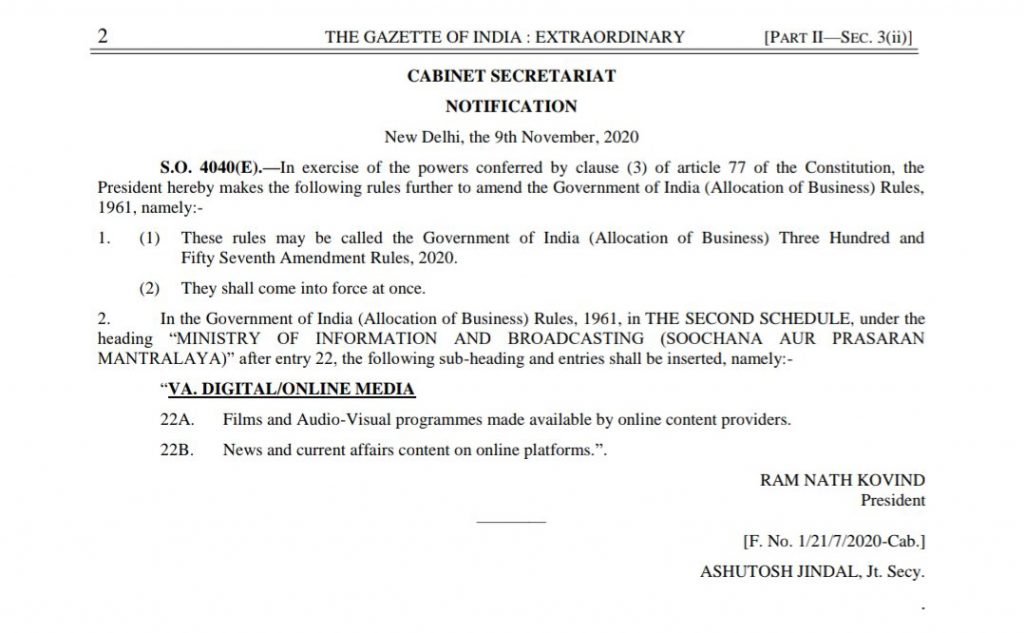 N. Chandramouli, CEO, TRA Research said “When any sector comes under regulation it becomes a limitation for that sector, but much depends on the heavy or light nature of the regulatory authority, which in turn depends on the type of authority that exists at that particular point in time. This can limit the type of content that is allowed, and anything that does not appeal to the existing authority may be censored. I am in favour of a Self-Regulatory-Authority or SRA, which is an independent body of industry professionals who take action against any unwarranted content of the type that ASCI is. OTT is becoming the dominant access to content, and it is important that no government body alone prescribes which content should be shown. It not only limits creative freedom, which in turn affects audience engagement with the OTT platform, but regulatory decisions can be subjective and controversial.”
Tags: Information and Broadcasting MinistryPrakash Javadekar