Regardless of whether you call it social distancing, quarantining or retreating to a safe place, heading home amid concerns about the novel coronavirus (COVID-19) is bound to affect media consumption habits. In fact, staying put in our homes can lead to almost a 60% increase in the amount of content we watch in some cases and potentially more depending on the reasons. Considering that consumers around the globe are already leaning into the growing array of content options and channels, a 60% increase is significant.

Media consumption in the U.S. is already at historical highs. As reported in the most recent Nielsen Total Audience report, Americans are already spending just shy of 12 hours each day with media platforms. What’s more, three-fourths of U.S. consumers are broadening their media options with streaming subscriptions and TV-connected devices. 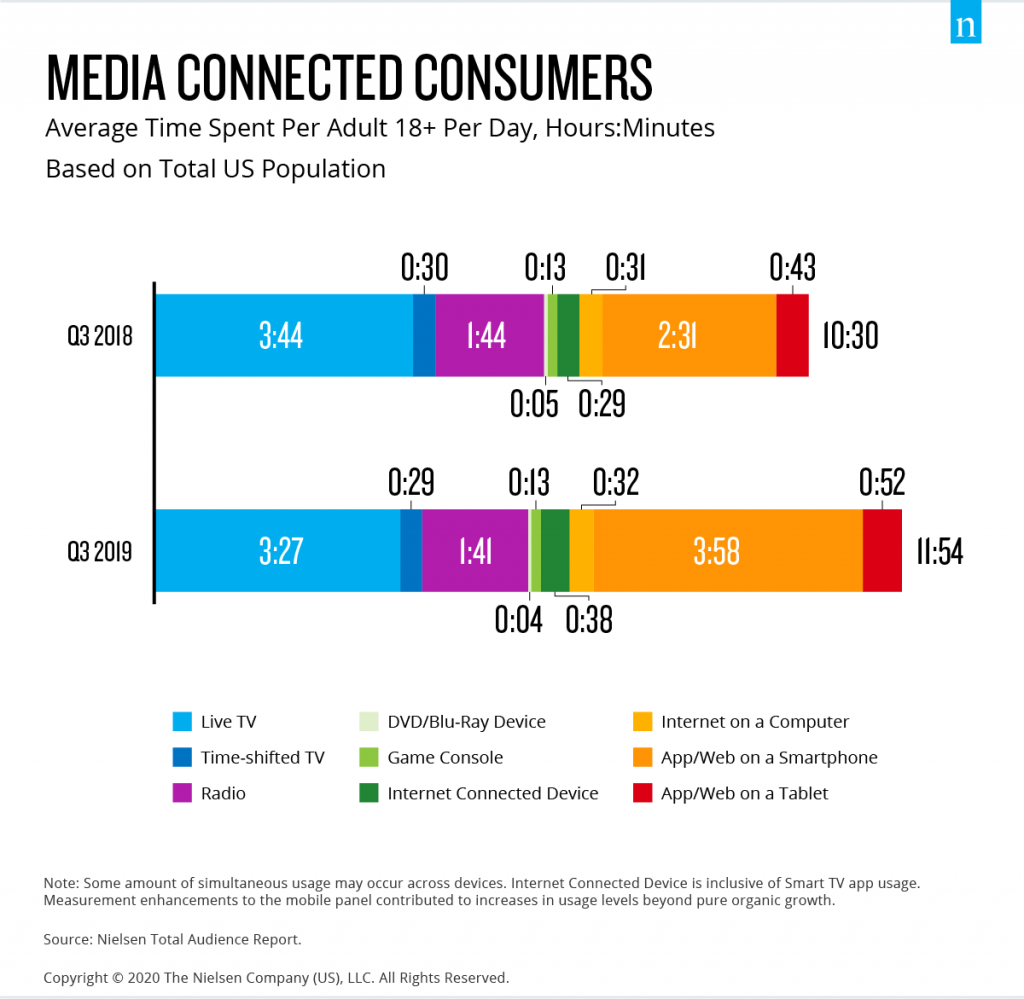 During crisis events, however, be it snowstorms, hurricanes or a global pandemic, media users ramp up their media consumption to stay informed, kill time, find solace and stay in touch with others. They also stock their pantries with the necessary food and supplies to help get them through these trying times.

For insight into how consumers adjust during crisis situations, Nielsen analyzed total TV usage (TUT) data during two major crises in recent history: during Hurricane Harvey in 2017 and during a major snowstorm in January 2016. Not surprisingly, TUT levels increased significantly during both occasions.

In August 2017, Hurricane Harvey hit Houston, Texas. During the impacted period, a Nielsen analysis of that market found a 56% increase of TUT use compared with the preceding period and 40% higher than the period following the storm. 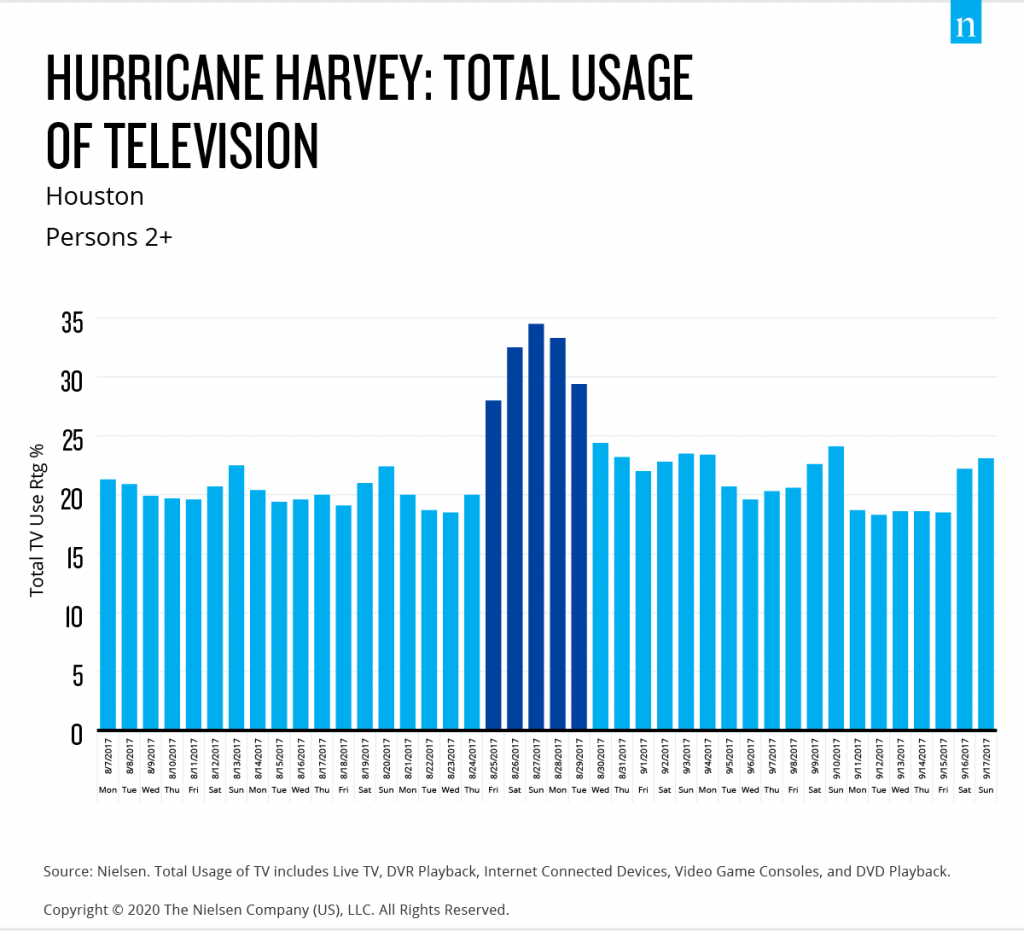 Similarly, over the weekend of Jan 23, 2016, a severe snowstorm dropped more than two feet of snow in the New York area, grinding activity in the market to a near halt. Comparing the Saturday of the snow event to the prior Saturday in the New York market, TUT usage was 45% higher. That same Saturday was also 49% higher than the Saturday following the blizzard.

So what were consumers watching as they stayed inside? We found that consumers gravitated to feature films, news and general format programming. The analysis also found a 61% increase in streaming via the TV. Consumers stayed warm indoors binging content, watching movies and keeping up with news from the outside. 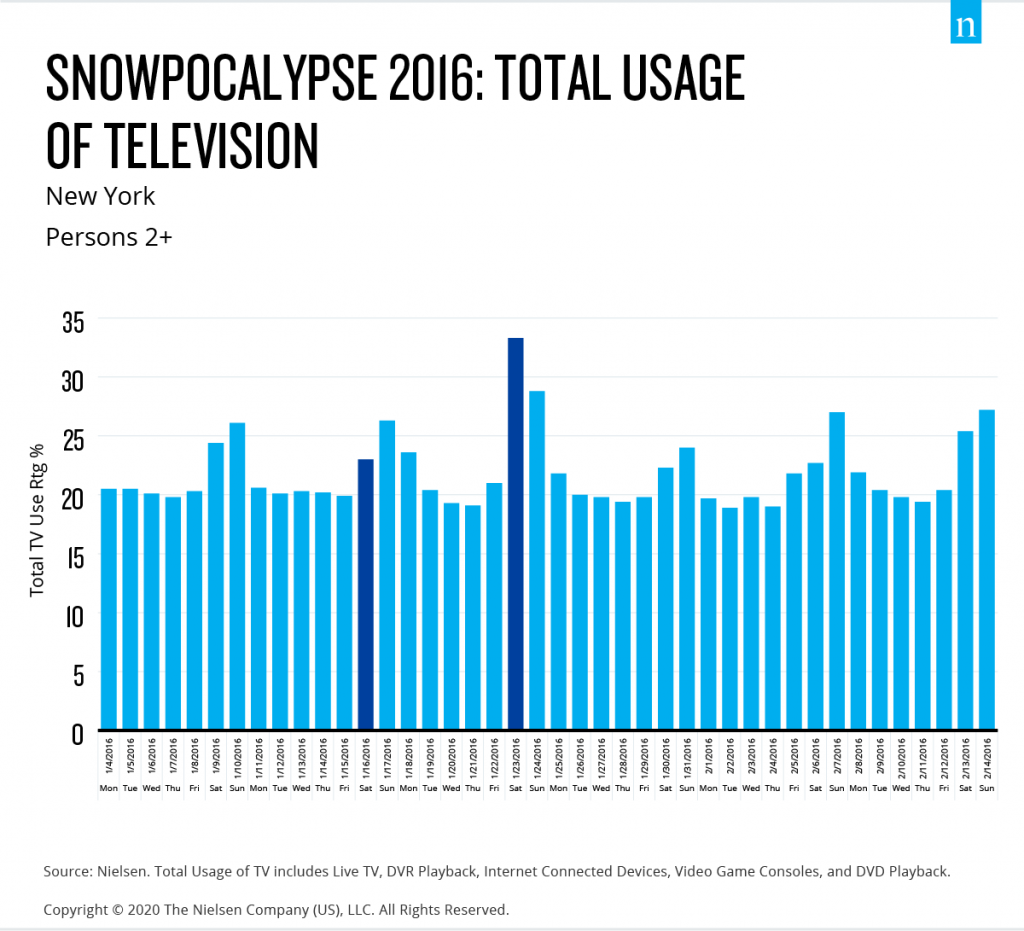 South Korea and Italy: a sample of viewing during covid-19

An analysis covering the global regions that have been impacted by COVID-19 found similar behaviors. In South Korea, for example, there was an increase in television viewing in the weeks after the first reportings of COVID-19 in early February. Comparing persons TV usage levels from the second week of February to the fourth week when there was a surge in the virus, the analysis noted a 17% increase in TV viewing—an increase of approximately 1.2 million viewers. During that same interval in 2019, it was just 1%. 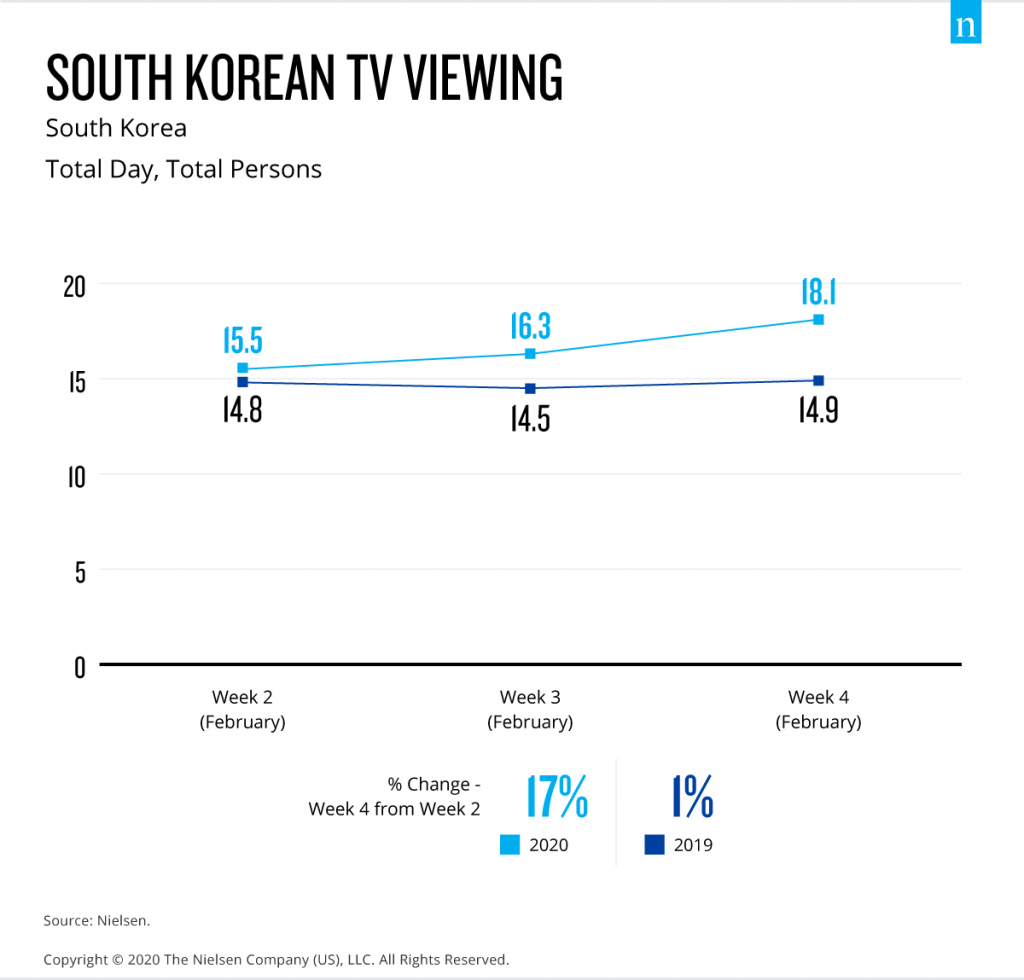 And in Italy it was reported by the Italian Joint Industry Committee, Auditel that during the last week of February, compared to the previous  week, there was a 6.5% increase in TV viewing and almost 12% more in the Lombardy region of the country, which was, subsequently, the hardest hit area so far. The increase has been driven by both news consumption as well as a consumer move to stay indoors.

While technology has fragmented the media landscape, it also has driven many companies to encourage remote commuting when possible. In many cases this has cut down overhead office costs, allowed for flexible work schedules, drawn from a more tech-savvy talent pool and, in the case of COVID-19 and unforeseen events alike, given companies in affected regions the ability to urge associates to work from home. In doing so, these companies have been at the forefront of social distancing, as urged by the CDC, while at the same time, given them an ability to keep operating without much disruption in production continuity.

As COVID-19 continues to spread in the U.S. and more companies allow and enact policies for work to be done virtually, the viewing behavior for employees working in the confines of their own homes could drive even greater media usage.

Beyond TV and media connectivity, consumers all over the world are using social media to help drive the conversation as well as to stay connected, informed and opinionated. According to Nielsen’s Social Content Ratings data, a snapshot from January through February 2020 showed that at its peak the social conversation mentioning either “coronavirus” or “COVID-19,” there were 110,000 TV-related Tweets mentioning these two keywords. 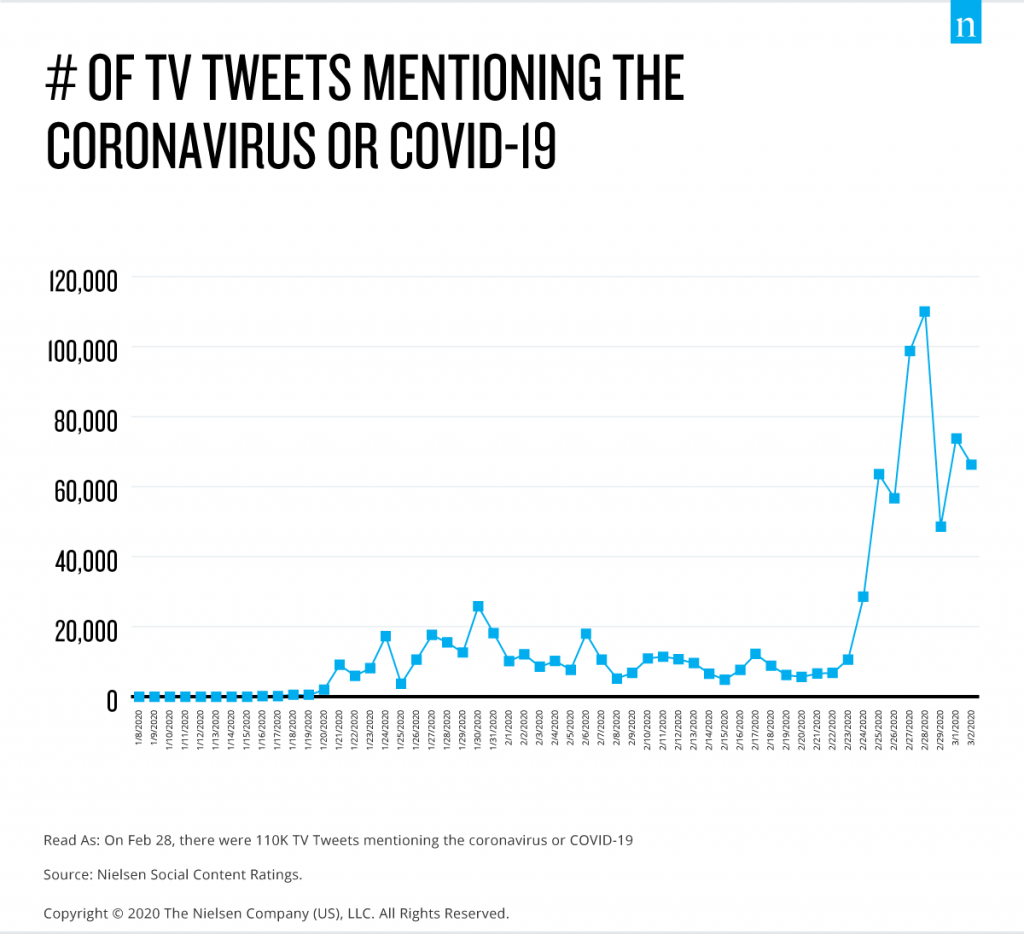 As COVID-19 continues to spread, this serious health threat has already shaken world markets and, no doubt, will affect the media ecosystem. Understanding, and potentially hedging ad and media investments could help buoy any shrinking margins, build awareness for public health messages and maybe even get consumers’ worried minds off a threat through the power of entertainment.

We expect our H2 to be far more profitable than that of last year: Sudipta Suri, Radio Mirchi

Radio Mirchi without a doubt is one of the biggest and most successful private radio networks. The Covid-19 pandemic has...

Omnicom Media Group’s report on Covid-19 Gearing up for the Festive Season is an in-depth report that provides insights into...

What distinguishes us from other agencies is our agility and speed: Tejender Sharma, Art-E Mediatech