Mumbai: The Capgemini Research Institute has found that consumers increasingly prefer to interact with bots rather than humans, especially when it comes to researching products, learning about new services or following up on post-purchase customer service queries. According to a study launched today, nearly 70%say they will progressively replace visits to a store or bank with their voice assistant within three years’ time.

The “Smart Talk: How organizations and consumers are embracing voice and chat assistants” report – which surveyed over 12,000 consumers[1]who use voice/chat assistants and 1,000 business executives – was commissioned to understand both consumer and business leaders’ perspectives on conversational interfaces uptake, implementation and satisfaction, building on the 2017 research Capgemini conducted into voice assistants. The new study demonstrates the pace of change over the last 12-24 months: 40% of those now using voice assistants have started doing so in the last year.

Businesses are also seeing the benefits, with many considering conversational assistants to be crucial for customer engagement, and the overall customer experience. Over three-quarters of businesses (76%) said they have realized quantifiable benefits from voice or chat assistant initiatives, and 58% said that those benefits had met or exceeded their expectations. Benefits included a more than 20% reduction in customer service cost, and a more than 20% increase of consumers using digital assistants.

However, while the business and user advantages are widely understood, the report found that actual roll out is lagging behind enthusiasm and demand. According to the study’s findings, fewer than 50% of the top 100 players in automotive, consumer products and retail, and banking and insurance have voice assistants, and the same is true of chat.

A comparison from 2017 to 2019 shows an increase in use of voice assistants by existing consumers for various purposes, including buying products like groceries or home care (an increase from 35% to 53%), customer service interactions post purchase (an increase from 37% to 52%), and making payments for products or services (anincrease from 28% to 48%).

The report also found that consumers have increasingly praised the ability of conversational assistants to provide a better experience. In 2017, 61% of consumers expressed their satisfaction in using a voice-based personal assistant like Google Assistant or Siri on their smartphones; this number rose to 72% in 2019. Moreover, in 2017, 46% of consumers were satisfied with using a voice-based speaker device like Google Home or Amazon Echo, and 44% with a voice and screen-based voice assistant (not phones) like Amazon Echo Show and Amazon Fire TV; these numbers rose to 64% and 57% in 2019, respectively. 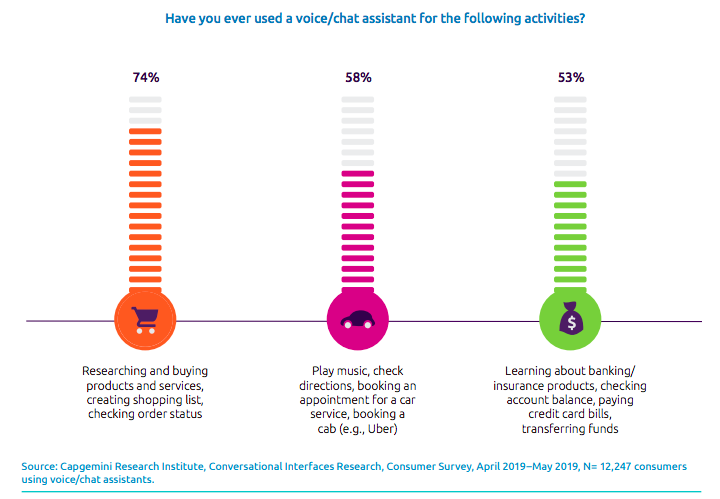 Convenience and personalization will drive conversational assistants into the mainstream

Once trust is established, consumers are willing to go to the next level of engagement, including higher levels of personalization, emotional connection, and value .Over two-thirds (68%) of consumers said a voice assistant allows for multi-tasking and accomplishing tasks hands-free, and 59% say that chat assistants keep improving personalization over time. The study also found that people now want more human-like engagement with their assistants: 58% want to personalize their voice assistant, 55% want to give it a name and 53% want to define its personality. 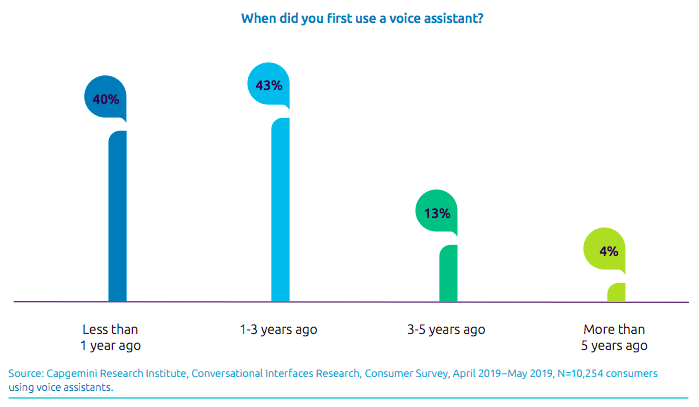 “This research establishes that conversational assistants are the future of customer interactions, valued by consumers for their convenience and by companies for the operational efficiencies they enable. Compared to our study released in early 2018, a much higher proportion of consumers now foresee voice assistants as their first choice within the next three years. In the meantime, the expectations of customers are evolving as they progressively use the technology,” said Mark Taylor, Head of Customer Engagement at Capgemini Invent. “Privacy and security also remain paramount. Since our last research, it seems there has been little change in consumer concerns about how voice assistants affect privacy and data security. Companies must do more to address both these concerns and consumers’ increasing expectations, as conversational commerce increasingly moves into the mainstream.”

Stan Sthanunathan, Executive Vice President at Unilever echoes the need for businesses to adopt voice assistants: “The biggest experience that we’ve had is to not look at conversational interfaces as a cure for all the problems that you have, but instead to use them to augment human intelligence. This makes human intelligence a lot more productive. Voice or chat bots can communicate with multiple people simultaneously. They therefore help in reducing the amount of stress and strain on our human agents who are responding. These interfaces eliminate anywhere between 20% and 30% of issues reaching the human agents because they are answered then and there. And even when the issue is guided to a human being, it is actually a lot more purposeful.”

MTV Insights Studio presents ‘Mera Bharat Amazeballs’, the most extensive study into the mindset and behaviour of India’s youth

HistoryTV18 premiers a one-hour special documentary ‘Kumbh: Among the Seekers on 29th January 2020

Mumbai: Adding to its rich offering of Indian originals, HistoryTV18 presents a one-hour special about the world’s most spectacular human gathering, the Kumbh Mela. The...