DD National, the most watched channel across India: BARC

DD National has shown the way to many private GECs by bringing back evergreen TV classics, Ramayana and Mahabharata on TV.

According to the third weekly edition of BARC and Nielsen’s report on TV + Smartphone Consumption during the crisis, DD National was the most-watched TV channel across India.

Ramayana in a span of one week grew 454X times and Mahabharat in the same week grew 365X times. 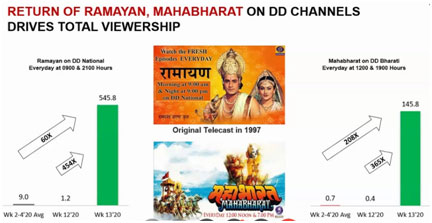 Other shows such as Shaktimaan on DD National, too proved to be a huge success as it grew 52Xtimes in week 13, Byomkesh Bakshiby 11X and ShrimanShrimati by 2.7X 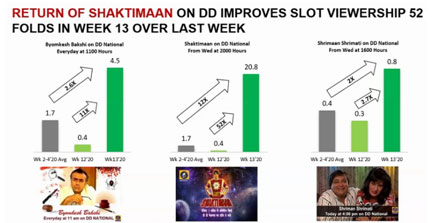 Other shows like Dekh Bhai Dekh, Circus and Buniyaad too witnessed a major increase in Week 13 and improved viewership by 8 folds in week 13 over the pre- Covid19 period.