Mumbai: The ongoing TRP Scam that was largely implicating News genre until recent times, seems to have spilled over to other high revenue genres that are known for their exorbitant advertising spot rates as OpIndia claims that parts of the Forensic Report that was conducted by BARC in July 2020, potentially implicates several other channels.

It may be noted that Mumbai Police in its recent press conference, alleged that they had ample evidence against Republic TV and Arnab Goswami in the fake TRP caseciting above mentioned ‘forensic report’. Moreover, the Joint Commissioner of Mumbai Police reportedly said that the Forensic auditors appointed by BARC analysed the data of 44 weeks in their audit.

However, OPIndia’s report uncovers the existence of rigging practices even before the launch of Republic TV. The online platform cited the Digital Forensic analysis reportthat revealed an email exchange between the top management of BARC and the BARC researcheras evidence, where the latter was refusing to include the name of Sony Six and the top management was insisting him to ensure thatSony Sixfeatures in the list of top channels.

In his mail written by a senior official of BARC to the researcher, insists that Sony Six needs to be included in the Alpha club report. The ‘Alpha Club Report’ was launched as an offering to its subscribers by BARC in November 2015.

Whereas, The BARC researcher vehemently refuses to include Sony Six in the Alpha Report, snubbing the senior officers’ suggestion and categorically says that he cannot compromise the integrity of the research. The researcher also points out that including Sony Six in the Alpha Report would compromise the ‘Research Sanctity’ and he would not be comfortable doing that just because it was a “critical channel”. He further says that each channel is “equally critical” and he will not include Sony Six. 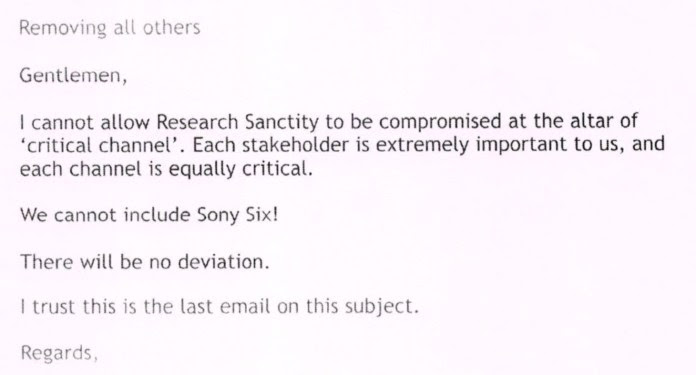 But, the subsequent response mail dated 26th May 2016 from the officials of BARC read that Sony Six has to be included since it is telecasting the IPL (Indian Premier League).

OPIndia also concluded that thisinternal email exchanges clearly point towards how BARC is internally a system that does not seem to work to present an accurate picture of TRP in the first place and is deeply open to data being rigged. MediaNews4U in its recent article questioned the fidelity of the past data released by the TV viewership measurement agency and the this revelation creates serious apprehension on BARC’s data that was used to dictate the ad rates of TV Channels across India. While the stakeholders also dole out in lakhs to subscribe the data.

Keeping aside the internal communication between BARC India’s executives, the platform also stroked the issue of conflict of interest, as the entire episode occurred in May 2016 when NP Singh who is the CEO and MD of Sony Pictures was also on the board of directors of BARC and was a Director in IBF (Indian Broadcasting Federation) that has about 60% stake in BARC itself.

MediaNews4U has reached out to SPN India for its comment.

Colors is all set to premiere the 12th season of Khatron Ke Khiladi on 2nd July and will air every...

InMobi, the content, monetization and marketing technologies solutions provider, announced a direct integration of its InMobi Exchange supply-side side platform...