Emotion is the super weapon of advertising across the diverse culture in Asia: WARC Report

“Online video has emerged as an opportunity that helps brands learn more and stay up to speed about the world around us. Nowhere is this more evident than on YouTube. Every minute, 300 hours of content are uploaded on the video sharing platform. One billion hours of content are watched on the platform every day and watch time has grown by 60% in the past year”, states report by WARC titled Brand-building at the speed of culture: The role of online video in Asia.

WARC’s meta-analysis of the winning case studies in the YouTube Works awards across Asia reveals that brand campaigns which leveraged online video performed in the marketplace as well as in the consumer’s mind space. Half the winning entries had an impact on the brand’s sales and over one quarter were successful in enhancing their market penetration. The online video has moved from being a “nice to have” to “must have” for all businesses.

As per the report, across the diverse cultures in Asia, emotion is the super weapon of advertising. Research has already established that campaigns yielding an emotional response are nine times more likely to be successful than work eliciting indifference. A study of what drives ad sharing on YouTube found that emotional ads are shared more than informational ones. Storytelling also generates positive sharing responses as it enables emotional engagement. Ads which appeal to positive emotions, such as inspiration or amusement, lead to significant sharing. 37% of the campaigns that won leveraged emotions and an identical 37% used storytelling as a creative strategy. 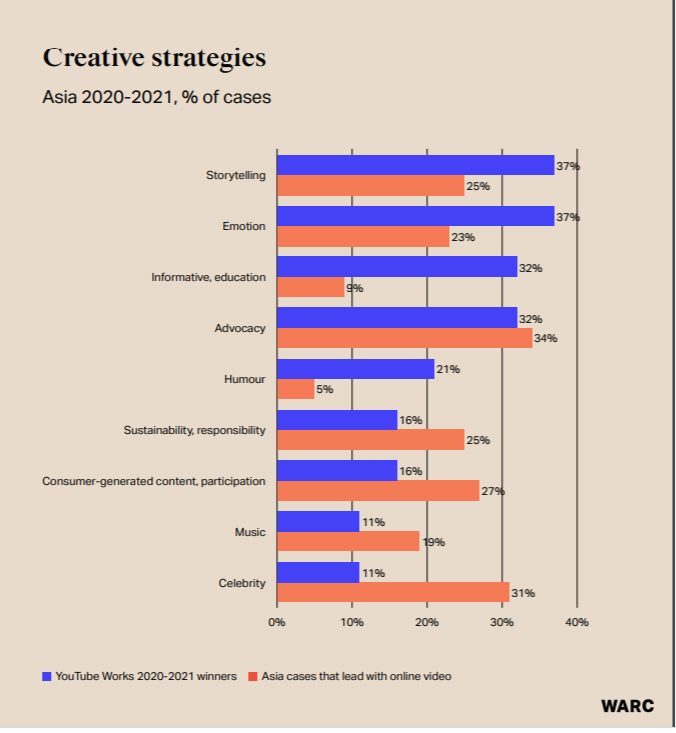 The Korean Wave, one of the most prominent subcultures to emerge out of Asia, has already made significant inroads in many parts of the world – from K-pop and Dalgona coffee, to the recent Squid Game drama, which has become a global cultural moment. As a testament to how established South Korean cultural products are in the global psyche, 26 Korean words like “hallyu” and “mukbang” were added to the Oxford English Dictionary in 2021.

This cultural lever is no longer restricted to just brands from South Korea. Using K-pop and K-drama as the spearhead, brands across the world in categories ranging from skincare to automobiles and mobile phones have ridden on Korean Wave content to heighten their engagement.

The report further stated that even across diverse cultures, some emotions are universal. Humour has proven to be an effective means of achieving the emotional connection sought by brands. Research on video content 3 launched since the beginning of the COVID crisis suggests humour evokes connection. In fact, positivity and humour are welcomed by many as light relief from the uncertainty sparked by the pandemic. 72% of consumers want brand communications on social media to be funny.

The pandemic has encouraged brands to be bolder in their use of technology. According to a survey of senior marketers worldwide, over half (53%) agree that COVID-19 has emboldened them to be “more innovative” and “more willing to try something else” in their media investments, with 53% seeking “greater agility” through digital media channels.