Famous Studios’ mission is to unlock, inspire, and nurture the imagination of storytellers: Anant Roongta

Famous Studios, A dream is all it takes to go the distance. The story of Famous Studios, standing tall as a landmark of Mumbai’s dream industry was born from a similar dream. Set up in 1946, in pre-Independence India; it was a bold foray into the world of Indian cinema and television. Over the years, it evolved into a canvas for hundreds of artists for creating masterpieces with state-of-the-art equipment and expert technicians: a turnkey content solutions provider for anything that a business or film needs. Today the studios have spread into a sprawling 110,000 sqft, to several locations across Mumbai to boost flexibility, and also to the hearts of industry folk. Famous Studios has been honored with DadasahebPhalke and the Indian Motion Picture Association’s recognition for its outstanding contribution to Indian Cinema, in addition to dozens of other accolades and awards. Yet our greatest reward remains the joy and fulfillment of those who weave a million dreams every day.

Anant Roongta, MD, Famous Studios has set an exhilarating example in his 4 years since taking over the heritage left behind by his grandfather. Anant is the grandson of J B Roongta—who needs no introduction, and who conceived and founded Asia’s first air-conditioned studios (Famous Studios) in 1946, i.e. in pre-independence India. Anant is the third-generation entrepreneur at Famous Studios and is taking forth the 75-year legacy.

Famous Studios the oldest and Asia’s first A/C studios, a journey from then to now been?

The journey has been magical, the wins, the losses have all been part of the experience over the past 75 years. For us, trust, respect, and the commitment to constantly invest in new talent and technology have been key ingredients for our success and ability to face challenges including the rapidly changing M&E ecosystem.

In the early years of Famous (the 1940s-1970s), the business focused on offering infrastructure such as air-conditioned studios, camera rental, and set construction services which at the time were considered all-inclusive offerings for producers. In addition to this, we set up a production house and produced a few feature films, and continued investment in technology.

The golden era for Famous (1970’s-2000) brought about massive opportunities. The content landscape started changing and consumers started demanding content from various sources. During this time, we set up multiple divisions. We built a film processing lab, inaugurated India’s first audio-visual post-production studio and Famous House of Animation in 1998. The studio was buzzing with new Directors, advertising agencies, production houses, and creative talent. It was truly a center where content creators mingled and brought their stories to life. Our team size grew and Famous was termed as the “Mecca of Advertising ” as over 60% of TVC content was processed in some shape or form at Famous. The new century (2000-) has been challenging. Competition has increased but staying true to our commitment, we expanded our facility and are now working with most of the M&E verticals. The main studio has now become a cultural center where in combination with film/TVC shoots, space is used for conferences, gigs, events, and art exhibitions. In 2019, we converted a large section of our property into a co-working space by the name of Famous Working Company in an effort to attract the next generation of creative talent to use the space as an all-inclusive service where they can work, create and deliver content. Our post-production facility has moved on to another location in Mumbai where we offer a 150+ strong team that works on leading technology such as Dolby Atmos, Dolby Vision, and VFX.

In addition to this, we co-produced our first-ever OTT film with OpticusInc titled “Shaadisthan” starring KirtiKulhari, Kay KayMenon, and NiveditaBhattachrya which will be available on Disney Hotstar in June this year. We are gradually building our production capabilities with the right talent to explore IP opportunities in the future.

From days of shooting on Film to slowly shifting to Digital – how has the journey been and the challenges of changing mindsets?

The journey from analog to digital doesn’t cover just cameras, it covers the entire workflow. The least of the challenges has been investing and creating workflows around this technology to suit customer requirements. The biggest challenge was changing mindsets. Initially, when RED and ARRI launched their digital cameras, most DOP’s and Directors still preferred shooting on film but as time went by, they understood the merit of shooting digital and experiencing simpler workflows. 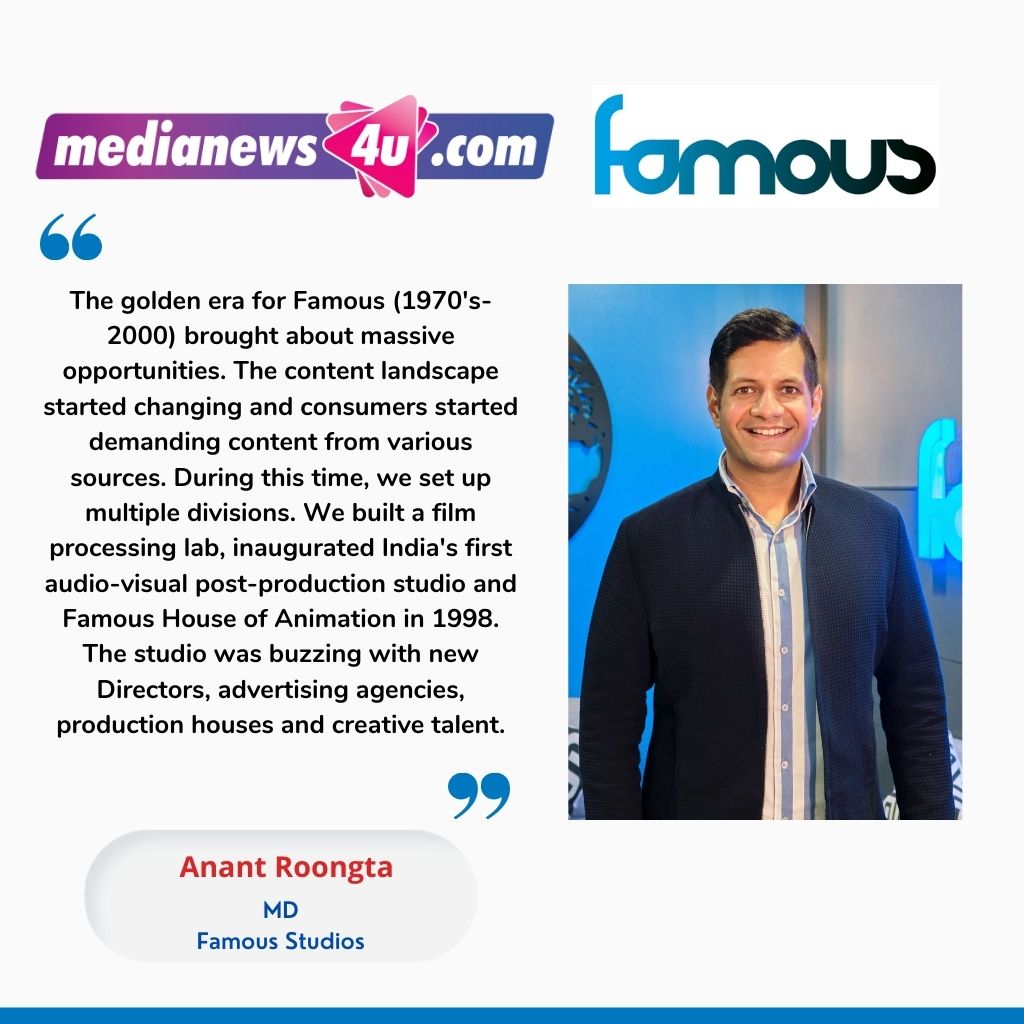 In addition to this, training and developing talent to deliver the vision of the filmmaker was a huge task. In all, this change took 2-3 years but the biggest advantage is that through digital tech, we are now able to explore ideas and deliver content in a shorter span of time. The barriers have reduced and it is possible for creative talent to weave a story in an interesting way without any heavy investments.

How has Famous kept up to the changes in the broadcast industry?

Large broadcasters have now set up their own OTT platforms such as ZEE, Viacom, and Disney. This plays a key role in our IP/content creation ambitions. We plan to set up writer rooms, weave scripts, pitch bibles and try to get them commissioned and delivered to these players.

In addition to this, our post-production studio is now set up to deliver 4K HDR and Dolby Atmos content for other producers that create content for broadcasters. We have recently delivered our post services for movies and web series that are not live on platforms such as Netflix, Hotstar, Zee5, Alt Balaji, MX Player, and Amazon Prime.

Today many Hollywood biggies come to India for VFX and animation how has that industry grown and what was the USP of these studios?

The VFX industry in India has come of age. With global players such as Framestore, Dneg and Technicolor setting up shop in India, the cross-border combination of artists has definitely helped spread work to India for some of Hollywood’s leading films. The cost advantage of mixing it up and reduced time taken to deliver projects has made this feasible. This has allowed large studios to achieve their content ambitions.

The pandemic/lockdown has given rise to innovations, what are the innovations you are seeing when it comes to Post Production and recordings?

With regard to post-production, I have always believed that the physical presence of a DOP and Director in the studio is important to ensure that the film is edited and finished in a manner most comfortable to them. However, in the lockdown, with the help of new technologies such as frame.io and Shotgun, remote approvals and WIP situations have been handled well. For example, colour grading, VFX, and editing can happen remotely to a certain extent but other services such as sound recording, mixing can happen only at perfectly designed sound studios. As per guidelines by the I&B Ministry will regulations affect the content on the OTT platforms? As per you do you think there is a need for censorship?

India has multiple languages, beliefs, and cultures. It also has the potential for great storytelling because of its rich history. Censoring content for TV audiences is understandable as no one has control over who shows up to watch. However, censoring content for theatres and OTT is unnecessary. For example, if a movie has been given an “A”, anyone who is not an adult should not be allowed to enter the cinema. Similarly, for OTT platforms, all “A” titles should be available only to individuals who have an adult profile. Yes, this might not be entirely possible to enforce in the real world but in most cases, censorship does harm the creative impact of the film.

Today 4K and Dolby have come into our bedrooms, how are you seeing this development, will it affect the theatre business?

Dolby Vision and Atmos have been revolutionary technologies that have introduced a new dimension to storytelling. It has elevated the content and the consumer feels far more immersed as opposed to a regular 2K and 5.1 surround sound outputs. I do not believe that it will impact the theatre business as most titles that have historically been produced are best suited to watch in theatres. The further development of this technology will only allow the producers power to explore and step out of the box. It will help create more content and that is the best possible outcome!

What have been the expansion plans for Famous, and where do you see yourself in the next 3 years? Will Famous become a one-stop-shop for Producers be it Advertising commercials or Films?

Our mission at Famous is to unlock, inspire and nurture the imagination of storytellers by empowering them with a blend of tech, talent, and infrastructure. With this in mind, we have taken steps to upgrade technology, both for production and post-production, and enter the business of producing content which will ensure value generation for a business that initially provided only content processing services.

Our recent investments in setting up a Phantom Flex Lab, Green Screen studio, Co-working space, localization, full Dolby certified post-studio, Advertising production house, and producing our first OTT feature are just the start. In the past couple of years, we have moved from being perceived as a generic TV Commercials studio to now working with broadcasters, OTT, feature films, and other verticals such as Live Events. 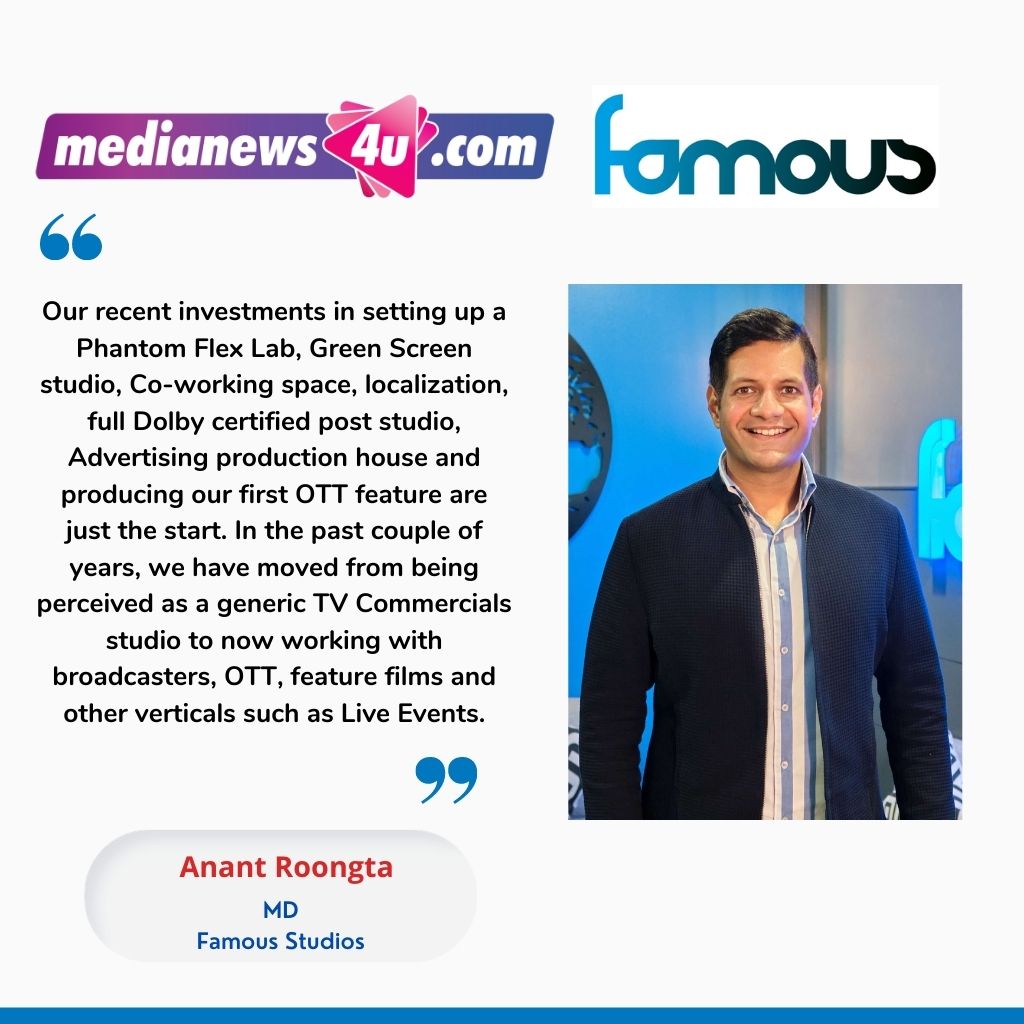 We are now looking at entering the Virtual Production space, partnering with global content creators, and investing in technology such as robotics to offer unique future-proof solutions to all content creators. Our next order of business will be the production of commissioned and IP long-format shows and films.

Mumbai: Gurgaon-based fintech startup Fyp recently launched a unique payments app along with a prepaid card for teenagers, in association...

Mumbai: The growing love for esports, gaming and game streaming in India has not gone unnoticed. Set in the world...