Game of Thrones is the Most Torrented TV-Show of 2019: Torrent Freak

International: Global content creators continue to loose big chunk of their revenue to content piracy. The most popular shows become the worst affected. During 2019 also the content piracy continued to haunt the media owners and content creators, depriving them million of dollars of revenue losses. Game of Thrones continued to be the most affected for the seventh year, as the show has taken the top spot as the most-pirated TV show on the internet through BitTorrent, according to TorrentFreak.

Since the release of the first episode back in 2011, Game of Thrones has conquered the hearts of many people. Unfortunately for HBO, not all of those fans enjoyed it through legal channels.

For several years Game of Thrones has been the most pirated TV-show. This year, when the final season aired, the interest was once again overwhelming.

As highlighted in the past, Game of Thrones is good for many millions of downloads per week. The show is so popular on pirate sites that it visibly boosted traffic this year.

This will be the last year that the HBO show tops the chart though. The series has ended which means that the most-torrented title will be up for grabs in 2020. There are a few strong contenders for this spot, including Disney’s The Mandalorian. 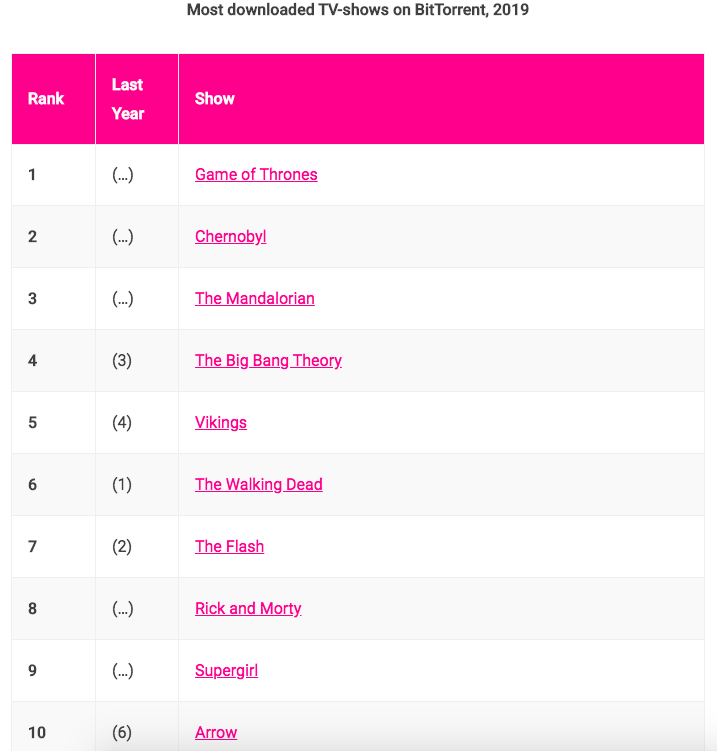 The Disney-exclusive show is listed in third place this year but whether it will maintain its momentum remains to be seen. This year’s numbers may in part be boosted by the fact that Disney+ is not available globally yet.

The Walking Dead saw a dip in official TV ratings and has been passed in the ‘pirate’ list by a few shows including The Big Bang Theory and newcomer Chernobyl. The latter did very well as a mini-series, but won’t return in the coming years.

It’s worth noting that BitTorrent traffic only makes up a small portion of the piracy landscape. A lot of people use streaming sites and services nowadays, which generally do not report viewing stats.