I believe in ROR, Return on Relation: Rajesh Kejriwal, Kyoorius

What started off as a promotional activity for the paper business of Kyoorius, has now become an annual design conference popularly known as the Kyoorius Designyatra, has concluded its 14th edition in Goa with the Kyoorius Design Awards 2019.

KDY brings speakers from across the world; such as graphic designers, visual communicators, art directors, illustrators, artists etc who share their stories, learnings based on the theme of every year. Some names that graced the occasion were, David Carson, Timothy Goodman, Orlando Mathias, Aakriti Kumar and the list goes on…

A lot of design students from across the country come and attend KDY. Apart from all the knowledge and learnings they get to interact with these speakers on a one-on-one basis which helps them get internships and jobs. Kyoorius encourages the speakers to interact and meet these young creative minds.

The Kyoorius Designyatra is a great contribution to the design community.

Medianews4u caught up with Rajesh Kejriwal, Founder & CEO, Kyoorius to talk about KDY, its journey and their new initiative Switch.

How many years have you been organizing and curating Kyoorius Designyatra? How did the idea to start KDY come to you?

Designyatra is in its 14th year and if I have to go back to the genesis of Designyatra… I am not a designer but I sell premium paper so Designyatra started as a marketing exercise for my paper division. The idea was, how could I get a paper merchant who is a vendor to the design community to do more than he would. If I have to make friends with that community and influence them to use my paper then I had to make sure that they profited from something that I did for their professional life and if they profited from that something then they would love my company. Designyatra was that exercise. How can we get 800 designers under our roof for three days, having meals together building great relationships and they are also meeting people who are their heroes and people who can inspire them. This changes the relation into a much friendlier relation and I have been a person who strongly believes in RoR rather than RoI. RoI is Return on Investment which all MBA guys talk about and RoR or Return on Relation is what I talk about. If you build a good relation, return will follow.

In fact, Designyatra was supposed to go on for a year or 2 as just a promotional activity. Then we saw the hunger and passion of the designers and how much this event benefitted them. I then decided to set aside marketing promotion and make this a not for profit event and let it roll and it’s continued since then… 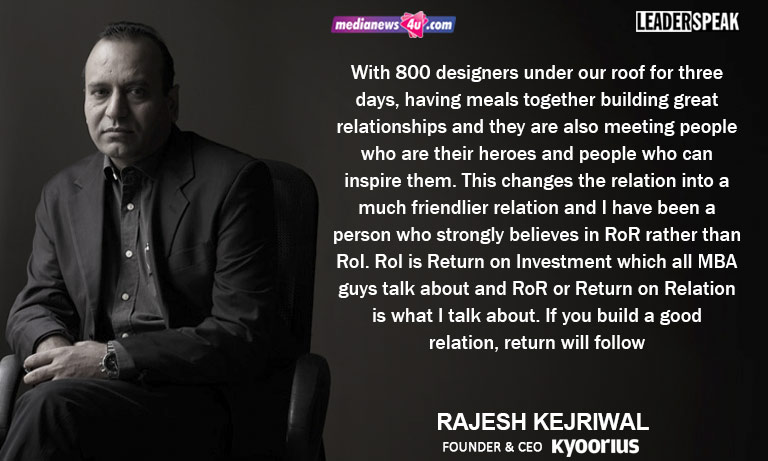 How do you create the exhaustive list of speakers who deliver some brilliant sessions at KDY?

I think it’s not so difficult. We’ve always had a theme for the conference. Once you have the theme in place, for example this year our theme is ‘On the Contrary’ after which you see which designer fits the theme? We have 24 speakers this year, we will have 10-11 speakers who fit that theme to the Touch as a David Carson, Timothy Goodman; Marzen who is going way beyond what she is doing. All of these people fit the theme “on the contrary” very well. When we contact these people, we tell them what we expect of them. Then we marry a bit of gender diversity and country diversity etc. We look for people from across the world, someone from Australia, Thailand, Denmark, and Copenhagen etc.

What according to you are some things that other conferences don’t do in India?

What most conferences don’t do in India, sadly which is why you see fatigue coming into conferences eventually, is that they do not research and curate the speakers. It’s not just about bringing speakers for the conference; what is also important is to see how different is the second speaker from the first speaker of the day. Who talks in the morning? For example, on day one of KDY we built the excitement up to Timothy Goodman’s session. Morning sessions should consist of a speaker who may be a bit more serious who have a larger message to give. As the day progresses it’s important to deal with actual physical fatigue of the audiences. How do I, as an organizer, address that fatigue?

I don’t want the speakers to come here and leave after giving their address. We want them to stay for all three days and interact with the audience. Till now about 128 jobs have been offered to designers in India from global speakers.

The founder of ITF India Type Foundry, Satya Rajpurohit was there at our first conference as a student. Peter Bi’lak, founder of Typothque was the speaker. They met here and Peter offered him an internship in the Netherlands for 6 months. They both got along well and started India Type Foundry together here for Indian fonts. There are many stories like these and I believe a conference must address all of this.

I strongly believe in these three profit areas that every conference organizer must address. One is how does a speaker profit from being here? The speaker must profit from here because then the speaker goes back he or she will actually recommend more speakers and encourage them to come to our conference, so speakers must profit.

Third, the organiser must profit. If all three don’t profit then it’s a losing game. 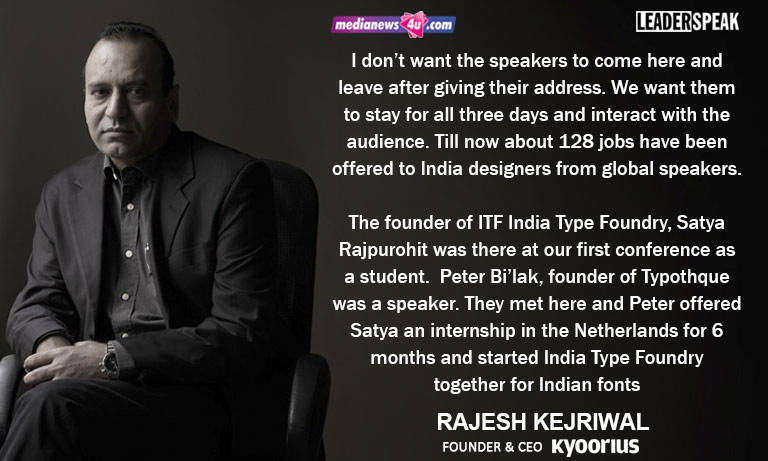 How much time do you take to create the theme, curate the sessions and get speakers onboard?

One year. We already have got 5 speakers confirmed for next year but we don’t have the dates yet. There still will be some to-and-fro form of communications where some dates might not suit some of the speakers.

One can’t think of the theme and speakers three months before an event of this scale and magnitude.

I have come for the Kyoorius Designyatra for the first time; I have been to various other industry events but not to a design conference. The sort of audience that is at KDY is very different from the other industry events that I have been to… How over the years has the student communality benefitted from KDY not just in terms of getting internships or jobs but in which other ways…?

There are a lot of other ways by which the students benefit from KDY. If you notice, the speakers give a lot of advice… and it’s not something that one gets from a textbook or a curriculum. Now if David Carson says, “Just Do What your heart tells you to do” maybe some students will take this seriously and take to heart and decide to really do something with it. They benefit from it.

One can’t ensure that a student benefits from it. One can only provide the platform for them to benefit, then it is up to them how much they take away from KDY. For example, this morning, I asked on stage that how many students interacted with the speakers after the sessions got over. Maybe about a hundred hands went up. If the others have not interacted with the speakers and not benefitted then what can we do?

What is Switch? I saw how you encouraged the young students to get on the platform and very easily gave them your own email id get in touch with you where you will be connecting students with the speakers who would want to hire them…that was such a heart-warming gesture…

There are a lot of design schools and they do teach you very well, but the practical learning that you get by working under good designers who have gone through a body of work for a long time is like a master class. And if you can do that, for over two months with somebody, it helps shape you for the rest of your life. While it’s good to get people jobs, it’s also good to shape them up to get jobs better.

There are a lot of curious young people across the world, and not just in India. Indians who want to go abroad and see how they do things and there are people abroad who want to come and do things in India. I think that’s a great way to get people to mingle culture, understand, they’re more systematic, we are more chaotic both are a nice, but if they both come together, each one rubs off on the other and we said let’s make this happen through internships.

We’re also speaking to few international governments and at the moment, I’m having an active discussion with the Netherlands government to work around a visa process that allows students to work on a project basis for about 3 months. At present one can go on a tourist visa for an internship, there’s no problem; we think we should make that happen but if designers can go and work on a project basis on a temporary work permit or work visa then it helps the entire design community. It will help build up better carriers for everybody.

What’s with the launch of switch ? How did you come about the name switch?

Will switch be limited to designers?

Interesting question at the moment. I think it’s limited to designers. But at the moment, maybe it’s also limited to Visual Communication designers, going forward we will open it up for all disciplines of design first, because that’s like a body for designers. It may also end up opening it up for advertising. Or let me put it this way switch will become the platform globally for creative professionals. It could also help a musician at some point in time… maybe yes.

Look this is the beta version and as we go along will it progress. In three years’ time I hope switch becomes a global platform for young creative professionals. 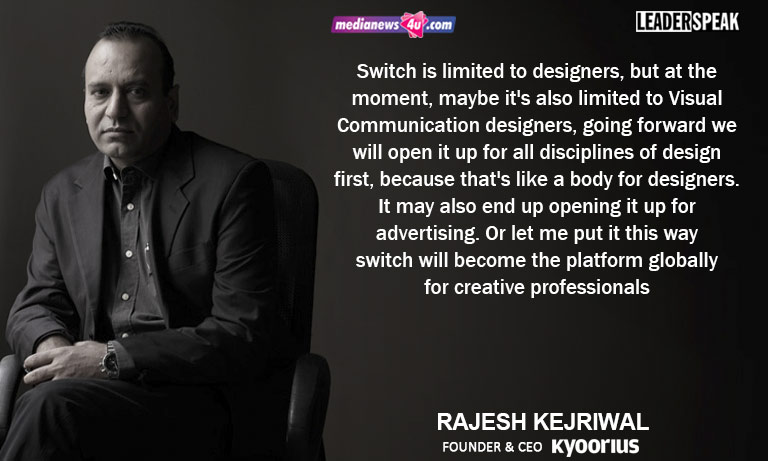 Will Switch be a simple job posting application from an employer and then a prospective employee applying to those jobs or it becomes some sort of social networking site also?

In the first year, it will only be a basic job positing portal and after which it will also become a social networking portal too. We will go through various iterations, etc.

How is Kyoorious promoting it apart from giving it a push at the Designyatra?

Yes, we do a lot more stuff. We will be doing a lot of promotions around that globally, not just in India. Okay. But all of that I think will happen after three, four months. Once we are confident that this product is working well, there are no glitches. We thought we’ll do the beta version with the Designyatracrowd and there’ll be many bugs will have to fix and once it’s all fixed, we are going to promote it quite a bit globally.

Chennai: CavinKare’s CK Ranganathan is set to make his father’s vision of ‘Whatever the rich man can enjoy, the common...

This is not the time to be grim or to slacken: Ashish Bhasin

Consumption of OTT, Non Prime Time TV and Doordarshan on the rise in first week of Lockdown: Study