India really did need a competitor in the Esports market and it’s really refreshing to see an Indian developer take up the challenge: Suromitro Basu, Sportskeeda

While the ban of another 119 applications backed by Chinese companies came as a solid blow to a lot of people across the spectrum. Ardent PUBG fans, gamers, and the entire esports ecosystem were in complete shock. Some had anticipated the ban soon after the Tik-Tok ban but hoped otherwise.  A major player of the Esports ecosystem is a leading sports news portal, Sportskeeda that has built a community of esports lovers not only in Inda but across the world.

Being a leader in the esports coverage, Suromitro Basu, Esports Head – Sportskeeda spoke to us about the impact of the ban of PUBG on the entire esports ecosystem and the way further.

With PUBG mobile banned in India, how do you think this will affect Sportskeeda and the esports content ecosystem as a whole?

Well, I would be lying if I say that PUBG Mobile getting banned won’t affect the esports ecosystem, it was the sole reason why Indian esports got to a certain level of exposure and popularity. Esports athletes had consistent salaries, event organizers, and teams were making money, helping create a holistic ecosystem for budding talents to thrive. You can picture it as the equivalent of cricket from the traditional sports scenario.

When it comes to Sportskeeda, about 40 % of our Indian esports traffic came from PUBG Mobile, hence it will have an effect. However, during the first ban wave (TikTok list), we had pre-emptively scaled operations for Free Fire and COD Mobile. which have been direct beneficiaries of the ban. Free Fire saw a 2.1 million download surge post the ban, while COD Mobile saw 1.5 million, till four days after the ban. With content creators slowly shifting to these games, we are uniquely placed in reporting for these mobile gaming giants as well.

Interestingly you ask that question, and you’re right, While India constituted 45 % of our PUBG Mobile consumption, countries such as Indonesia, Turkey, Thailand among others also have a profound fascination for this game. Hence, we regularly cover the esports scenario in these regions as well, hence our PUBG Mobile coverage doesn’t stop just because it’s banned in India.

We will continue to cover game updates and updates on the esports scenario, as PUBG Mobile is a global esports title and our position in the market is the same. And the good part is with the news coming that PUBG Corporation is taking over publishing from Tencent in India, PUBG Mobile might just get unbanned in the country as well. 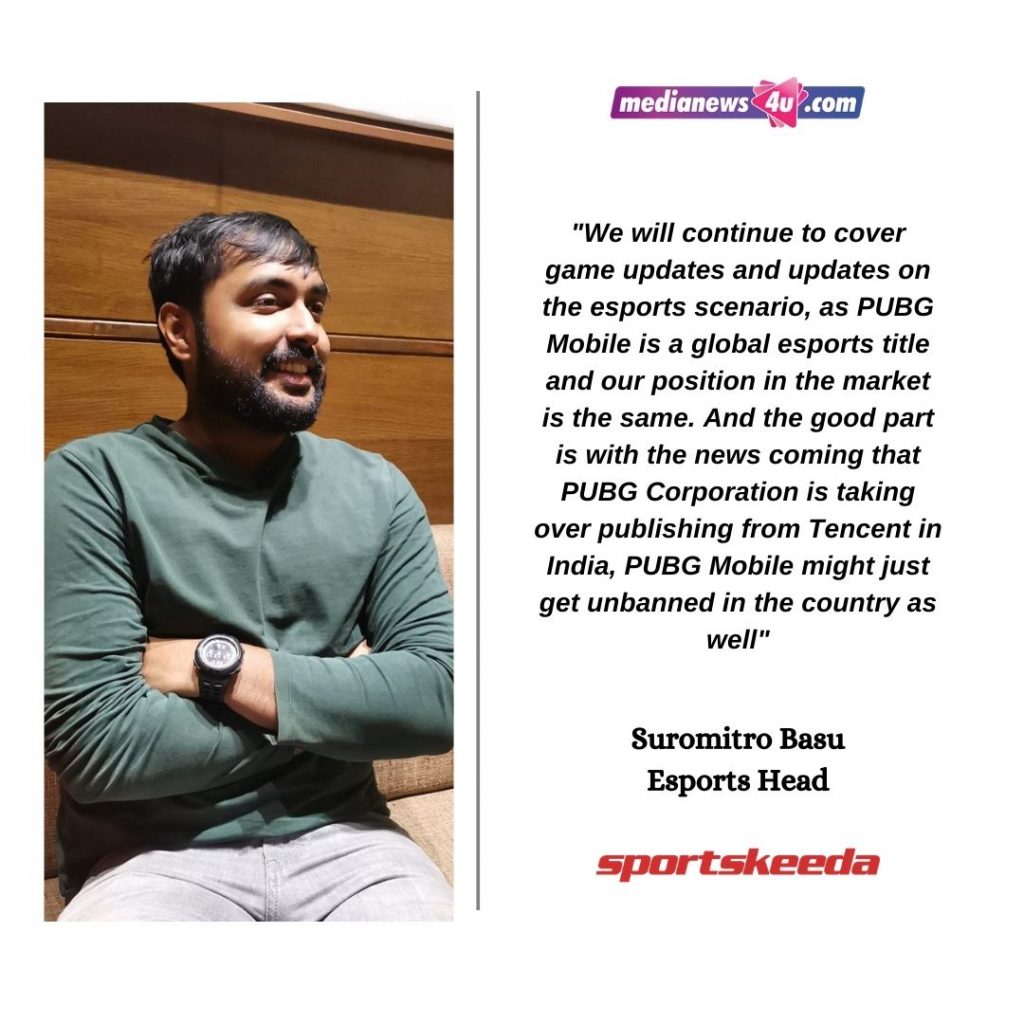 What are your thoughts on FAU-G? Will it be able to replace PUBG Mobile as the country’s alternative?

I think games like Free Fire and COD Mobile, who have been in the Indian market for over a year now are yet to come close to PUBG Mobile and PUBG Mobile Lite in terms of popularity, So I think it will be very difficult for FAU-G to be able to reach that level. However, India really did need a competitor in this market and it’s really refreshing to see an Indian developer take up the challenge to compete in this hyper-competitive games market. Hence, I think India as a country wants FAU-G to succeed and bring an Indian element into the genre so that the country’s gamers can relate to it. However, will FAU-G be able to match up to PUBG’s popularity, no, but will FAU-G create a unique space for itself in the market, highly likely! During COVID-19, the Indian esports industry was at an all-time high, be it a number of tournaments or viewership, do you think the ban will affect this?

Oh yes, most definitely, I personally look at this as a transition period for everyone involved – players, event organizers, teams, content creators, and websites. With players slowly switching to other battle royale games, it is now the onus on the game publisher to make sure that they create an esports ecosystem for the game as well. Free Fire has the FFIC going on right now, which is the biggest tournament that they have ever had, COD Mobile announced their national qualifiers, so they are taking the first steps to create that kind of an ecosystem.

The only challenge I see is for the PUBG Mobile influencers and professionals to begin their grind again, to reach the top in these titles. Since the platform is similar here (Mobile), it won’t take too much time.

In terms of Sportskeeda, we do approx. 12 million monthly users in Esports every month, out of which about 3.5 million would be for PUBG Mobile India, hence that number will see a drop, but we are confident that we will scale other games as well. 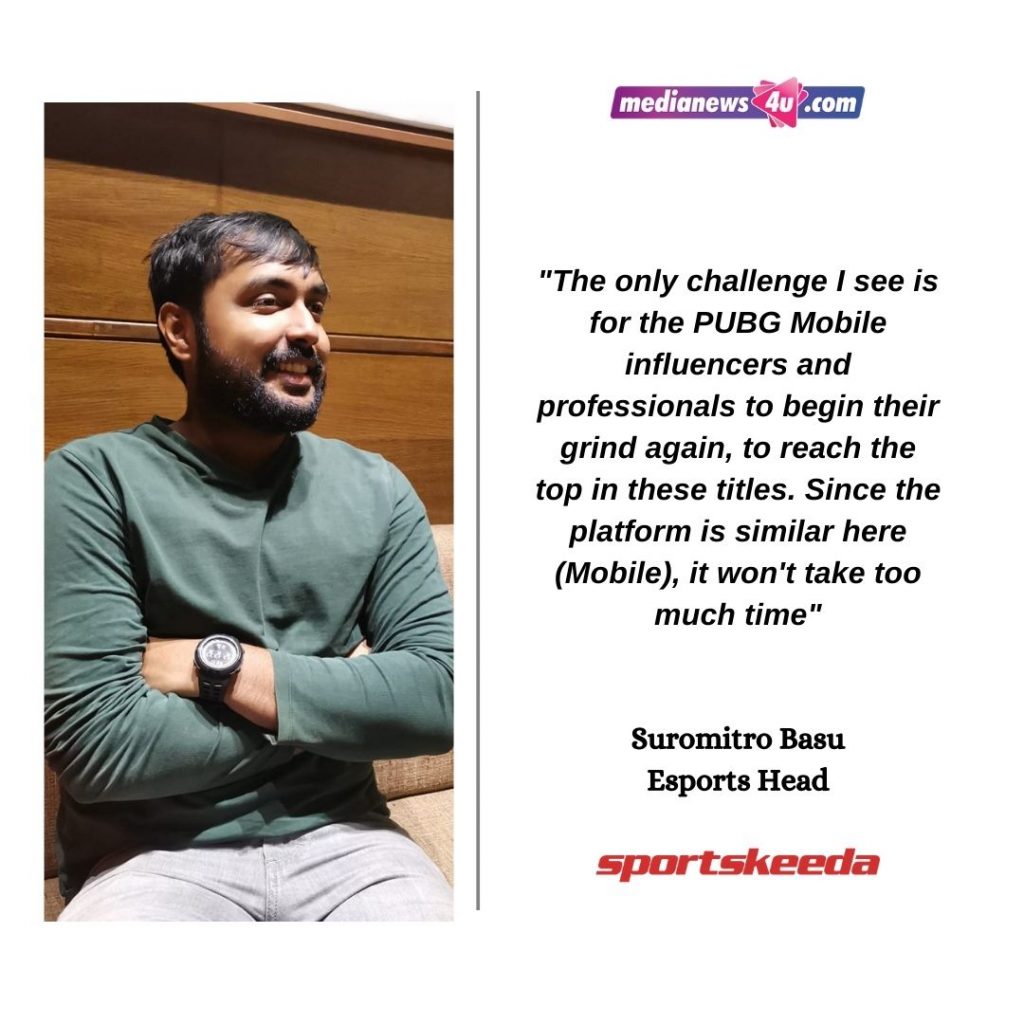 Sportskeeda recently has seen growth in the US esports scene as well, can you tell us more about that?

Yes, while covering the Indian esports community, we also created an American team that focuses both on the American esports titles (Fortnite, COD etc) and the culture around gaming there. Watching gamers/streamers/personalities is a massive part of American pop culture now, platforms such as Twitch rival that of Netflix in terms of content consumption. Hence we are attempting to uniquely place ourselves where we are not only creating content about the games but also personalities who are helping shape the community and culture in the region.