IPLomania by Hansa Research explores Who can be the perfect successor for Dhoni as a Celebrity, as a Player and as a Captain

New Delhi: Indisputably the greatest, ‘Finisher’ in the modern game, Dhoni has already finished his international career. The search for his successor, both as a player and as a captain, have been talked about since even before there was any inkling on when he might hang up his boots.

As a captain, the search did not go beyond a very popular choice in Virat. But as a player, there are numerous contenders like KL Rahul, Rishabh Pant, Sanju Samson. The verdict is still out on who could fill the huge boots that Dhoni just hung up. And we might never find out. After all, we never managed to find a new Tendulkar; we unearthed a new Virat instead. But let’s go back to the seemingly unanimous choice of the Captain. Let’s not undertake a role of the selector for ourselves, and stay true to our character as a fan of the game. The selectors might have had their deliberations while picking Virat. But we, as fans, are also invested enough to have our discernment.

IPLomania— a syndicated study by Hansa Research provides a unique perspective from the fan’s point of view.

Image associations across various parameters reveal a very interesting facet of each player. 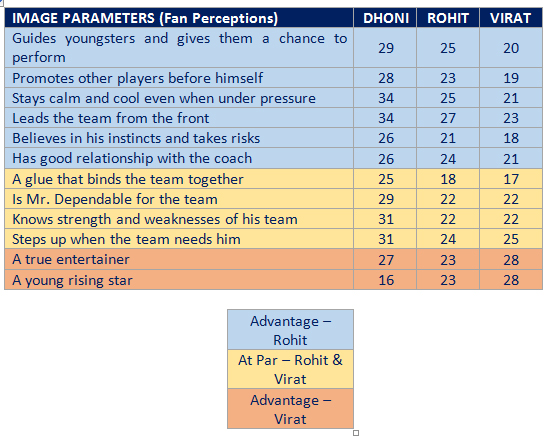 Apart from the obvious ‘Young Rising Star ,”Dhoni’s association across all the image parameter are by far higher than both Virat and Rohit. But the delta between the scores of Rohit and Virat can be compared to Dhoni– as a Player, as a Captain, and as a Celebrity. The cult celebrity status of Dhoni has an able successor in Virat, is superlative performances across  all formats makes him the greater entertainer, his consistency has helped him transform from just a great player to a Star, much in line with what Dhoni achieved.

As players, both Rohit and Virat are at par. They have distinct roles within the team, but both are considered as dependable and seen to be rising when the team needs them. However, the big reveal emanates from the attributes where the fans have rated Rohit more than Virat.

Guiding and promoting youngsters, staying calm under pressure, leading from the front, belief in instincts, taking risks, good relationships — all the attributes of a good leader. While treating the IPL as a benchmark of leadership skills at International level is wee bits over-kill 4 trophies as against none, also cannot be denied. And we do have comparisons at the international arena as well! Rohit has captained India (in T20s &ODIs) at times when Virat has been rested. Rohit has not captained any Tests yet, but is captaincy record in the limited overs format (albeit limited) certainly merits consideration.

If we allow the IPL to be treated as a surrogate for limited overs cricket, Virat as the captain has been shuffling the team structure frequently, sans trophy; Whereas Rohit as the leader has been bringing together the seemingly right combinations and making them click. The numbers are self-explanatory, but is India ready to split the captaincy?

Carat India, the flagship media agency from the house of dentsu international, has appointed Ashish Singh as Vice President -...