Equinox is headed by, Ram Madhvani who has over 20 years of experience in the profession of ad filmmaking and movie direction is known to have a thirst for quality projects that challenge him as a filmmaker. In the fickle world of advertising, directors at Equinox are hungry, extremely talented and digitally conscious making Equinox the youngest oldest Production House in India.

For over two decades, Equinox has hand-crafted some of India’s most path-breaking and memorable commercials, ranging from the evergreen “Hamara Bajaj anthem” to the celebrated “Happydent White” commercial film and the “Airtel blockbuster campaigns’.

Ram Madhvani is known to be one of the prodigious talents in the world of advertising has worn many hats and excelled in various fields. Having worked with prominent advertising agencies in India, his skill has been widely recognised and honoured with the prestigious Teachers Achievement Award (2004-2005).

Over the years Equinox has worked with multiple clients and every major advertising agency in the country and with every campaign they have added a feather to their cap of excellence in filmmaking. Their constant experimentation and out of the box approach for their edgy work has earned them space in the industry.

Equinox has remained relevant and have worked their way up to awards. Besides being feted at London, Adfest, Abby’s, Clio and Cannes, Equinox is the only producer in the country to win “IAAFA Best Production House” three years in a row.

He was chosen as the President of the Jury for Film Craft at Adfest Bangkok in 2011. Amongst other achievements, he received a special mention in top 10 directors list in the Asia Pacific region in 2007 and was ranked at the 11th position for the most awarded directors by the Gunn report.

He made an impressive directorial debut with the film Let’s Talk which was premiered at the esteemed Locarno Film Festival. The film also received awards for Best Actor and Best Debut Director at the Srinivas Gollapudi National Awards and in 2016 he directed Neerja. Ram won “Best Director” and “Best Film” and the National Award for “Best Feature Film (Hindi)”.

MediaNews4U spoke to Ram Madhvani, founder and director, Equinox Films on how as a Production House they are looking at this lockdown

The country is under lockdown, but the brands have not stopped communicating, remote shoots are happening. What are your thoughts on the same?

Yes, we too at Equinox have been working hard during these trying times. I have just finished a new ad during this lockdown. Apart from brands needing communication this also helps at multiple levels.  It helps with keeping the work going. It keeps the economy running. It keeps us occupied during one of the toughest periods in the history of humankind. 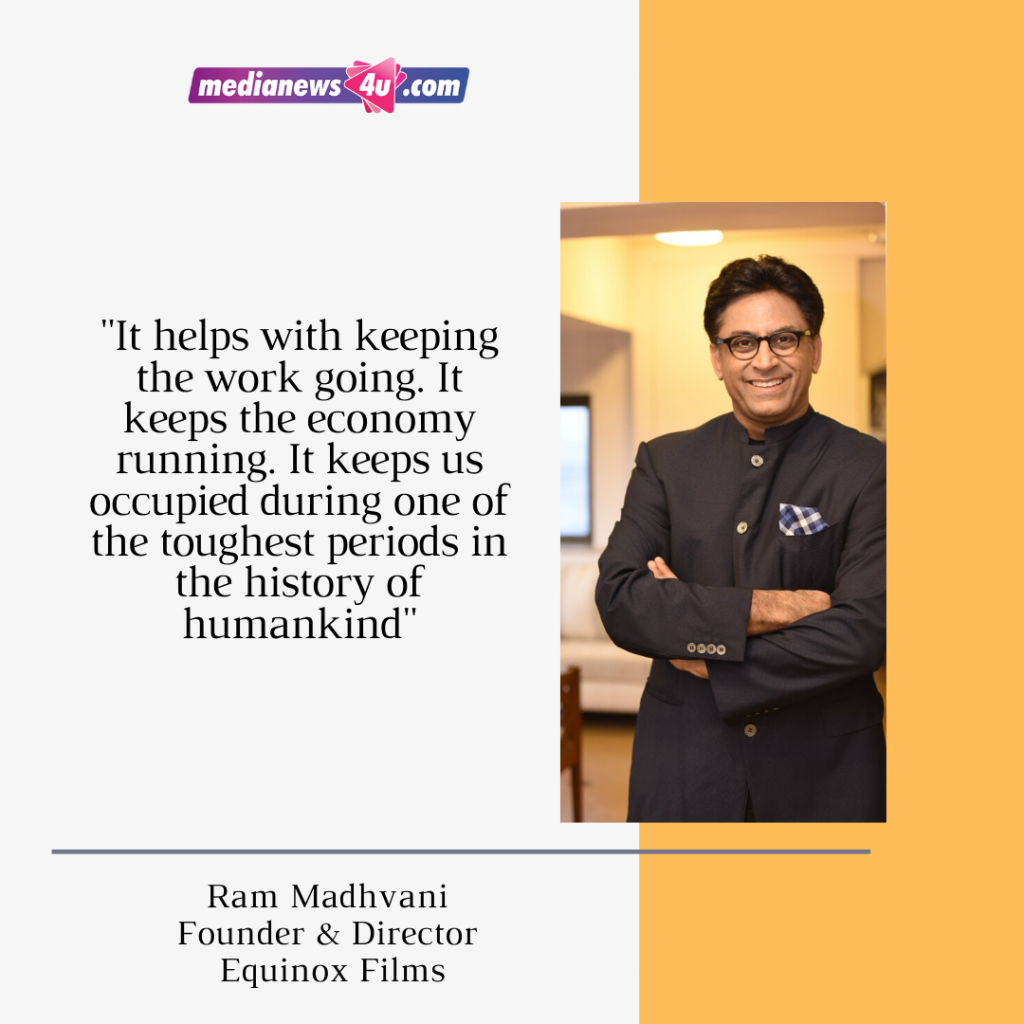 It has been a long time since you ventured into making ad films. How has the scenario changed from then to now?

Who says I have been making ads for a long time? I’ve just started 🙂 my keenness and hunger for work are still the same as when I had started off. I have realised, if you are passionate about something then it is easy to be nimble and to adapt. It is not about what is being invented, it is about re-inventing and re-visiting. I thoroughly enjoy collaborating with Clients and Agencies, talking about brands, ideating, making ad films, the entire creative journey is extremely exciting. In my opinion, if you’re passionate it is easy to re-invent. 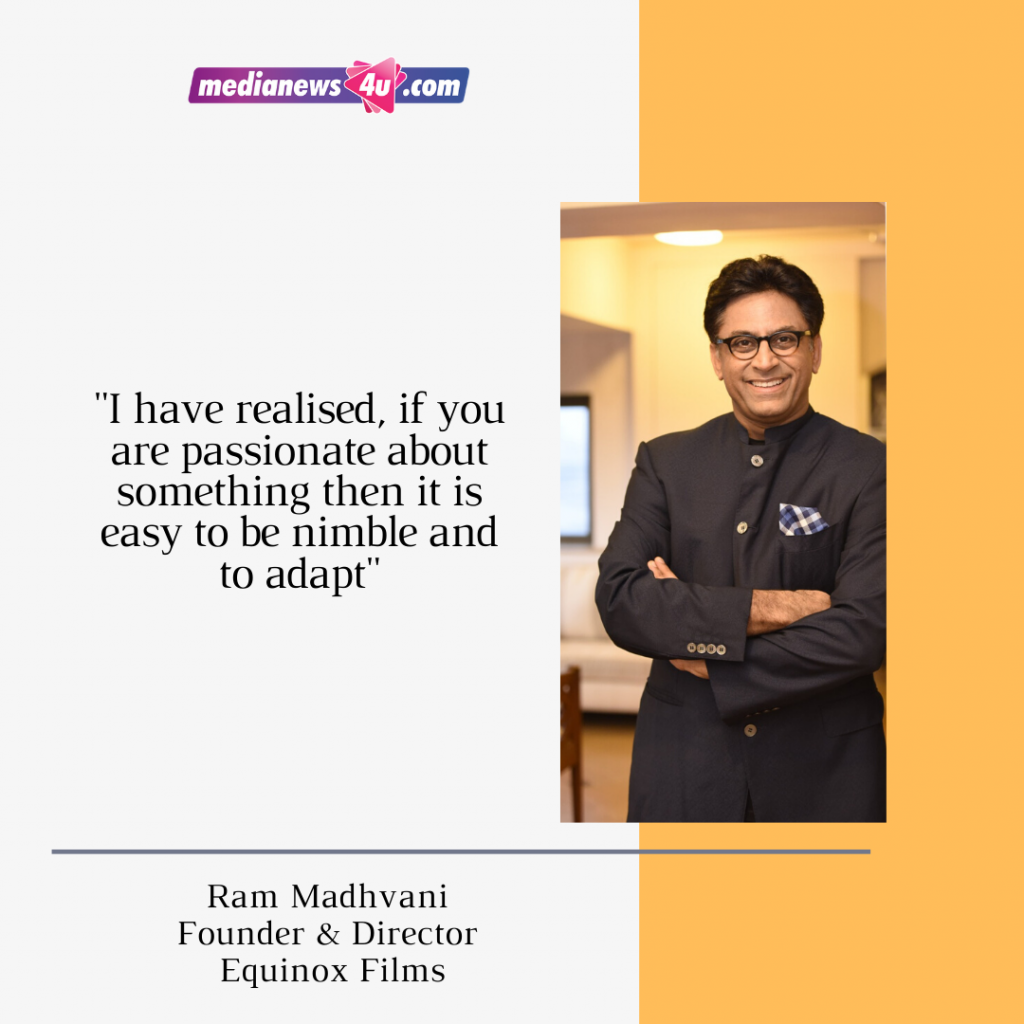 Most brands are experimenting with 10 seconders and digital films that do not require high technology. How has the whole film making process changed?

Durations have got to do with stories. Some stories can be told in 10 seconds or even 5 or even in 1 second. In advertising, a lot has also got to do with frequency. The 10-second message is not told just once (unlike in a movie etc). We are meant to see the 10 seconder many times so the cumulative communication also has an impact. The great thing is scripts can be written and shot and edited while working from home is completely safe for everybody. The word technology comes from the Greek word techne and logos. Techne means art or craft. Logos means expression.

So as long as the art craft and expression is valid the ever-evolving technology is valid too.

Post lockdown, will we see smaller units. How do you think the brands are going to change their communication strategies?

Communication strategies keep changing in the ever-evolving world. That’s natural. It’s what brands do. More and more what matters is not what you “say you do“or “say you will do” but what matters is what you “do”. Today brands are about doing, and not just saying.

Unit size is not important. That will keep changing with time. What’s important is the communication itself. Unit size does not affect communication. I keep saying, “Communication is not message sent, it’s message received”. 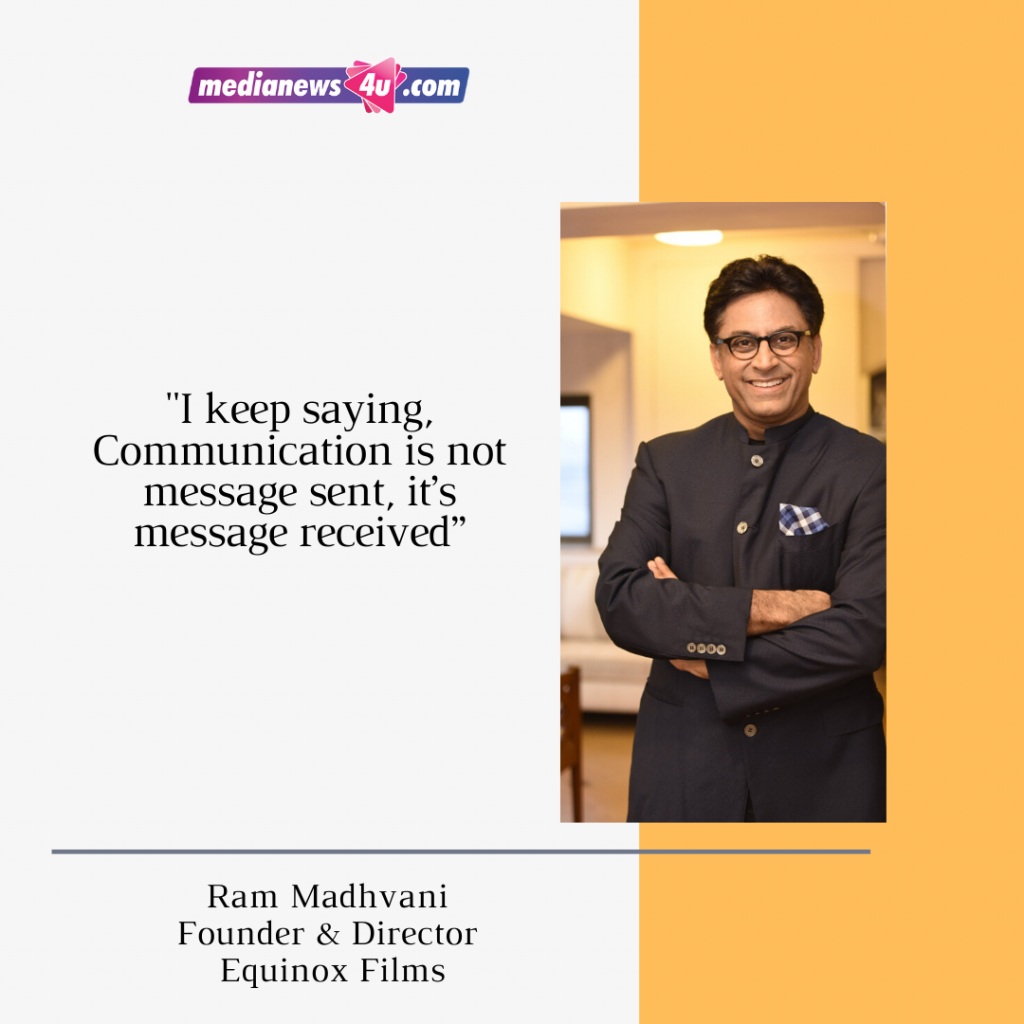 Hyderabad: Star Maa is set to air its new fiction show 'Rani Rudrama Devi' from the 18th of January every...