by Editorial
in Featured, OTT
Reading Time: 2 mins read
A A

Mumbai: Radio City & Mid-Day concluded the third edition of the most popular and credible Hitlist OTT Awards with a virtual awards ceremony on 23rd April 2022. The grand finale night digitally celebrated some of the most popular and prominent artists and performances from the OTT industry. The first ever OTT awards by a media conglomerate saw great triumph with an overwhelming response of over 2.97Mn+ votes from the audience, marking the3rd season of the Hitlist OTT awards the most magnificent one.

The rise of the OTT platform is evident by the surge in content consumption pattern and the consistent number of series and movie launches across OTT platforms. To celebrate OTT platform’s growing popularity and to applaud its content creators and performers in this space, Radio City and Mid-Day launched the third season of their Hitlist OTT Awards. Following the astounding success of season 1&season 2, the 3rd season was expected to be even bigger and grander. The public voting commenced on 18th February to vote for their favourite artists, web series and movies across 16 categories.

Commenting on the success of season 3, Kartik Kalla, Chief Creative Officer, Radio City,said, “The thumping response of the public with 2.97Mn+votes is a testament to the popularity and influence of Hitlist OTT Awards. We are the first ever media conglomerate to introduce awards to recognize talent from the Indian OTT space. Given how the 3rd season has flourished; we are confident of continuing to build a strong legacy of our marquee properties. I would like to congratulate and thank the winners as well as the nominees for their hard work, spectacular performances and for entertaining us with top notch content.”

Mayank Shekhar, Entertainment Editor, Mid-day said, “We are extremely delighted to share that Season 3 of Hitlist OTT Awards was a huge success and would like to thank our public for such a fabulous response. Their enthusiasm is what motivates us to build an entertaining event. Hearty congratulations to the entire Mid-day and the Radio City team for building a legacy that will endure and become grander each year. It was a fruitful and fantastic experience to be a part of the jury and choose the best talents across OTT platforms. Best wishes to all the winners and nominees for their amazing performances that made Hitlist OTT Awards Season 3 a mighty one.” 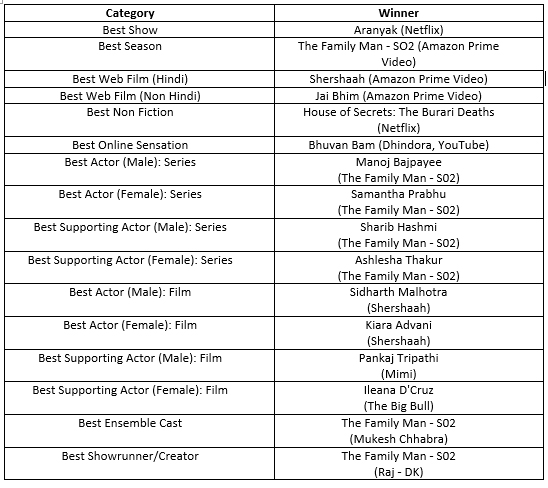