Republic Media Network has recorded a historic week in terms of viewership ratings.

“Republic TV has continued its unbeaten run across all-time bands in the English news genre with 40.66 percent market share. Republic Bangla with 28.8 percent market share has unseated ABP Ananda, the two-decade-old news leader in the genre, as the Number 1 Bengali news channel and Republic Bharat has maintained its top position above Aaj Tak. Republic Media Network has reached approximately 154 million last week alone and 266 million across India in a 3-week period. As India’s largest news network, Republic Media Network’s viewership numbers across regions, time bands, and languages in a heavy news cycle has conclusively established it as India’s Number 1 choice. The widening of the gap over the number 2 channels, respectively in the English, Hindi, and Bengali news genre, is telling of the ever-growing popularity of India’s most-watched network,” the company said in an official statement.

“Republic TV’s thundering all-day all-India ratings continue to be almost 2X of the number 2 channel Times Now. In fact, this week Republic TV is 158% greater than Times Now and 235% greater than India Today in terms of viewership across India and across Times bands. This establishes the dominance that India’s number 1 English news channel holds and the consistency with which it has become India’s uncontested news destination across the board. Republic TV has established an expansive presence across the war zone in Ukraine and Russia and has activated its wide global reporter base to ensure that it has leaped miles ahead of the competition on the big global story. Republic TV has once again retained its supremacy in Super Prime Time with a whopping 44.36% viewership this week. With the most influential names in geo-strategic affairs on the shows and the most informed global debates, Republic TV’s Super Prime Time Debate slot continues to be miles ahead of the competition in the English news genre,” the statement read. 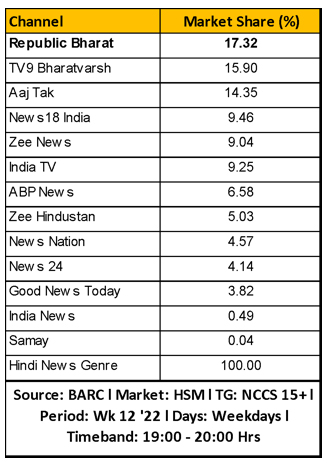 Bangalore: Ginger by Lifestyle has launched its #ImperfectlyPerfectRules campaign which reinforces the ‘Ginger Life’, a life that does not conform...

Oracle Movies, India's first NFT Movie MarketPlace, is steadily making progress by creating the right waves in the industry and...