Future Generali purpose as an Insurance company is to be a lifetime partner for the customers and lead with empathy, human touch, and innovation; decided that a concerted effort would get Indians to take their mental health seriously.

Leading with a human touch, Future Generali has made it a mission to be at the forefront of the much-needed mental health conversation in India. From roping in fitness influencers and celebrities to rolling out impactful multi-video campaigns like #HealthInsideOut, FGII has propelled a movement urging all Indians to take their mental health seriously. Its latest YouTube series – ‘Mind Matters’ portrays India’s top athletes in a completely new light, speaking about their mental health battles and simultaneously creating mental health awareness.

Future Generali has been stressing mental and emotional health in all its campaigns. Why did you think that this is the most important issue today?

While the country is currently concentrating all efforts on dealing with the second wave of the Covid-19 global pandemic, and rightly so, we believe that there is a silent epidemic lurking just around the corner – that of grief and mental health issues which also needs attention. The number of people with mental health issues in India has been steadily rising—the WHO estimates that one in every five Indians currently suffers from some mental health issue. The fact is that the fallout of the pandemic— health-related anxiety, social disconnections, job insecurities, increased workload, stress, and grief due to losing loved ones—have all resulted in the escalation of the mental health problem in India.

Mental illness is still considered taboo in India, which worsens this problem and dissuades people from actively seeking help. As a brand whose purpose is to be a lifetime partner for the customers and lead with empathy, human touch, and innovation, we felt that now is the right time to create a movement for Indians to take their mental health seriously. We did this by launching health insurance policies that cover mental illness and multiple initiatives under the #HealthInsideOut campaign for our customers and employees. Our objective is to normalize the mental health conversation and stress that emotional well-being is as important as physical well-being and to educate people that help for mental health issues is available, whether medical or financial. 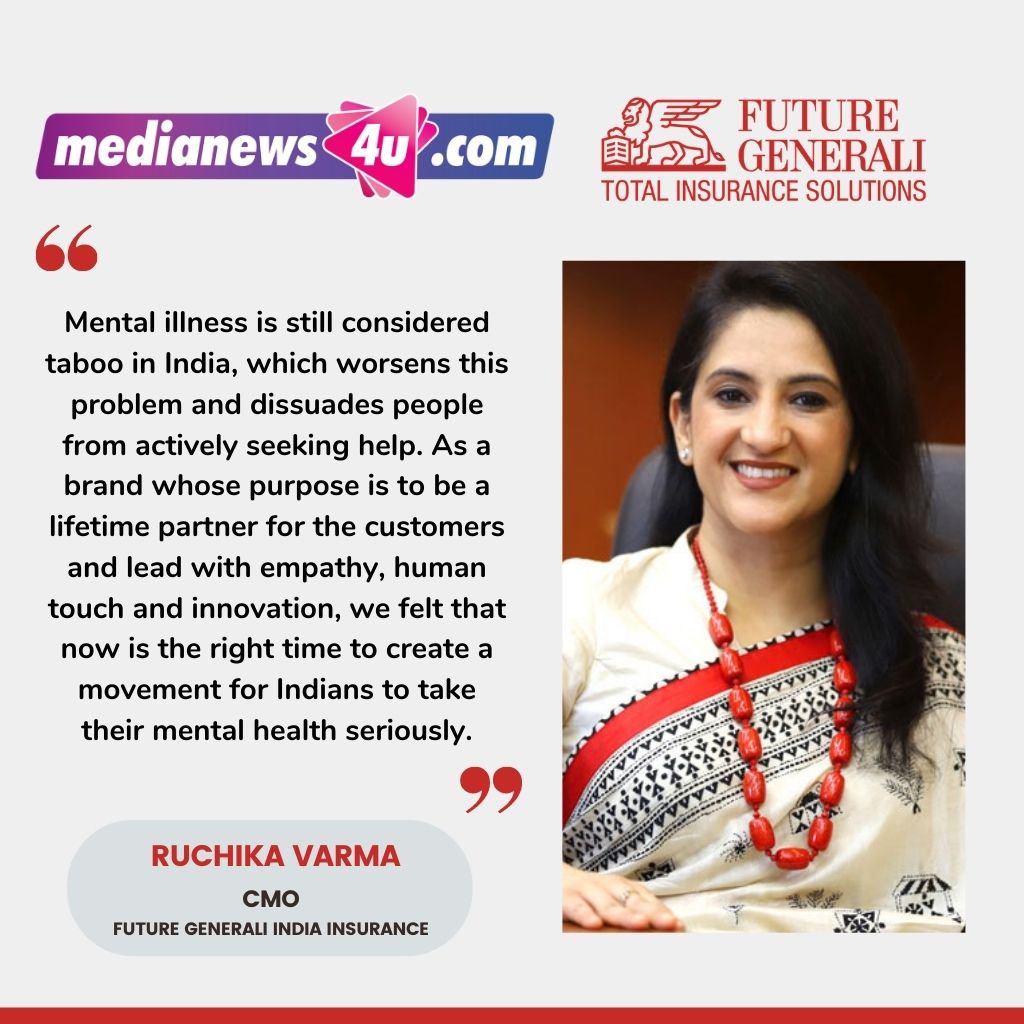 What has been the media strategy for this campaign? The pandemic has seen a huge surge in digital consumption across all demography and geography, how effective it now becomes to use digital as your main platform to reach out to your audience?

‘Mind Matters’ is a five-part weekly series featuring India’s top sports stars. Depression, anxiety, negativity, social media scrutiny, performance anxiety and pressure—Mind Matters touches upon all of these topics through the lens of India’s biggest sports personalities like Sunil Chhetri, Robin Uthappa, Sania Mirza, CheteshwarPujara and Abhinav Bindra. The videos have resonated with the audience not just due to the appeal of these sporting legends but also because what they are discussing is relatable—all of us deal with these mental health issues in varying degrees. Since the beginning of the pandemic, due to social distancing and lockdown, there has been a surge in digital mediums. Visits to social media sites increased by 19% last year over an already high base. Therefore YouTube, Instagram, Facebook, and Twitter are key mediums for reaching a broad audience cutting across geographical boundaries and various demographics.

We are seeing shifts in consumption patterns on other media. News is now consumed digitally, evident in the spike in visits to news sites by more than 40% and increasing popularity of apps such as In-Shorts, making digital news platforms a critical part of our media mix. We’ve also picked up a surge in search for health insurance by 23%, making Google even more central to our media planning.

Given the nature of the campaign, we have also reached out to sports enthusiasts through high-traffic sports sites.

Due to the nature of their content and the allure of the sports stars interviewed, the videos have resonated with a large audience, garnering a combined view of over 9.5 million on YouTube and a total reach of 30 million people in all. The videos were picked up and commented upon by influencers such as Danish Sait and Rahul Subramaniam and celebrities such as VVS Laxman, Virender Sehwag, Harsha Bhogle, and Farah Khan. 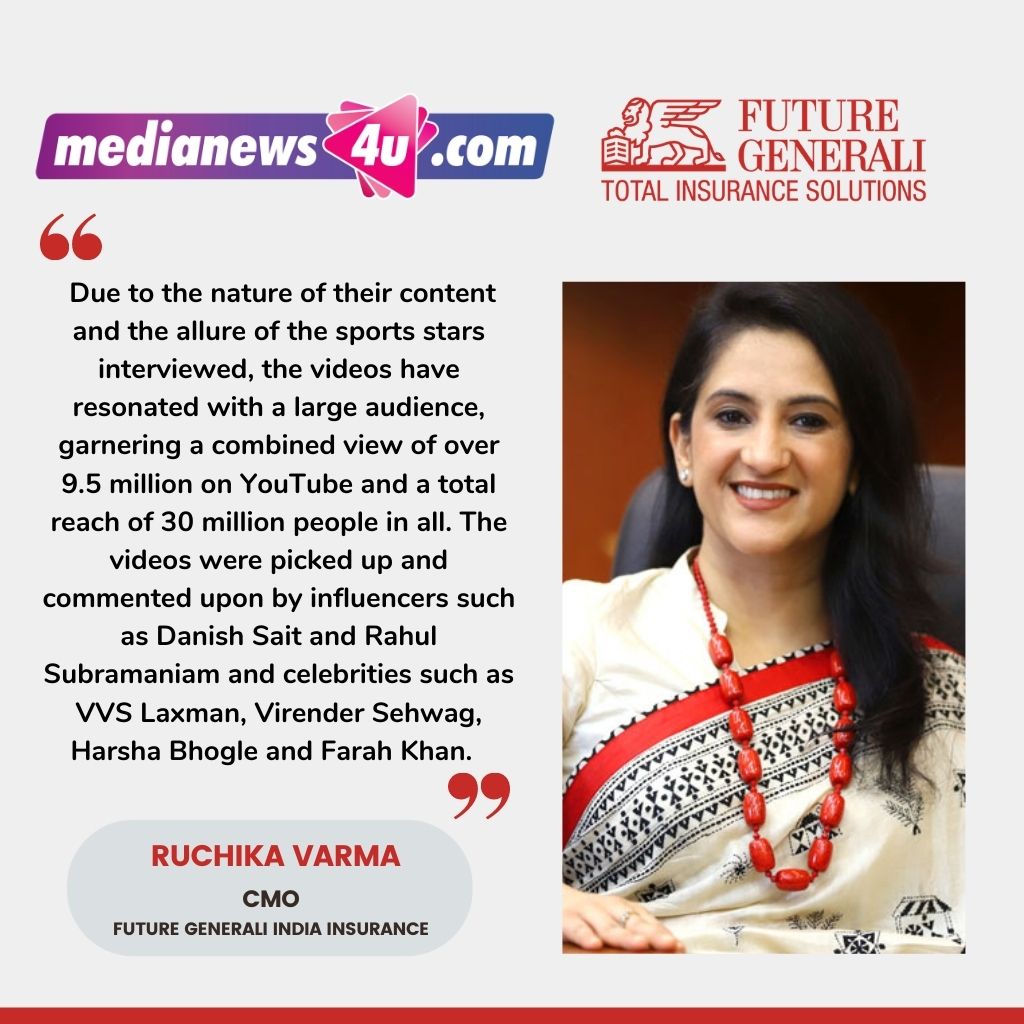 How has been the response from your existing customers on this campaign, have you seen steady growth in new customers?

Since the pandemic, there has been a distinct change in consumer behavior and a surging interest in health insurance. Customers today seek customization, innovation, and easy accessibility, all of which ties in perfectly with FGII’s goal of being a lifetime partner to customers and leading with empathy, human touch, and innovation. This is why we have focused on innovative initiatives like #HealthInsideOut and ‘Mind Matters’, and differentiated products such as Health Total Policy covering OPD treatment as hospitalization for mental illness. Not surprisingly, we see high double-digit growth in health insurance customers. Our market share in retail health has gone up from 3.1% to 4.6%, and we are currently the fastest-growing top 10 private general insurers in the Retail Health segment in FY2021.

In this campaign, you have used sports personalities, what was the strategy behind this?

Sports stars are often seen as the epitome of physical fitness. Their performance on the field as well and their fitness levels are constantly under scrutiny. However, there is minimal discussion on their mental fitness. This is what ‘Mind Matters’ addresses through interviews with India’s top athletes, where they candidly talk about their mental health struggles and triumphs. The five-part video series features sporting legends such as footballer Sunil Chhetri, cricketers Robin Uthappa and CheteshwarPujara, tennis star Sania Mirza and Olympic gold medallist& shooter Abhinav Bindra talking about everything from the pressure to perform on-field, abuse on social media and how they dealt with it, clinical depression and even suicidal thoughts, to the urgent need to create a psychologically safe environment for all athletes. We feel that sports stars who are vocal about their mental health struggles are great role models to help bring home the point that mental health needs to be taken as seriously as physical health and that it is okay to seek help when you need it.

How was the whole campaign ideated, conceptualized, and executed in this new normal?

The goal of launching ‘Mind Matters’ was to inspire, engage and educate the audience about mental health and normalize the conversation around this challenging topic, which is still a taboo in India. Conceptualized by FGII as a 15-minute five-part video series featuring India’s sports icons, Mind Matters was executed by our AOR.

The videos feature anchor Samir Kochhar, best known for being the host of the pre-match Indian Premier League show, Extraaa Innings T20, interviewing some of India’s biggest sports stars. Due to the ongoing pandemic and lockdown, these interviews were conducted online. However, despite touching upon the seemingly heavy topic of mental health, they are candid, interactive, and even feature a ‘mental health rapid fire’ round, which helps break the heaviness of the topic. 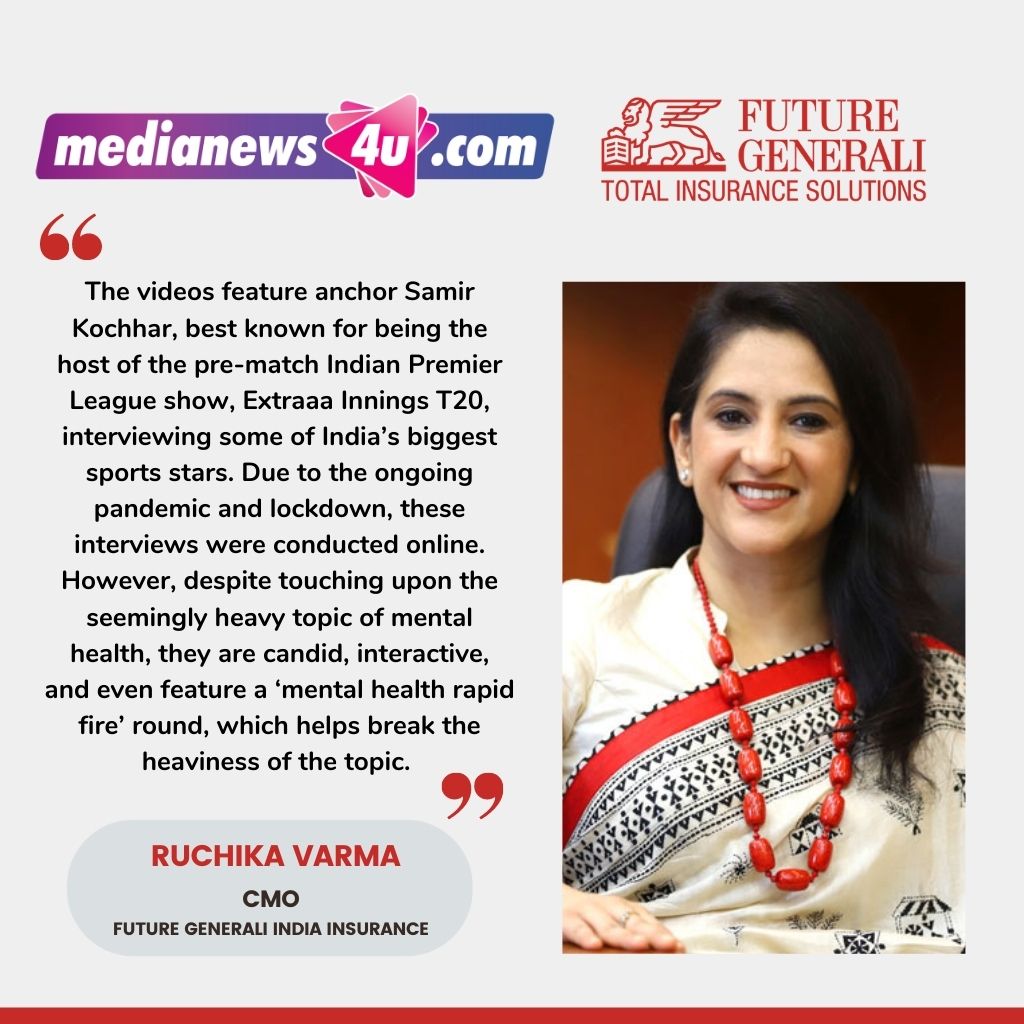 This festive season consumers will use discernment and not splurge

Though the Ganesha festivities were much more muted than before the pandemic, this year at least saw a positive light...

New Delhi: Kantar, the world’s leading data-driven analytics and brand consulting company, is continuing to invest in technology to elevate...

India TV has come up with one of its kind and very bold sales initiatives for its election programming ‘AbkiBaarKiskiSarkar’...

Our digital strategy is focused on capturing the heart and mind of millennials at the early stage: Vignesh M, Equitas SFB