StudioNEXT’s main aim is to collaborate with creators: Indranil Chakraborty

StudioNEXT was launched in 2018, to create original content and IPs for TV and Digital media. StudioNEXT is an independent business unit of SPN, it functions as a content creator for SPN media business as well as for other Channels, Networks, and OTT players within India and globally.

StudioNext first produced KBC and then moved on to produce the acclaimed series SCAM for SonyLiv. They have also produced a fiction series for Sony TV and now a finite series Dhadkhan –  Zindaggi Kii

We spoke to Indranil Chakraborty- Head, StudioNEXT on the launch of their web series Whistle Blower for SonyLiv…

The decision to launch StudioNEXT?

Wasn’t that the right decision and exciting decision to take? Yes, the excitement of again starting off something new with a big media house and it was a very easy decision. Danish and NP had an idea; I didn’t have a business plan. I joined in October 2018 with an idea. It has been an exciting journey so far.

You said that Danish and NP had an idea. But what made a Media network to start an in-house production setup?

The terminology in-house production is wrong. Sony’s original business is creating content. We are a network company, in few countries, which India is one of the foremost. This is actually the DNA of Sony; this is what Sony does in the US and in other countries. Sony creates content either for somebody or it is licensed out. Earlier, Sony Pictures Entertainment headed by Uday Singh it remained more of a distribution and a marketing company, the first attempt by Uday was to get into in some form of production and it was in the feature film genre. You needed a specialist to set up what we believe is a production House, this was not for any cost-cutting measures, but to get into development and creating something special and we believe that today the demand is outweighing the supply. So it’s very happy times we are trying to catch up and we believe that there is a need for a person who knows the production process, the setup process, knows how to deal with the talent process, etc. 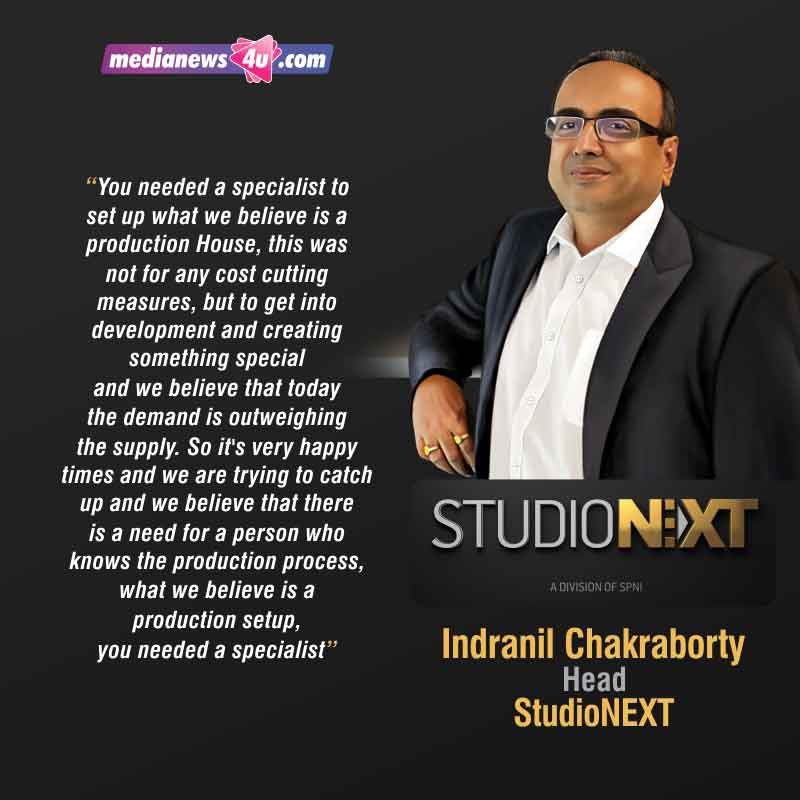 Taking over KBC would not have been difficult for you?

Fortunately, at that point in time, the KBC format IP is owned by Sony, so it was easier for them to do it. When Siddharth left and if the whole team would have also quit I am sure Sony would not have given it to Synergy. It was more tactical in nature, the big mission was, you begin with this, which adds fuel to your systems and processes and we moved on very quickly. I was fortunate to produce Scam and that was a stroke of luck and perseverance.

That is our history. But when we were working on SCAM it was just not about making another show and we dealt with it with a lot of butterflies in our stomach as it was in the backdrop of the stock market and finances. Our thoughts were as to how many people will even watch it or come to even understand it. But all’s well that ends well and rest is history. 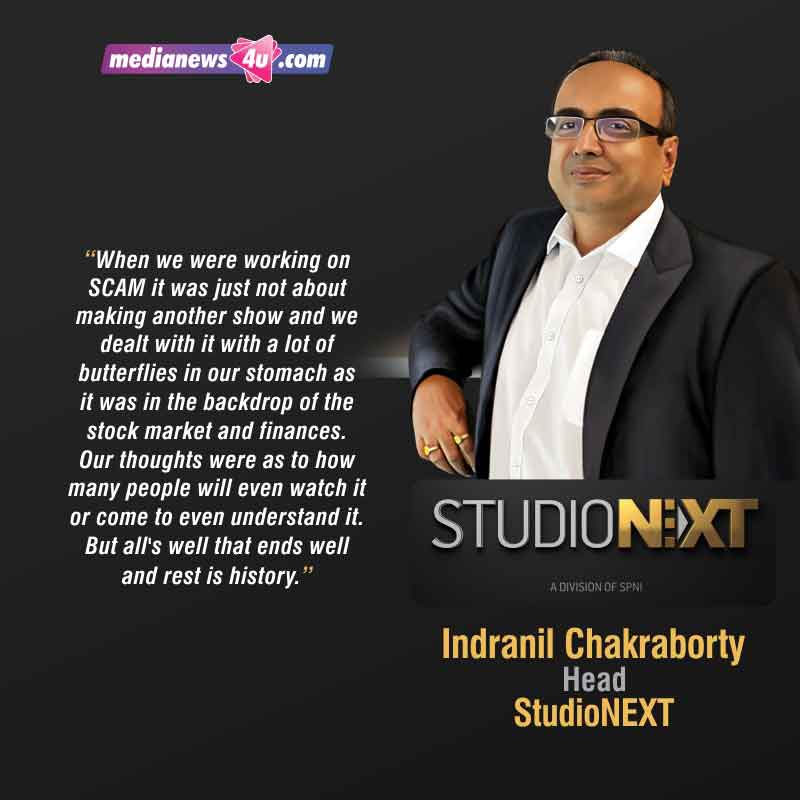 What made you produce a fiction show and that to a finite series?

When we set up StudioNext, our main aim was to collaborate with creators. We are on a collaborative model to do many things. This is not the first time we are doing a fiction show. In 2020 we did a fiction show called Ek Duje Ke Vaaste Season Two. This one excited us because we were collaborating with Nilanjana Puryakasstha who is the creative head of the show; the story is not like a regular television fiction where you write on a weekly basis. Here we have shot all the episodes at one go. We believe that it’s a great show somebody somewhere in some form is going to watch it

The credit for this goes to Danish Khan EVP & Business Head – Sony Entertainment Television, Sony LIV & StudioNext. He believes that when you create a good show and the rest will be figured out. We are very happy because we were given this chance.

We have been working on this concept for almost two years. When we first started, one of the big things was that we should create content and specialize with the purpose that is there. We all have read enough about such topics in the last decade not only in India but also globally, about this whole seemingly unknown entity called Whistleblower.  I had read a book on the Pharmaceutical industry; it’s called ‘Bottle of Lies’. The whole concept is of an internal guy who complained about things not happening the correct way. Globally it is about Julian Assange, Snowden, and many such people. Such people exist inside an organization or government/ institutions and they are part of the system. 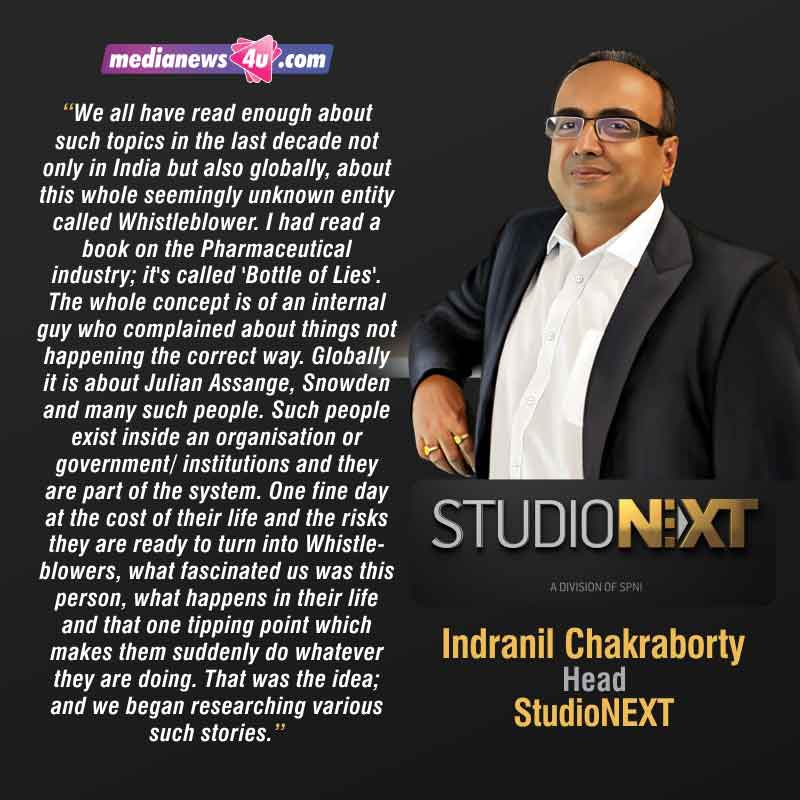 One fine day at the cost of their life and the risks they are ready to turn into Whistle-blowers, what fascinated us was this person, what happens in their life, and that one tipping point that makes them suddenly do whatever they are doing. That was the idea, and we began researching various such stories. The Whistleblower is the story of this young doctor who comes across and sees the irregularities in the Medical college admissions that are happening across various levels and what he does with it.

Will StudioNEXT look at producing shows for other platforms?

If your question is in the next six months will all our shows be on SonyLIV and SET, then the answer is yes. If you ask me that in 2023 or 2022 end will I see any of your shows anywhere else? The answer will be definitely and probably yes at least by the end of 2022.

StudioNxt was launched as a platform-agnostic production house. The scam was produced for Applause and Samir Nair wanted it to be on SonyLIV.Good shows take time to develop. We are in the process of developing a few good concepts which will come up in the next five to six months; SonyLIV decided to relaunch and reinvigorate their system and this was done on 18th June 2020. As StudioNxt and operating out of the same premises, they had seen us develop some good concepts, they decided to block our concepts and commissioned them, we could not say no to this opportunity.

Do we want to see all our shows across all platforms? As of now, we don’t have the time or the bandwidth to even think about that because our focus is now to deliver the shows we are working on. In the future you will see StudioNext shows on other platforms, we are in discussion with one or two people. I must tell you that fortunately at SonyLIV our experience and the turnaround have been a little faster. This is because of our knowledge of the system and elsewhere it will take a little more time in the contractual processes, understanding the go-ahead, creative go-ahead, budget etc. and it is time-consuming. So right now, the demand is outweighing the supply, we don’t have the time to think about whether we shoot and deliver or develop, shoot and deliver. 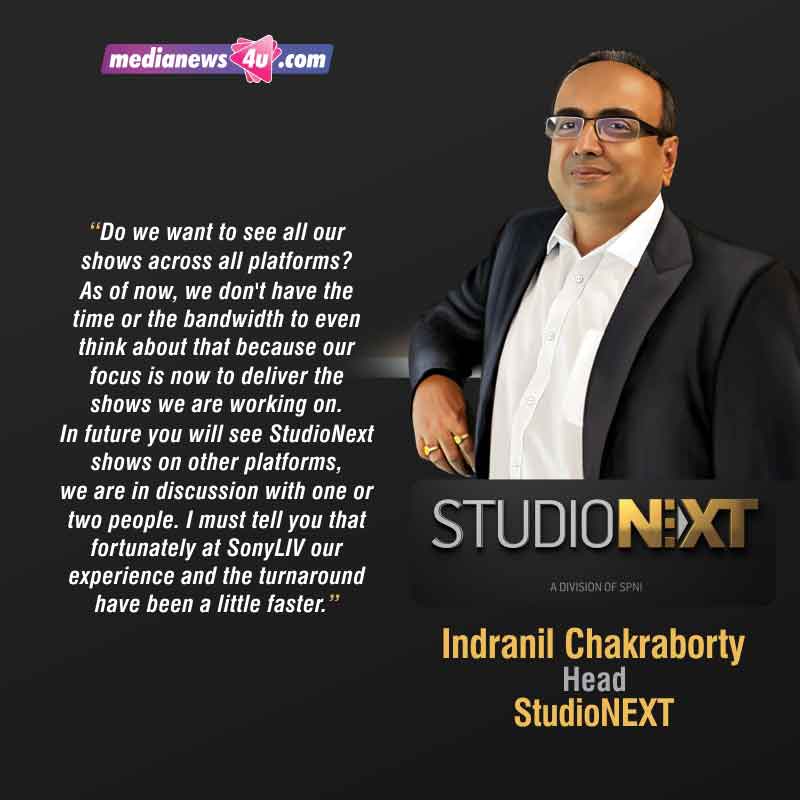 Regional OTT is seeing a lot of action now. Are you planning to get into producing regional for Sony LIV?

The answer is yes, but the bigger question is when. There are two things, that we have realized that what used to be purebred, what we call language content like Hindi or Marathi, but it has become a mixture of Hindi and English or Marathi and Hindi. Of late we are seeing shows where the actors are speaking in English, now how do you define that it is Hindi content but the actors are conversing in English.

In my understanding, there are two things about the language situation. If you put up a story in a world or in a space and time and that world leads to certain language expressions will remain true to that expression: we will not artificially put any other language dominance in that. If you watch The Family Man, it was well done and as the story is based in Tamil Nadu and Srilanka all the characters speak in Tamil, it is not forced. Today all of us are watching different language content with subtitles and not the ones dubbed n Hindi or any other regional language because in the dubbed version the nuances and expressions don’t match.

It is like if a story is based in Kolkatta, there will be a lot of Bengali speaking and people will not mind. So to that extent, we will be exploring various languages, if you ask me will it be pure Tamil or pure Bengali, the answer is yes. In 2022 we want to make a foray into that genre, but we’ll pick up land and language where we believe that there is a culture of storytelling, and there are a lot of stories. To that extent, a Tamil or a Malayalam or a Bengali or even a Marathi is of interest and not only because of doing the show there in that language, but also the cross-fertilization or cross-pollination of talent. The issue right now, as we say that it’s a problem of plenty and a problem of bandwidth. We will do it at a time when we are confident that we can give tender love and care and some focus and do it. 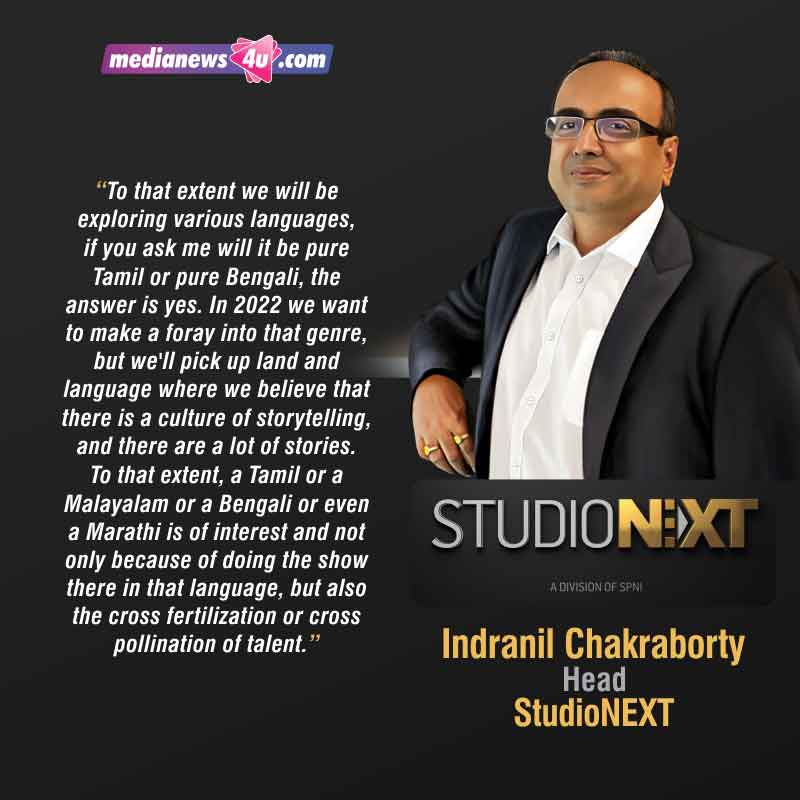 Our Focus in 2022 is all about the completion of all the shows we have in the pipeline. In 2023 we Willour development focus is 2023 -development, the scale of the story universe, it’s become more because of pure confidence and the fund availability by various platforms. We are developing shows, initially, when a project is in the developing stage the budget is kept in mind right now, we are not keeping any budget in mind, which gives us the liberty to develop it, and then see where it goes. To put these projects on air in2023 or 2024 phase the work needs to begin now.