TAM Shared the report on celebrity Endorsement in the year 2020. As we all know, Celebrity endorsements have been prevailing in India for a very long time, there is an increasing challenge for brands to capture people’s time and focus. According to the report, marketers believe that brand ambassadors provide a higher degree of consumer recall. This is based on a pretty simple logic as India is a country where people are star-struck by Movie Stars, Sports personalities, TV Actor & Actress. People idolize them and so, when they are seen in an advertisement promoting a product, it helps in building a better brand Image, Spreading Awareness, connecting consumers emotionally, creating a unique identity, and in turn increase product usage.

In Celebrity vs. Non-Celebrity Ads, there was More than 20% share of the ads’ telecast on TV was endorsed by celebrities. From the Celebrity professions, Film stars together added more than 80% share of advertising during Y 2020 followed by Sportsperson and TV stars that added 14% and 4% share respectively.

During the pre-Covid period i.e., Jan-Mar’20, the Celebrity endorsement was more compared to the same period of Y 2019. During the period during complete and partial lockdowns, ads endorsed by celebrities saw a dip compared to the same period of Y 2019. With the beginning of the festive period i.e., Aug’20 onwards, celebrity endorsement ads again sailed above the mark of the same months of Y 2019. 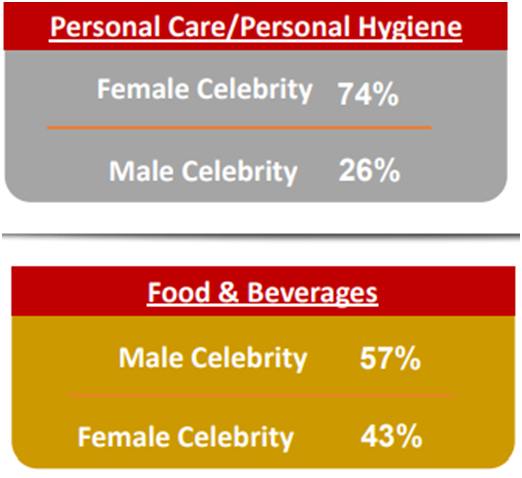 In the Gender dominance split into Top 2 Sectors, ‘Personal Care/Personal Hygiene was dominated with ads endorsed by Female Celebrities while ‘F&B’ sector’s advertisements dominated by Male Celebrities during Y 2020. The Avg. ad endorsing ratio of Male and Female celebrities for the Top 10 sector was 53:47. 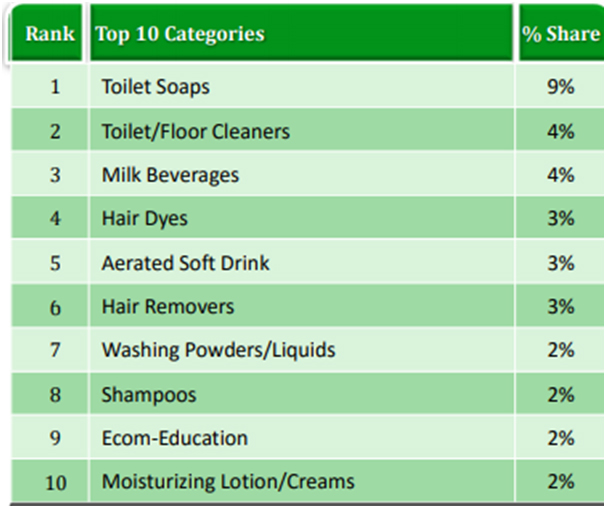 Top 10 Categories accounted for 34% share of overall ads carrying celebrities to endorse it. ‘Toilet Soaps’ was the top category with a 9% share of celebrity ad volumes during Y 2020 followed by ‘Toilet/Floor Cleaners’ with 4% share. 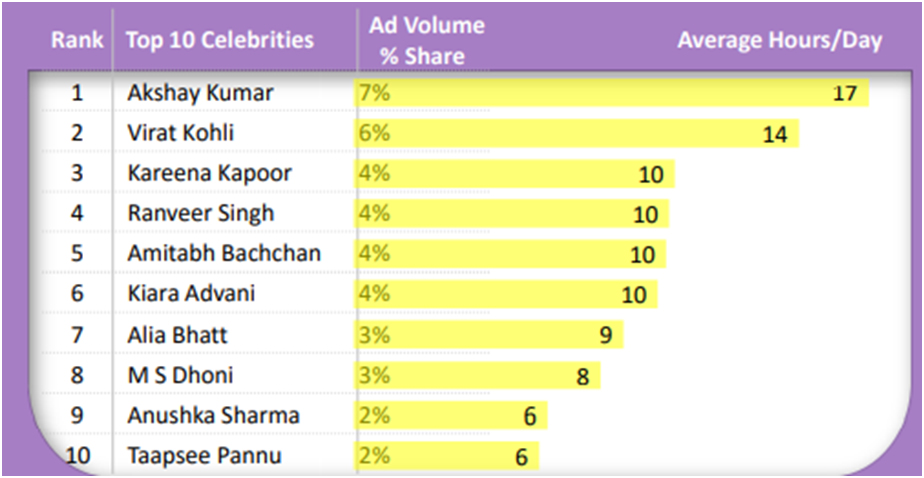 With an average visibility of 17 hrs/day across all channels, Akshay Kumar topped the list of the most visible celebrity followed by Virat Kohli with 14 hrs/day through endorsements done on TV. Kareena Kapoor was the only female celebrity among the Top 5, whereas, there were equal no. of male and female celebrities in the Top 10 list. 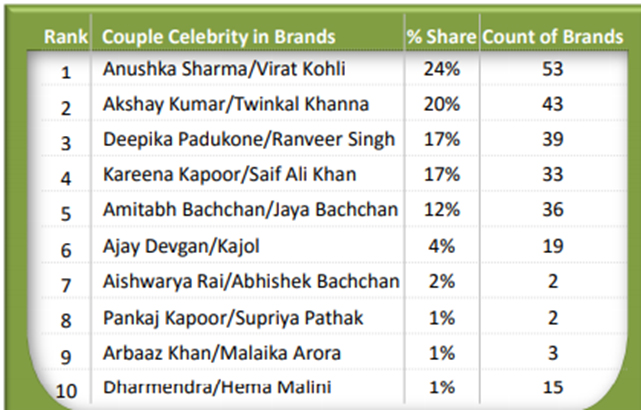 More than 40% of ads were endorsed by two celebrity couples – Anushka Sharma/Virat Kohli & Akshay Kumar/Twinkal Khanna, and both the couples had endorsed 53 and 43 brands respectively during Y 2020.

Young Female Celebrities were preferred over their Male counter-part, but the scenario changes when it comes to celebrities of age 50+ group.

Sudeep Kumar has been elevated to the role of General Manager- Media Solutions, Mathrubhumi Printing & Publishing Co. Previously he...

Global End-of-Year Forecast that shows a much faster expansion in the advertising industry than previously anticipated, driven primarily by growth...