In order to commit itself further towards simplifying content consumption for people in India, Tata Sky, India’s No.1 DTH platform unveiled its new Brand Purpose with the following statement – ‘Tata Sky exists to make tomorrow better than today for family and home.’ As the industry leader, Tata Sky is now present in over 22 million households across the country.

Aligned with this new brand purpose, Tata Sky has launched a campaign with the slogan “Isskhidkikokholdalatoh life Jingalala,” where ‘Khidki’ is an embodiment of entertainment which, via Tata Sky, provides moments of emotional gratification in the everyday lives of people.

Tata Sky’s new campaign will be communicated through multiple media channels across languages such as Hindi, Marathi, Telugu, Tamil, Kannada, Malayalam, Bengali, and Odia. The TVC takes us through the lives of families and individuals at home through the point of view of TV as they celebrate, what appear to be moments of togetherness, learning, camaraderie, and happiness. On Social media, engagement will be driven through the #HarGharKiKhidki campaign that will highlight the candid and unfiltered emotions of our audience through the lens of Tata Sky. The campaign will feature famous influencers asking their followers and other content creators to participate by making Reels of their family enjoying entertainment on Tata Sky using the original audio of the TVC to create brand recall.

In an exclusive chat with MediaNews4U, Anurag Kumar, Chief Communications Officer, Tata Sky talks about the new campaign and how they have enabled the common man to be part of this campaign…

The whole campaign is very beautiful, what was the thought and strategy behind this campaign?

The idea stemmed from Tata Sky’s new brand purpose – Tata Sky exists to make tomorrow better than today for family and home. We wanted to translate this for our consumers and the simple thought that came was that we all look at television screens and mobile screens, but what if we just turn the screen around and the perspective now becomes how the screen is watching us when we are consuming content. That’s how we arrived at the concept of ‘IssKhidkiKoKholdalatoh life jingala’. 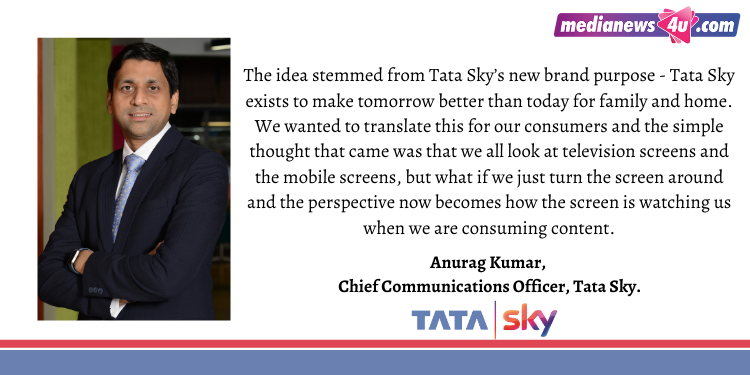 Why was the word ‘khidki’ chosen? What does it mean to a common man?

‘Khidki’ is an embodiment of the screen which is a magical element in our lives. And it is mostly television as a screen that acts as a window to the outside world. For a common man, Television acts as a Khidki that informs, entertains, and educates him. We used Khidki to show the emotional moments, the happy moments that people have in front of the television screen. It showcases the camaraderie, togetherness, etc. that one feels or experiences while watching TV. 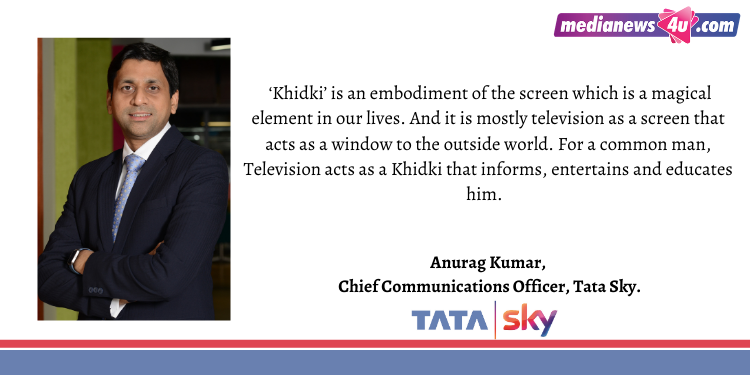 When the NTO was implemented we saw many becoming cost-conscious when choosing channels, how have you kept your consumers satisfied, what were the initiatives taken?

TV existed in the form of cable even before we entered the market but today, we are one of the largest players in the DTH sector. This has happened because some people who were on other entertainment sources such as cable decided to move to a brand like Tata Sky because they believed it was offering a better, upgraded experience. That story will continue, and it has continued even when NTO happened. As far as cost is concerned, we have very affordable packs for every kind of customer as we believe we are in the business of connecting to the best content in the world on any budget, on any screen, anytime, and anywhere. TV watching is nearly universal in India. There is a lot of room for growth for people who might be on cable today and are looking at upgrading their entertainment experience in the future. 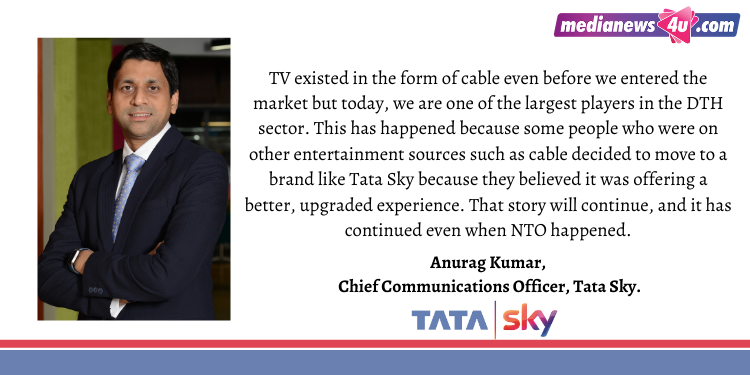 During the lockdown with digital seeing a surge and OTT taking the lead did you see subscribers opting out of Tata Sky?

Broadcast Audience Research Council, (BARC) India in the third edition of its yearbook titled The Year After Two Thousand & Nineteen revealed that the total TV viewership in India grew by 9% in 2020. COVID-19 forced people to stay confined to their homes and viewers turned to their favorite mode of entertainment and news – Television. TV played a significant role in keeping people connected with the outside world during the lockdown. With the telecast of classic old daily soaps, television provided an opportunity for good family time together. After July, we went back to pre-lockdown levels of viewership with new GEC content and live sports taking center stage. 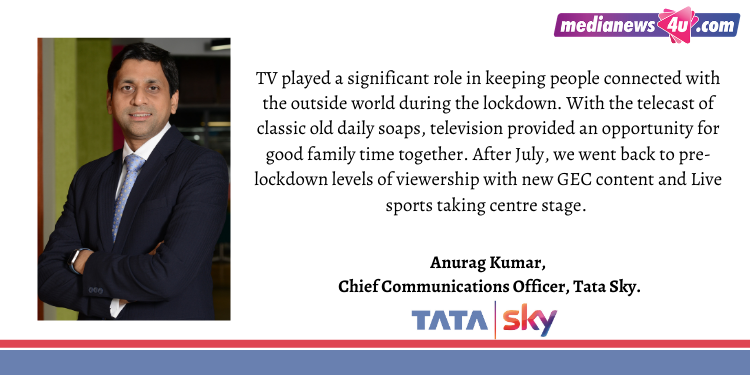 This whole campaign opens up a new vista for Tata Sky, what with asking the common man to participate, the initiative behind this?

We have launched a new social media campaign ‘HarGhar Ki Khidki’ in tandem with the new Brand Purpose statement – ‘Tata Sky exists to make tomorrow better than today for family and home’. The campaign highlights the candid and unfiltered emotions of the viewers from the perspective of Tata Sky being the Khidki of entertainment in every house. It has been carried out leveraging the Reels feature on Instagram. As part of this campaign, we are encouraging common people to express their emotions and reactions while watching TV through relatable instances that happen daily in every household. The Reels created by them will be collated in a video featuring the best entries to make ‘The Khidki Anthem’. 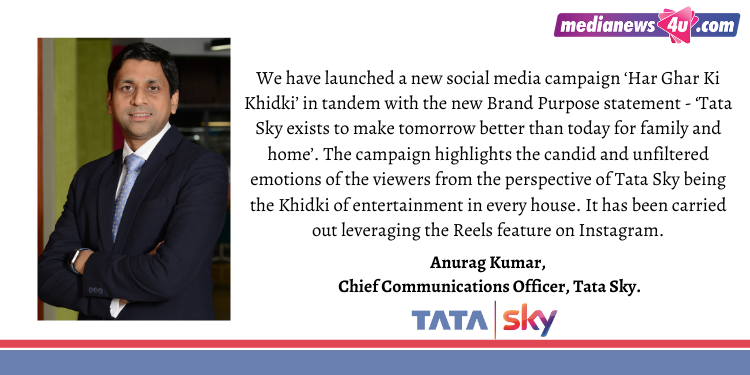 Is the campaign only on Tata Sky households or are you also trying to woo other DTH subscribers to Tata Sky?

We are targeting people who are looking for a better and upgraded TV viewing experience. They are the primary source of growth for Tata Sky in the future. Our new purpose statement ‘Tata Sky exists to make tomorrow better than today for family and home’ is a testament to the fact that we’re trying to improve what people get when they opt for Tata Sky. We want to enhance their lives and give them a better experience over a period of time. 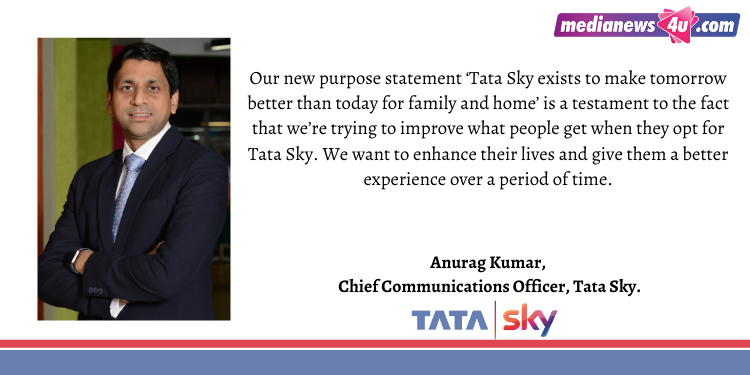 Presently you are the leader in the DTH segment, what would be the marketing initiatives to maintain this position?

We believe that going forward marketing efforts will be a combination of something which is national, thematic, and emotional in nature. But at the same time, they need to have local connect focusing on function and feature, which can help people decide about adopting the brand for the long run. For the national level, we have just now rolled out our ‘Isskhidkikokholdaalatoh life jingalala’ campaign in tandem with our new brand purpose. On the local front, we have already rolled out region-specific campaigns in few markets. For instance, we’ve talked about the benefit of 24/7 customer care in the Bengal campaign. While for the Punjab market, we talked about a particular type of pack where you get a lot of genres, and for Kerala, we spoke about the ease of adding and dropping channels. Likewise, we will be introducing more such hyper-local campaigns throughout the year. 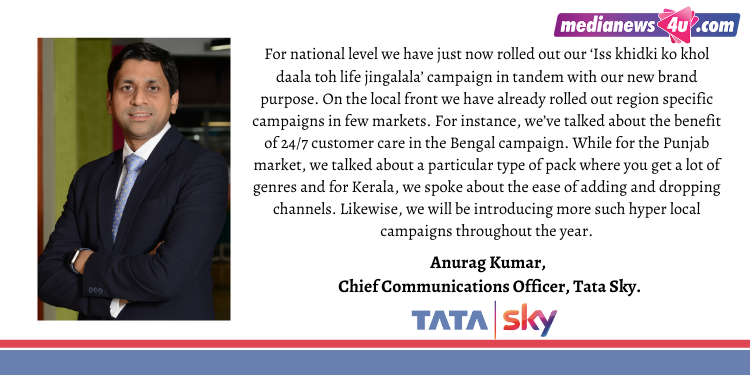 2021 we have stepped into a new normal, how are you seeing it and what would you be focusing on?

In 2021, we will continue to increase Tata Sky’s footprint into the remote parts of the country where people haven’t experienced the quality and benefits of DTH. Alongside our focus will also remain on building Tata Sky Binge as a platform as we believe there are a lot of customers out there who are interested in a proposition that combines TV and OTT together in a single device. 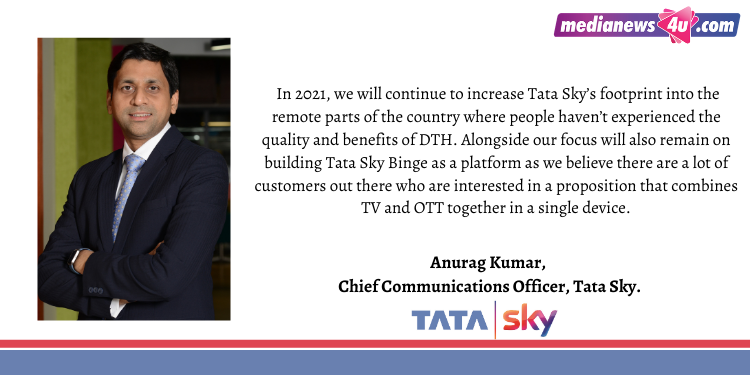