The biggest highlight of the year will be the launch of the 2021 ALL India Esports League: Tarun Gupta, Ultimate Battle

Ultimate Battle founded in 2017 is a subsidiary of Brainpulse Technologies Pvt Ltd. is India’s first-ever one-stop online esports platform for players to connect, interact and compete with each other in their favorite Esports title games for entertainment and rewards. The company is focused to design, develop, and deliver unparalleled competitive gaming experiences for gamers, the Esports community, and millions of esports fans around the world via esports tournaments and industry-leading content production.

Tarun Gupta, Founder, Ultimate Battle, in conversation with medianews4u talks on the rise of Esports in India, their USP, and much more.

Ultimate Battle, can you take us through the company’s journey and the challenges faced?

Ultimate Battle started its online journey in 2017 with the objective to break the geographic barriers that enabled real gaming talent to compete with each other online. Our launch was very promising and a learning experience that gave us insights into how we can further improve a gamer’s experience and what new features we could offer to the gaming community. 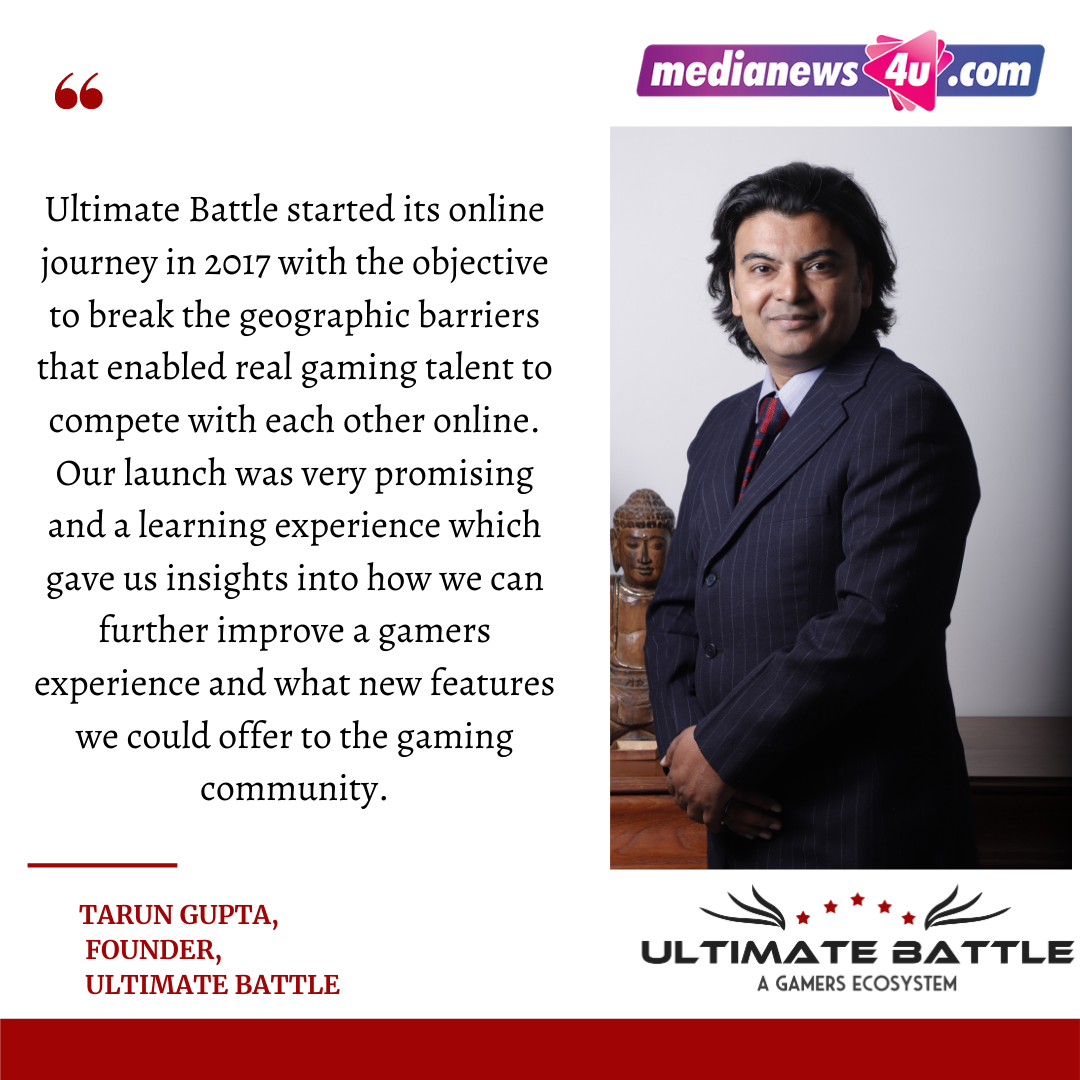 Since then the platform has evolved in multi-direction, we have added more games as well as introduced multiple formats of gameplay like challenges and leader boards. Currently, we host around 10 esports title games. I think we have come a long way and have been successful in giving our users a great gaming experience.

The main challenges faced have been educating a gamer around esports and familiarizing the user with the platform. Building the right marketing strategies, optimizing user acquisition, and ensuring re-engagement are some of the areas that were challenging. We have been evolving the platform ever since in terms of technology as well as user experience to make it as intuitive as possible. 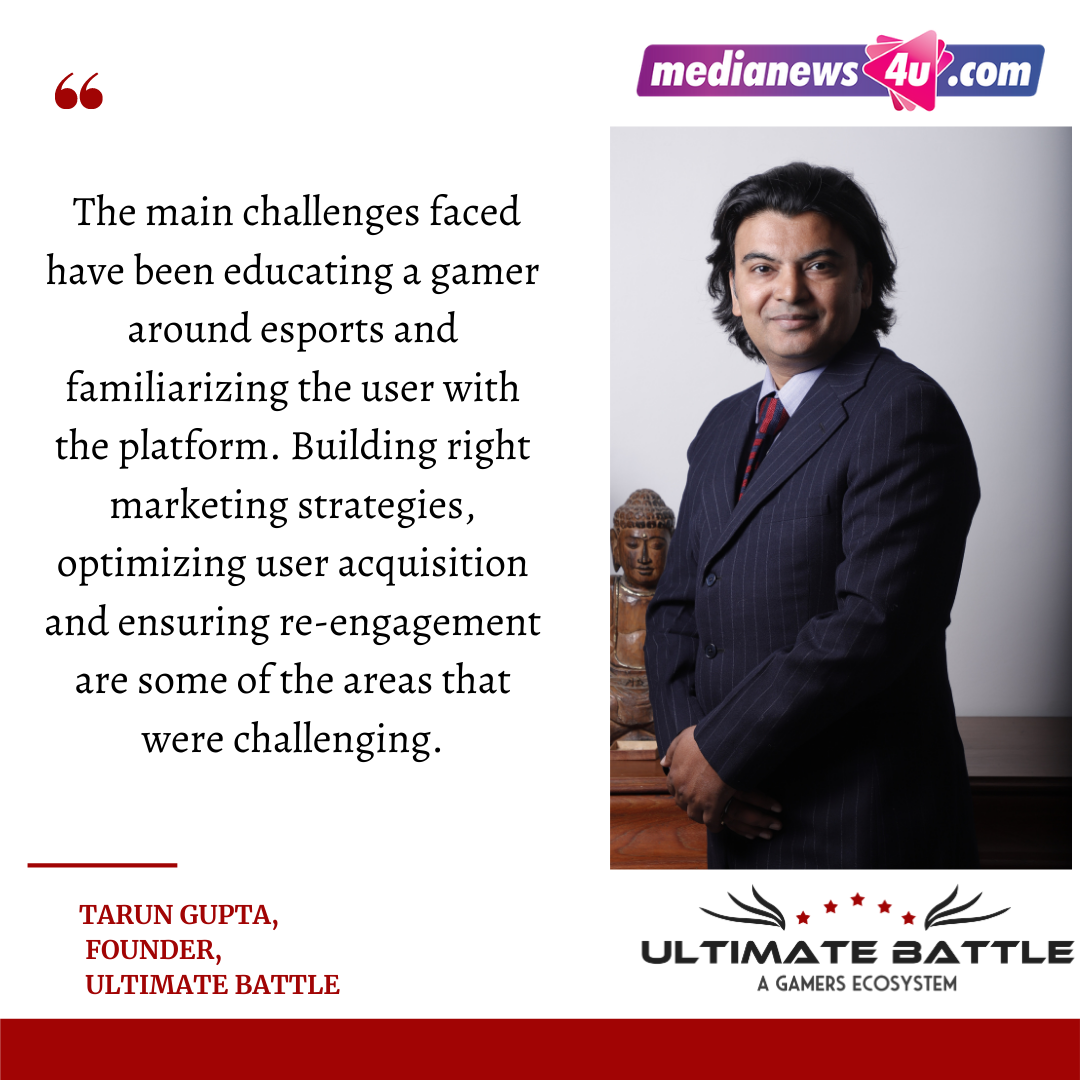 Esports is the new kid on the block, how have you navigated through this pandemic?

Pandemic as a situation had its pros and cons, while user acquisitions/engagement became better, with lockdown remote operations were nerve-wracking.

During the Pandemic, esports got much-needed exposure and our platform witnessed a great shift in gamer’s engagement behavior. since the Gamers were restricted to their homes and had all the time we could ask for, gamer participation on the platform increased dramatically. Our analytics show a dramatic spike in terms of user acquisition and monthly active users. 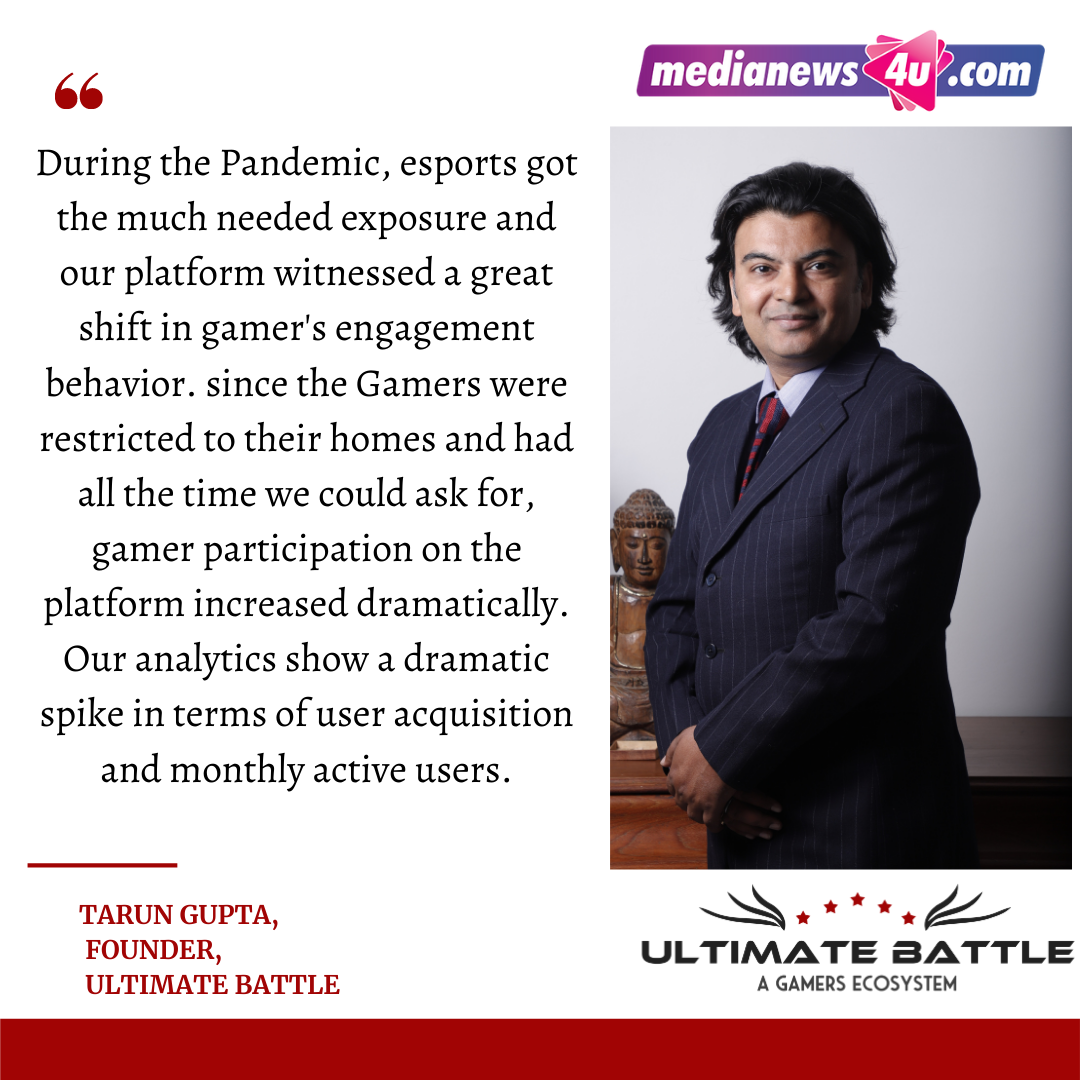 Overall Pandemic worked well for the business in terms of overall growth.

Ultimate Battle is the first home-grown One-stop online ESports Platform. What is your mission & Vision for future prospects in India?

Ultimate Battle’s mission is to build a platform that houses gaming communities of popular Esports Game Titles and enables organized competitive gameplay for gamers for award and recognition.

At its core, Ultimate Battle’s vision is to provide the gaming community with an ecosystem that becomes a one-stop experience for Gamers. Besides Gameplay, Ultimate Battle is working on multiple engagement fronts for our gamers in the form of Social Networking, AIEL (Esports League), News Portal, and The Game Shop. 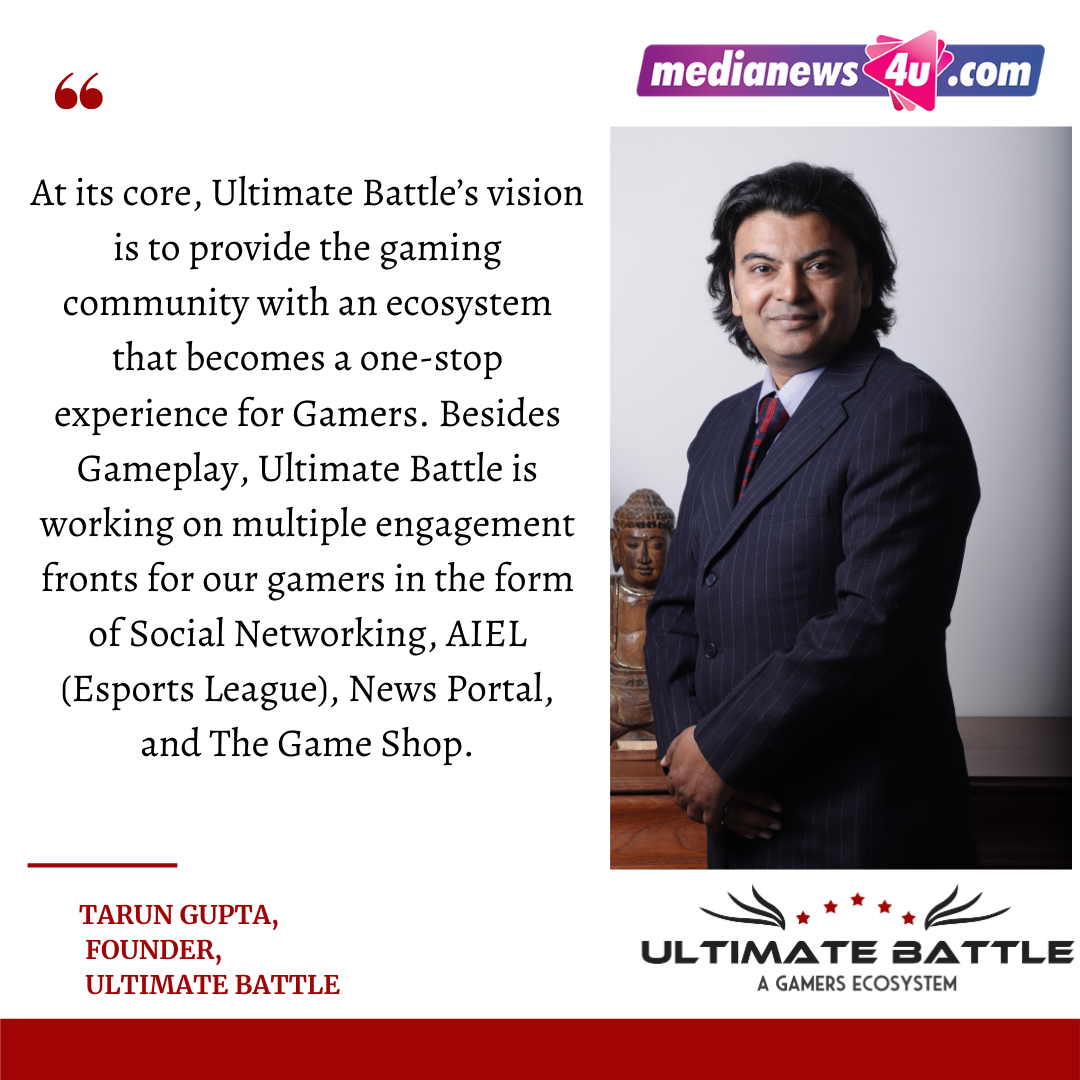 There is a plethora of gaming portals now what is your USP?

What was the strategy behind creating a 360-degree platform for gaming enthusiasts – Esports Titles Tournaments, E-commerce portal & Gaming & esports news?

The purpose of creating a 360-degree platform for gamers was to give the gaming community something that is not just limited to gameplay but also forays into other aspects/requirements of the gamers making Ultimate Battle a one-stop experience. The platform blends gameplay with social networking, news, and online game store beautifully to enhance the overall user experience. This 360-degree approach has also helped us in our user acquisition strategy. 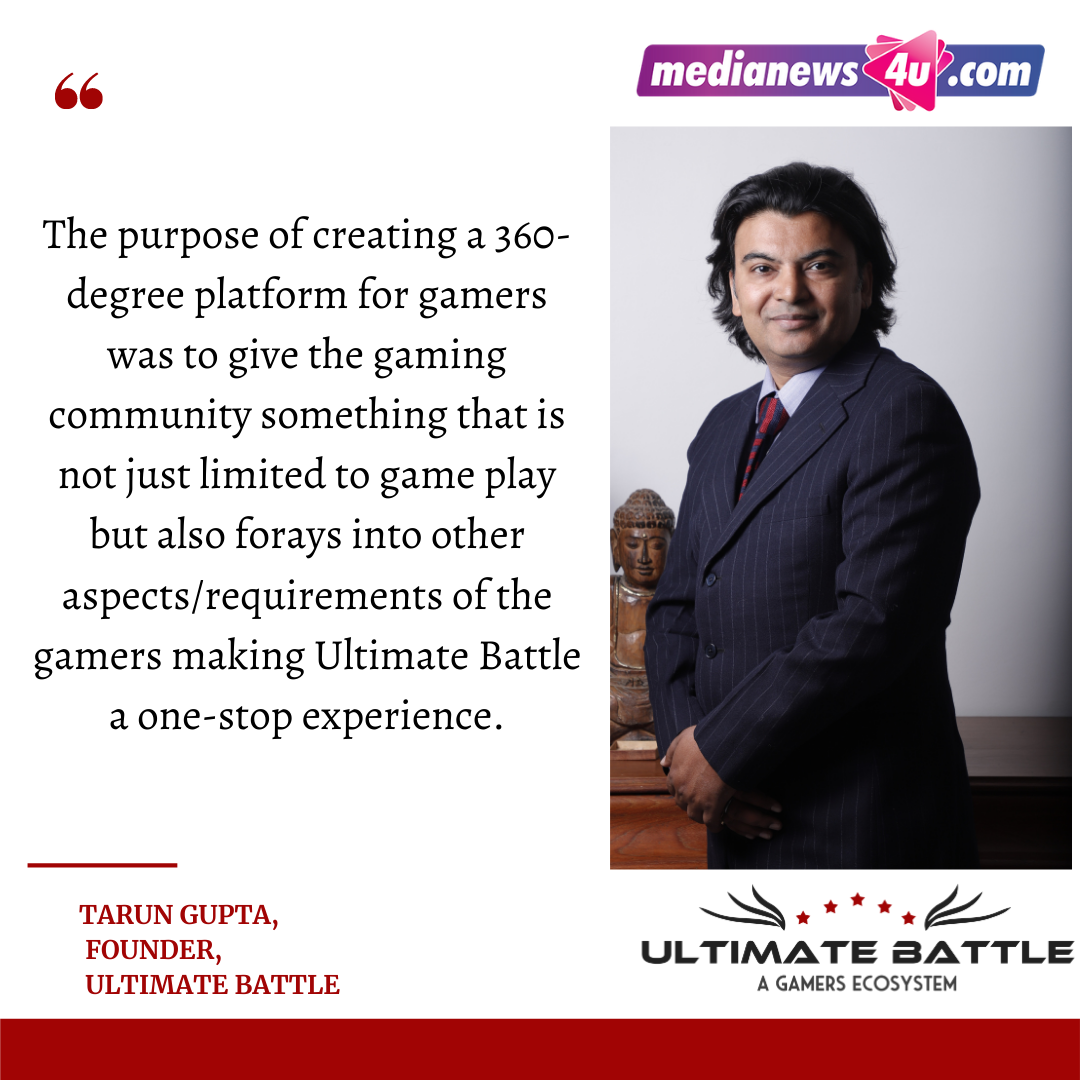 What is the market size for Esports and is it prevalent across all markets i.e Urban, semi-urban and rural?

In recent years, esports has become mainstream which saw a steep rise in India during a pandemic. According to Industry estimates, esports viewership increased to 17 million in 2020 which is expected to grow considerably in coming years. Esports in India account to 9.13% of overall revenue from the online gaming market according to the Inc42 report. This highlights the prevalence as well as acceptance of esports among the masses.

Esports are mostly prevalent in tier 1 and tier 2 cities. In rural India, it’s more of gaming than exposure to esports. Urban and semi-urban markets will be the budding grounds for talents as well as gaining viewership for the Esports events. What are the opportunities and also challenges in online gaming in India?

The current stats show we have 365 million Indian gamers across mobile, PC, and console which is projected to reach 440 million by 2022 according to industry estimates. This growth in the number of gamers will fuel the esports industry in a whole new way. Esports is still at a nascent stage in India and we are expecting positive growth in upcoming years.

The major challenge with the gaming industry in India is that it lacks a good legal and regulatory framework to support this industry. Esports is currently in its infancy and we are expecting things to mature as we move forward. 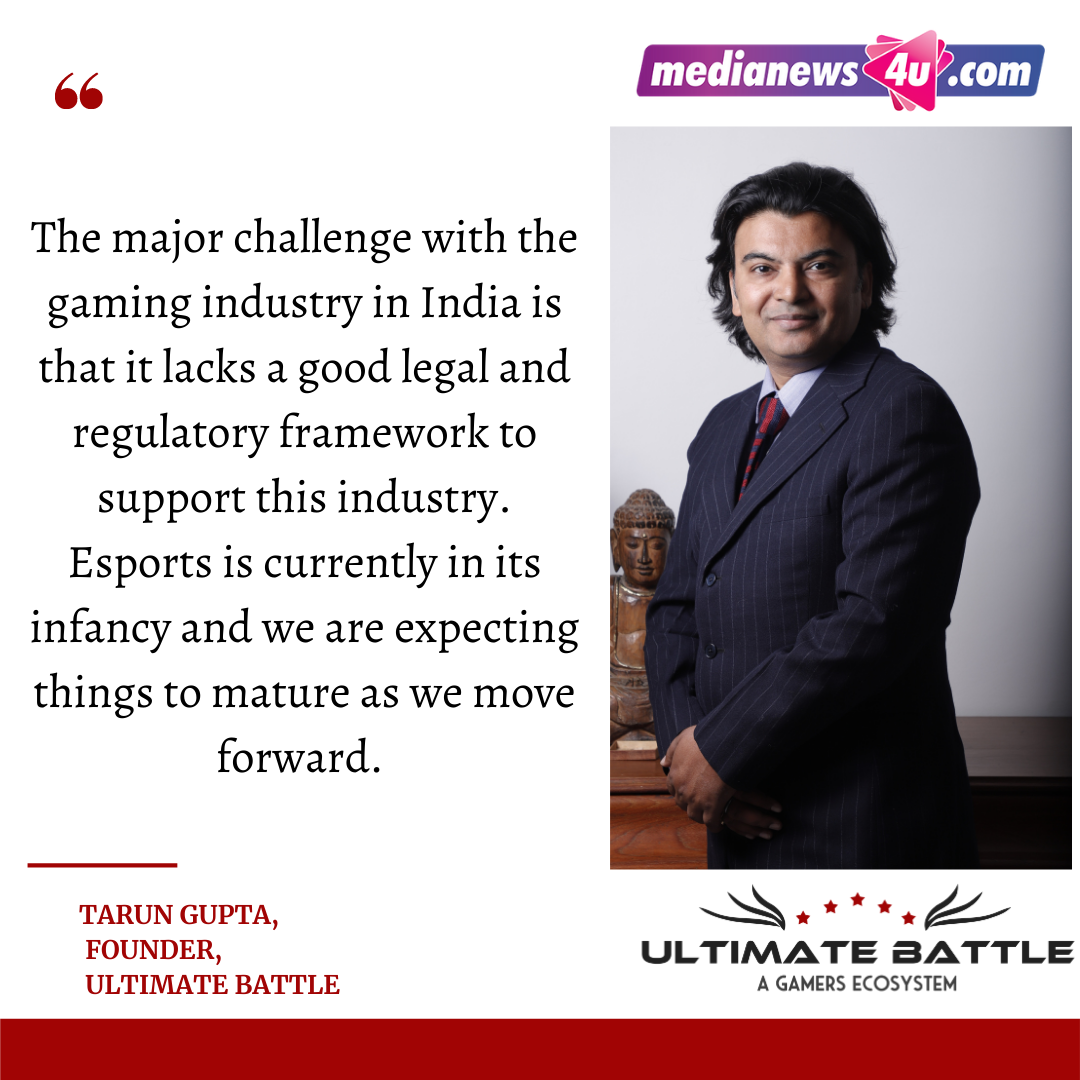 What will be your Focus in 2021 and the way forward for the Ultimate battle?

The biggest highlight of the year will be the launch of the 2021 ALL India Esports League, which is expected to go on the floor very soon. The League will feature some of the Top Esports Game titles along with Chess. In addition to this, we expect to add more games to the platform. We are also looking at introducing some great social networking features that will allow users to engage with the community in a better way.

How is Technology helping and determining the growth of the Esports industry not only in India but across the world?

With the current Internet and smartphone penetration, gaming has grown 2.5-times over the past 4 years. In the coming years with technologies like cloud gaming, 5G networks, and the arrival of more Esports Leagues being organized in an online format will break the location barrier of the event. All these will push the growth of the Esports industry in a positive direction. 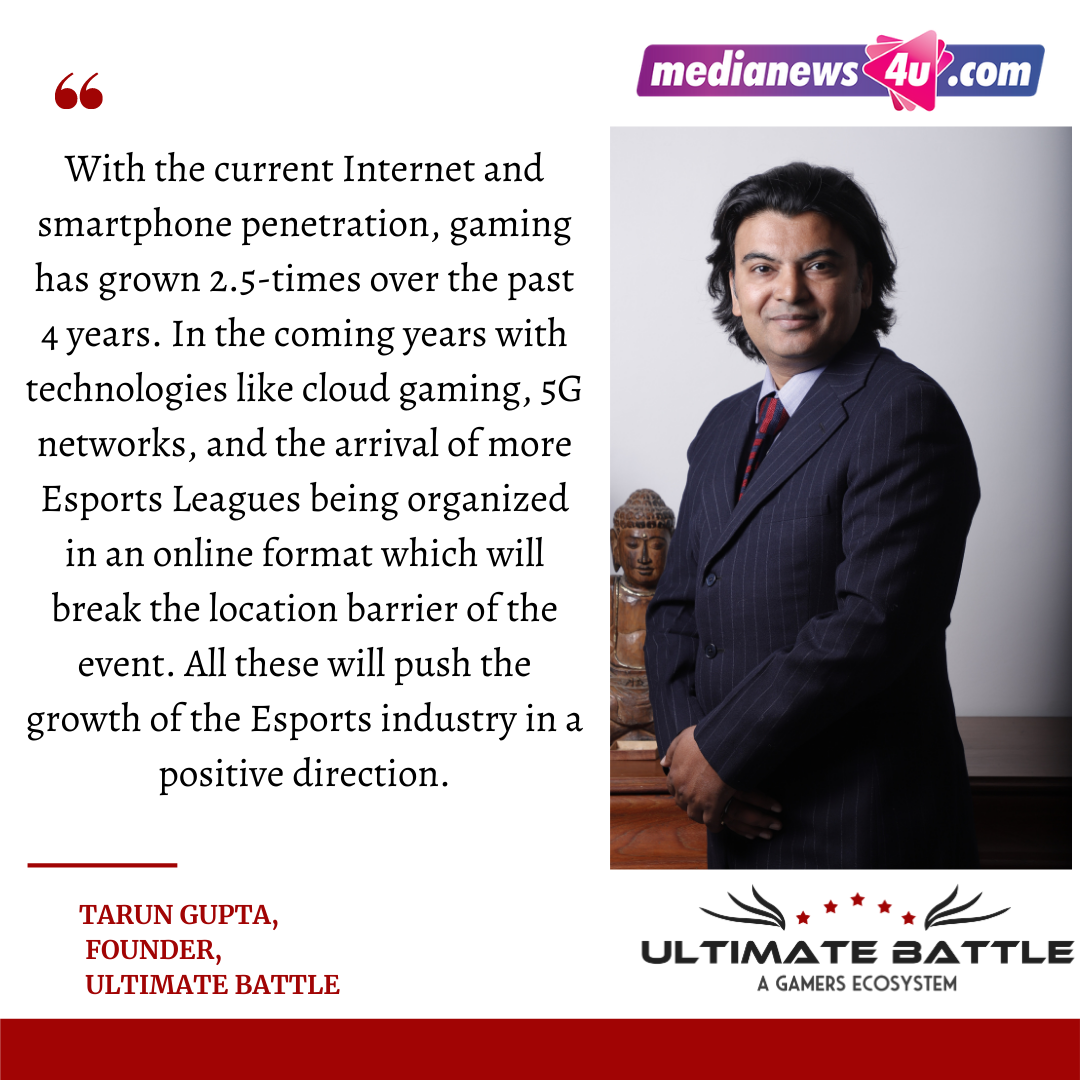 We’ve very quickly moved from enjoying a larger-than-life e-gaming experience in large stadiums across India to replicating the same experience in virtual stadiums that has been possible only because of technology. We are also seeing new technologies like VR gaming and Cloud Gaming, which will have a huge impact on the way gaming will be perceived in the future. Players, their teams, coaches, and the audience are all connected digitally. A comment window allows players to talk to each other and the streamer, bringing the gaming community closer together.