Chennai: The Hindu’s Total Readership grew by 11.8% over Q2 ’19, registering the highest growth rate among the top 3 national English dailies. The Hindu added 8,01,000 readers over Q2 to register a Total Readership of 75,74,000 in Q3 nationally, as per the Indian Readership Survey’s recent report released by the Media Research Users Council (MRUC) in the third quarter of the calendar year. 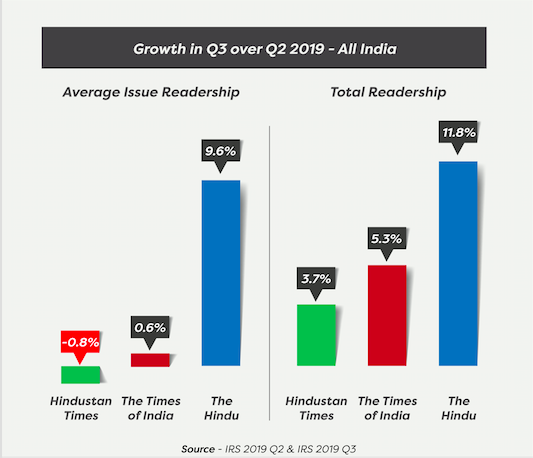 The Hindu’s Average Issue Readership grew by 9.6% over Q2 ’19 registering the highest growth rate among the top 3 national English dailies. The Hindu’s all-India performance is attributed to sustained leadership in Chennai, Tamil Nadu and Kerala and gains in Andhra Pradesh and Telangana, Karnataka, New Delhi and other parts of India.

L V Navaneeth, Chief Executive Officer, The Hindu Group, said, “As an organisation, we have continually worked towards delivering quality journalism, and we will continue doing so. The results have yet again reiterated the trust our readers have on a brand that has a long-standing reputation for credible and accurate news. The Hindu has been witnessing a growing readership in many markets. We are thankful to our readers and advertisers for the confidence and consistent support!”