The inspiration of the soundtrack came from finding a song that was very close to the soul and DNA of the brand: Puneet Kapoor, Lowe Lintas

Unacademy is an Indian educational technology company, based in Bengaluru, Karnataka, India. Originally created as a YouTube channel in 2010 by GauravMunjal, the company was founded in 2015 by Munjal, Roman Saini, and Hemesh Singh.

Unacademy has released a new film expressing gratitude to its learners, educators, and users – who the company terms as their ‘Believers’ – for making it India’s largest learning platform. To emphasize the message of gratitude, Unacademy struck off the terms ‘learners’ and ‘educators’, replacing them with the word ‘Believers’, reiterating that the music track chosen for the film was also a special tribute to them.

The film conceived by Lowe Lintas Bangalore opens with the popular soundtrack ‘Believer’ by Imagine Dragons. It takes the viewer through a day in the life of a young learner who experiences a larger-than-life projection of everything that the Unacademy platform has to offer. From India’s foremost educators to innovative interactive live classes on a wide range of courses, lessons from stalwarts in the popular ‘Legends on Unacademy’, the film weaves through these highlights. It also depicts different milestones in Unacademy’s journey with the message that the driving force behind its success is the overwhelming support of its ‘believers’.

Sonal Mishra, Senior Director, Brand at Unacademy & Puneet Kapoor, Regional Creative Officer, c in an exclusive chat with MediaNews4U  talk about the film, the need to do it during the crisis, and much more…

Today thanks to the crisis and education going online, what is the USP of Unacademy?

SM: Unacademy is a technology-first, consumer-first Company. Our vision to democratize education translates into two aspects. Ensuring the best Educators from the country teach on Unacademy in a live-class format, and breaking the barriers of geography and affordability through the use of technology. Today we have over 150,000 live classes conducted per month and around 49 million Learners from over 5,000 cities and towns who benefit from them. 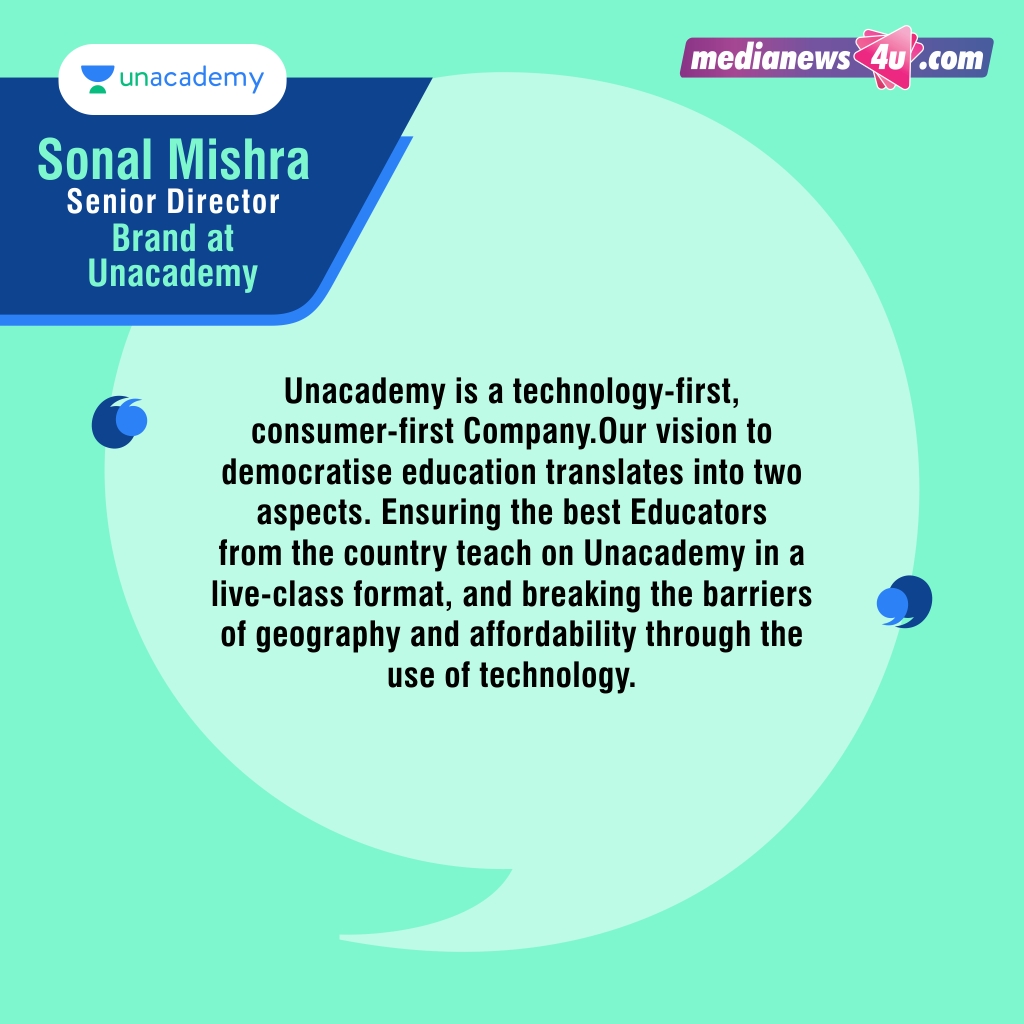 PK: Unacademy began its journey by democratizing entrance exam training, which had become a muddled industry where the business dynamics had thrown it out of whack with lack of ethics and integrity. Education going online is a pandemic induced reality from which all online businesses, education or otherwise have greatly benefitted. But it’s the substance and quality that a brand provides that separates the grain from the chaff. Unacademy has been constantly striving to up its game by getting the best educators and tech innovations on its platform, for the learners, which has been the USP that has kept it way ahead of any competition. 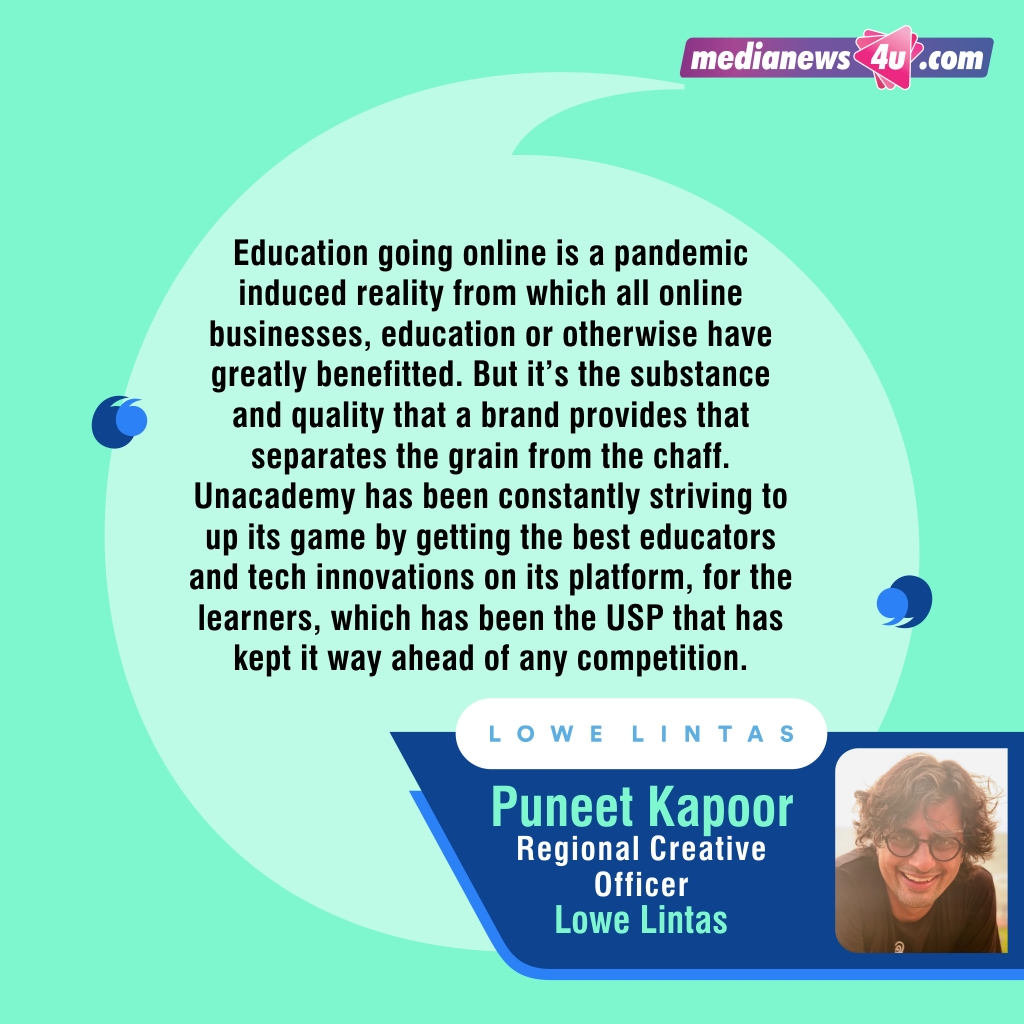 It is a brilliant film. What was the idea and strategy behind this film?

SM: The last few months have been extremely difficult, including for the student community, as the nation grappled with a ravaging pandemic. But through this period, our Learners’ unwavering focus on their aspirations helped us scale our efforts to become India’s largest learning platform. As a message of hope and gratitude in these difficult times, we decided to thank our Learners and Educators for believing in us. 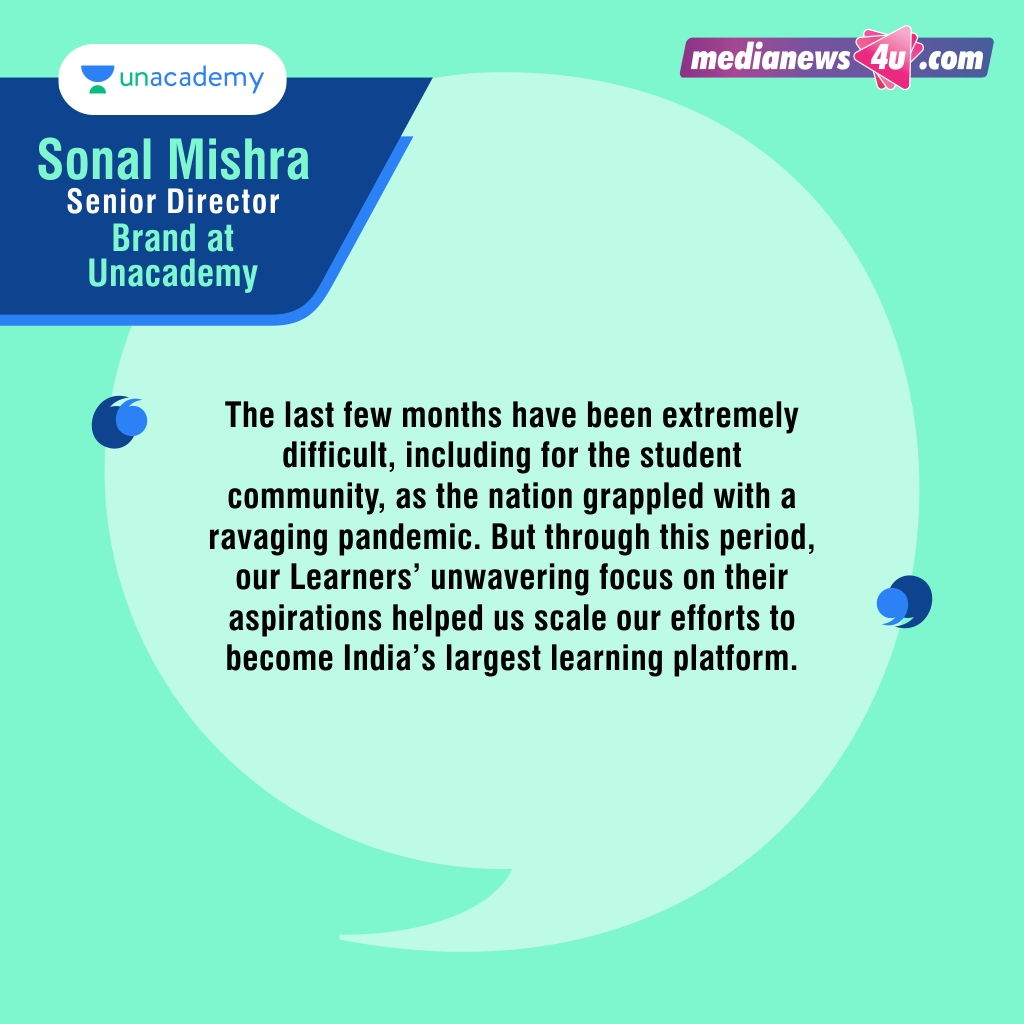 PK: Unacademy has had a great journey as a brand both business-wise and communication-wise. The idea was to inspire and express gratitude to our massive community for the stellar performance that we’ve managed with them, in the past 5 years with unparalleled data points. Showcasing the data points of the achievements (however impressive) is always a challenging creative task. The strategic focus was to make our community feel the pride and magnitude of what we have achieved with them in this fabulous journey.  The convergence of exceptional storytelling, treatment, direction, and a kickass track that vibes with the life stage of the brand were used to hit the sweet spot. 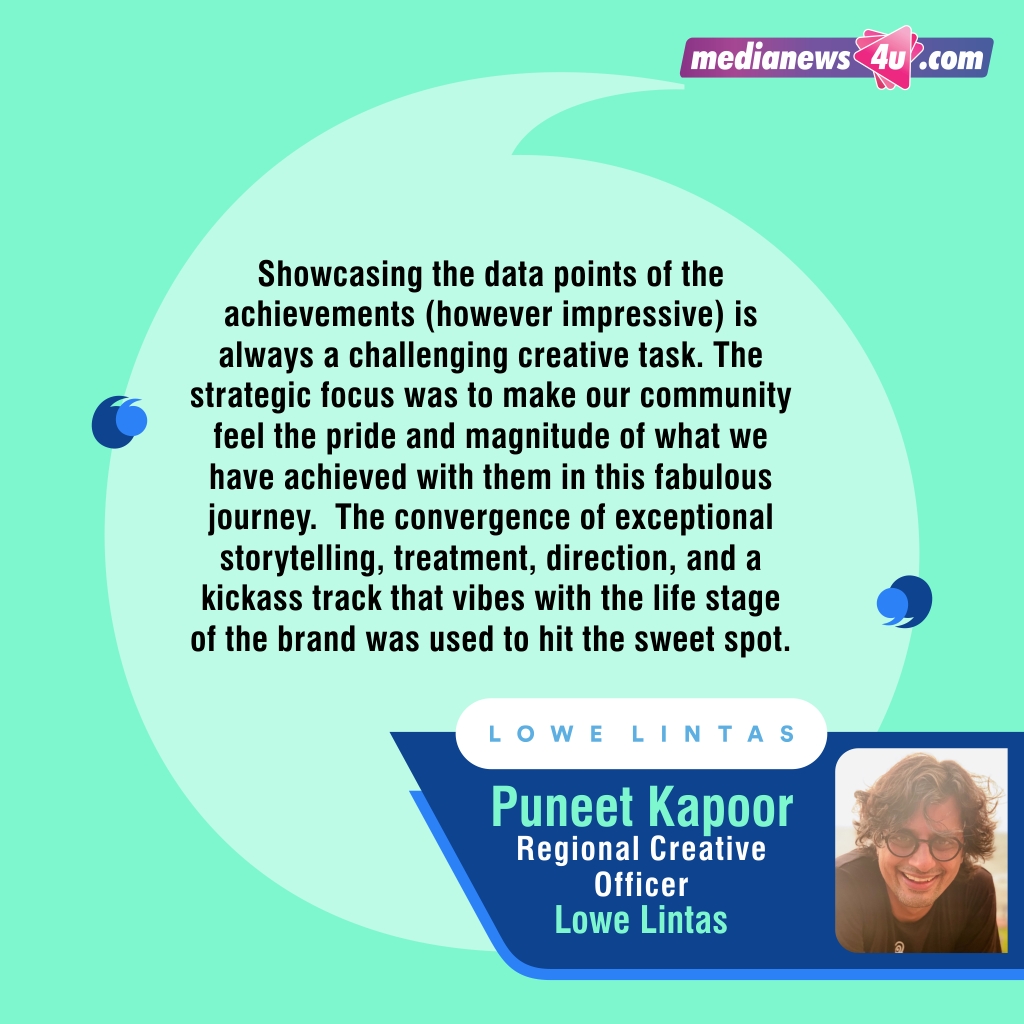 What was the brief to the client and the production to make this campaign different?

SM: The idea was to express gratitude to our Learner and Educator community for being the driving force behind making us the largest learning platform. The challenge was to narrate the story in a way that it resonated with our Learners while highlighting the key milestones of our journey. We agreed upon a treatment that depicted a single day in the life of an Unacademy Learner with a larger-than-life projection of everything the Unacademy platform offers. The music track was also specifically chosen as a tribute to our ‘Believers’.

PK: We converged on a simple execution brief to demonstrate emphatically, all of our achievements with a treatment which was a single day in the life of an unacademy learner’. The treatment was arrived upon with a series of brainstorming meetings between the creative teams and the production team. A special mention needs to go out for the director, AtulKattukaran of 1st December Films, and his team, along with Shiv Parmeshwaran and ArpanBhattacharaya, who are creative leaders at Lowe Bangalore. 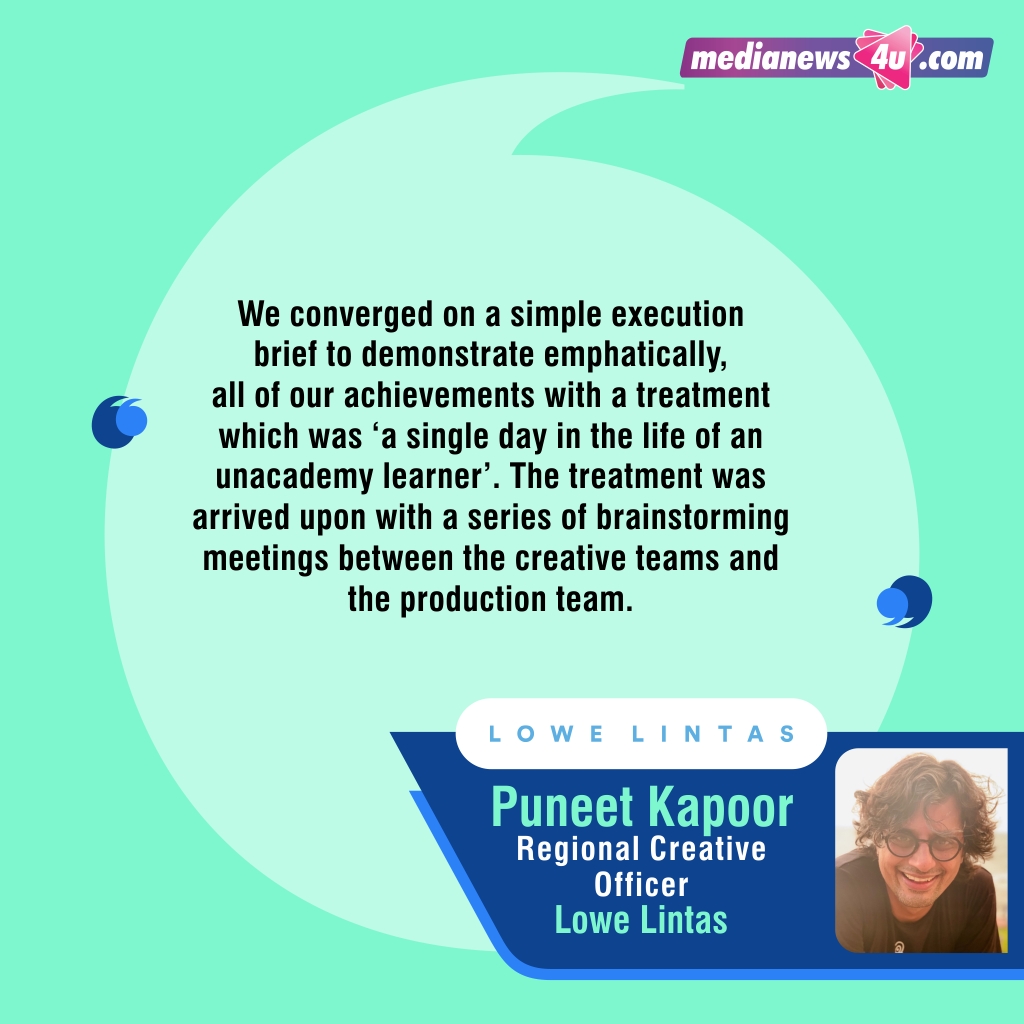 What inspired you to use this soundtrack?

PK: The inspiration for the soundtrack came from finding a song that was very close to the soul and DNA of the brand. A track that exuded the same thump of energy that the brand exudes when inspiring its learners. It was an extensive and interesting debate to pick from a playlist of hits, on one end and to try to compose a fresh track. But we pressed hard for ‘Imagine Dragons Believer’ leaning on the currency it already had in the minds and hearts of youth. And we’re glad that the marketing team trusted us and went with that call. 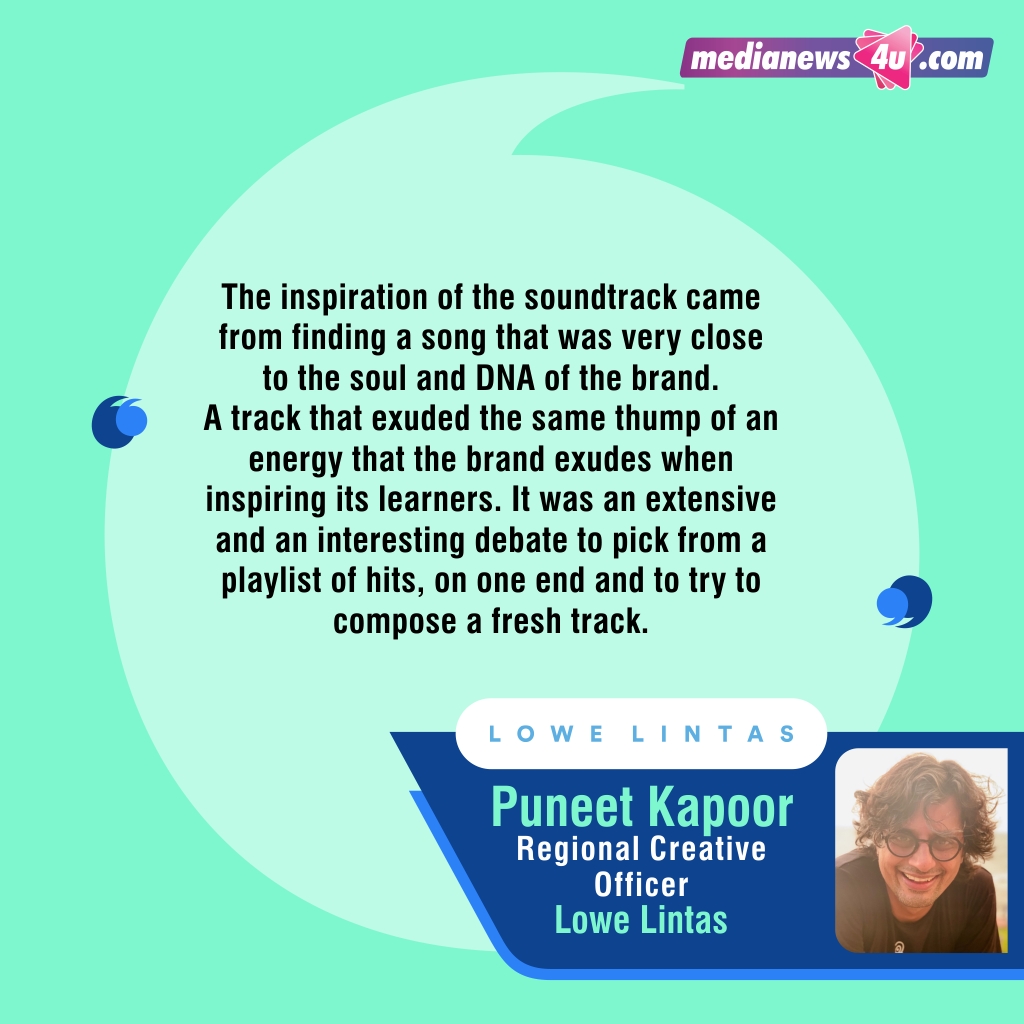 In this crisis and lockdown, how did you go about shooting this film?

PK: Well, actually the film was shot in the first quarter of the year, much before the second wave of the pandemic hit us. Even that phrase wasn’t easy to shoot in and I remember as soon as we finished the shoot and headed to the airport, we saw the CM of Maharashtra, across OOH screens, announce the lockdown.  It took a lot of editing details and post-work to get this film ready for release by June 2021. 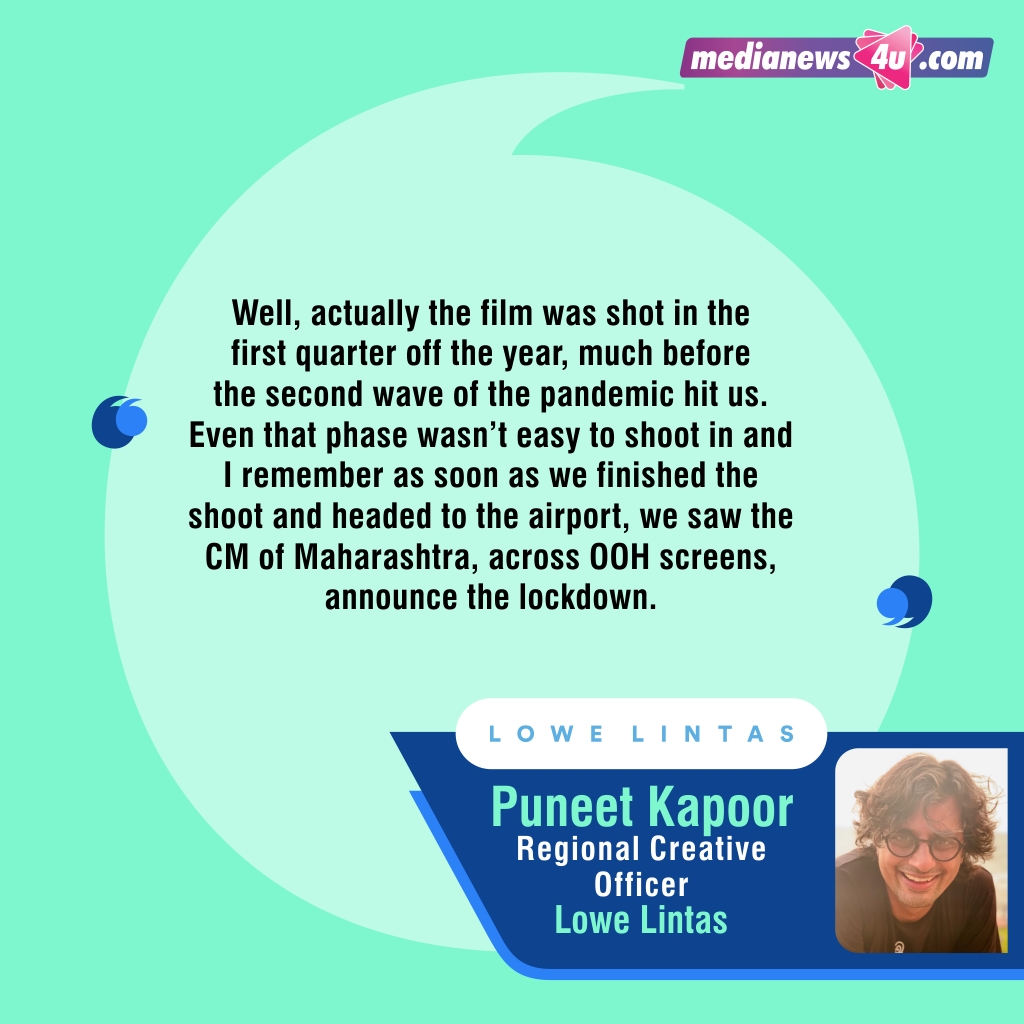 Marketing strategy for this film?

SM: “Unacademy Believe” was released across social media and digital platforms on July 17th, 2021. We struck off the terms ‘Learners’ and ‘Educators’, and replaced them with the word ‘Believers.’ Our marketing approach focused on making the initiative entirely about our Learners, attributing our success to their belief in our efforts. The amplification plan ensured that the film generated more conversations and engagements, instead of just views.

Chennai: Sun TV Network has entered the Marathi Entertainment Television space with the launch of Sun Marathi. The Channel went...

Is Invesco arm twisting Punit Goenka for refusing its merger deal with a Strategic Group?

Consumers keep trust towards the brand and not on the celebrities featuring in ads: AD Padmasingh Issac, Aachi Group

Royal Classic Group is a Rs 750 crore company made in India for Indians and by an Indian: T.R Sivaram, MD, Classic Polo

Dinsey and Star India is all set to rejig its list of channels on air with addition, omission and rebranding...