The potential and importance of Radio truly came to the forefront during the lockdown: Kartik Kalla, Radio City

Radio City, India’s leading radio network announces the 12th season of India’s biggest singing talent hunt on the radio – Radio City Super Singer, to uphold its legacy of turning the spotlight onto some of India’s brightest singing stars. The month-long contest will showcase some promising talents from across the country and crown 4 winners in the finale on 20th December 2020. Singing superstar, KailashKher, would be judging the contestants of this season and will reward the ultimate winner.

Kartik Kalla, Chief Creative Officer, Radio City, speaks on Super Singer, and even in this crisis the enthusiasm from the listeners .

Radio has been at the forefront in entertainment even during this crisis and lockdown. How did this happen?

Radio has once again proved to be a best friend and a forever companion of the listeners. During the lockdown while you were away from home or friends, we worked round the clock to ensure that our listeners get all the necessary updates and kept themselves entertained. The potential and importance truly came to the forefront during the lockdown. 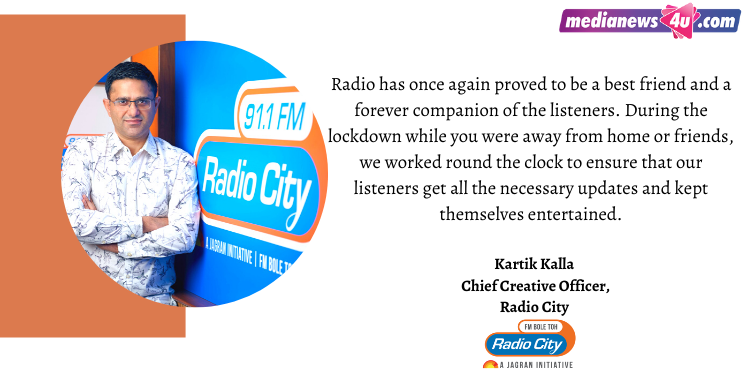 Radio proved to be one of the most sought-after media during the lockdown. Radio listenership saw a significant surge during the lockdown. As per the AZ Research PPL report, 82% of people tuned in to the radio during COVID-19, and the industry witnessed a listenership of 51 million people, an increase from the 48 million listeners before March 2020. The time spent by people listening to radio has also increased by 23% to 2.36 hours every day during the lockdown, second only to television. Radio continued to be one of the most easily accessed mediums and most credible sources of information.

‘Radio City Super Singer’ is your tentpole property, how different is it going to be this year?

We are super proud to launch the 12th season of Radio City Super Singer, with Kailash Kher as the face of the activity. One of the first ever, singing talent hunt on radio. We are happy Radio City has given some great singers to the music industry through this talent hunt.  This year, the auditions have already begun through the IVRS and missed call number n all cities, our microsite, along with social media channels. And we are supremely happy with the response we are receiving. Unlike previous years, this year we have slightly changed the format of the contest. The winners will be from Hindi, Kannada, Tamil, and Telugu speaking regions. The winners will be chosen through public voting and by everyone’s favourite singing star Kailash Kher himself across Hindi speaking markets and composer Ghibran, music director Chaithan Bharadwaj, and singer All Ok in Tamil, Telugu and Kannada markets. The winners will be announced on 20th December across all our radio stations and social media platforms. 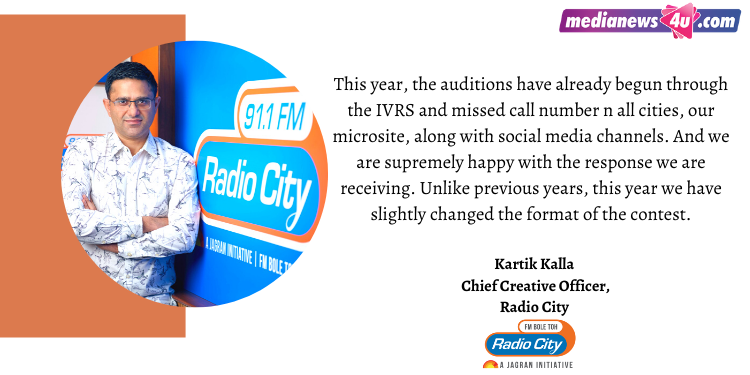 The tag line ‘Sangeet par koi lockdown Nahi ho Sakta’, how did this come about?

Due to the nationally imposed lockdown, there have been restrictions on people’s movements. People are just sitting at home and are not able to get a platform to showcase their talents. A lot of events and contests that happened annually were cancelled, adding to the plight of the talented youths. All in all, we are experiencing a lot of negativity and chaos around us. And at Radio City, we are committed to helping people and spreading positivity. So when the discussion of organizing the 12th season of Radio City Super Singer was initiated, we uniformly decided to execute it because sangeet par sahi me koi lockdown nahi ho sakta and we stuck to that thought and passed it as our tagline. Radio City Super Singer has been a platform dedicated to nurturing talents, celebrate the immensely gifted singers, and showcase them to millions of our listeners. 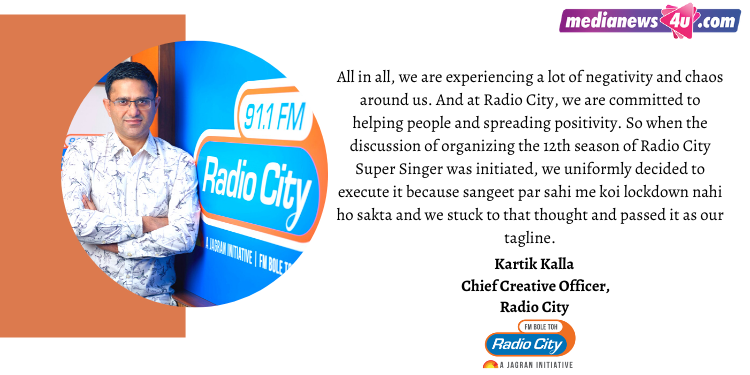 How did you market the announcement of the auditions for the show?

We leveraged our on-air and social media presence to get the word out. We have been relentlessly promoting the auditions across all our 39 radio stations. With the world being online, we are using the power of social media to the maximum to endorse this property. We have been posting about the auditions on our social media platforms and our RJs too have been doing the same across their social media handles. Not only us, but Mr.Kailash Kher too has been talking about the same through our radio promos. Apart from this, we are promoting Radio City Super Singer across various newspapers in the respective cities that we are partners with. 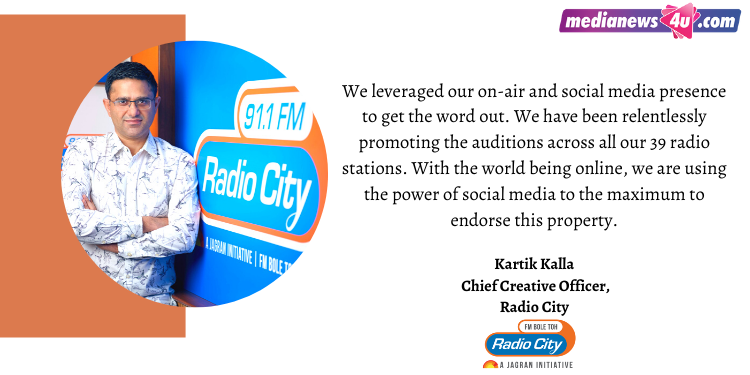 How is this show now going to be marketed, will you also look at OOH as the country is more or less opened up?

As mentioned above, we will be marketing the show extensively across all our radio stations, social media platforms, and the print medium. We are not looking at OOH promotion at the moment but maybe will think about it for next season.

As this is the 12th season of Radio City Super Singer, it would be safe to call it a legacy that Radio City and its listeners have nurtured and helped it grow bigger not only in scale but also in terms of engagement. Even though it has been a tough year, we have received some overwhelming response from our advertisers. We have seen requests flowing in to be part of the legacy that Radio City Super Singer is, and this is possible only because of the trust that our listeners and advertisers have bestowed upon us. Viacom18 Sports, India’s newest premier sports network, announced that JioCinema will live-stream all the matches and offer curated content around...