Voot Select is only 150 days old and we are seeing some very promising signs: Ferzad Palia, Viacom 18

Voot Select, India’s fastest growing premium video-on-demand service, is all set to launch its next big original The Gone Game. As a service that launched just on the heels of the Covid-19 pandemic, Voot Select has truly unleashed the potential of OTT. The Gone Game – a show that breaks the barriers of space and location to deliver on a gripping and compelling story.

Ferzad Palia, Head – Voot Select, Youth, Music and English Entertainment, Viacom 18, talks to us about the growth of Voot Select in a short time and the show, ‘The Gone Game’

What was Voot Select’s trajectory like during this lockdown?

It has been a phenomenal and a fantastic ride. Voot Select was launched on 2nd March, 2020 and that was just about two weeks before the lockdown came into effect. I think that sort of the timing, to be honest has worked wonderfully for us. With everyone confined at home, the need to consume some entertainment is just one part of it. I think what has really worked for us is that our content has worked phenomenally well. Our international content has worked extremely well with the winning seasons of Shark Tank and America’s Got Talent, which are some of our international marque shows. Our 24 hours before TV proposition that is working very well. I think it is all of our potential best estimates for the year in the first three or four months.

Voot Select is only 150 days old and we have also seen some very promising signs. Our monthly subscribers are renewing at a very good rate. We are seeing a lot of uptake of our annual plan indicating people are signing up to be with us for the long term. The time spent is in a very good space. Thankfully, all indicators currently are very good. We have done a lot of studies around the brand that is looking very encouraging. But obviously you cannot be sitting quiet during lockdown just because everyone is locked in. We came up with the idea of this phenomenal show ‘The Gone Game’ which I think is probably one of the first of its kind in the world where the director has notinteracted with the artists in person or even the artists have not interacted with other artists in person. It has been scripted, written and directed during the lockdown following all guidelines. Big Boss will go live on VOOT Select before TV. Why did you think of doing something like this?

Our strategy has been clearly a digital first strategy and properties such as Bigg Boss and some of the other non-fiction shows that we have in addition to the fiction ones enjoy high levels of fandom. So, as a network, we have invested very well in building fandom for each of our properties and it is very important to be able to give super enthusiastic fans, an even better experience and that is possible only behind the paywall. Whether it is a 24-hour stream from the Bigg Boss house on weekdays or whether it is putting the episode slightly earlier than TV and of course, since it is an ad free experience, a lot of our subscribers will enjoy it. Experimenting with content and various other opportunities will enable us to fuel more fandom for the property by giving these kind of experiences to our subscribers. We definitely expect some serious uptake of subscriptions during this period given the popularity and love for the property. 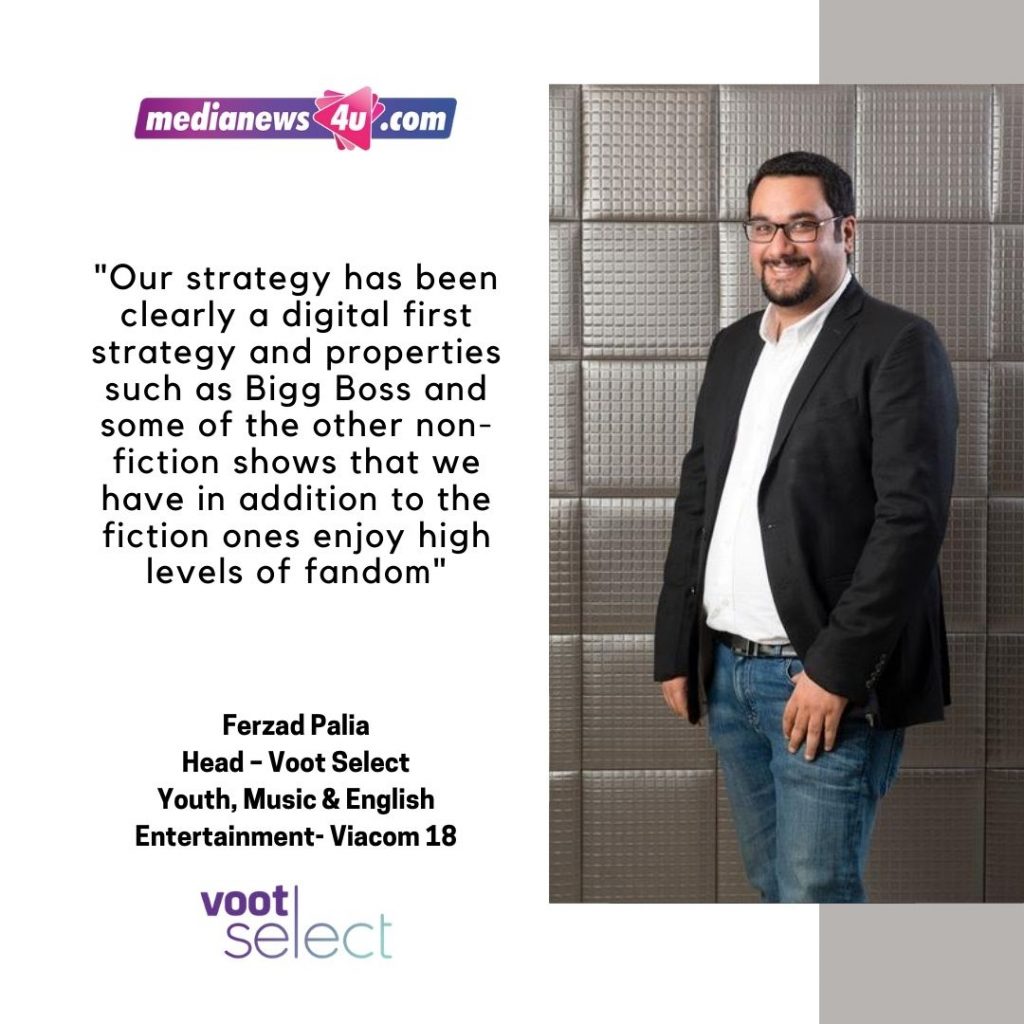 Will OTT continue to spike even with the lockdown lifted? Moreover,  with IPL happening, will TV see a surge andwill we see a change in content strategy?

IPL is a phenomenon in itself and the impact it creates every year is phenomenal. However, what we have seen in the past on a majority of our channels on television is that there is no adverse impact of IPL, barring, a couple of extremely important matches and the audience has also gotten used to that. It is an on-demand world.

The content ecosystem has beautifully evolved such that the consumer can consume anytime, whatever they want and on a device that they are most comfortable with or at the most convenient time. There are different properties, some of which are unusual and some are not. This is the world we are living in and we are not expecting too much of an impact at all. 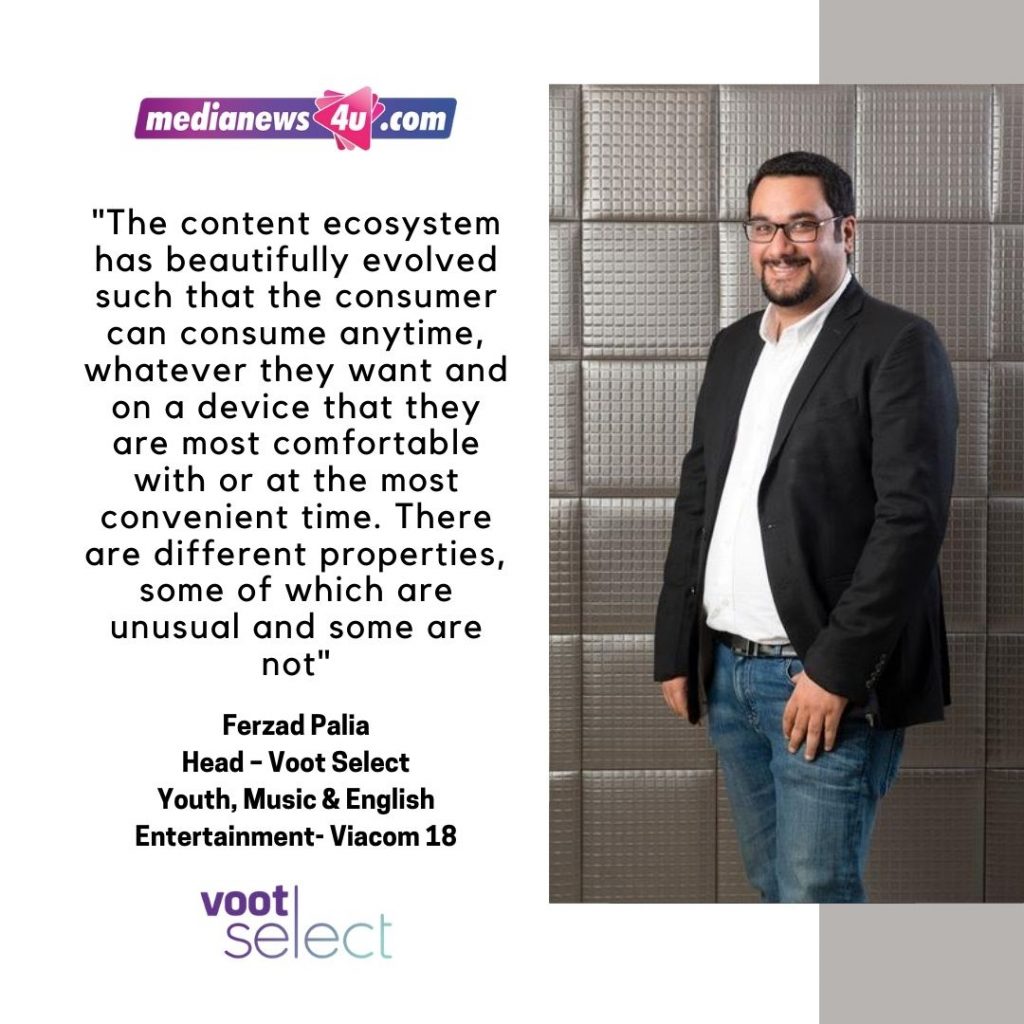 How did you along with the production house strategize the show? How did you come up with the concept?

We are committed to serving original content to our audiences and we were thinking of what we could do to live to that promise in the current scenario as shoot sand production had stopped due to the pandemic. Given right kind of a story which could be shot in a contained environment, we knew that it would be very difficult to shoot, but not impossible given the way technology has evolved. We lifted off with that thought. We spoke to a few people including SukeshMotwani and we came up with the concept.

The Gone Game is a story that really needed to be told irrespective if it was during lockdown or during normal times. The Gone Game is a phenomenal story that is hyper current and contextual. As they started writing it, it became increasingly interesting and we realised that we could be the first in the world to make a full-blown series with an ensemble cast. It is not a short film that was shot at home, but a full-blown story with a large cast. They say the show must go on and as a result, we now have The Gone Game, all ready to go live on platform. 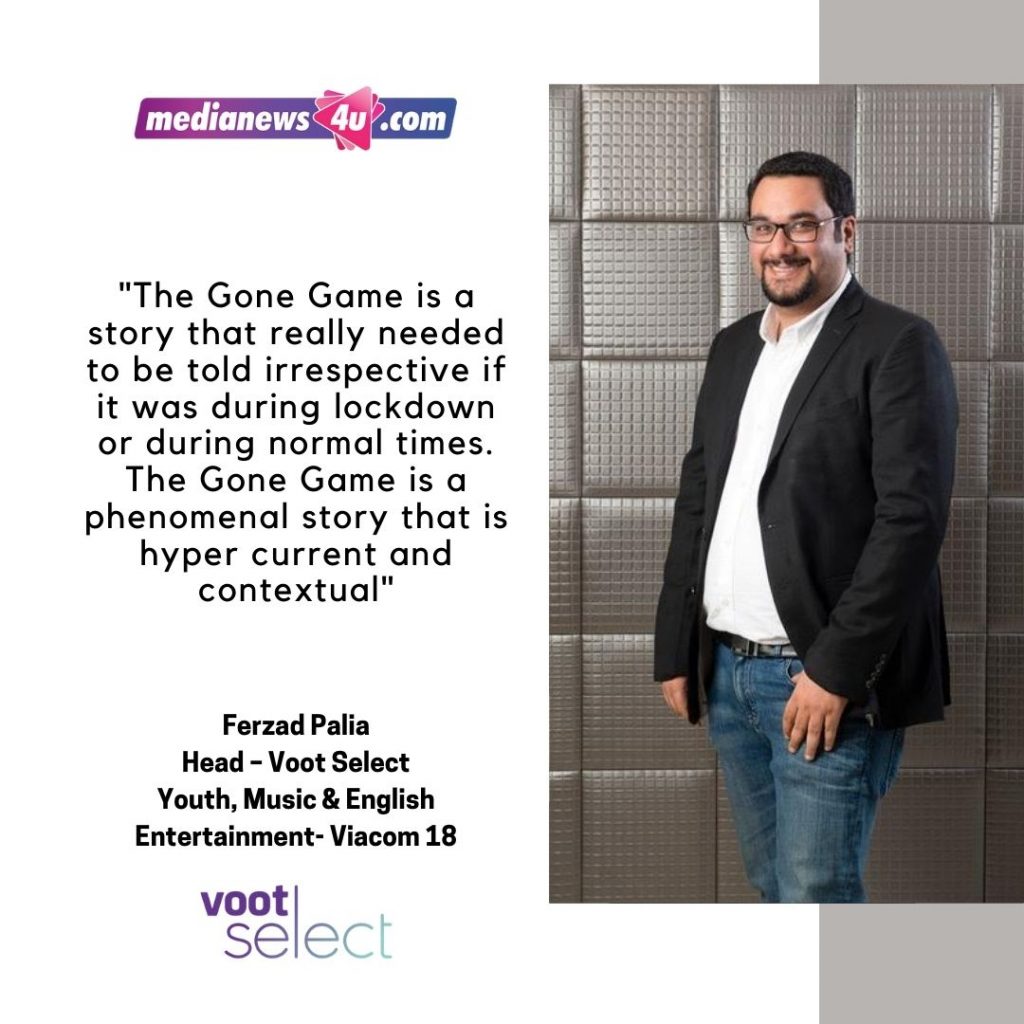 Will you experiment any more considering The Gone Game is a one of its kind show?

Yes, absolutely. We are working on multiple touch points projects. There are a lot of projects in the works because we do realize that this situation is likely to continue for some time. We are opening gradually but it is unlikely to get back to full-scale production, especially where you require a whole different kind of setup. Until then we will continue to look at such stories. We also have some other interesting series in our bank that had been edited during lockdown. So we are looking forward to releasing those too. Meanwhile experimenting is in our DNA and we will definitely continue to  present different kinds of stories provided we think the story is precious to us. 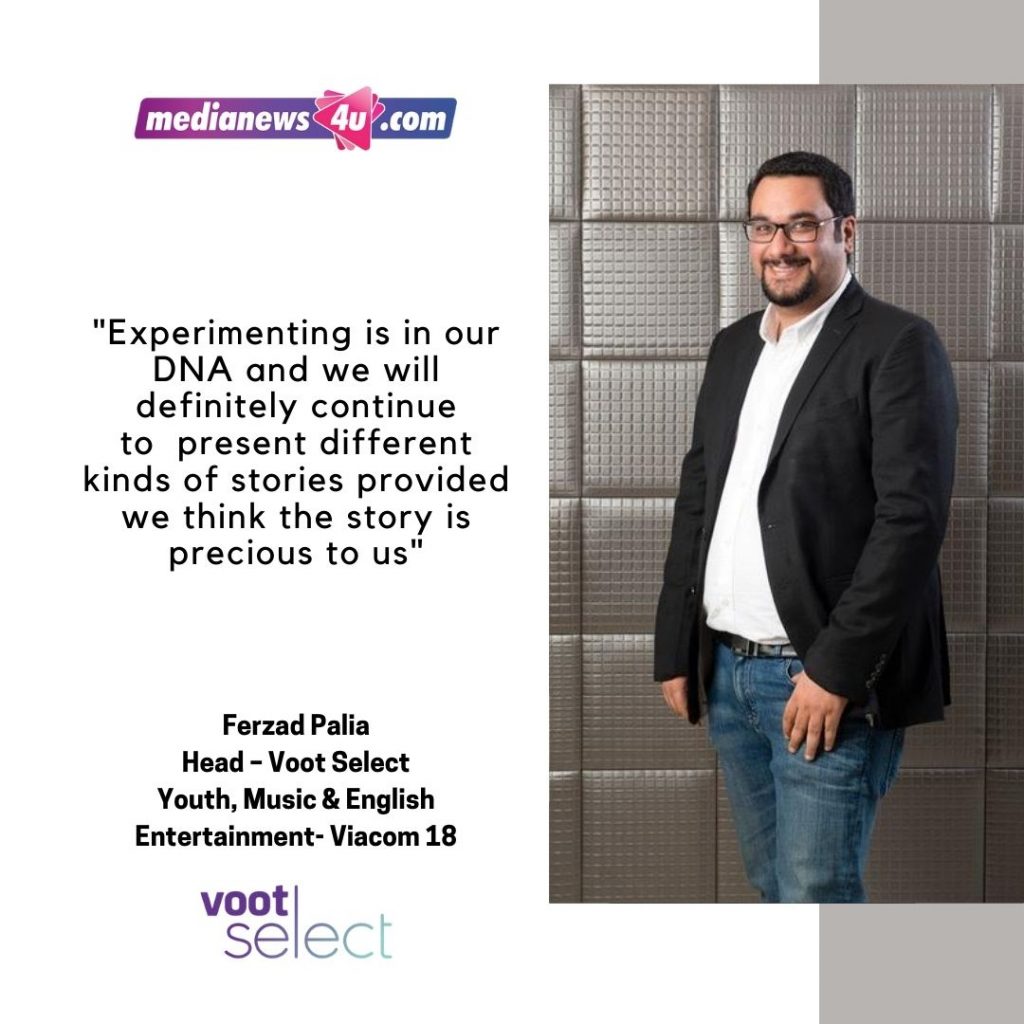 We have about five regional shows that are yet to release over the next few months. We would like to go far more aggressive with regional content but unfortunately, we got caught in the lockdown. We have all our originals now dubbed in Kannada and available on the platform. The results are also very encouraging.

Given that OTT has seen a spike in viewership, what are the viewers actually watching?

There was fresh content on television that had stopped coming in at the start of the lockdown. As a result, consumers were looking for avenues on how to entertain themselves and this was a big catalyst for OTT. We saw a lot of original content getting consumed by people who did not have too much fresh entertainment available that they were used to on a daily basis. There is a habit that people have formed over the years to watch something new every evening. You would be surprised at how consumers are guzzling content. While normally it would take an average of three or four sessions spread over three or four days to finish seeing a show, people are now finishing these within a day. So, the pressure is higher to deliver good content.

Is VOOT Select also considering film launches on its platform?

We have not gone that route so far as yet. But it is something we will look at later. I think being at such an early stage, we are more focused on driving home our own shows which has seen a lot of success at this juncture. We were very fortunate to have an extensive content bank with our own shows that we had worked on over the last few months. We are focusing all of our energies and resources on building our own shows. We also have a very strong international catalogue that we are focused on. But like I said, we are very new and there are a lot of options on the table. 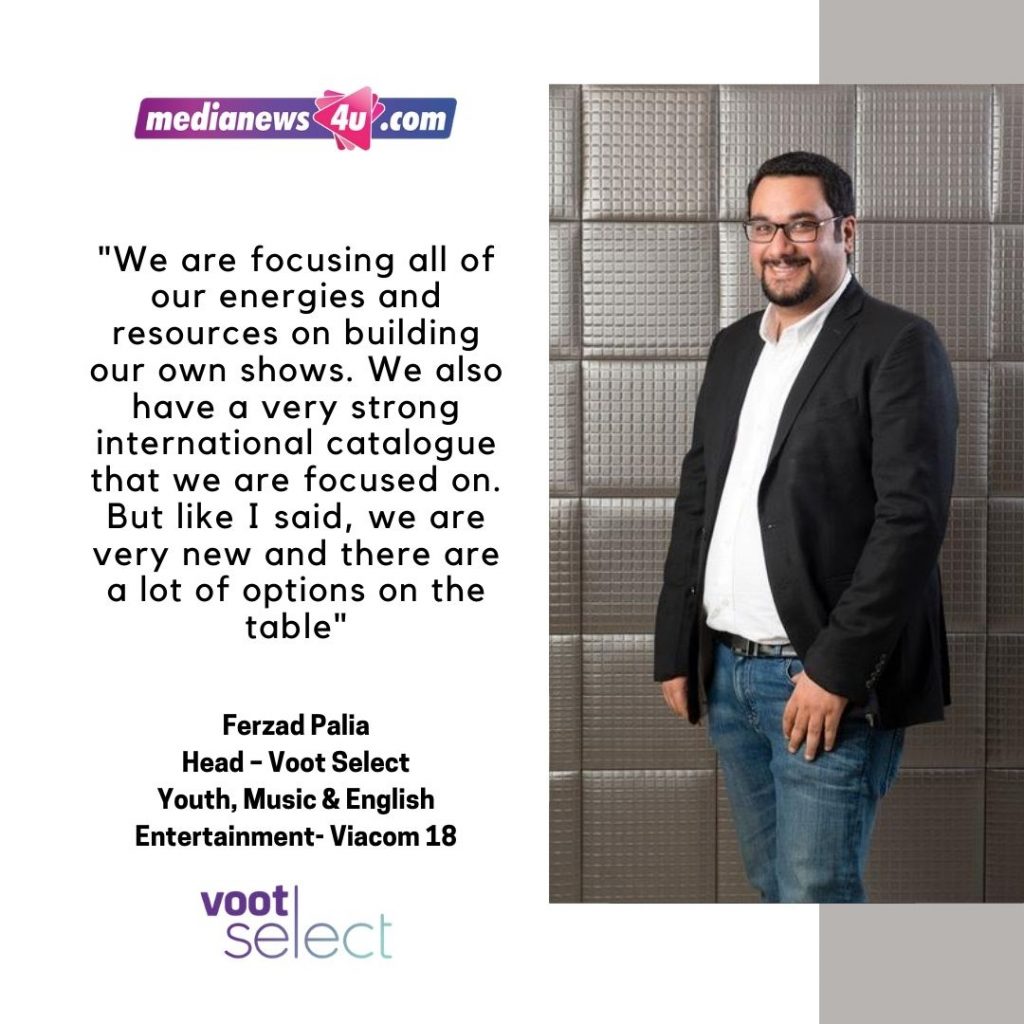 New Delhi: Today, Adidas introduces the evolution of its long-standing brand attitude Impossible Is Nothing. SEEING POSSIBILITIES - as told...