We always focus on giving bigger stage to thoughts and voices of the common man: Purushottam Vaishnava, ZEE Hindustan

Zee Hindustan is a 24×7 national Hindi news channel. The channel was launched in May 2017, with the motto – ‘States Make The Nation and ‘Nayi Bharat ka Naya News Channel’ – promising to highlight the voice of a common man from Kashmir to Kanyakumari. The channel was refurbished in 2020 with Shamsher Singh joining as the Managing Editor, tweaking the narrative to a more nationalist approach. The channel has a young team of anchors and reporters with youth at the centre who fearlessly ask the pertinent questions. The tagline- ’Humara Samwad, Rastravaad’ is at the core of all content, with innovative formats for news presentation; with anchors going beyond the newsroom to where the real action is on-ground.

In an exclusive chat with MediaNews4U Purushottam Vaishnava, CEO, ZEE Hindustan speaks to us on the programming during the 2022 UP elections, marketing initiatives, and various other strategies…

Elections in this country are a festival of democracy, the 2022 elections in UP are on a huge scale, how is ZEE Hindustan visualizing this scenario?

Uttar Pradesh is a very important state not only for all Hindi News channels but for the overall electoral process. It is a significant state politically as it captures 80 parliamentary seats. Therefore, it is very important for us to get to the roots of the state and capture the pulse of the people. ZEE Hindustan’s positioning of ‘Humara Samwad, Rashtravad’ is essentially to get the narrative of the people who make our country. We believe in covering things from the ground up to get the right views on the news. For the UP election too, we have a huge team of 90 reporters and anchors already placed in various parts of Uttar Pradesh. We have dedicated 1 reporter for each of the seats and anchors to stitch the whole narrative. We already have a whole line-up of programs on-air showing our viewers how the election warfare in Uttar Pradesh is shaping up. We have seven special bulletins dedicated to Uttar Pradesh in the day. The plan is exhaustive coverage in the most engaging manner, so the viewers don’t feel encumbered to watch our channel rather feel like all their queries are answered. Programs like UP @ 403 – a bulletin dedicated to each of the 403 constituencies in Uttar Pradesh following them as they gear up for election. The day starts with the first bulletin called UP se Ram Ram, where 4 anchors situated in 4 different areas of UP will present 1 comprehensive bulletin. A mix and match with programs on a lighter note like Chai, ChaatChaupal, Chanuvwalinao where we will showcase the food, flavor and the beauty of UP along with election perception is also part of the daily line-up.

Will the programming involve on-ground activities, live debates involving the common man other than politicians and their spokespersons?

Our programming has always been focused on giving the bigger stage to the common people; be it in our events or shows. The voices of the people, the districts at the grass-root level are intricate in our approach to news. We already have a big LED canter and a branded bus going around 40 districts of Uttar Pradesh doing early prime-time bulletins with the local leaders & Influencers in the Shankhnad program. We also have an audience-led bulletin where the common people will voice their concerns in their districts. We are also tweaking our application, so people can submit the issues in their areas and suggest remedial measures if any. The channel is for the common man, so we make sure we include the thoughts and voices of the common man in the bulletin. Our district event, Hindustan Ki Baat is a series focusing on various districts and upholding the achievements of that district.

What would be the innovative marketing initiatives to garner eyeballs for the programming?

The best way to connect with people is on the ground. As mentioned, we have been on the ground for around 15days already with the branded LED canter, from where we are doing shows as well as promoting our programming line-up. Apart from this we have our trade campaign going on to keep the trade fraternity abreast of our initiatives.

Strategy to stay ahead of the competition?

ZEE Hindustan is a new channel, with young voices and a fresh approach. Youth is the core of our Nation; hence we have infused them into our journalism. On-ground reporting is our key approach towards getting our viewers all that they want to know about what is happening on the ground. That is our winning formula which will keep the viewers engaged on the channel.

Today with new players in the market especially Hindi, how is the advertising pie looking?

Yes, there are new players in the market. It indicates there is potential in the market to support so many channels. As for us, ZEE has heritage value; our focus is not on having to vie for mind space. The trade fraternity is aware of our reach and potential. As long as we keep generating good content to keep viewers engaged and create innovative solutions for the clients, we should always be able to get a sizable section of the pie. 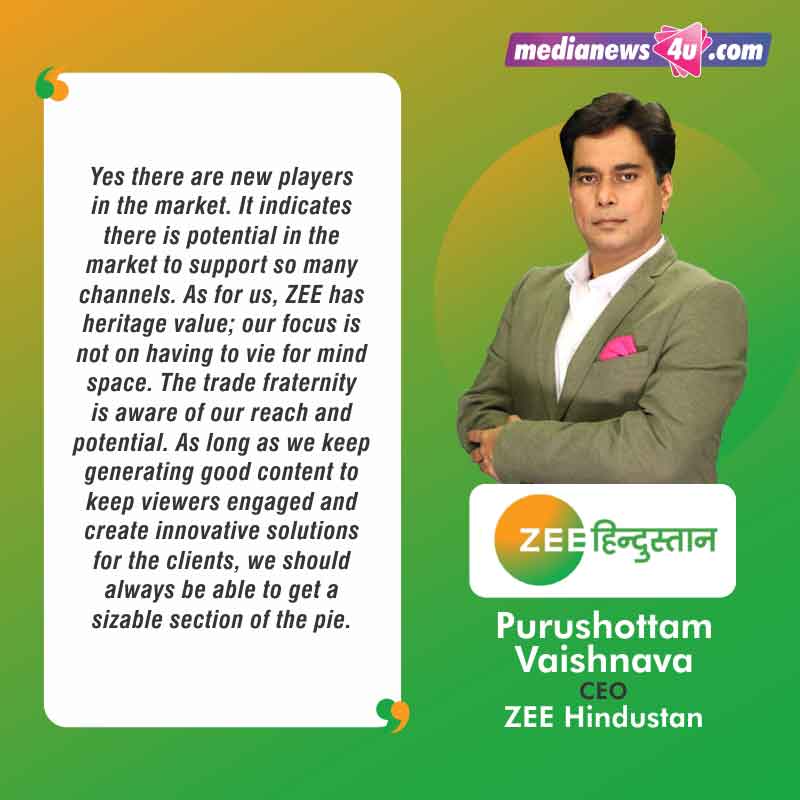 What would be the other initiatives by the channel during this period?

ZEE Hindustan’s bouquet of programs has always been varied. Events are something that we are big on. Apart from district events, we have successfully executed several big Intellectual Property events such as Udaan, an entrepreneurship series, Aarogyam- a conclave on Ayurveda. Similarly, we have a plan for big-ticket events in the last quarter of this fiscal year. Viewers are always looking for new content. It’s our constant endeavor into keeping our audiences engaged on our channel since the competition is so high.

Kolkata: As the days are spinning with anonymity and state restrictions are being operational, owing to the omicron variant pandemic...