We are very confident in terms of revenue we will generate this year from BIGG BOSS: Mahesh Shetty – Viacom18

Colors big ticket reality show Bigg Boss premiers on 3rd October 2020. Bigg Boss is the most awaited show and the viewers are in for a treat with an entertaining ride packed with drama, thrill, and excitement. The upcoming season of Bigg Boss will enthrall the audience with high-voltage drama and action.

Mahesh Shetty, Head, Network Sales, Viacom18 talks to us on the tie-up with Mobile Premier League and the advertisers interest in the big ticket property Bigg Boss even in this time of pandemic.

Bigg Boss the show and the association with Mobile Premier League?

Bigg Boss is the biggest show on television, IPL is the closest though it is bigger but when it comes to GEC television BIGG BOSS is the undisputed leader. For a brand like Mobile Premier League (MPL) first and foremost, the association will increase the brand awareness as Bigg Boss has a strong viewership, last year we had 213mn viewers, and in terms of ratings, Bigg Boss was the highest-rated show. Also the kind of reach Bigg Boss will give MPL is unprecedented.

The other thing is that Bigg Boss has very strong fan following and this will get transferred to the brand. From a brand awareness point of view it will help MPL and this will lead to brand downloads, engagements.

As a broadcaster it is two pronged, MPL is a new category for us as compared to the traditional brands we have been associated with earlier. Today more and more consumers are spending time on Online gaming activity and MPL has its own share of loyal followers and it attributes to this association. 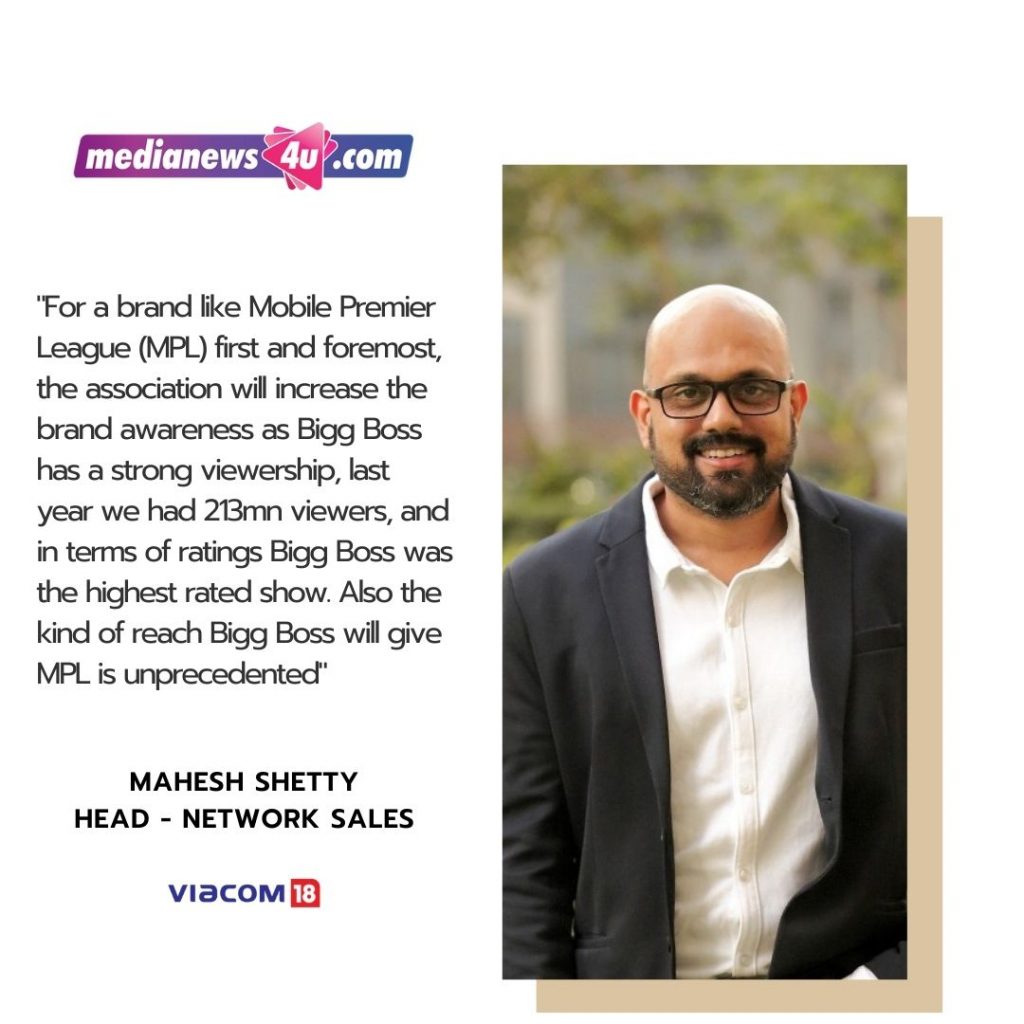 What are your expectations this year amid this crisis?

Last year in terms of viewership it was the best we ever had, though No 13 is considered unlucky by many but it was very lucky for us. The best ever BIGG BOSS season for us both on Broadcast and VOOT.

The expectation and target we have set for us this year is to surpass last year’s numbers and a couple of things gives us a confidence, one is the entire fan following we got last year was huge and they are eagerly waiting for this season to start. The country has been under lockdown for the past 6 months and television viewing and consumption overall has seen a huge surge and we feel this will also impact rating. The theme and content this year is very interesting and we are confident that we will see an increase in viewership as compared to the last year.

This is from a viewership viewpoint and from the advertising standpoint the interest is phenomenal, especially coming in the midst of Covid, and as the country is slowly coming out of lockdown the response from advertisers has been very good.  We are very confident in terms of revenue we will generate this year from BIGG BOSS. COVID and then the lock down also an economic slowdown, how has advertising response been particularly for Big Boss because as it is a big ticket property and who are the other sponsors?

The timing of the boss is very critical to the success of Bigg Boss and from a commercial standpoint also. The show goes on air 3rd October, it is exactly six weeks before Diwali. It is starting at the best time from a commercial standpoint, from an overall ADEX advertising spend it is a sweet spot I would say. India is also coming out of a lockdown and brands are also wanting to go out and advertise. From that point of view, the timing is matching with what brands are wanting to do. There are not too many platforms now or property like Big Boss out there, that has really helped us get very good traction from brands. 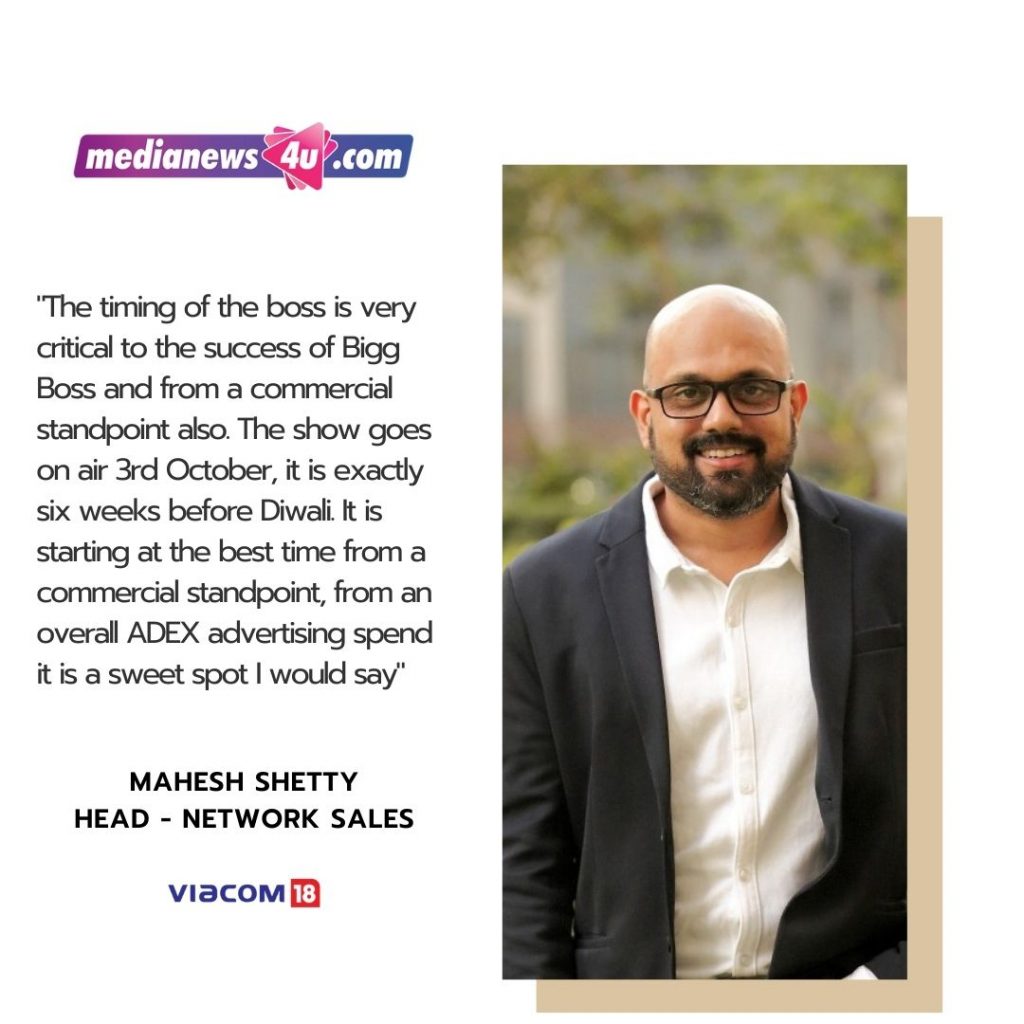 The VIVO exit was last minute, it was not something that was planned, the brand was very happy with the association and we had a good run last year. Getting Mobile Premiere League as the Presenting sponsor in very quick time is an indication of the popularity of Bigg Boss, Powered by Dabur Dant Rakshak Ayurvedic Paste and HUL.  We have about a month to go, our discussions with the advertisers are active and we are confident that other brands will come in.

The history of Bigg Boss over the years has been that most brands come and are associated with the property year on year. This is because of the delivery that Bigg Boss gives and the kind of brand engagement that a property like Big Boss is able to deliver. It is not just about sales and it is not about bulk buying for the entire season but it is also about wonderful brand engagement that we are able to give to all the brand partners who come on board. The overall response has been very good, yes, we are coming out of lockdown, despite COVID the responses from advertisers has been very good. 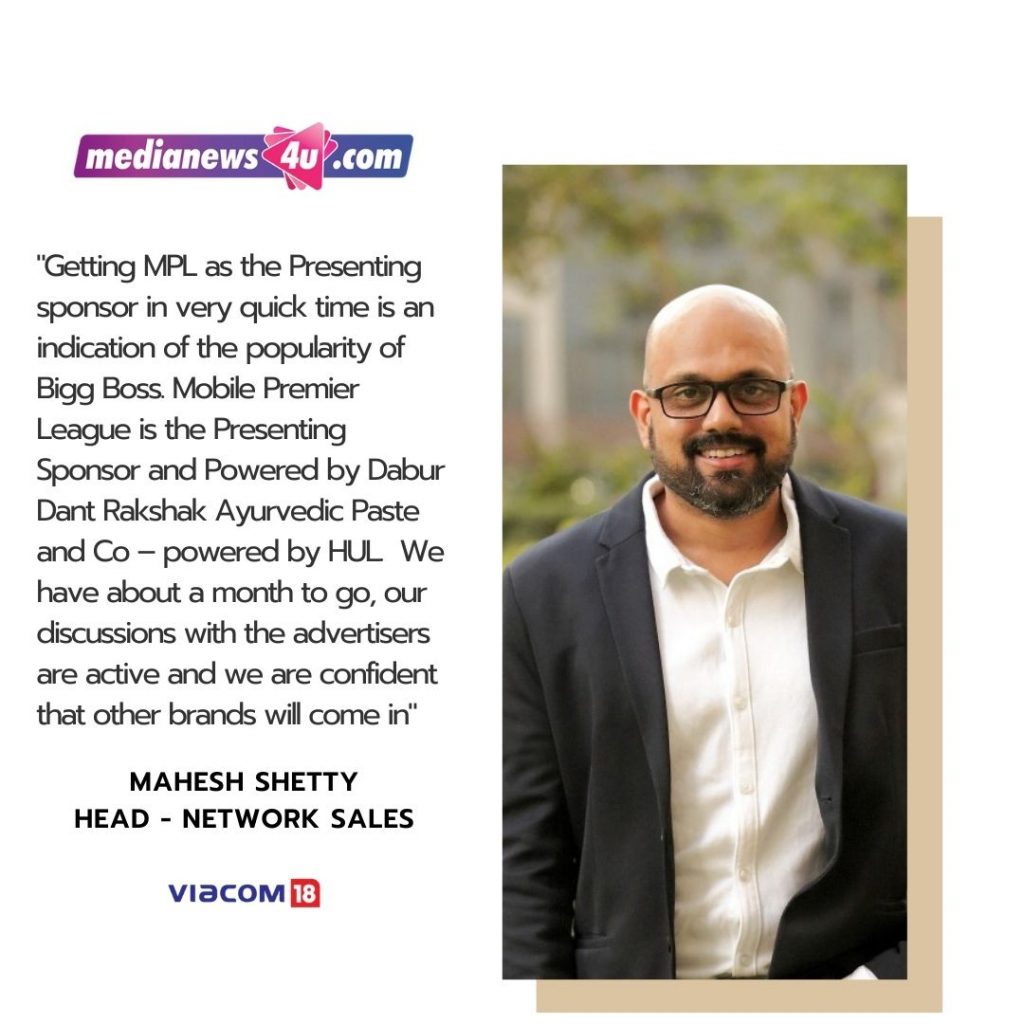 Bigg Boss launches on October 3, IPL will be peaking at that time. Your thoughts?

I just want to clarify, this is a question that comes to me that Bigg Boss is clashing with IPL but Bigg Boss comes at this time every year, IPL does not. This year is an exception thanks to the pandemic. The other thing is that actually, the clash between IPL and Bigg Boss is only for eight days and let me tell you how. We start on the 3rd of October and IPL starts on 19th of September and it goes on till the 8th of November. The overlap is 37 days versus 160 days of Bigg Boss. Bigg Boss is at 10.30 pm in the night, IPL starts at 7. 30pm in the evening and the match gets over at 10.30 pm.  Actually the match ends and you get into Bigg Boss so there is no direct clash. The Clash is only on Saturday and Sunday where BB starts at 9 pm. It is only in the four weekends there is a clash, eight days in 106 days property is very minimum. 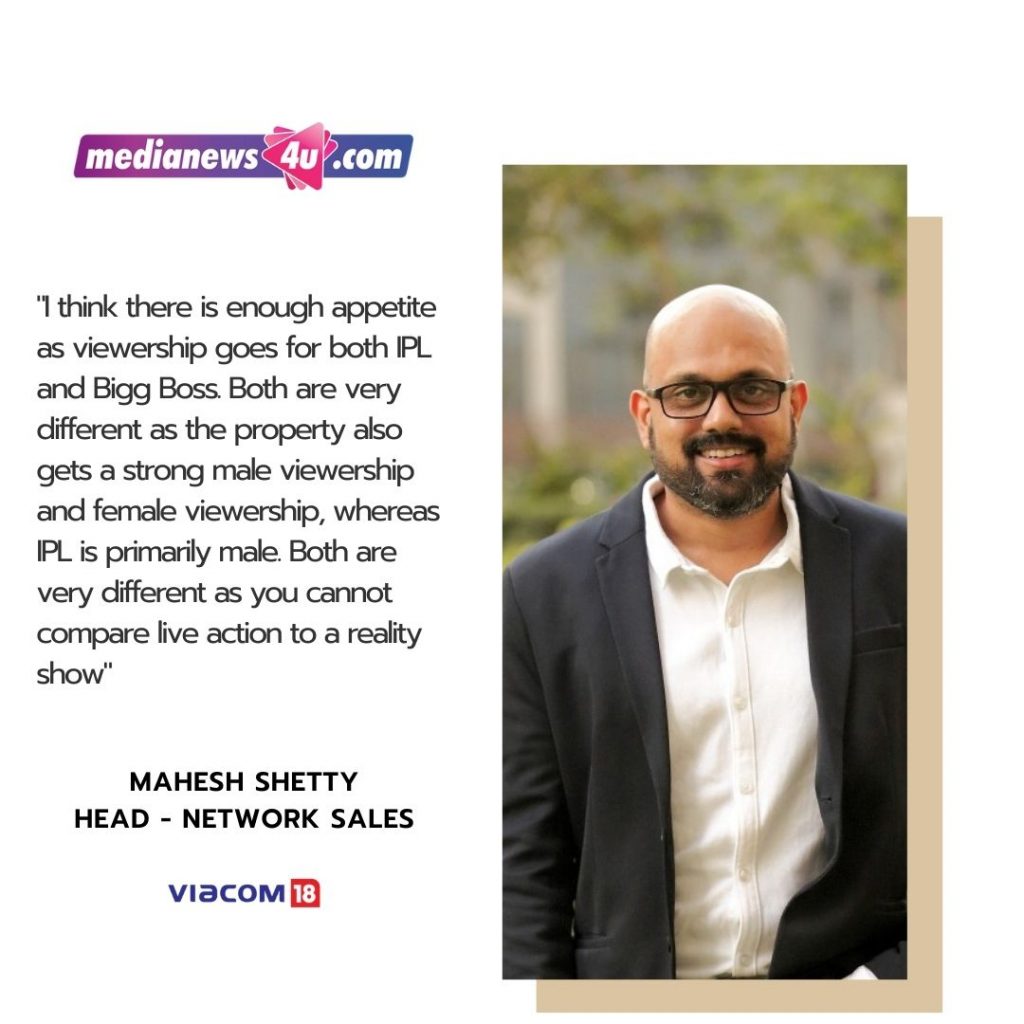 This year Bigg Boss goes on to the VOOT Select platform first. What was the strategy behind this?

This is to give an additional value or I would say a delight to the Voot Select subscriber, and also to increase the subscriber base by giving this as a value add. Bigg Boss has a huge following both on TV and the Voot platform. There are many people who would like to know, slightly before what the world gets to know as to what is going to happen in the episode. That is what the strategy was and also to ensure that Voot Select adds more subscribers by giving that add on. Format of Bigg Boss this year?

The format will be revealed soon, but in terms of glamour, the drama, the masala you get to see inside the house will be there. The celebrity quotient will be high so you just need to wait and watch a little bit for that

We are taking every possible precaution to ensure not only of the people who get into the house, but also the crew. That is something that is being taken care of. On a lighter note, I think it will be the safest place to be because every person who comes into the house will be tested on COVID.

Revenue stream for Bigg Boss, will it be 2 sets of advertisers?

There is additional content that we generate on VOOT that is unique and differentiated and is not on TV. On an OTT platform you can do this and a lot of brands wish to partner this as it increases consumption on the platform and brands are benefited.

Viewership on TV and Voot especially for Big Boss has grown by leaps and bounds from the time it has started streaming on VOOT, what do you attribute this to?

Last year we had a 2X growth in terms of viewership as compared to the previous year. This is because of the strong fan following that Bigg Boss has. We know this is also because if you missed the episode, you want to go out and check it out. The fan following is so crazy that wants to consume, not just what came on television and the VOOT platform is not just about catch up television, but a lot of unique content that gets generated around the contestants. There is a very strong fan following for the people who are in the house or the housemates. Last year the fan following for Siddharth Shukla, Shehnaz, and Aseem was crazy. Any content that gets generated in and around any of these people, the viewers want to consume and that is what makes them gravitate them to VOOT. We expect this to happen this year again. There was 32.4mn minutes of watch time last year on the platform. During this period of COVID, we have seen a spike on OTT viewing, do you expect this watch time to go up by 2X?

We expect the watch time to go up substantially, I would love it to go up by 2X. Bigg Boss is the biggest draw, the OTT platforms across has seen a spike during this time and we definitely expect that to happen during Bigg Boss.