Zee Thirai will be among the top Movie Channel Brands in 52 weeks: Siju Prabhakaran in Leaderspeak

In part two of Leaderspeak with Siju Prabhakaran, EVP and Cluster Head, South Business – ZEEL he talks about the movies business in the South states, pressures faced by the broadcast business because of digital film premieres and much more.

What’s the strategy behind 52 Premieres in 52 Weeks? What are your expectations from it and where would you like to see the channel at the end of the 52nd week?

From a product offering perspective, we wanted to give something different to our viewers. Otherwise, the brand promise is just a promise. As a brand, it is important to live up to it as a product offering. There are a lot of great films. We have curated these films by picking and choosing over a period of time and they have not had satellite premieres in the past. These films are very high on its content value which is sure to be a huge draw for our audiences.

We have branded it “Theri Fridays” and we will be airing the 52 premieres over 52 weeks, it will be telecasted at 7 pm.

In the afternoons, we are introducing a slot called “Naduvil Konjam Breaka Kanom” which is a break-less film segment; it is built on the insight that people want to watch films without any breaks and it’s something that we want to provide as a brand.

In the mornings, our brand slotting is called “Filter Kaviyam”, where we will have classics from the 80s. Sundays will have blockbuster films. These are some of the product offerings which will be there other than the regular FPC.

In a year’s time, I would definitely want to be a very strong brand that captures the mind space of the mainstream movie watching audience in Tamil Nadu and a very strong advertising platform for our advertisers.

Definitely being a strong contender among the top brands in the market is the vision.

TV is consumed by larger audiences, digital is a growing medium and is growing at a good pace. So, there is no conflict in terms of digital eating into TV or vice versa. But yes, digital acquisition for content is a very aggressive space and ZEE5 is one of the top players.

In all, other players are also looking at digital acquisition of films and that is something which is the new reality.

Did the aggressive digital acquisition practices of the industry have any impact on the satellite value rights of movies?

Yes, the acquisition prices have gone up across markets.

But this is a psyche I think, digital players have just entered the market; like in any industry, there will be best practices in pricing which will be there and it’s purely a demand and supply game, but it will get rationalized soon.

How was the response for Zee Cine Awards Tamil in terms of viewership and revenues?

Zee Cine awards is a property that is very popular in the Hindi markets. We are extending that popularity in regional markets now. The first edition of Zee Cine Awards Tamil was a great success. We had a tremendous industry response. The show was very well appreciated by all the industry colleagues. Everyone loved the way we conducted the awards, the sheer entertainment value we provided and our advertisers were really excited about the event. We had a brand like Skoda to promote their cars on-ground. Star attendance was pretty good. We did a lot of surround marketing around the awards right from our launch press meet to some differentiated ideas like a sand art in Besant Nagar Beach by Padma Shri Sudharshan Pattnaik to celebrate Kollywood.

We had outside stars attending such as Sudeep from Kannada market, Nivin Pauley from Kerala, and a special message from Chiranjeevi to greet the audience. We had big stars from Kollywood like Rajini sir, Kamal sir, Dhanush, Nayathara, A R Rahman etc among many others. This is going to be an annual affair from this year.

It was on the stage of Zee Cine Awards that Kamal sir unveiled the Zee Thirai brand and we were very thrilled about that.

Many leading stars gave us a lot of positive wishes for the fact that a new channel is coming. Our promise of being committed to good content is something we want to live by as a brand going forward.

All in all, using Zee Cine Awards as a platform to launch Zee Thirai is something which just happened. We did not strategically plan this but it seamlessly fell in place. 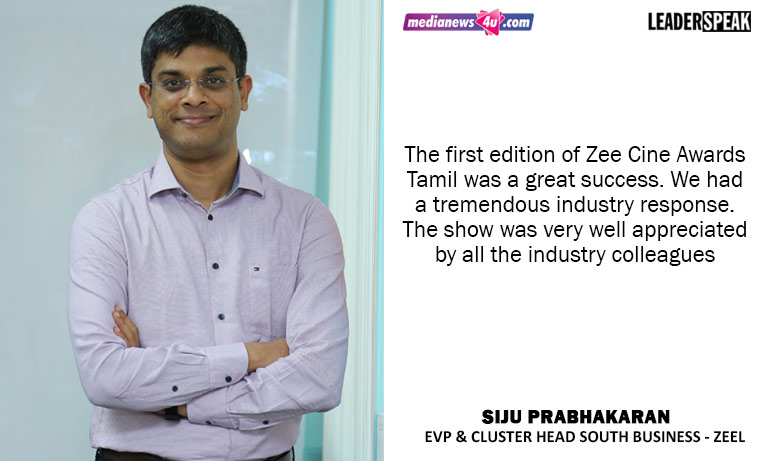 What are your thoughts of getting into movie production for the South market?

Zee is into movie production in the Hindi markets, we do have few films releasing every year. We are also pretty strong in Marath and are one of the largest producers in the Marathi film industry.

South is something which is always there on the table in terms of getting into movie production. As of now there is no decision on the same.

I think when we enter into film productions, we should bring some value more than just money. There should be some expertise and something that we as a company bring in as a USP. I think, once we have that conviction, maybe we will create films in this market. 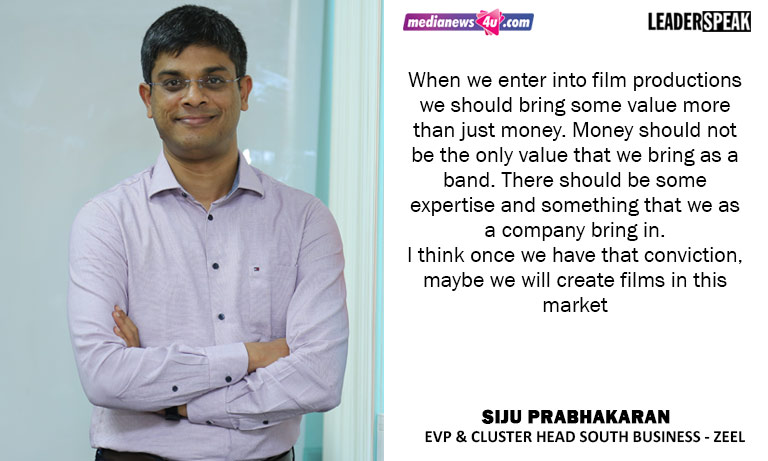 Do you see a synergy between the measurement systems of OTT and Television especially to measure cross-viewership going forward?

I think that is for the industry to decide.

Bringing synergy in a measurement system which will be uniform is something where every medium is looked for what it brings as a value and not comparing it with the other medium. Print has a different value, which irreplaceable by TV, and TV has a value which is irreplaceable by digital and digital has a different value altogether. Every medium caters to a certain set of audiences, but I believe that media agencies would be the better players to answer that question. We are here to capture audiences across mediums and ensure that they are an engaged set of audiences with a minimum threshold of viewership.

Despite Zee Tamil facing placement issues with some of the MSOs in TN, the impact on the viewership was not proportionate. Was it due to the uptick in a-la-cart subscription?

The viewer has the power to select the channel of his choice. As we see, an uptick is happening. We see activations happening for the masses and we are also actively communicating to our viewers and to the LCO community. We create great content for the pricing of the channel.

The viewer is a very informed person and he knows what is right and what is wrong for him. Viewers will not take a channel if it is not serving their entertainment need. The fact is – that despite whatever has happened today, the channel has gotten off to a good reach. It has not come back completely and it still has some distance to travel. But we are on a very positive track. This is what we mean when we say -consumer is the king.

Week on week, the reach of Zee Tamil has been going up. It resulted in strength of our core shows increasing, which is a first indicator. As the cycle goes from one month to other, the audience will migrate in phased manner. We have crossed the critical mass and there is a strong up take of the channel and that speaks volumes of the brand pull Zee Tamil enjoys with the consumers.