According to the Axis My India December CSI Survey, 27 pc will watch the tournament on Mobile, while 12 pc view it on OTT.

by Editorial
in Featured, Market Analysis, Television
Reading Time: 4 mins read
A A

Axis My India, a consumer data intelligence company, released its latest findings of the India Consumer Sentiment Index (CSI), a monthly analysis of consumer perception on a wide range of issues. The report for the month of December highlights consumers preferred mode of media consumption for varied needs such as reading, listening to music. While the popular choice for music continues to be YouTube as mentioned by 39 pc, TV is seen as a second favourite reflecting the view of 18 pc followed by radio at 4 pc. The survey further captured interest and enthusiasm around the ongoing FIFA World Cup where in 27 pc will watch them on their Mobile. Interestingly, 35 pc of the people still read Newspapers every day.

The December net CSI score, calculated by percentage increase minus percentage decrease in sentiment, is at +07, from +09 last month reflecting a decrease by 02 points.

The survey was carried out via Computer-Aided Telephonic Interviews with a sample size of 10454 people across 33 states and UTs. 69 pc belonged to rural India, while 31 pc belonged to urban counterparts. In terms of regional spread, 24 pc belong to the Northern parts while 27 pc belong to the Eastern parts of India. Moreover, 29 pc and 20 pc belonged to Western and Southern parts of India respectively. 61 pc of the respondents were male, while 39 pc were female. In terms of the two majority sample groups, 32 pc reflect the age group 36YO to 50YOand 29 pc reflect the age group of 26YO to 35YO.

Commenting on the CSI report, Pradeep Gupta, Chairman & MD, Axis My India, said “Media consumption trends in the country is growing and evolving with the changing times. From newspapers to news apps, nowadays consumers have access to information at a jiffy. While age-old newspapers remains to be a reliable source of information for a section of the population, FM Radio falls below new age platforms such as YouTube in consumers consideration set when it comes to music. TV however continues to dominate the viewership score for big ticket events such as FIFA Football World Cup aiding to the big screen experience of consumers. Consumers’ favouritism towards celebrities across profession and states from Mr Bachchan, Virat Kohli, PV Sindhu to Allu Arjun reflect on how media consumption has broken barriers in terms of entertainment consumption. This again ties back to the growing digitalisation and availability of varied modes of media consumption.” 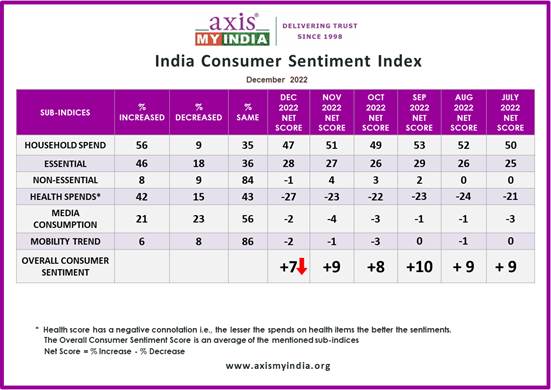