A Growth Hack in simple terms is growth experiments which have worked and helped a company grow and reach the end goal: Vaibhav Sisinty, Growth Hacker

At 27 years of age, VaibhavSisinty has already cemented his position as one of the top growth hackers in the start-up ecosystem of India. Vaibhav realized his passion for marketing at the young age of 8 years when he started selling Beyblades to school kids at a 200% margin. This passion for growth marketing grew multifold and that led Vaibhav to launch his first-ever digital marketing setup in 2013 – CrazyHeads, at the age of 19, while he was in his second year of engineering.

Currently, Vaibhav has launched three courses on Growth Hacking – LinkedIn, FB Chatbots, and Instagram (Visit sisinty.com to check them out). He has also worked with over 60 startups globally- Paytm, FarEye, OpenPizza, and many more helping them with their growth and customer acquisition strategy. He has delivered over 100 workshops on Growth Marketing Hacks for leading corporates and top tier colleges in India

In an exclusive conversation with Medianews4u Vaibhav Sisinty, Growth Hacker speaks about his journey as a Growth Hacker and now in the process of setting up his own setup.

You have had a very interesting life. Can you share it with us?

I am Vaibhav, a Growth Hacker by profession and an entrepreneur by heart.

My journey began when I was in college. I started something called Discovering Android which grew to more than 1 million visits in a year’s time. But in 2012, I started “Crazy Heads”, an award-winning agency, serving 100+ clients across the globe in just 3 years in my college days, with 14 other crazy heads.

But in 2015, I decided to join Uber to help them scale from 100 trips to 1M trips every week and became the Marketing Manager at Uber at the age of 23. I later joined Klook India as Head of Marketing and helped them clock $27M/year business.

In the last 7 years, I have consulted 60+ start-ups, delivered 40+ workshops and 20 talks in top institutions on growth. I have already launched 3 Growth Hacking Courses (LinkedIn, Chatbots&Instagram).Now I am working on a start-up that is currently in stealth mode which I will be launching in a couple of months!

What does a Growth Hack mean and what are the challenges you have faced now during these difficult times?

A Growth Hack in simple terms is a growth experiment that has worked and helped a company grow and reach the end goal. Normally a successful growth experiment should match four criteria. It should be fast, cheap, repeatable, and scalable. If you figure out a way to complete a task in 10 minutes which usually takes 2 hours and it is cheap, repeatable, and scalable, then you can call it a growth hack. In the same way, if one of your experiments is successful but it is not scalable and costs a lot of money then it cannot be termed as a growth hack.

One of the biggest challenges in these difficult times has been:

Honestly, these times have been more of an advantage for me than a disadvantage in the business point of view. With the pandemic and strict lockdowns, tons of people came online. The influx of people into social media was massive and the average time a user spends online went up as well. Even the most traditional businesses that only had offline presence came online, which personally was great for my consulting business and my personal brand as a whole. 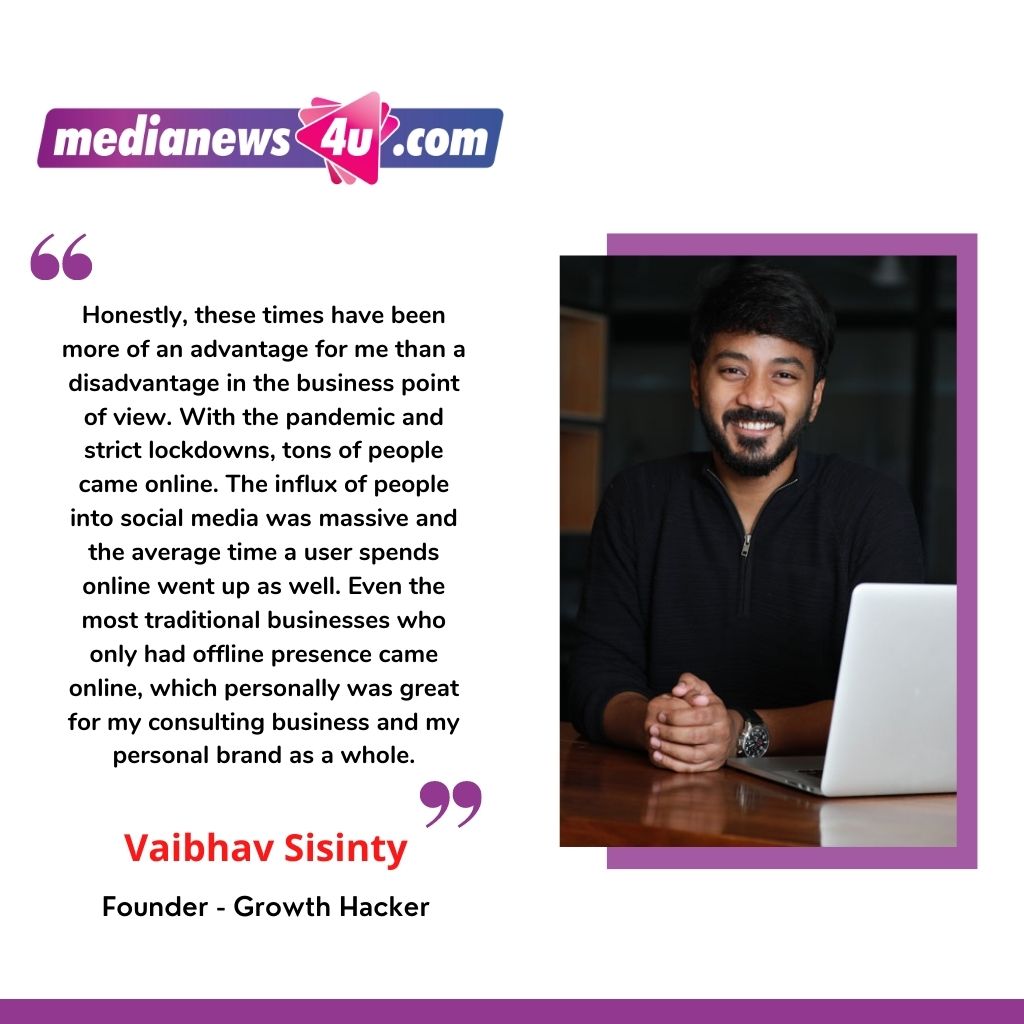 If I had to point out one challenge, then it was the ads costs going up, because more people started utilizing the power of media buying to grow their business but again, it compensated because there were a lot more eyeballs to show ads now!

Social Media is now huge, but marketing here can be tough, it can either make or break a brand, how does one tackle this especially the traditional brands?

Social Media initially can get overwhelming with the abundance of platforms available for advertising, especially for traditional brands and people who have mostly done offline advertising. The platforms have changed, but the fundamentals of marketing still stay the same.

Rather than running a newspaper ad that might cost you 50k bucks, you can run Facebook ads and get targeted traffic to your website. You can create original content and build an organic following which you can leverage to build your email list, which later can be monetized for your business.

While the competition is high it’s a massive opportunity and traditional brands should start leveraging it as soon as possible. To keep things simple they can start with running Facebook ads and create content on only one social media platform where their audience is the most active. Later they can build an Omni-channel approach by running Google Ads, being active on 2-3 social media platforms, or even start their podcast. Today brands wanting to target their TG are innovating the way they market their brand, how effective is this and does this also rule out wasteful expenditure?

You have to innovate and experiment with how you market on social media. There is no other way out. I have experimented with more than 300 creatives and 40 video ads for my products. While a lot of them have failed, some of them just went viral. Now, it was my job to make sure I double down on them and scale them and I did that. So, to reach the desired state, you have to experiment like a mad man till you get there.

Your interaction on Linkedin, can you take us through it?

Being an early adopter of LinkedIn helped me understand the platform better and faster than most people. In the last couple of years, I have built a strong community of over 2,80,000 people just through the power of content creation. My personal brand has also helped me connect with the top 1% from various sectors easily. In the process, I have also helped more than 35,000 people kick start their journey on LinkedIn and make the most out of the platform, through my LinkedIn 5 Day Workshop. 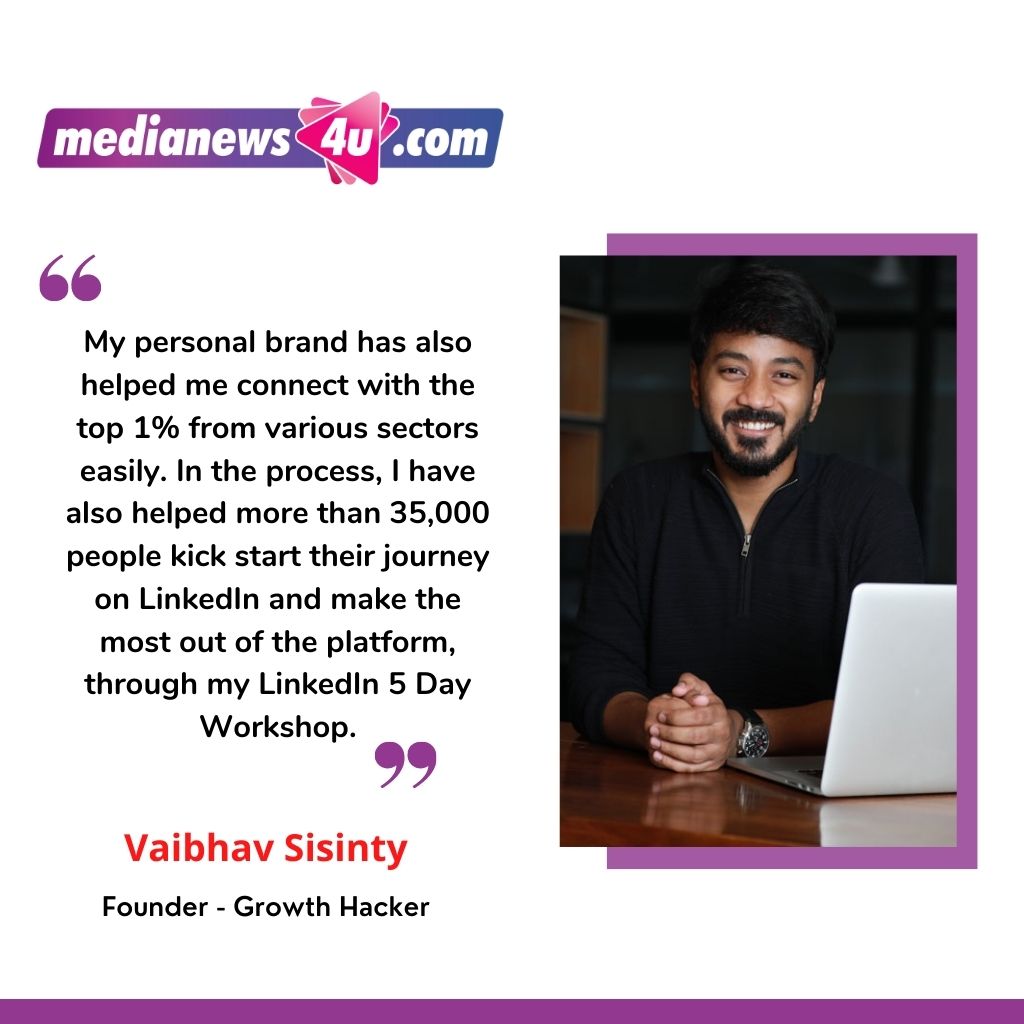