Advertising spend by Big Tech reached $46.6bn in 2021, accounting for 6.0% of all ad investment globally

Mumbai: A new WARC analysis of advertising investment by eight major digital platforms has underlined the importance of ‘Big Tech’ to the health of the global ad economy. These findings are published today by WARC, the international marketing intelligence service, as part of its WARC Media suite. 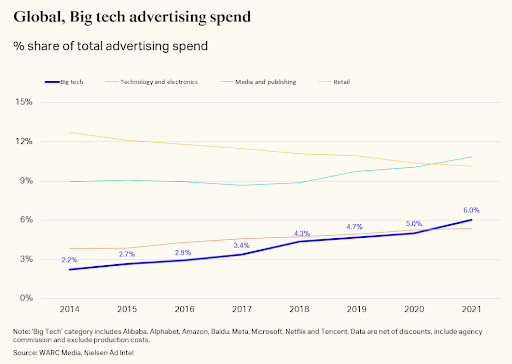 In 2009, Amazon founder Jeff Bezos infamously asserted that “advertising is the price you pay for having an unremarkable product or service.” Fast-forward to 2021 and Amazon invested $16.9bn in ads (+55.0% year-on-year), the most ever spent by a single company within a 12-month period.

However, Amazon’s expenditure model appears to be self-funding: investment in advertising helps Amazon to draw shoppers to its e-commerce platform, which in turn increases the revenue it gains from retail media ads – as well as ad spend on products like Twitch and Freevee. 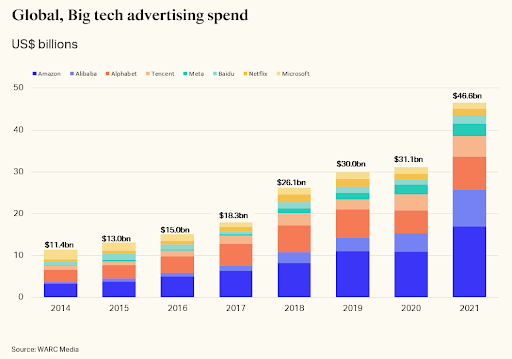 Among the companies analysed by WARC, Microsoft shows the lowest commitment to advertising. It invested $1.5bn in 2021, a sum that has remained stable since 2016. However, this may change in light of the prospective acquisition of gaming company Activision Blizzard and Microsoft’s growing ambitions in the metaverse space.

While Big Tech companies are investing vast sums on advertising in absolute terms, these platforms are also growing revenues at a remarkable rate.

In many cases, Big Tech brands are investing a lower percentage of total sales in advertising. These businesses do not feel bound by rules to maintain levels of ad spend relative to total sales, as one might find in categories such as CPG or automotive. 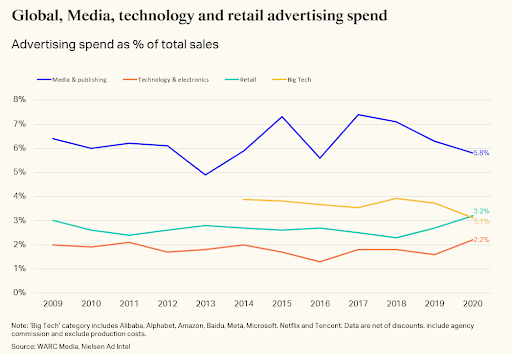 The notable exception is Facebook-owner Meta, which has accelerated its ad investment. Meta’s ad spend as a percentage of sales has grown from a mere 0.8% in 2017 to 2.5% in 2021.

Alex Brownsell, Head of Content, WARC Media, and author of the report, says: “Big Tech businesses have come a long way from being ad investment sceptics, to ranking among the biggest-spending advertisers in the world. As their dominance of the mobile-first digital commerce marketplace increases, so too their share of total global ad spend is likely to grow.

“It underscores that, while digitally-native brands can succeed in the short-term without the support of ad spend, longterm success often depends upon a willingness to invest in performance-enhancing and brand-building advertising.”