Chennai: Zee Hindustan, part of Essel Group, is a 24×7 National Hindi News channel. In December 2018, the channel relaunched itself as the first news channel in the country without any Anchor or Newsreader. The idea behind the strategy of going anchor-less is aimed at giving news without any views.

After establishing itself in Hindi News market, Zee Group planned to expand the Zee Hindustan franchise to South Regional markets like Tamil and Telugu. Subsequently, ZEE Hindustan is gearing up for launch in Tamil Nadu market shortly.

Targeting three of the very well known lead Anchors in Tamil News genre the campaign aims to highlight the fact that Zee Hindustan Tamil will be an anchorless channel.

Pointing Gunasekaran, the Chief Editor of News18 Tamil Nadu and his signature show at primetime – “Kaalathin Kural” (Voice of Time) – the ad says the Kural (Voice) has become timid.

A very innovative way to launch a totally North based channel in a market which has a plethora of news channels and the first channel which is anchorless. The never before thought process of pulling in top newsmen in TN has grabbed the attention of the audience and industry observers.

The campaign has been conceptualised & designed by LIQVD ASIA. Last January the agency did a similar campaign for the national launch of Zee Hindustan (Hindi Channel). 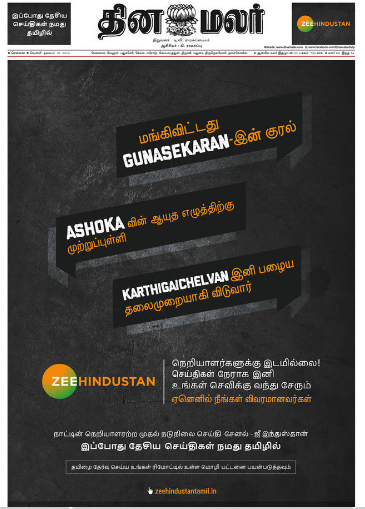 Mumbai: COVID-19 has impacted lives and businesses across the globe. The human society stands at the crossroads of a ‘New Normal’,...

Delhi: Dainik Savera Times was established in August 2011, at a time when no one was bringing the truth to...

In this VUCA World, brands that are adding value and fulfilling customer’s expectations, will bounce back stronger: Ajay Dhayani – Head Marketing of Timex Group

Pride of ownership of a product that’s world-class and a brand that’s truly Indian will play a key role: Kamal Nandi, Godrej Appliances

Will the ban on Tik Tok and other Chinese Apps impact the advertising & marketing industry?

Businesses that cannot transform will perish and others will take their place: Dr. Ranjit Nair – Germin8

As trusted brands, we have to only become stronger and better for our customers, stand by our commitments and adapt quickly: Sonia Notani, IndiaFirst Life Insurance

Mumbai: According to ‘The Indian Telecom Services Performance Indicator Report October – December 2019‘ published by the Telecom Regulatory Authority of India...

Brands bring out their creative side on #SocialMediaDay 2020

Will the ban on Tik Tok and other Chinese Apps impact the advertising & marketing industry?