Mumbai: Ariel, the detergent brand from the house of P&G, has put out an open letter to advertisers, media partners and content creators to deliberately focus on the way women are being portrayed in communication. The brand is calling this an invitation to partner with like-minded brands and organizations that believe in equality and power of representation, to #ShareTheLoad in making the future more equal.

Ariel India has been advocating for gender equality in the division of domestic tasks for seven years now, with the award-winning movement #ShareTheLoad. Their latest edition claunched a few weeks back, has been putting the spotlight on unconscious bias that comes in the way of men taking up joint responsibility of household chores by raising a pertinent question – “If men can share the load equally with other men, why not with their wives?”. With the message that when we see equal, we #ShareTheLoad, the film has already garnered over 85 million views.

To drive the #SeeEqual message even further, Ariel India has published an open letter acknowledging the role of imagery and representation in tackling unconscious bias. The letter talks about the vicious cycle between imagery and society, which continue to imitate each other unless concerted effort is put in to break this cycle. Specifically on the cause of equality within households, the letter highlights that if communication or advertising continues to depict women only and singularly doing household chores, the stereotypes will continue to get perpetuated. Ariel is inviting advertisers, media partners and content creators to join Ariel India in breaking the cycle, by being more deliberate in showing progressive, authentic, and equal imagery that can unwind decades of conditioning and tackle stereotypes.

Sharat Verma, Chief Marketing Officer, P&G India & Vice President, Fabric Care, P&G India said, “With Ariel #ShareTheLoad, we have been sparking conversations and advocating for equality in the division of household chores for the last 7 years. Consciously or unconsciously, we are influenced by what we see and hear. Therefore, imagery and communication have the power to change the world. Stereotypical imagery can feed and reinforce our unconscious bias and substantially slow down the pace of change. While many of us are we doing our bit to bring out more gender-neutral imagery in our advertising, this open letter is intended to spark conversations on the issue and invite all like-minded brands and organizations to collaborate, and to accelerate the pace at which we are moving towards an equal tomorrow. Because we know that when we #SeeEqual, we #ShareTheload.” 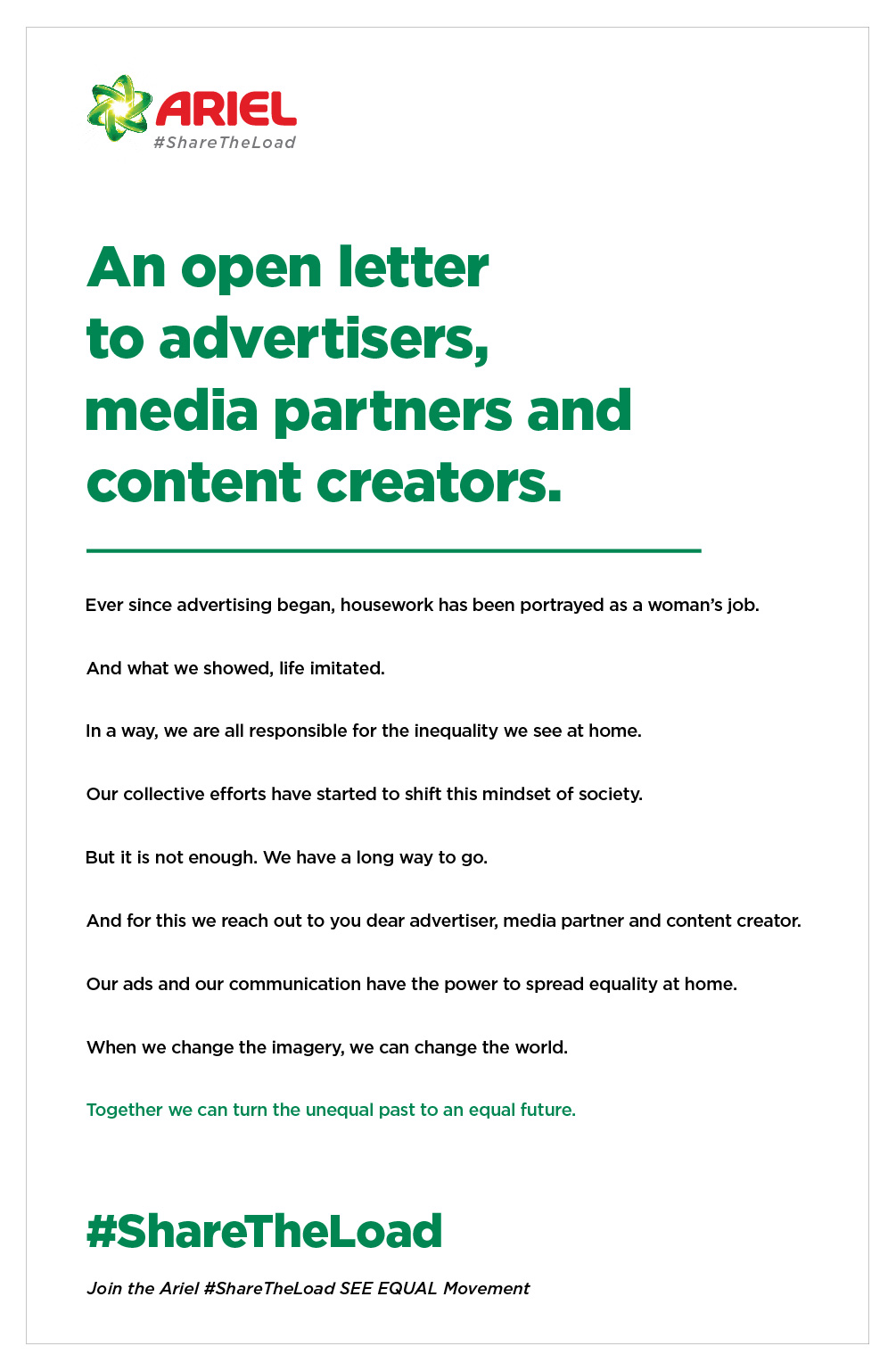 Recently, towards the same objective of bringing in more real and progressive depiction of women in communication, Ariel launched #ShareTheLoad NFTs in partnership with upcoming female NFT artists. These digital collectibles are interpretations of the core idea of #SeeEqual and #ShareTheLoad and can be won by consumers as part of an upcoming contest. Ariel India and Disney+ Hotstar also came together to curate a list of inspiring films and shows that underline the message of #SeeEqual and put a spotlight on the necessity of men seeing women with an equal lens – whether at home or outside of it. This list of content brings about narratives, characters and situations that represent women in a more accurate manner, breaking stereotypes and taking charge. Joining hands with reputed educational institute MICA, Ahmedabad, Ariel has also engaged in discussions with future generations of marketers and advertisers to sensitize them on ‘How to #SeeEqual’ in advertising.

Over the years, the brand had also witnessed social change, with consistent drop in the percentage of men who believe household chores like laundry to be a woman’s job. Therefore, the brand has consistently raised pertinent questions to enable conversations that can drive cultural change. For the first edition of the #ShareTheLoad campaign in 2015, Ariel raised a very relevant question – ‘Is laundry only a woman’s job?’. With the 2016 ‘Dads #ShareTheLoad’ movement, the conversation was aimed at highlighting the prejudice that passes down from one generation to the next. In 2019, with ‘Sons ShareTheLoad’, the brand urged sons to #ShareTheLoad at home with the core question – Are we teaching our sons what we are teaching our daughters? Share The Load for Equal Sleep in the year 2020 was all about impact and action. It highlighted the impact of the unequal division of chores on their wife’s well-being and leveraged it with men to drive an urgency to act. The latest film Ariel #ShareTheLoad See Equal is about seeing the spouse equally because when you See Equal, You Share Equal.

Mumbai: All India Institute of Ayurveda (AIIA), an autonomous body under the Ministry of Ayush (MoA), Government of India, has...