by Kalpana Ravi
in Exclusive, Featured
Reading Time: 5 mins read
A A

In today’s times where Social Media rules several advertisements have faced controversy with various individuals or groups objecting to them. Given the sensitivity of our times, the advertising industry has had its work sharply cut out. The Advertising Standards Council of India (ASCI) has been receiving hundreds of complaints every year against advertisements that people in India find offensive.

In an exclusive chat with Medianews4u Manisha Kapoor, Secretary-General, ASCI speaks to us on the need for the report, how the six trigger points were identified, and much more…

What as per ASCI is termed as offensive?

Several advertisements have found themselves in the midst of a controversy in recent times with various individuals or groups objecting to them. These are sensitive times and the advertising industry has its work cut out, like the ‘What India Takes Offence To’ report points out.

As far as the ASCI code is concerned, it is clear that advertisements must keep in mind prevalent social and cultural norms and must not be derogatory of gender, or promote violence or intolerance. The code says that advertisements should not contain anything indecent or repulsive that is likely to cause grave and widespread offense, given generally prevailing standards of public decency and propriety. 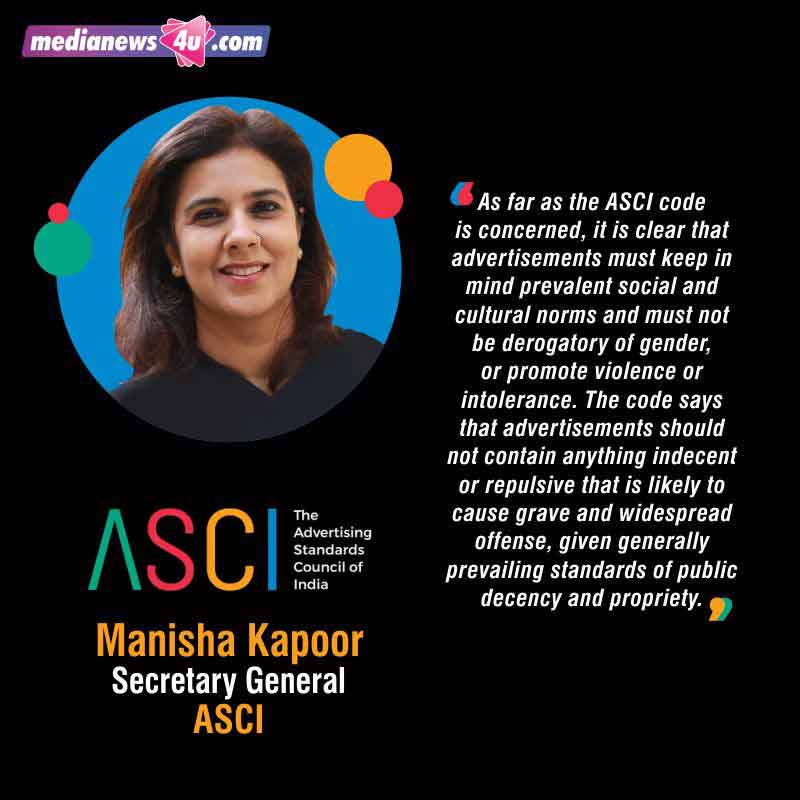 As far as the complaints we receive go, while there are several advertisements that people deem offensive, not all of them violate the ASCI code.

Today we are seeing more and more brands take this route of being controversial, they get called out on social media, is this one way for brands to garner eyeballs?

There is a growing trend of advertisements and brands getting trolled on social media when an individual or group takes offense to a particular message or depiction. Indeed, some advertisements may be deliberately meant to provoke or create controversy in order to get noticed. Any violation of the ASCI code is unacceptable and will get called out – by consumers and by our suomotu tracking of ads.

With attention-commanding such a premium these days, some brands feel that controversy is the best of gaining mindshare. However, such efforts don’t work in the long term and usually land up damaging the brand.

Diverging slightly to inadvertent controversies, some brands use ‘social issues’ in very shallow ways – with negligible understanding or investment in the actual cause. In such cases, too, they run the risk of being called out by citizens who feel that the representations are incorrect or improper. In some cases, it is about depictions and vocabulary that may not be thought through. Most of these cases also are unlikely to violate the ASCI code; however, advertisers may wish to be more sensitized about the issues they pick up. 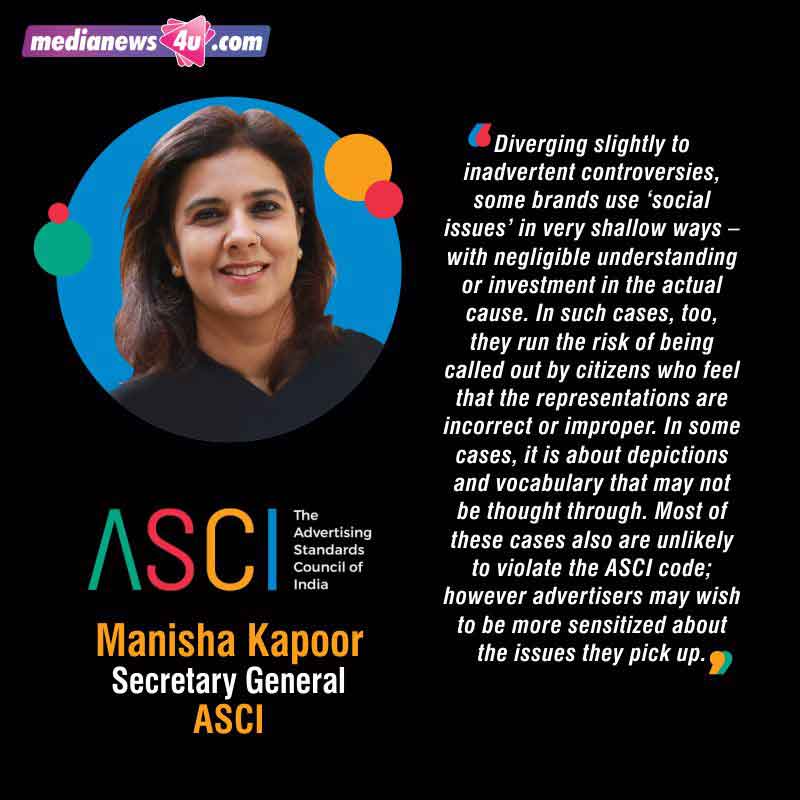 And of course, there are cases where consumers may take personal offense to certain advertisements; however, these are unlikely to offend large masses of consumers in any grave way. Such ads would usually not violate the ASCI code.

It’s not only women but men are also being mocked by some brands, how are you planning to address this issue?

We receive a number of complaints regarding advertisements that mock men, which has been highlighted in the ‘What India Takes Offence To’ report. Here’s the underlying issue: men are torn between their privileged past and a more equitable present in which they are trying to navigate a role. Many feel that, in an effort to balance the scales, they are being depicted as stereotypes or portrayed in a negative light and being unfairly targeted. They, therefore, wish to seek ‘justice’ against ads that appear to demean men by representing them as helpless and voiceless. 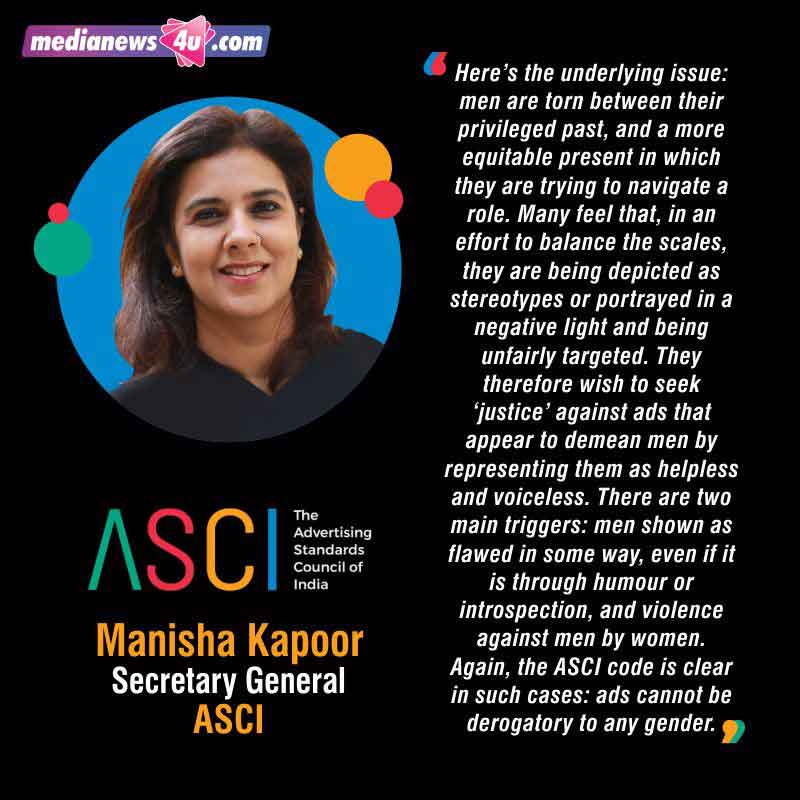 There are two main triggers: men shown as flawed in some way, even if it is through humor or introspection, and violence against men by women.

Again, the ASCI code is clear in such cases: ads cannot be derogatory to any gender.

There is already a process underway to deal with such complaints – once registered, they go to the Consumer Complaints Council that makes a recommendation and informs all parties concerned about the corrective action to be taken. If the council’s decision is not complied with, the matter is escalated to the regulator or ministry concerned.

When it comes to children and the brands associated with them, isn’t there a collective responsibility of the broadcaster on SMP, how does ASCI solve this issue?

ASCI has always had stringent guidelines to ensure that the right advertising is showcased to consumers of all age groups, especially children. The guidelines are comprehensive and encourage communication around things like good dietary practices, selection of healthy options, discouraging excessive consumption/undermining the importance of a healthy lifestyle, etc.

Additionally, Chapter 3 of the ASCI code talks about safeguards against the indiscriminate use of advertising in situations or of the promotion of products regarded as hazardous or harmful to society or to individuals, particularly children.

Clause III.2 requires that advertisements addressed to children not contain anything, whether in illustration or otherwise, which might result in their physical, mental or moral harm or which exploits their vulnerability. Advertisements targeted at children must observe a high standard of social responsibility.

If there is a complaint, there is a process by which the ad is evaluated by the Consumer Complaints Council, which recommends corrective action when needed in the form of withdrawal of the ad or its modification.

Over the years ASCI has helped several brands self-regulate when it comes to advertising to minors and children. Also, under our Advertising Advice service, we point out to advertisers and marketers, at the campaign planning stage itself, if their claims potentially violate any ASCI code or guideline. This will help them take corrective action at the pre-production phase. Another issue that is very on your face is ads that hurt religious sentiments, most times Hindu gods and goddesses are used which have no relevance to the brand, how does one tackle this? 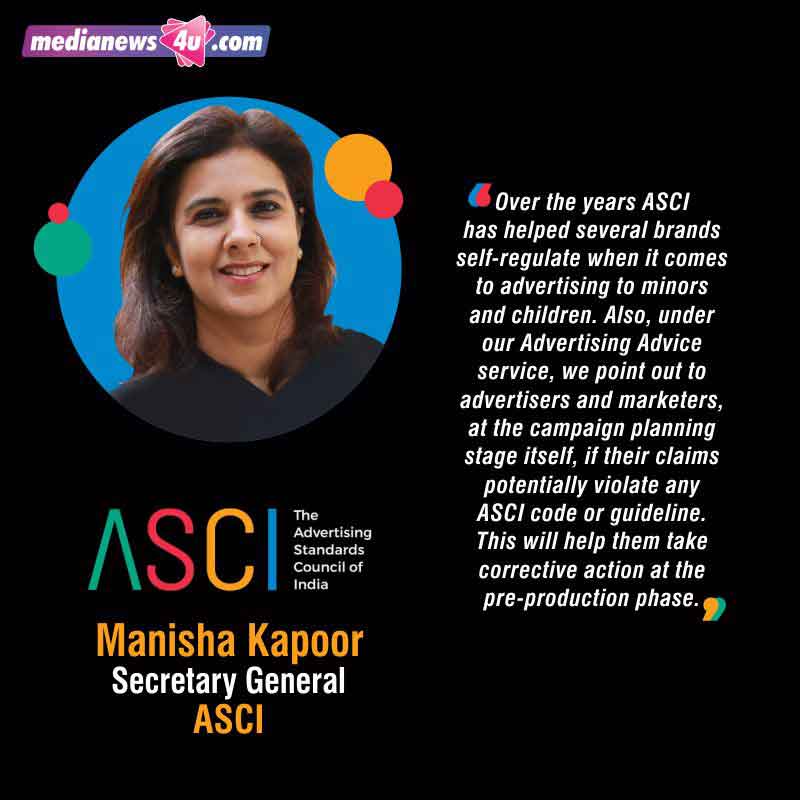 The mere use of religious symbols is not violative of the ASCI code unless these are depicted in a manner that is derogatory or likely to cause grave and widespread offense or harm. All such complaints will go through our regular complaint redressal mechanism.

Would ASCI now introduce a new SOP for both brands and broadcasters?

Our current code and process are quite robust and at this time adequately able to address complaints of this nature. We all want societal changes but at what cost? Have brands now become the torchbearers in depicting only targeting one section of the people? Your thoughts?

While advertising is only one of the factors in the effective progress of society, it must of course play its part. We have not seen sufficient evidence to make this generalisation that only one section is being targeted. We feel this issue can be addressed on a case-by-case basis. Most advertisers are quite cognizant of their responsibilities and would be well sensitized to the cultural environment today. ASCI can support responsible advertising via services such as The Advertising Advice through which possible violations of the ASCI code can be identified at the pre-production stage.

Zlade and Milind Soman initiate conversation on Manscaping in India

Škoda India’s Head of Sales, Ajay Raghuvanshi and Head of Marketing Tarun Jha has moved on from the company, according...