The latest statistics from multiple studies indicate that BBC News outperforming most news brands in India on a number of different metrics.  As per the Reuters Institute Digital News Report 2021, BBC News in India reaches more people weekly: holding the third-highest weekly usage online and it’s in the top five amongst the TV, radio, and print categories.[i]Audiences in India are now turning to trusted brands and BBC News is one of the top four leading news brands.[ii] 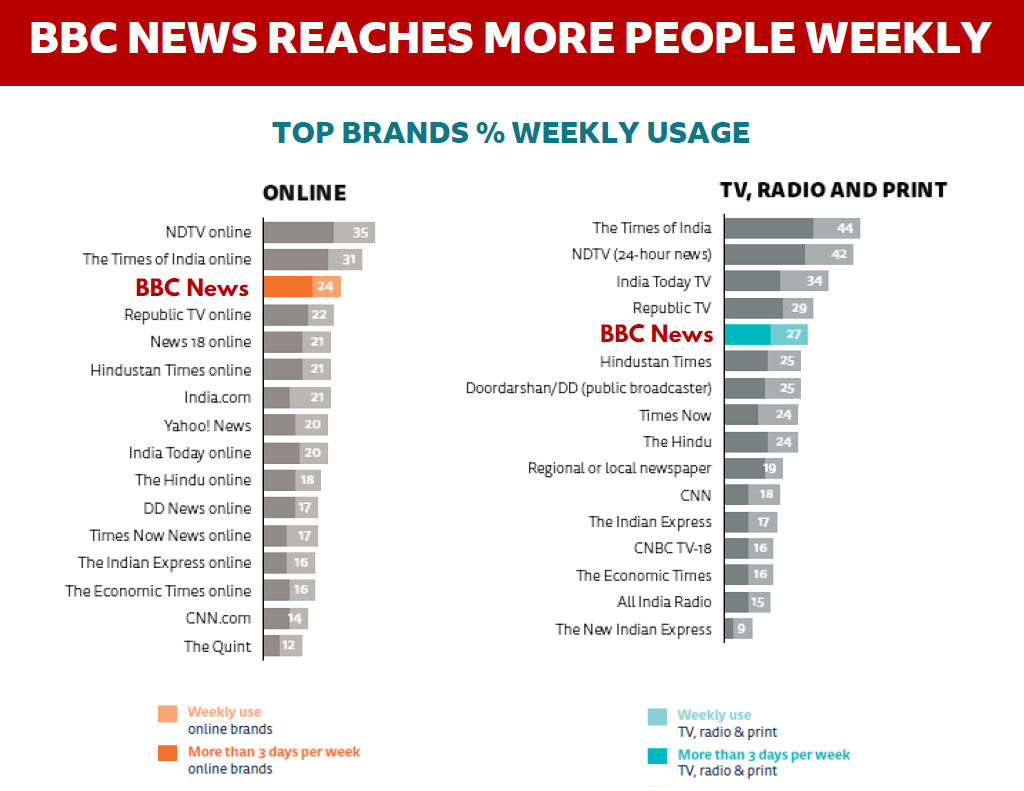 Demand for BBC News’ output from audiences around the world in different segments has hit record highs recently, as readers and viewers seek trustworthy, independent, and objective coverage of world-changing events.

Rahul Sood, Managing Director of BBC Global News India, said: “More audiences are turning to the BBC as they want to rely on the information given by a trustworthy source. The past year has shown how disinformation is spreading online to millions of people. Fake news has a detrimental effect on people’s lives, and it is vital that audiences know they can turn to sources, such as the BBC, for accurate, impartial information.”

Rupa Jha, BBC Head of Indian Languages, said: “The BBC offers a uniquely objective brand of news, which gives audiences the facts so they can make informed decisions about the issues that really matter. The rigorous verification process at the BBC is core to our editorial values and principles of accuracy and impartiality, and every story is authenticated before it’s broadcast.”

Also, independent data from Similarweb has revealed that the BBC once again, the world’s most visited news site amongst traditional news publishers.

Separate research* shows that the BBC is still considered the world’s most trusted and reliable international news broadcaster. [vi]

BBC.comregistered record traffic in May 2021 in India, recording 44 million page views with 32% year over year growth.[vii]

Veteran Journalist Vinod Dua passed away after a prolonged illness following a COVID-19  infection He was a pioneer in Hindi...

New Delhi: India Inc is known for its resilience. The pandemic year has demonstrated the never-say-die attitude of small and...

Veteran Journalist Vinod Dua passed away after a prolonged illness following a COVID-19  infection He was a pioneer in Hindi...