New Delhi: While the world is returning back to normalcy after the pandemic induced lockdown. The Broadcast industry is also showing sign of recovery with its Ad revenues improving in the previous quarter. However, the News Broadcasters are unable to join the recovery phase due to lack of viewership ratings. Particularly the small players such as regional News Channels are the worst affected. Reiterating their grave concern a consortium of 51 News Channels comprising some of the leading National and Regional News Channels has written to Minister for Information & Broadcasting, Prakash Javadekar, seeking his intervention and action so that BARC India resumes publishing the ratings for the News genre without any further delay.

BARC India has ceased to publish the weekly individual ratings for all news channels from October 2020, in what it called was an exercise to improve their statistical robustness and to significantly hamper the potential attempts of infiltrating the panel homes.

The group of News broadcasters in their letter to the govt, highlighted the importance of resumption of the weekly ratings as, they implored the I&B Minister that mass livelihoods were at stake as the ratings dark period is impacting the smaller news channels the most and many were staring at an uncertain future.

The letter blamed a group of channels with deep pockets and heavy capital behind the move to keep ratings in indefinite suspension. “While the suspension of ratings may not have financial bearing on them, it certainly has put an unimaginable amount of stress on our finances,” the letter added.

In addition to the consortium of News Channels, leading News Broadcaster TV9 Network has also reiterated the need for publishing TRP ratings for News Genre on par with GEC citing loss of revenue prospects. It may be noted that TV9 Network has batted for release of TRP ratings despite being a member of NBA that is in favour of BARC India’s decision to withhold the ratings for News genre for some more time.

In his letter addressing to the Information and Broadcasting Minister, Barun Das, the Group CEO of TV9 Network stated “I write to you the reiterate the concerns of hundred of news channels over the unilateral decision of the BARC to suspend rating for an in-determination period. Initially, we suffered the sudden suspension of rating as we were led to believe that it would be only for a period of 2-3 months which in itself was an irrational decision as I have explained below. That declared duration of suspension is long gone but there is no sign or sight of returning to BARC rating for news genre putting the very survival of news channels in jeopardy.”

“As an organization, we at TV9 Network believe that the television rating system is not just a currency used by channels to attract advertising and by advertisers to apportion their marketing budgets. It has ramifications way beyond this narrow business imperative. Rating have Ramification on society as a whole because they reflect what the nation is watching” added Das.

Apart from TV9 Network, the letter from consortium of 51 News channels also appealed for the same saying, “We are a group of 51 news channels, writing to you in great distress and in deep concern. Cumulatively, we reach an audience of about 70 crore people, and given the developments and decisions of the past few months, there is a threat to the livelihood of lakhs of employees cumulatively should the present trajectory to arbitrarily single out and act against the news genre continue. We write to you to reiterate our concerns regarding the Broadcast Audience Research Council (BARC) taking the decision to suspend ratings, for a continual period. Initially, we accommodated the sudden suspension of ratings on being told it would last for a period of 2-3 months— which in itself was a difficult period to get through and caused a huge stress on our finances and operations. However, that declared duration has long been past, and with no sign or sight of the return of broadcast ratings to the news genre, now the very survival of our news channels is at stake.”

“We have been gravely economically impacted by the decision at a time when the financial fallout of the pandemic has already had a grievous impact on us; now livelihoods and our news channels are under existential threat”

“Even as ‘Big’ channels with deep pockets are deploying pressure to keep the ratings suspended indefinitely, smaller news channels across India have their survival at stake”

The Copy of the letter written by Barun Das to MIB follows: 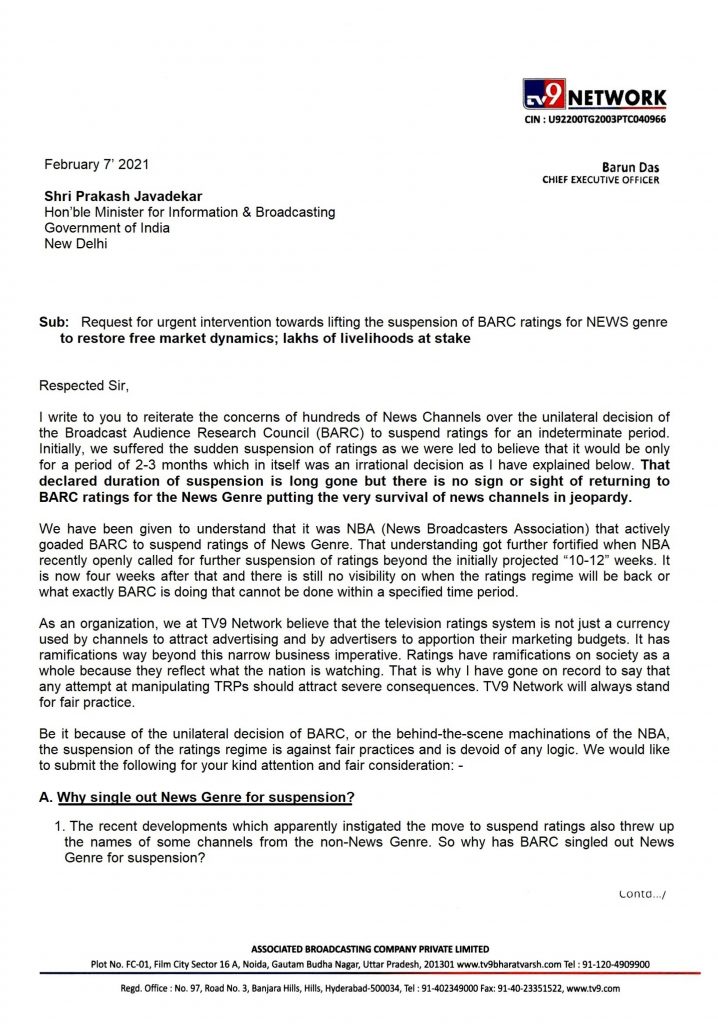 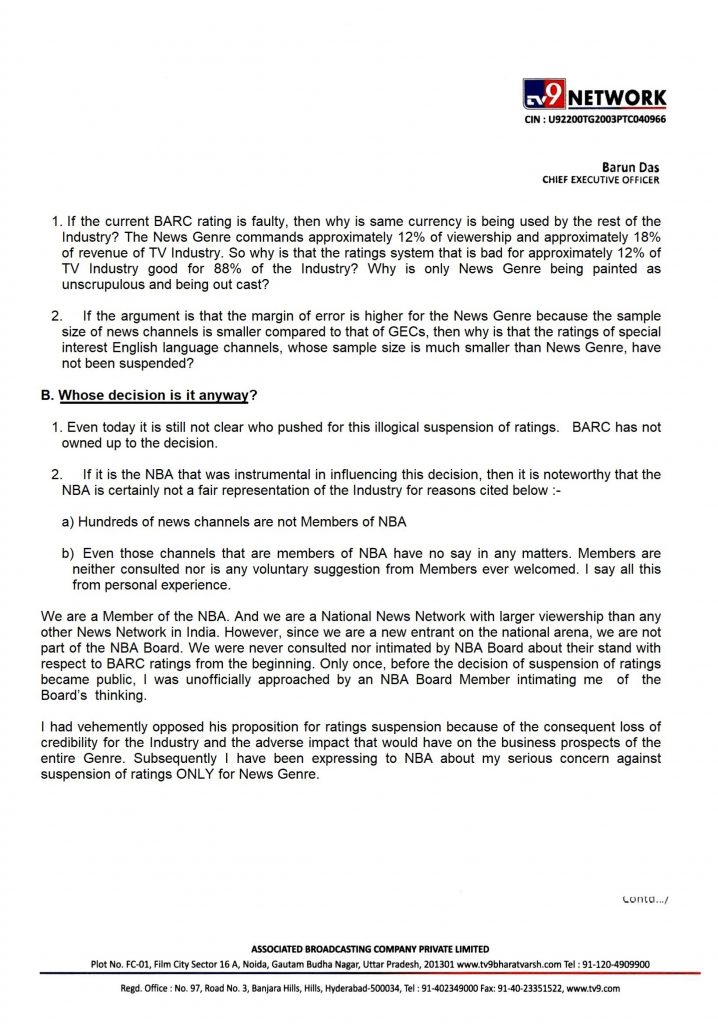 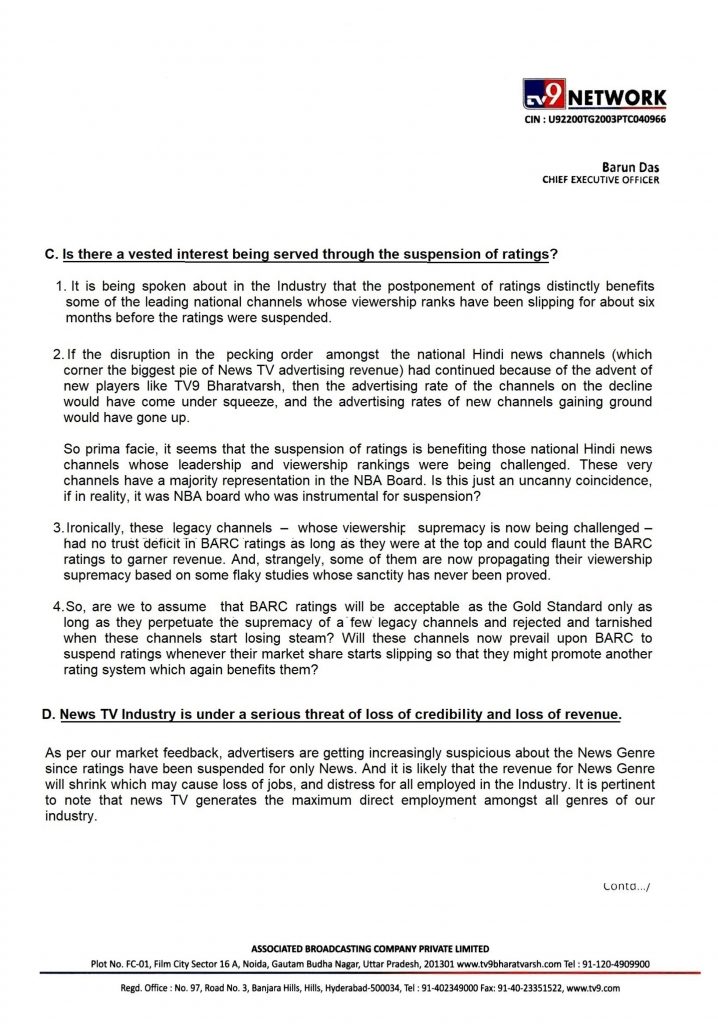 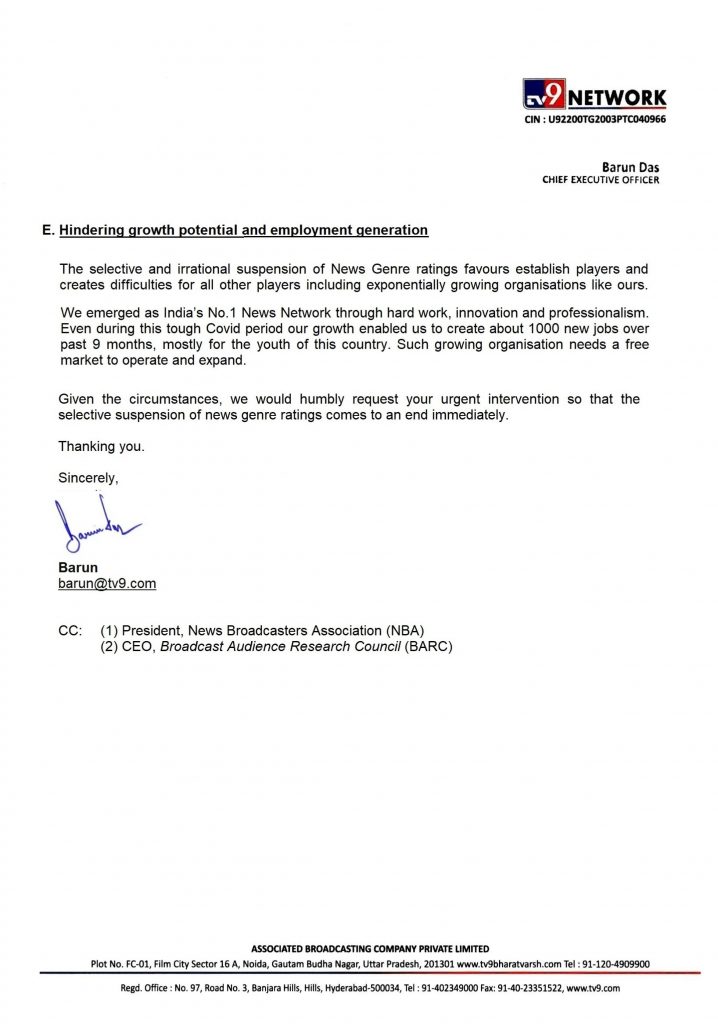