CSK is the driving force behind IPL’s social media popularity, the buzziest team in IPL 2021 with 13.8 million mentions: Wavemaker

Social chatter around the IPL tournament grew by 33% over last year and crossed 80+million mentions this season, according to a social media conversion report tracked by Wavemaker Mesh. In a unique situation this year where the season had to be split into 2 phases, phase 1 which was played in India garnered more mentions (42 million) than phase 2 (38 million) which was played in UAE recently. CSK is the driving force behind IPL’s social media popularity. This is for the 4th time IPL winner CSK was the buzziest team in IPL 2021 with 13.8 million mentions followed by Royal Challengers Bangalore with 9.4 million mentions.  With 5.7 million mentions, Mumbai Indians claimed the third spot. IPL finalist KKR was the 4th buzziest team this IPL.

When it comes to the most viral ads, the Indranagar ka Gunda hun main’ famed ad of Rahul Dravid for Creds was the most viral advertisement this IPL season.  solutions, the ad received a Virality Grade of 8 which is amongst the most viral ads in the ecosystem. After Cred, the ad by Myntra ‘This is how we roar’ featuring MSD, Jadeja, and Bravo was second on the leaderboard with a VG score of 57. In the first phase of IPL, CRED’s ‘Great for the Good ad’ with Rahul Dravid claimed the top spot. Myntra’s ‘This is how we roar’ took the second spot and MX TakaTak’s ad with Virat Kohli was on the third spot in phase 1. In phase 2, the viral ad from Cadbury #GoodLuckGirls took the first spot followed by CSK’s Stronger Together. #Dream11peDimaag- Boss claimed the third spot.  Amongst the top 10 viral ads on IPL in phase 2, 5 ads were by Dream 11. 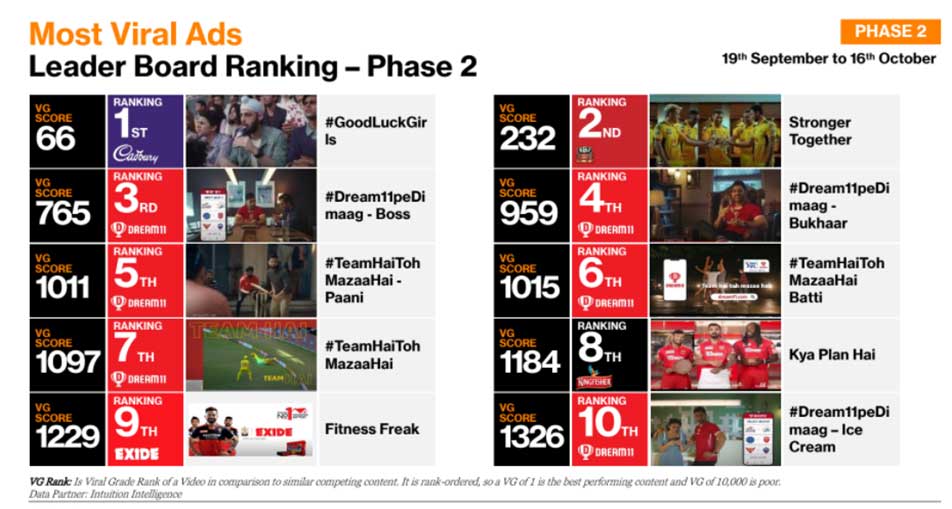 The report also mentioned about ICC World Cup 2021, the world cup which began on October 17th has already garnered 1.2 million social chatters. 48% of WC conversations were

anchored towards India vs Pakistan match played on 24th October 2021. Virat Kohli emerged as the buzziest player in the ICC World cup as well followed by Rohit Sharma and Shardul Thakur.

The study has been done by Wavemaker MESH – the Real-Time Data Intelligence solution that reads real-time environmental signals. This analysis is based on multiple data points collated to create meaningful and actionable Insights. The report has data sources from multiple consumer touchpoints across the Digital ecosystem ranging from Social Listening, Video analytics in partnership with Intuitive Intelligence, Interaction data points collected from Facebook, Twitter, Instagram, and YouTube.