Key insights from the report include:

Global ad fraud rates rose across all formats and environments in H2 2021. Desktop display ad fraud rates were highest in Singapore at 4.1%. The second highest fraud rate was posted by Vietnam (2.6%) with Japan also at 2.6%, and Indonesia at 0.7%. India was the only market in the region that saw ad fraud rates reduce on desktop display to 1.1%. While the worldwide optimised-against-ad-fraud were 1.4%, the non-optimised ad fraud rates could be as high as 10.7%. 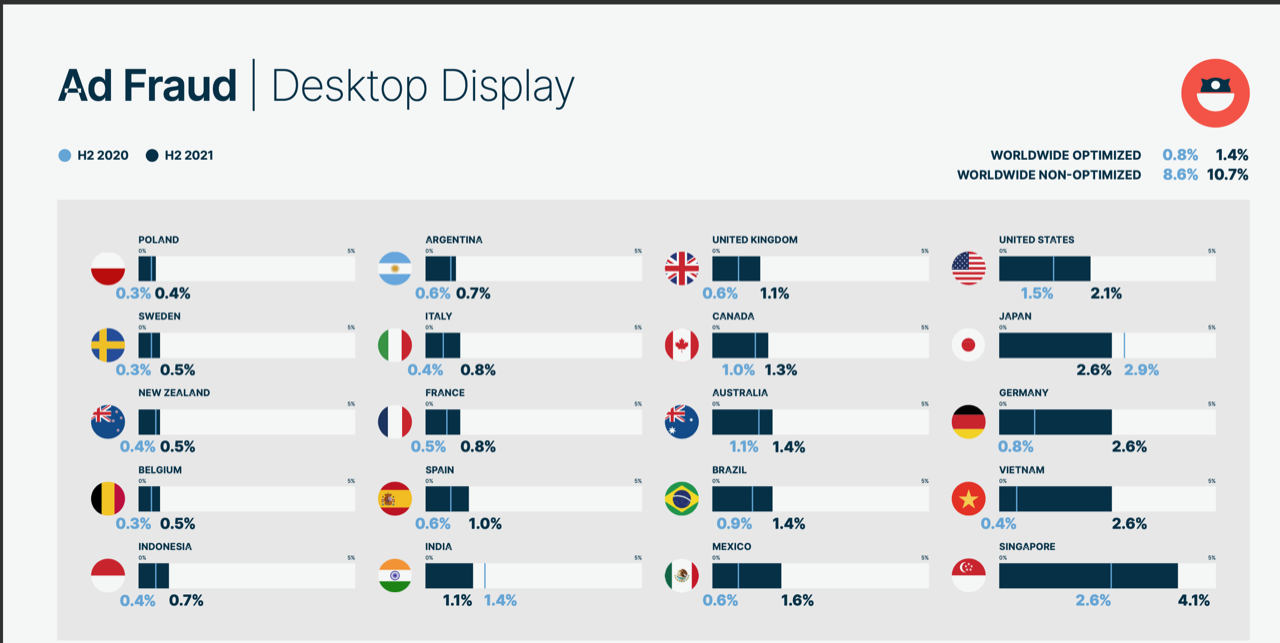 Globally, mobile environments remained safer than desktop, with optimised-against-ad-fraud rates hovering steadily at 0.5% or below for both display and video ads worldwide.

India, New Zealand, and Australia experienced the lowest risk levels for display ads, each boasting annual reductions of 1.5 percentage points (pp) or more. On desktop display, Indonesia reported a sharp decline to reach 0.9% brand risk and a 14.7pp reduction to 1.3% on mobile web display. Singapore reported a brand risk level of 1.0% from 2.4% YoY for desktop display. Programmatic inventory on desktop display had higher brand risks than publisher direct in the APAC markets analysed, highlighting the importance of having a pre-bid and post-bid strategy to protect brand reputation.

Laura Quigley, SVP APAC at IAS, said “It’s heartening to see improved digital media quality performance from emerging markets in the APAC region. Publishers are reviewing the inventory and re-designing their sites to deliver greater attention and viewability for clients and implementing a strategy to target away from risk and reduce fraud. This is leading to an increase in quality inventory. On the buy-side, advertisers must have robust pre-bid and post-bid strategies and deploy verification solutions to make sure that direct and programmatically traded impressions are protected and optimised to provide maximum impact and ROI”.

SoCheers collaborates with MindPeers to strengthen its employees’ mental health

Mumbai: SoCheers joins hands with the MindPeers, adding renewed efforts, yet again, to effectively and strengthen its employees' mental health....