It struck me that there is an entirely unexpected side-effect of the lockdown that has not really come to light!: Priya Shivakumar, National Creative Director, Wunderman Thompson

396 complaints received in the previous 25 days between February 27 and March 22.

Feminist economist Ashwini Deshpande analyzed NCW data for the months of March and April in 2019 and 2020. She calculated the average complaints per day and found that “there is already a jump in complaints related to domestic violence and the right to live with dignity, and a smaller increase in rape or attempt to rape and sexual assault”, all within the home.

Testing times due to the lockdown and though we all know about domestic violence and how vulnerable women and children are nobody talks about it. It is behind closed doors, MediaNews4U spoke to Priya Shivakumar – National Creative Director, Wunderman Thompson on the thoughts behind this film during this period of lockdown.

A topic considered taboo in the Indian society and the attitude it happens only in the lower economic strata ….that myth has been broken in this film?

I think when it is the reality faced by a woman, whoever she may be, wherever she lives, whatever strata of society she may come from, it cannot be a taboo. It needs to be spoken about, it needs to be voiced and it needs to be heard. I think what is equally important is that this is not about a lack in her, does not take away her strength, her purpose, who or what she is, this is about a woman being violated in the most hurtful way, a betrayal of the worst kind and that is just wrong. Yes, it can happen to anyone, anywhere, that is the truth, an awful but irrefutable one. 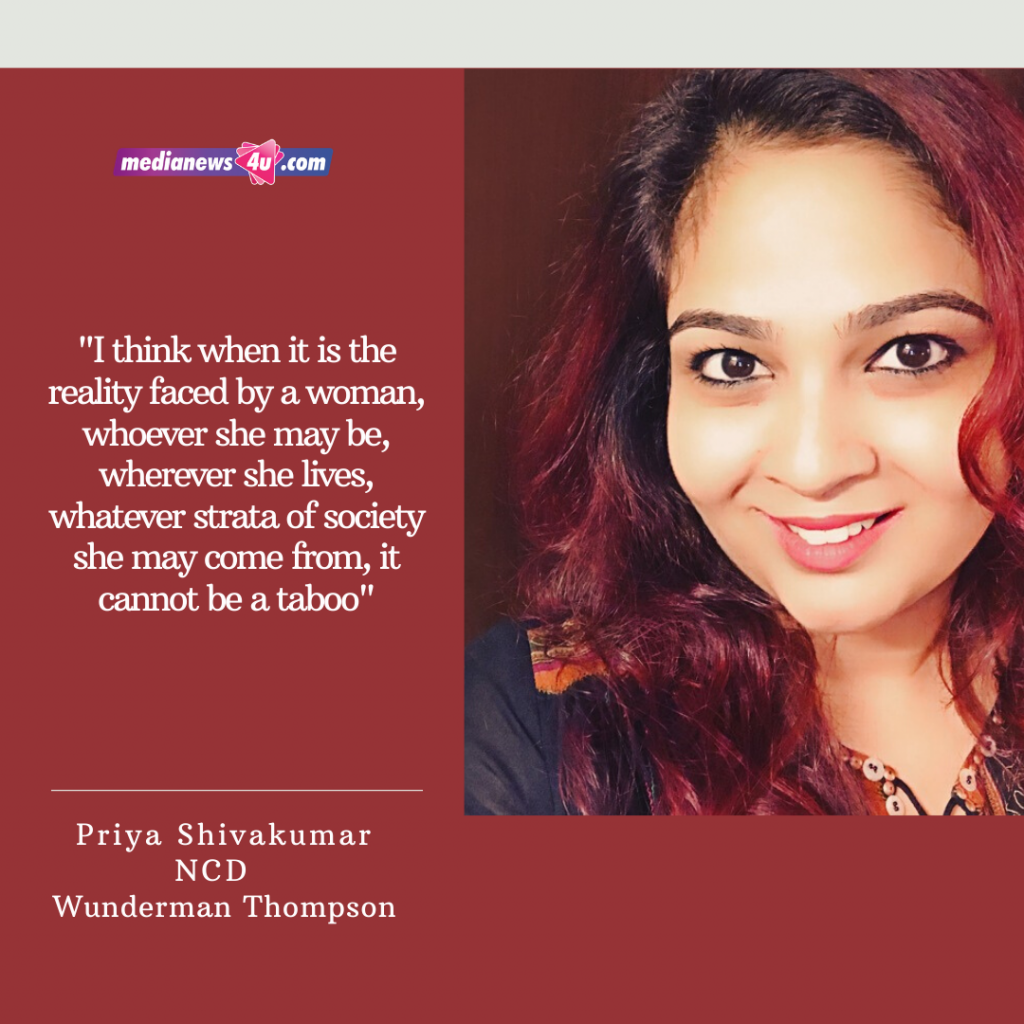 We have been reading about domestic abuse during this lockdown, what made you want to do a film?

It struck me that there is an entirely unexpected side-effect of the lockdown that has not really come to light! Because, this is not a Covid 19 war fought out in the open against an unknown enemy; it’s a silent struggle waged inside the home against an all too familiar one. This was honestly a case of an idea haunting me until I just knew I had to do something about it. A film was an obvious choice since it has allowed me to tell a story of the lockdown that needed to be told.

This film is really dedicated to the sisterhood, to the strong yet silent women everywhere waging this war alone, feeling trapped and at the mercy of circumstances and the lockdown… every day, a challenge of endurance against pain, helplessness and betrayal. 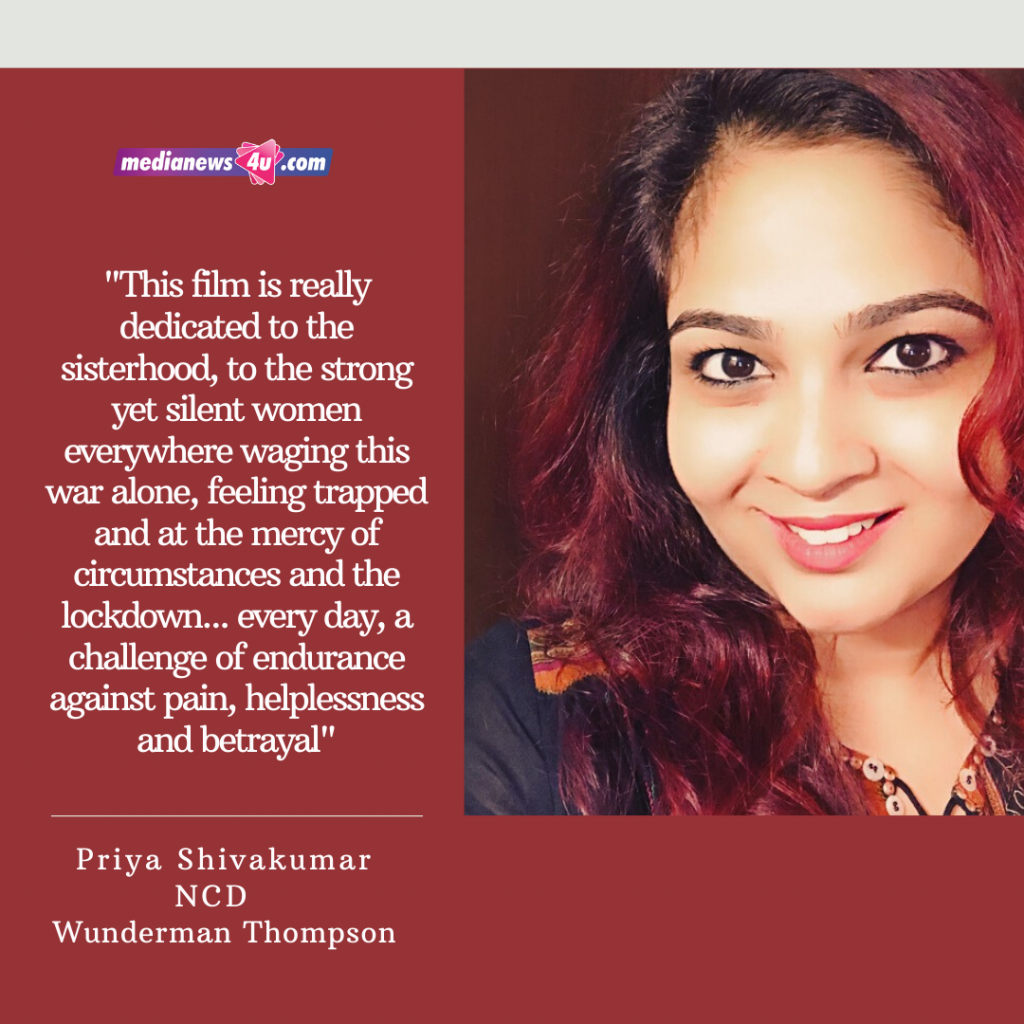 How did you go about conceptualising and shooting this film?

The idea was simple yet powerful. The film starts on what you believe is just a normal day in a lockdown, and as the story progresses, the twist in the tale leads you to an unexpected truth.

The Director Shashanka Chaturvedi, or Bob as he is fondly called and I, knew that we wanted to make a real and sensitive portrayal of these times and circumstances, so the performances, setting, reactions, were all kept real yet cinematic. The character of the woman strong yet vulnerable.

This film was made strictly observing all the rules of the lockdown. We went through the process of finding an actress who was in the same building as our DOP, so when we cast to such specifications, we found a face we really liked and the DOP was locked down at the same place and had a camera with him. We did a pre-shoot of the location with the action on still camera to understand how the action would play out and according to that we worked out the actual shoot plan. Everything was shot and sent to the Director who directed it via video calls until we got exactly the expressions and actions we wanted. Shots were taken at specific points in the day to make the best use of light. So while the whole process took much longer, it achieved the beautiful craft required to tell this powerful story.

Is only a digital release enough for a message like this?

This message needs to travel far and wide to reach how many ever people it can. It’s an important message, for the woman to know there is help during these times and for others to know how to reach out and help someone. 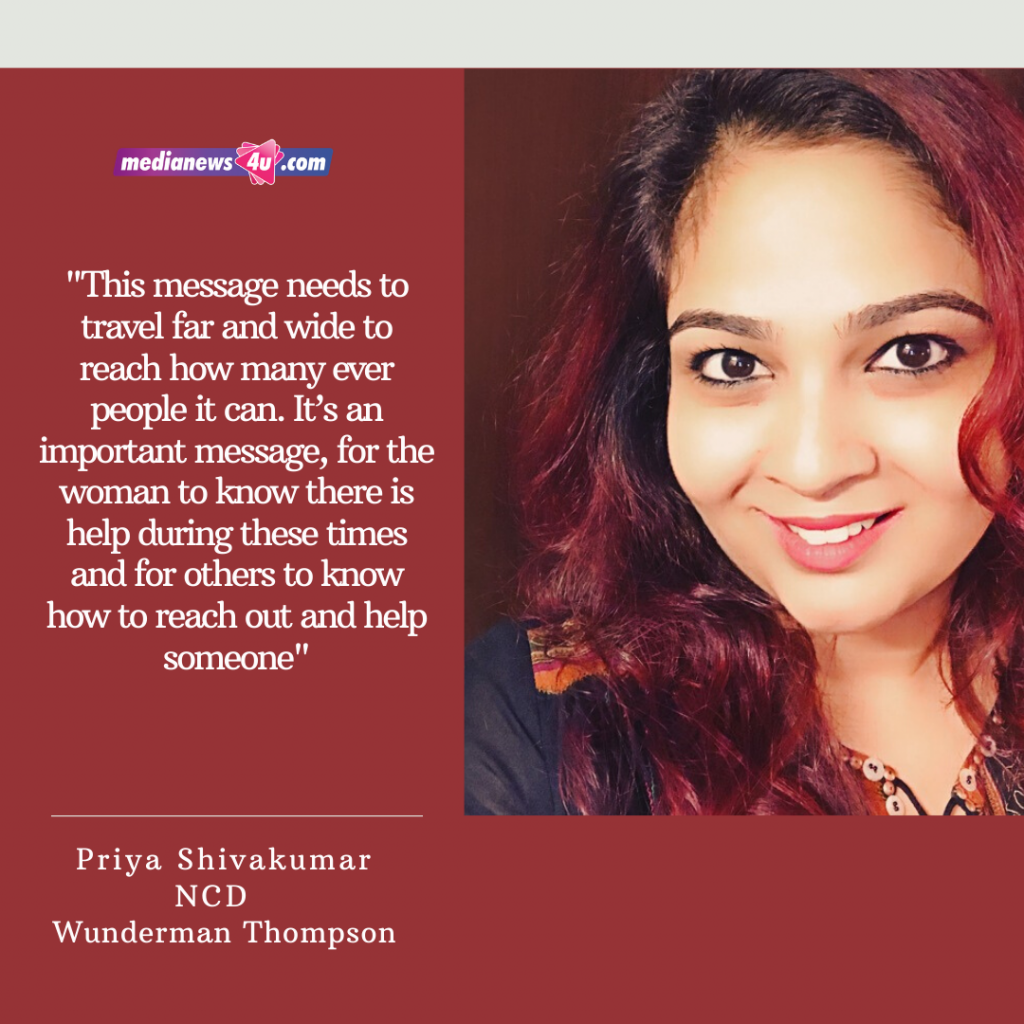 In the course of my research I discovered a dedicated WhatsApp helpline launched by the National Commission for Women (NCW) for cases of violence against women. The call to action lets people, which is us, (the neighbours and relatives, public) know that home is not a safe place for many women and to look out for them, followed by a whatsapp number mentioned as a helpline issued by the NCW. It is also a more discreet way than a call-in line to reach out for help so this works for both the victims and the people around who are in a position to help.