The Kerala State Assembly polls will be held in a single phase today, with 2.74 crore voters deciding the fate of 957 candidates. The polls are very crucial for the Left-led LDF and the Congress-led UDF, and BJP. LDF- the ruling party hopes to retain power for a second consecutive term. The polls are a litmus test for  UDF as they are looking for a comeback to form the government. BJP, which opened an account in Kerala in the 2016 polls, expects to win more seats this year.

The state witnessed weeks-long election campaigns, rallies, and roadshows. The intense political campaign witnessed film stars and national leaders of the political parties campaigning extensively for the assembly election candidates. The LDF, UDF, and BJP have pulled up their socks for aggressive marketing across the medium. The players did not leave any stone unturned- From the regular door-to-door campaigning by candidates to full-page banner ads in mainstream newspapers to social media campaigns, the candidates resorted to all the possible mediums for their campaigning. 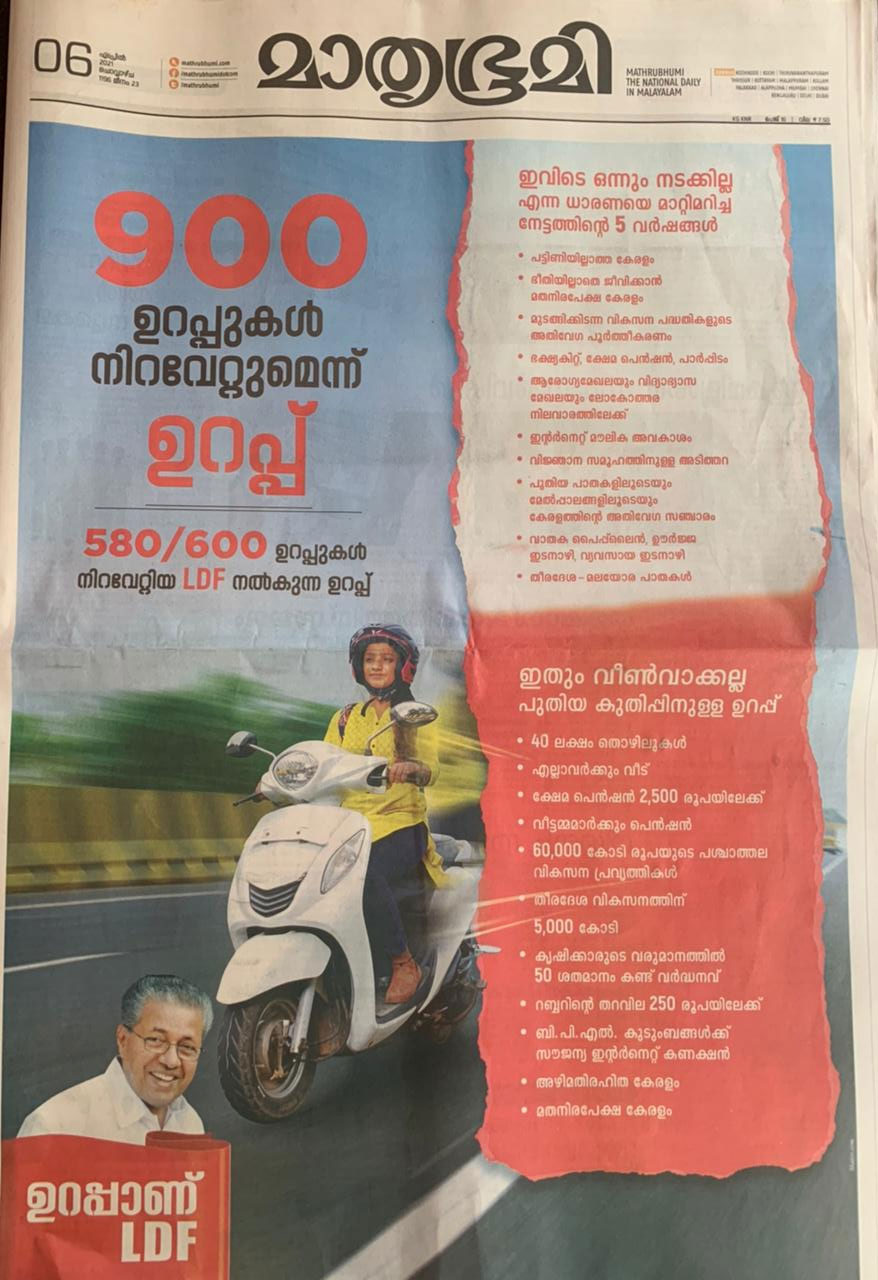 According to reports and sources of Medianews4u, the total spend of political parties, which includes expenses on media advertisement, publicity materials, vehicles, rallies, and processions, stood between Rs 300 to 400 crores.

“The Left Democratic Front (LDF) has spent around Rs 10-15 crore for the Print, TV, and radio campaigns. The OOH industry’s spending will be around Rs 5 crore and Rs 2-3 crore on the Digital Medium. The ad spends of UDF approximately would be around Rs 30 crore, and that of BJP approximately would be Rs 10-15 crores. All three political fronts have explored and aggressively used the digital media for their campaigns,” said a Media Planner based in South India. 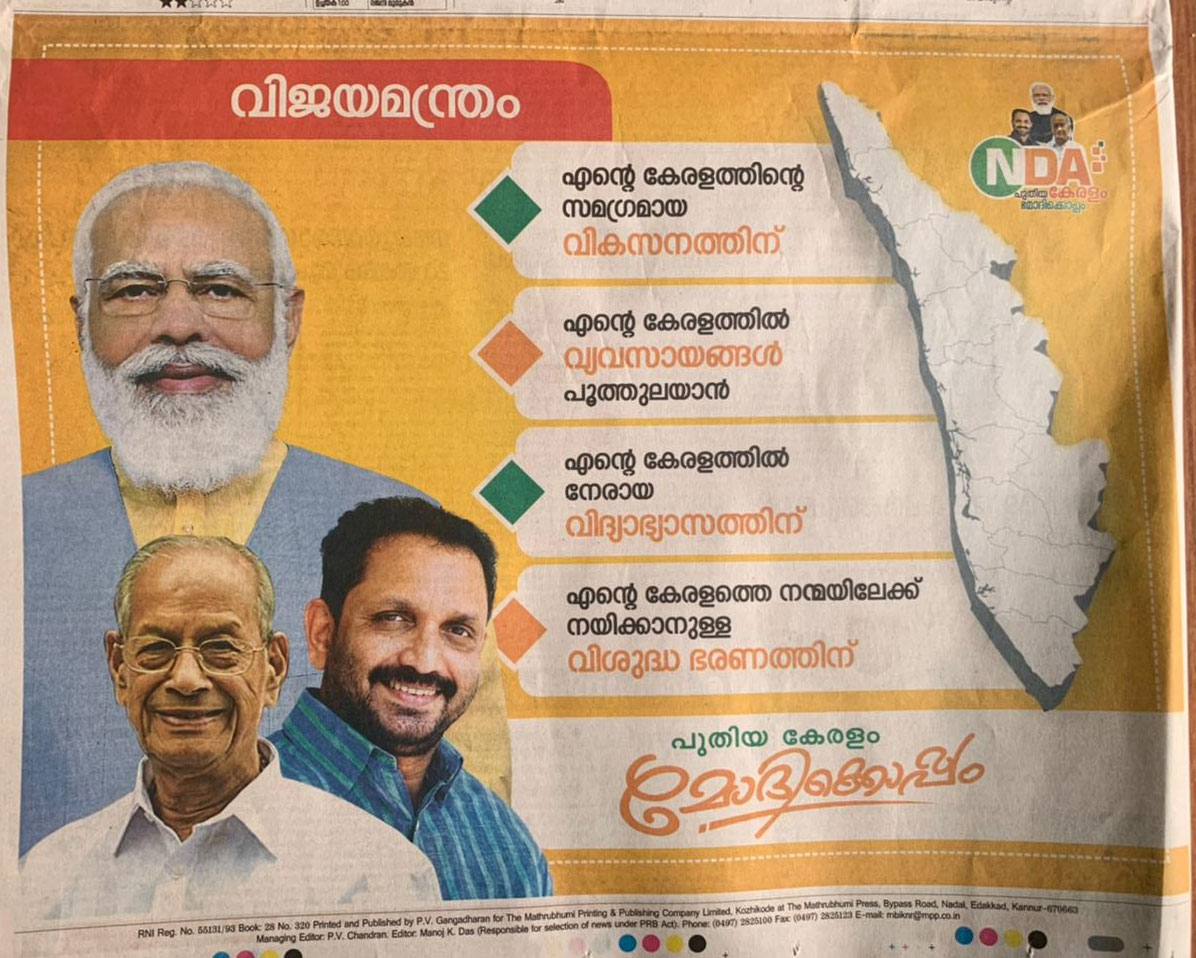 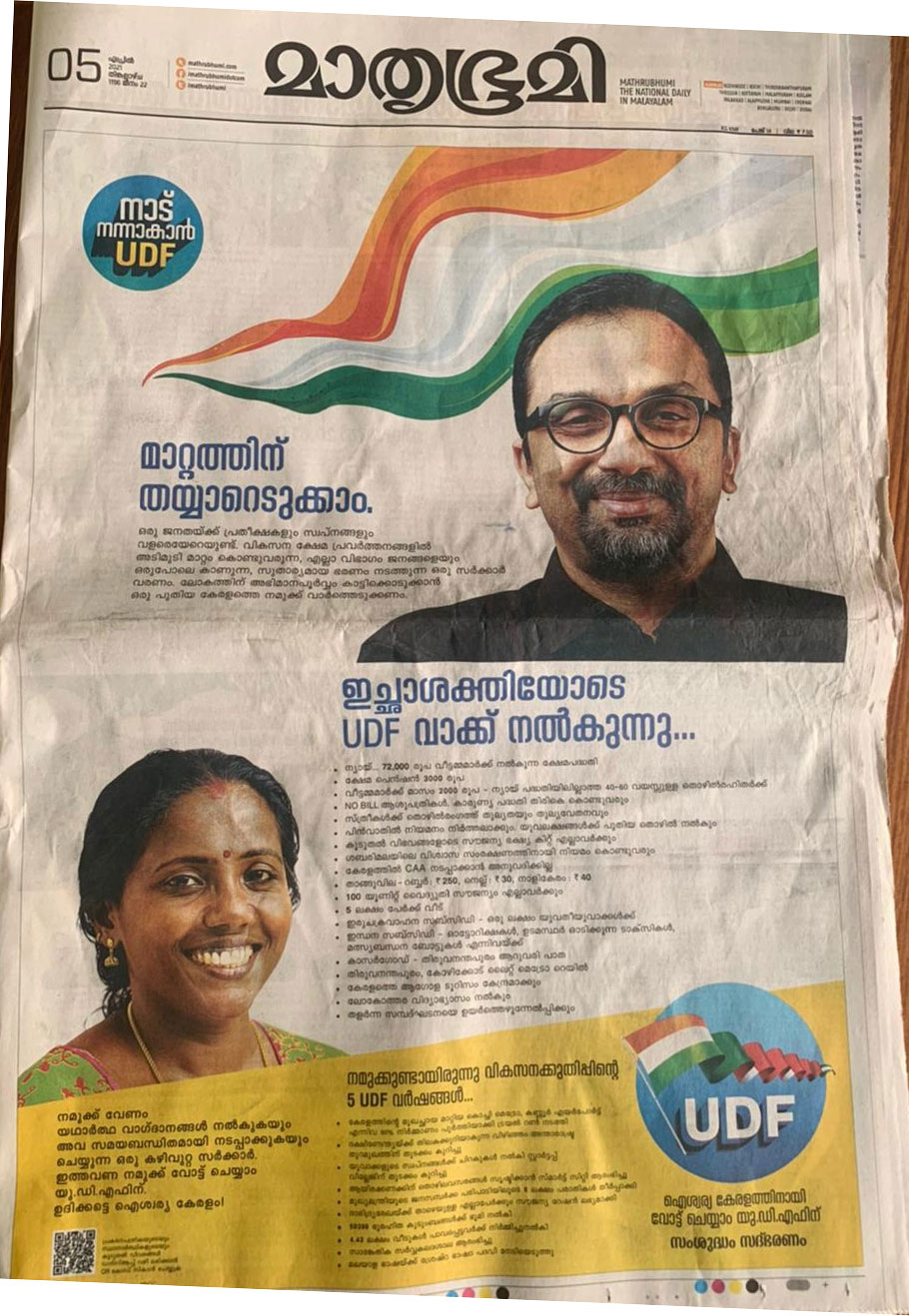 “In 2016, UDF spent around Rs 4.07 for election ad campaigns in which Rs 2.51 crore in the Print medium and Rs 1.55 crore in TV and Radio,” said Jerin James, AGM, Jelitta Publicity, who handled ad campaigns for UDF in 2016 assembly polls.

The campaign for the 2021 assembly polls has witnessed an effective use of digital media. All three political fronts have aggressively used social media platforms and other new media tools to propagate their election manifestos.

The new media witnessed active engagement by all the political parties in the form of elaborate posts, tweets, hashtags, constant digs and allegations against each other and minute-to-minute updates of processions and other activities by teams of political parties.

“We are using all the available mediums for the campaign purpose, primarily Digital media platforms are used to reach out to the common public extensively. The LDF has created more than 1000 WhatsApp groups which are used as a major digital campaigning tool, Videos depicting the developmental activities and achievements of the government in the last 5 years is propagated through these groups,” said a highly placed source inside the LDF social media team.

“An innovative strategy LDF implemented as part of election campaigns is tackling the floating votes in constituencies across the state. Through extensive research, we have witnessed the neutral voters, and the LDF team approaches them through call centres. The team identifies and documents the problems faced by neutral voters. The solutions are suggested through local leadership,” added the source. Political parties and candidates have outsourced their promotions and campaigning duties to professional agencies.

Speaking to Medianews4u, Raju Menon, Managing Director, Maitri Advertising, who is leading the campaign for LDF, said, “The biggest challenge we faced while planning the strategies for the LDF was to come up with a slogan. In 2016, it was ‘LDF Varum  Ellam  Sheriyakum’ (LDF will come, set everything right) which became a  quite popular tagline. After a couple of brainstorming sessions with the client,  we came up with the slogan, Urappanu LDF (Yes, for sure, it’s LDF), which became an instant hit, and few brands have used it as a theme for their ad campaigns. In 2016, for the first time, passenger train exterior was used as a medium for a political campaign. It featured the LDF campaign slogan in Malayalam, ‘LDF Varum, Ellam Sariyakum’. For the 2021 assembly polls, Auto Rickshaws are used for campaigns by a political party for the first time in Kerala.” 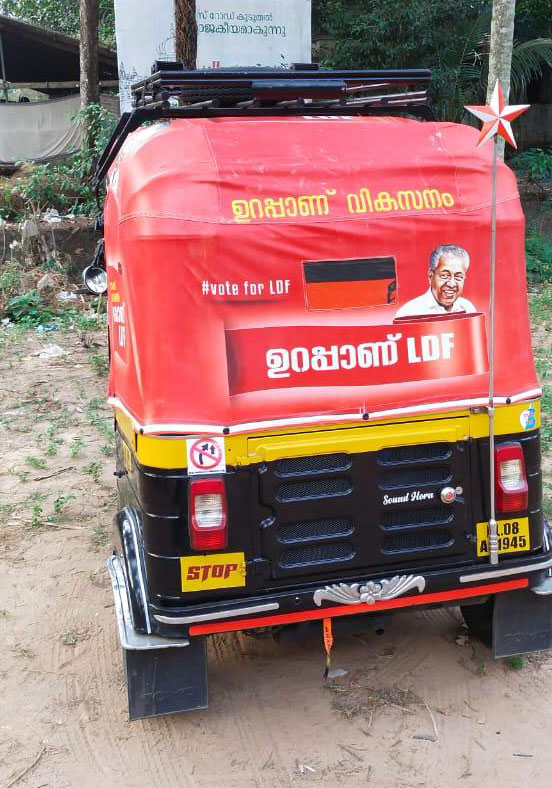 He continued, “A brand integration inside the primetime serials was done as part of the campaign. We also conceptualised a song with the theme ‘Urappanu LDF’ which became viral within hours of its release.”

Elaborating on the strategies of UDF for the legislative assembly elections, Ajith Kumar M A, Vice President (Operations), MediaMate Advertising India – UDF’s ad agency said, Our mandate was to take UDF’s path-breaking development plan to the masses. Key promises were highlighted and disseminated mainly through print, TV, online and outdoor. Overall, a positive and forward-looking tone was adopted, which is in line with UDF’s approach to politics. Claims of LDF were countered through facts rather than rhetoric. The flagship scheme NYAY was showcased prominently in our communication. Thanks to the support, insights and inputs from UDF leadership, we were able to do justice to our role as an ad agency.”

Speaking on the innovative campaigns, Ajith said, “The UDF campaign revolves around the much-appreciated UDF Manifesto, an approach which is innovative in itself and hasn’t been done before. The Manifesto Committee came up with very specific promises and schemes which we highlighted in our ad campaign. We were focused on state-level communication, speaking to different cross-sections of the Kerala society, rather than targeting specific constituencies.”

Ambika TM, Founder and CEO, said, “We at MarkeSynergist Private Limited believe that research is the key to any successful campaigns, and we followed a research-oriented approach towards positioning and building the image of the candidates. We identified the strengths and weak areas and focused on the strengths, and developed a strategy to amplify them. We provided primary research insights and on-ground intel to understand the sentiments of the public towards the candidates. Instead of a one-way communication approach, we created a campaign to engage and connect with the public and to stir up conversation around development.”

With the assembly election results out by May 2, we have to wait and see whose aggressive marketing strategies and campaigns have garnered the public’s attention and tilted in their favour.

Mumbai: Amidst the burgeoning cricket fever that has engulfed the nation, homegrown short video app, MX TakaTak has recently announced itself as...

The Indian Performing Right Society (IPRS), the sole copyright society representing the authors, composers, and publishers of music, has been...

My love for life, music, movies and food helps me remain spirited along the way: Suraja Kishore – BBDO India