LaLiga is now looking to understand and grow better in the traditional football regions and metropolitan India: Jose Antonio Cachaza

LaLiga is a global, innovative and socially responsible organisation, a leader in the leisure and entertainment sector. It is a private sports association composed of the 20 teams in LaLiga Santander and 22 in LaLiga SmartBank, responsible for the organisation of these national professional football competitions. LaLiga is the football competition with the most followers on social networks in the world, exceeding 150 million, on 16 platforms and 15 different languages. With headquarters in Madrid (Spain), it is present in 41 countries through 11 offices and 44 delegates. The association carries out its social action through its Foundation and is the world’s first professional football league with a league for intellectually challenged footballers: LaLiga Genuine Santander.

At the event, Medianews4U spoke to Jose Antonio Cachaza, Managing Director, LaLiga India on their various partnerships and the growth of LaLiga in India

It’s been five tears for Laliga in India, how has the journey been?

Hectic and it has also been a learning process, as when I came to India I did not know much about Indian market or the Indian sports scenario. From the beginning we had MSL working with us and we could not have done it without local support. It has been an evolution and trying to understand the sporting scenario, now we have things on track. From the beginning we have had a warm reaction from the fans; we have tried to give them a leader through different activations both online which is the heart of our India operations, give constant online connections, social media connections and also on ground events.

In the past two years thanks to the pandemic we have not been able to do it, and finally last month we did a watch party in Bengaluru and it worked well for us. We want to do more such events to connect directly with our fans.

In India Cricket is worshipped, how has LaLiga broken that barrier?

That is very difficult and there is no way we can compete with cricket in India, but we did find a space and there are different ways to approach this. We needed to find our space alongside cricket and that is why we chose Rohit Sharma as our brand ambassador. We did face a lot of criticism from our fans saying what next Bollywood Star? We said why not. First and foremost Rohit Sharma is a legit football fan and a huge Real Madrid fan and the message to the cricket fan was you can also like football and LaLiga alongside Cricket. 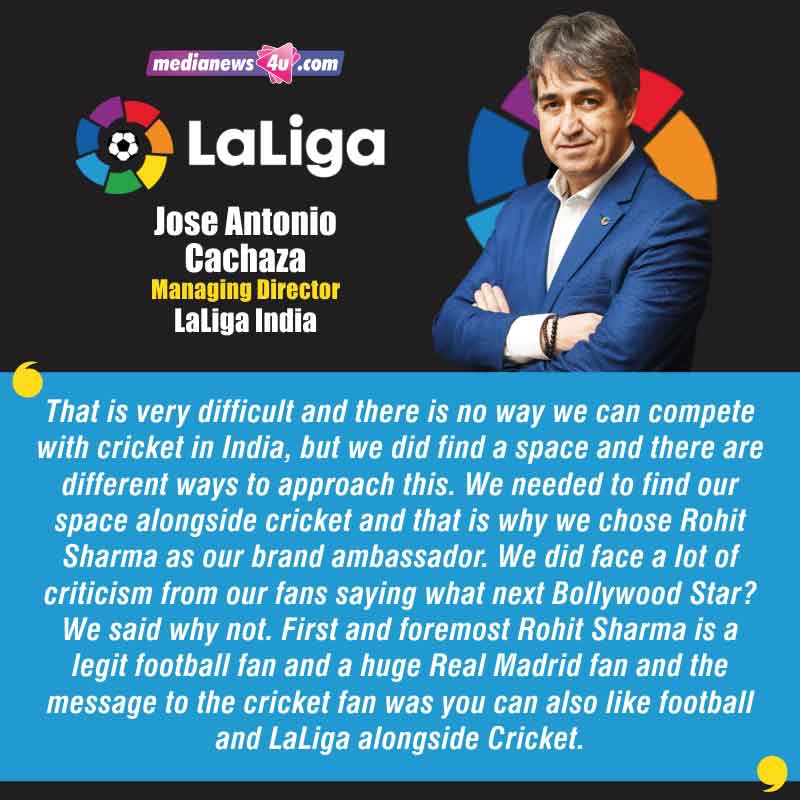 The great thing about sports is that it is not monogamous, it’s totally polygamous, you may like four different sports, I like football, basketball, Formula 1 and NFL, four different sports with no connect but one enjoys all of them. It’s not that we want to take them away from cricket but when you have finished the great cricket matches have a look at football. Finally we have found a space there, growing alongside cricket and trying to understand what are the markets we can grow better, the traditional football regions and metropolitan India.

LaLiga has had an association with Dream 11 from 2019, what made you partner with them?

This is a very easy answer, there are partnerships/associations but this one with Dream11 is special. They have a fan base of 100 MN, 99% of them are there because of cricket. The fact that Dream11 announces a LaLiga fantasy among those fans it increases our reach and gets us closer to other fans, who will not look at LaLiga if Dream11 was not there.

Viacom18 partnership, what is the ROI this partnership has delivered for LaLiga?

Any sports league looks at a broadcast partner who has a strong reach to the market, and a strong connection so to connect with the fans easier. Viacom18 is new in sports but they are one of the strongest networks in India. We are still going ahead with them as they are developing their sports business. The launch of their sports channel will be good for us also.

Has LaLiga gone beyond the urban audience and reached out to the aspiring Indians in the tier3/4 markets in India?

To be honest, offline we can’t as we don’t have the structure and budgets but online yes. It was a pleasant surprise that 40% of our audience came from rural India, be it Bihar, Kerala or Bengal. Another surprise was the following 55% men & 45% women, and this was confirmed by our market research team. As you know digital has gone big in India with data being cheap, but it is a mix of other things also. The huge women following for LaLiga outside of the traditional markets in India, I strongly believe that in Tier 1 and cities, this new generation of Indians is to look outwards. Today we are seeing more and more women working and in positions and there is a change in society, probably this is one of the reasons for the huge women following.

New Delhi: Sirona Hygiene, a fem-tech startup rolled out their new ad campaign for Menstrual Hygiene Day to address the...