Gordon Bowen is the Founder and Global Chairman of McGarryBowen, who founded the agency in the year 2002 with his partner and co-founder John McGarry. Gordon Bowen founded McGarryBowen after having worked with Ogilvy & Mather and Young & Rubicam.

In this Leaderspeak, Gordon Bowen talks about his journey of working with brands like American Express and Intel. The changes he has observed in the global advertising industry; his thoughts on the Indian market and a lot more.

How has your journey of forming and leading McGarry Bowen been?

It’s been a shock that we have been this successful. My partner John McGarry did not ever imagine that we will be a global powerhouse. We just wanted to be close to our clients. We wanted to set our own values. We had no idea that we would grow to be agency of the year for three times and that we’d be the fastest growing agency in the history of Madison Avenue.

One lesson I learnt at the beginning; which has been the same till date is, some holding companies and some people follow the money. Who have the money. I don’t! I follow the idea. The best idea wins and the money will follow. Therefore I’ve always tried to keep my focus on the client and their needs.

We continue to win big and large clients like American Express etc which we are very proud of and very grateful for; and I’m really grateful to serve these brands. It’s a responsibility to serve a company with a storied history, whether it’s Intel or American Express or Proctor &Gamble. I want to stay close to the clients and stay close to the work. I make certain that I do that but I make it possible for my staff to do it as well. 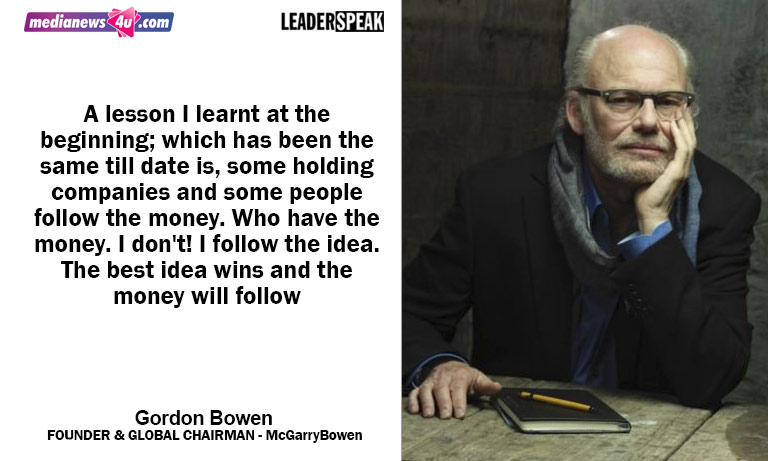 What were the few challenges that you faced while you started off McGarry Bowen?

It’s going to seem like a weird challenge but we grew too fast. And if we were in a machine business and you just had to buy another computer or you had to buy another lug nut. I had to buy another gear it would be one thing because they’re manufactured, but we’re in a talent business. So we had to get, find and gather people with our values and with our level of demand for expertise in their various areas of talent. That was really a challenge.

If you win six or seven pitches in a row and suddenly you have to hire two or three hundred people, between all your client meetings. You have a client need and you don’t want to get someone who’s not up to the task or not up to your values or not fitting what you promised the client that was probably our biggest challenge.

Speaking about values…  What are the values which you look at in any advertising professional while hiring them?

I look for a number of things, but I’ll go back to my vision.

So that’s a cultural vision. You need to be a good person, because we have to do great work as we only take clients that we believe in. I love my job and I’m not going to let them down. I’ve taken a responsibility of their jobs in our hands and we take it very seriously. So as a result, these are the things that I look for in people the first thing, I don’t start with talent; I start with values. What does that mean? It means that you are not a me person. You’re a we person. We’re not like artists of Paris, painting a painting on by ourselves. We work in a collaborative culture. Therefore I have to be able to work with a strategist, an art director, the production department and with people outside of our work such as the clients.

Number two; you have to realize that we’re in a service business and therefore we serve and so you know, the clients are paying our salaries and whether you like it or not, we serve them. Sometimes we think that something is not right or maybe we can do much better or that’s not going to serve the client well because we think you should do that… but in the end it’s the client’s money not ours and it’s their brand not ours and we have to respect that. 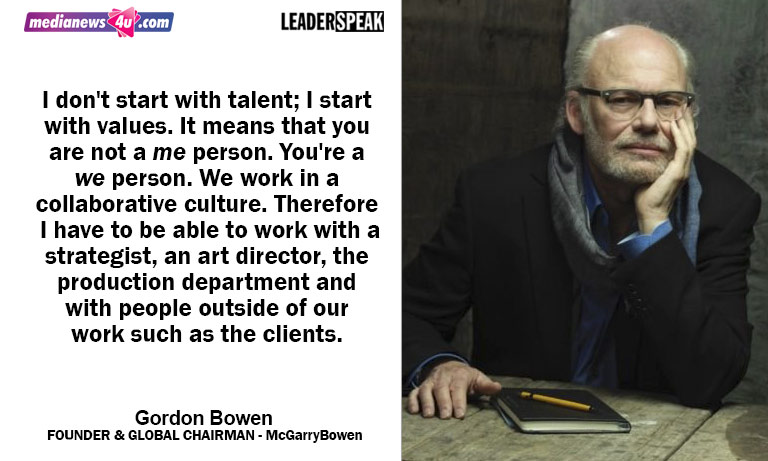 What is your understanding of the Indian Market? What in particular do you like about this market?

What I like about India is probably not the things that most people see in terms of the masses. The size of the population alone means it’s a huge market and even if we have a small percentage of it, it is a huge market which makes it a world power.

There is a sense of energy, optimism and can-do attitude in India that manifests in a very simple way; which is the adoption of technology in terms of just a cell phone in every economic level where people are tech enabled which means for our industry we can reach virtually to anybody that we want to. It’s got numerous opportunities.

What are the changes you have seen in the entire advertising culture?

Content is now disposable. We used to create stuff and you could run for as long as you wanted because it could never failed the testing.An ad ran for like ten years. So that’s changed. We’re now we’re moving into a world of where creativity is happening everywhere from not just advertising people but from users on YouTube also. The average consumer is also creating content. So things are disposable. We watch them … and we throw away … there is a cost benefit ratio as it gets to what are we investing in creative. We have to be able to create, what I would call a platform thinking not campaign thinking but strategically led platforms. So that hundreds of pieces of content can amalgamate to the brand connect.It could be a sticker on a lemon, from a supermarket to a giant billboard. It doesn’t matter it all has to come back to the brand. So you have to think about that in a very large way.

You have to think about whether something was created by the consumer themselves; whether it was created to be only watched once, whether it was 10 seconds long. Mass media forms like television was so expensive at least in the USA that the media times got shorter and shorter. So we went from 60 seconds to 45 seconds; cut down to 30 seconds. Further cut down to 15 seconds and to 10 seconds. There’s a limit to how much story you can tell in 10 seconds and how creative can you be. You certainly can’t be emotional, you could maybe make people laugh but you could never make people cry. We’re in a world where something can be 2 minutes 38 seconds long; even though being so long it doesn’t matter; if the consumer loves it, you don’t have to buy the media, the consumers will share it.

The onus is now still on creatives to create that, which people love but here’s the trick it’s not enough if it entertains you. The art of it is the person that can create something which the consumer will not dispose of or will not pass over or will not click through.It has to be so creative and engaging that they’ll do it. But at the same time remember it is the way the client wants the consumers to remember the brand which is an art as well as the science of it.