MemeChat is an application that was launched in 2019. It has emerged as one of the most popular home-grown social media networking apps for Generation Z and millennial. The app gathered a dedicated following in just a year with more than 1.2 million monthly active users (a current user base of 6 million Downloads) and over 20 million memes.

MemeChat recently secured more than USD 1 million in its second round of funding led by Beenext, a Singapore-based venture capital firm., became the only Indian start up to be included in the ‘500 Start-ups, one of the most active global venture capital firms’, a distinguished accelerator program for its 27th batch in 2020. The company recently launched India’s 1st exclusive NFT Marketplace for Memes called The Meme Club. It was also awarded second in the AtmaNirbhar Bharat Award, under the entertainment category amongst 6,940 entries from across the country.

In an exclusive chat with Medianews4, Taaran Chanana – Managing Director & Co- Founder, MemeChat speaks on the recent Meme campaign, the trends gobally and in India and much more.

Memechat is now 3 years old, how has the performance been?

MemeChat has successfully carved a recognition of being one of the most popular home-grown social media networking apps, entirely modelled around the ‘meme culture community’. Over the last three years we have built one of the largest meme communities in the country. With over 1.2 million monthly active users (current user base of 6 million Downloads) and over 20 million memes generated on the application, another step that we took to empower this ever growing meme community was to provide a cryto platform to monetize memes via The Meme Club – a NFT Marketplace. Our strategic partnerships with top brands like Hotstar, Amazon Prime Video, Moj, Sharechat, EaseMyTrip, McDonalds, India Terrain, Slice, MediBuddy, PVR, NiyoX, MxPlayer, Paytm, Netflix, Zee5 and Codashop, have enabled our meme creators to benefit from our create and earn business model. 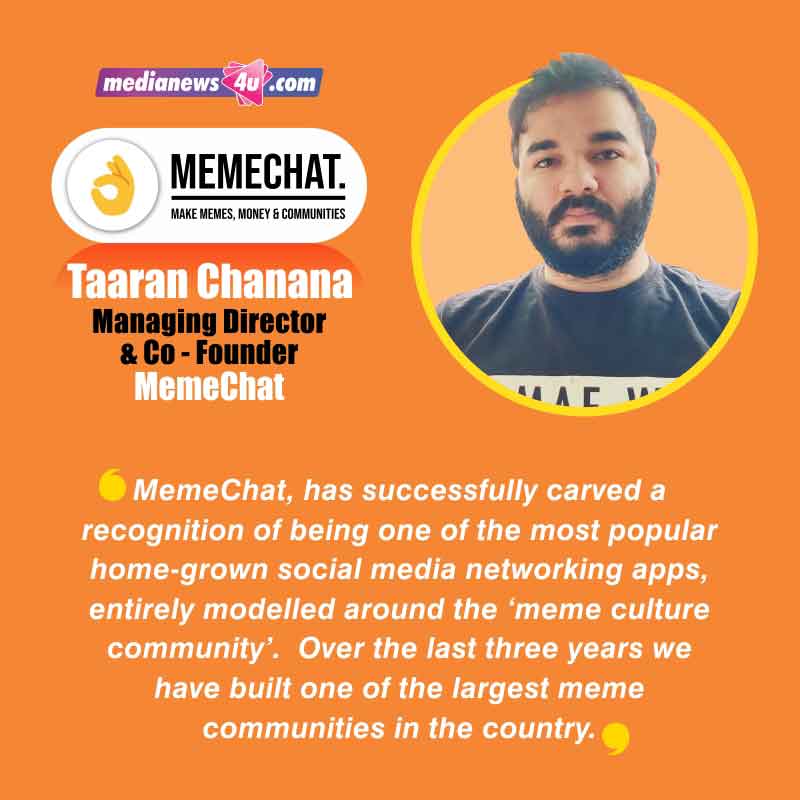 This recent campaign #FakeAutos of yours has gone viral, how are you looking at it?

With the world commuting back again in a seemingly new normal, our Auto Campaign received an overwhelming response both online and offline. Executing this campaign in one of the busiest cities – Bengaluru, we capitalised on the innate human behaviour – xx. Within the first 5 days of the campaign, we witnessed 75 million tweets (and counting), 3 million likes, and shares. After the tremendous response in Bangalore, we have geared up to roll out the next offline campaign in Delhi NCR.

What is the TG that reacts to such Meme’s?

For the #FakeAuto Campaign Gen Z and millennials is the target group.  The idea is to grab their attention and remind them that some great content is just a glance away. Overall, we have realised that although the primary age group of our meme community falls under 15 to 25 years, we do have an audience that is much older that are avid users of Instagram, Twitter and Facebook. 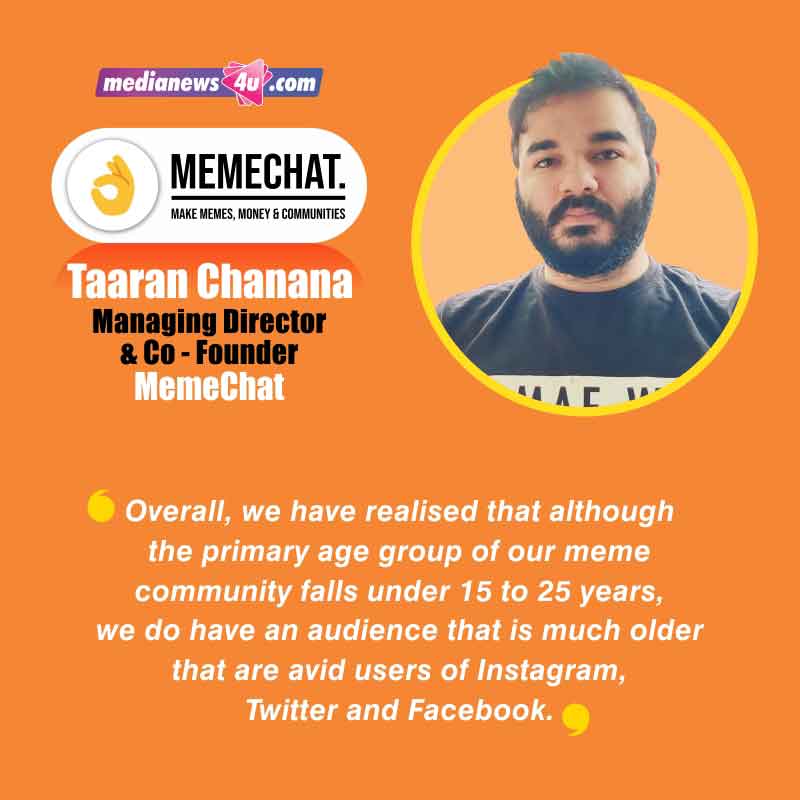 Are Memes only targeted to the millennials in Urban geographies or do you have an audience in the Tier 3/4 geographies?

Memes are something that everyone connects with. Anyone with an internet connection can co-relate to a meme. It is a medium where people can associate with each other which bring out a sense of belongingness among the community. We have users who love creating memes. Memes are like an art form for them. Apart from this, we have people who are connoisseurs of memes. The audience love memes as a form of entertainment and want to share it ahead with their friends and community. We have varied age groups who enjoy memes for different reasons resulting in fun & happiness. 80% of our users are from Tier 1 cities, 15% from Tier 2 and 5% from Tier 3 cities. Hence, memes are targeted to all tiers of audiences and not a specific one. However, at times we face barriers when memes are specific to a city or a language, otherwise there isn’t much difference.

As a home grown platform what have been the challenges?

The Indian Start-up ecosystem is the third largest in the world and has notched up record investment of nearly $ 36 billion in privately held companies this year as demand for digitisation grew manifold amid the Covid-19 pandemic. One major factor contributing to this is the various hand-holding measures provided by the government. The 30% taxation on virtual digital assets along with the 1% TDS on transfer of virtual assets above a threshold is a strong endorsement by the Indian government.

What are the global trends when it comes to Meme’s?

Global trends usually emerge from popular celebrities or news. Currently the ‘crying face’ filter on snap chat has been going viral globally. Infact #Instagramdown was trending recently when the social media app went down on Monday. 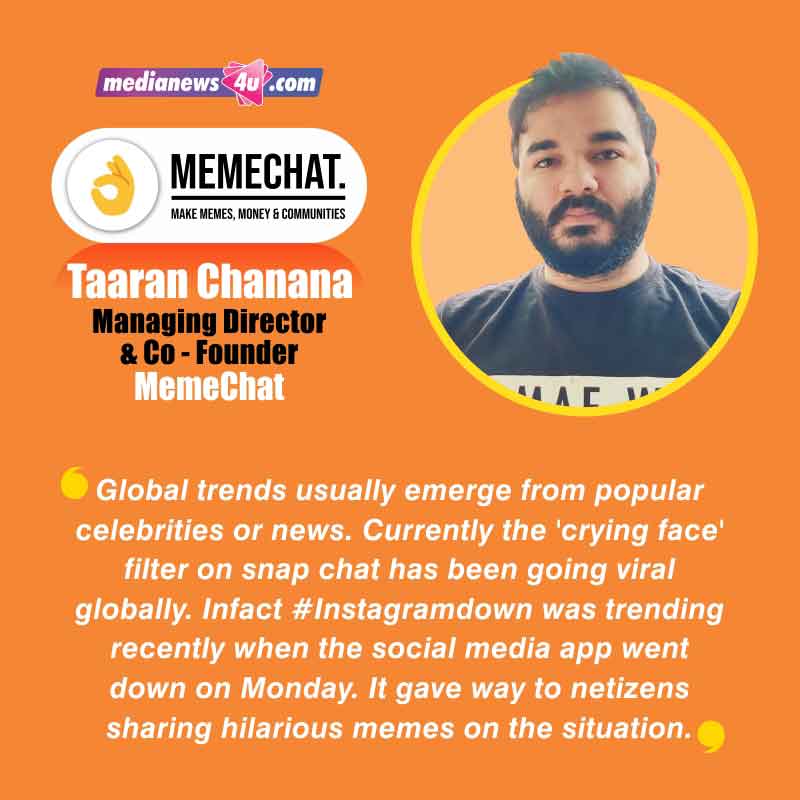 It gave way to netizens sharing hilarious memes on the situation. Also, at the 94th Academy Awards on March 27, 2022, actor Will Smith walked onstage and slapped comedian Chris Rock across the face which led to memefest across the internet. Hence due to their light-hearted and crisp nature, memes have the potential to go viral within seconds and are appreciated by a mammoth consumer base.

I have so many questions… pic.twitter.com/LJpJCcFcHL

I raise you this pic.twitter.com/FlQLyASP9q