MyTeam11 is one of the online sports companies which has been a longstanding name since the early days of the industry. The fantasy sports company which ran a multi-platform campaign during IPL featuring seven brand ambassadors and increased its marketing spend by 3.5 times. In the current financial year, they have increased marketing spends to Rs 28-30 cr intending to target the tier 2 and tier 3 cities. The average monthly users since the IPL 2020 season has increased by 3X which is a testimony of the fact of the popularity of the application.

In February 2020 the brand also launched their ancillary multi-sport aggregator platform SportsTiger which has so far been a major competitor to Dream 11’s Fan Code and has also launched two exclusive content series called “Off-the-field” and “Cricket Talks” to provide unique content to the users. MyTeam11 apart from core fantasy sports also has offerings like MyteamRummy, MyTeam11 Quiz – the first-ever by any fantasy sports platform in the country and recently launched MyteamPoker.

Online sports or fantasy sports contributed in a huge manner to the national economy and this has contributed to change in the consumption patterns of sports in the country and have given the fans a new way to engage with their favourite sport. The Indian fantasy sports market has shown enormous growth over the years. Online fantasy sports platforms paid GST to the tune of 445 cr in FY 2020, up from 166 cr in FY 2019. Cricket has been the top-rated sport understandably. But these fantasy applications have also contributed to sports like football, kabaddi, baseball, volleyball, and basketball.

Manvendra Singh Rathore, CMO, MyTeam11 in an exclusive chat with Medianews4u speaks on the Fantasy Sports industry, MyTeam11 and the way forward for this industry.

Online gaming has taken off in India in a big way, your thoughts??

There has been a constant increase in the number of online gamers throughout the world and India too has seen a significant growth. We have seen a drastic boost in the online gaming industry during these months of lockdown. Along with ed-tech, I think online gaming is the only other industry which has benefitted from the situation and has also come out to support the Indian economy in a major way.

As far as statistics are concerned; according to a Google-KPMG report, India’s online gaming industry is poised to grow to $1 billion by 2021 and according to another report named “Gaming – India Story” by Maple Capital Advisors, the industry has attracted about $350 million in investments from venture capital firms from 2014-2020. The OFS operators have come of age and backed the biggest cricket league in the world and ensured that it became successful without any fallout which was very evident during IPL 2020. I believe that the growth in our industry is a major boost to the sports sector overall as both are interrelated and it is here to stay in the long run. 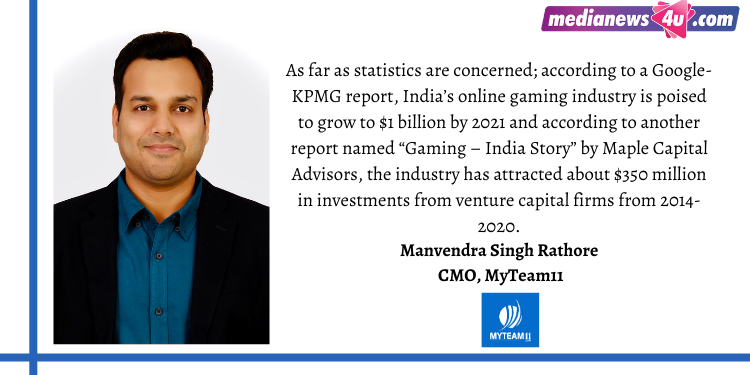 There are a few states now banning online games and ASCI recently issued new guidelines regarding real money in online games, your response on this?

With NITI Aayog taking the responsibility of playing a role in the structuring of the Fantasy Sports Industry in the near future, it is evident that the Government has recognised the fact that OFS platforms are playing a key role in the economy and the growth of sports in the country. This is a very positive move and we are looking forward to the developments. In addition, we have also gone through the guidelines issued by the Advertising Standards Council of India (ASCI) and from the very first daywe have been very particular about our communication and we intend to adhere to them.

How was the performance of MyTeam11 during the IPL? How much of participation did you see in terms of downloads in Tier 3 & 4 markets?

Cricket being the fan favourite game in India and the return of live cricket action has created more excitement for the fans. During every IPL season we usually see a significant growth in the number of users but during this season, we saw a 40-50% rise in the number of participants compared to last IPL.The key feature of this rise was we saw a huge number of it coming from Tier 3 and 4 markets as more people got the time to involve themselves in fantasy gaming as it was one of the most immersive mediums for the fans to stay connected to the game.

If I am to talk about our monthly engagement, we have seen a 3x increment in monthly active users during IPL months. 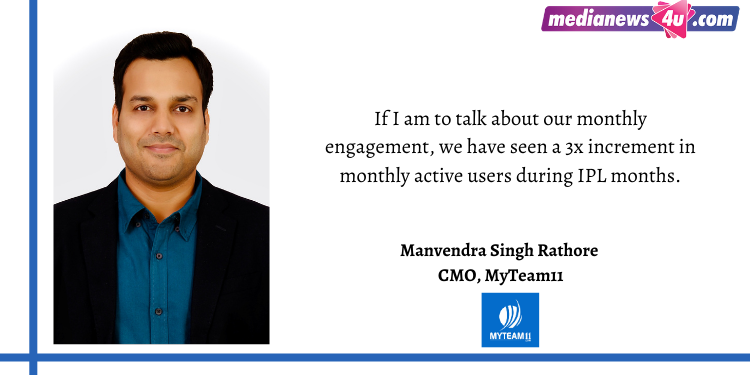 MyTeam11 marketing spends this year at IPL was 3.5X, why did you think it will work? The advertising campaign is still on, any reasons?

Cricket was coming back after a long period of time and that too with the biggest cricketing extravaganza of the world. India being a cricket fanatic nation we knew that everyone just wanted the tournament to get underway and be a part of the same from the first ball to the very last ball bowled. Considering, there were no fans allowed in the stadium, fantasy gaming was the most immersive medium to engage with the sport and in turn feed into the viewership of IPL.

Hence, it was but obvious that more visibility across mediums was going to enable us reach out to a wider audience base in a market space which is highly competitive. Therefore, we were very strategic in our decision to ensure that we reach out to the audience in the best possible manner and hence, the spend.

The result of the same was visible from the very first match of IPL 13 as it witnessed a 2X increase in user engagement as compared to the final match of IPL 12.

Yes, we have still continued with our marketing campaigns as it may just be the end of IPL but the beginning of the cricket season. Hence, it is important for us to stay connected with our audience and keep the communication alive. 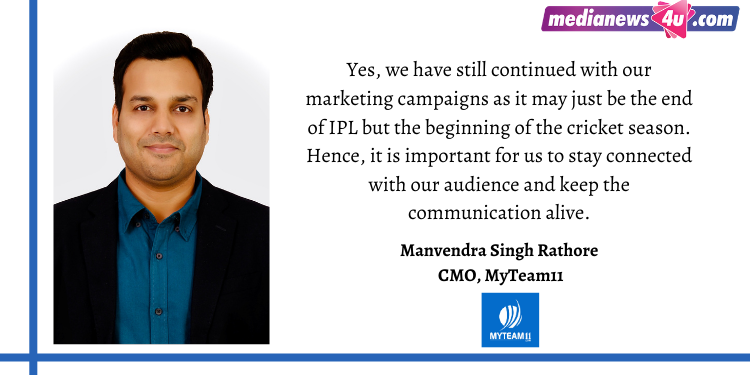 What have been the earnings post all this spending?

In IPL 2020, we have received an overwhelming response. We were able to generate a revenue which was 2-2.5x higher than the last season and we are expecting even higher numbers in the upcoming season.

While IPL 14 is 4-5 months from now, we are packed in terms of cricket from all around the world. India is already touring Australia, the Big Bash League is also on and New Zealand is playing West Indies. With so much cricket happening and 2021 being a high intensity season each tournament becomes a stepping stone building to IPL.

Our roadmap is very clear that we have to keep our engagement constant with the fans so that when we reach IPL in the coming year we are only looking at a further exponential growth. 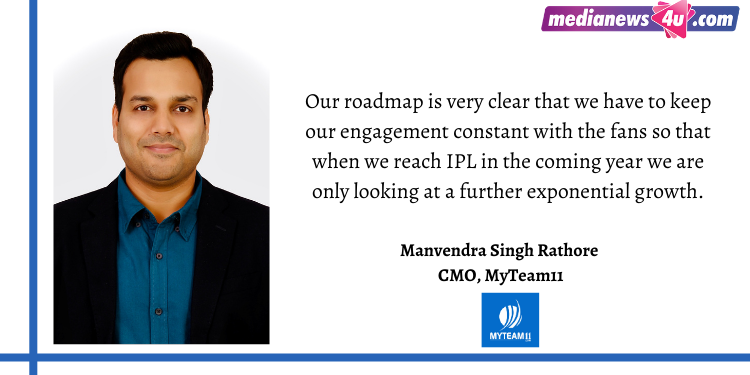 During this IPL season any significant partnerships? Will it continue into the next season?

Strategic partnerships have always been a strong point for MyTeam11. They have played a key role in our growth and building a loyal user base. However, we are still in the process of evaluating the partnerships for the next season and will take a decision keeping in mind our vision for the upcoming season. We will keep you posted on the progress, once we are closer to the event.

Where do you see the whole online gaming industry in the next 3 years?

Online gaming industry has become a key spoke in driving the consumption patterns of sports in the country. The interest in online gaming is directly feeding into the viewership of each and every sport which the fans wish to engage with.  This has been substantiated by a Kantar & FIFS survey published earlier this year which reveals that 59% users have started watching new sports because of their interest in fantasy sports, while 48% of fantasy sports users now watch almost every game irrespective of team or country. Not just that, in the coming years, fantasy sports industry is expected to contribute in a major way to job creation. A Price water house Coopers India report has predicted that the industry has the potential to generate an additional over 5,000 direct and more than 7,000 indirect jobs in the next 2-3 years. 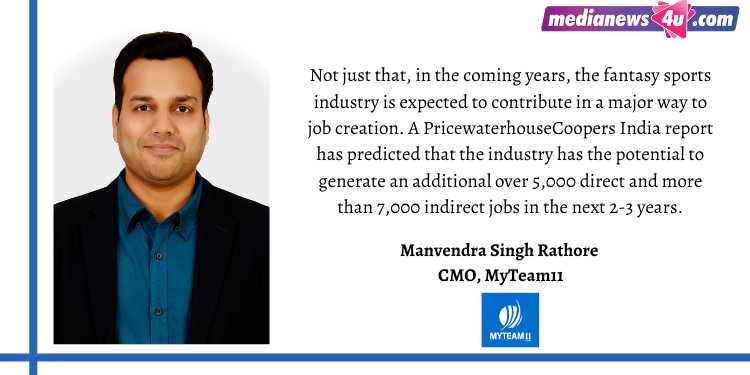 To further this point Union Minister of Youth Affairs and Sports Kiren Rijiju has said at the 10th Global Sports Summit TURF 2020, organized by FICCI that “Fantasy Sports has played a very important role in fuelling sports consumption and it has revolutionised the manner in which sports enthusiasts engage with their respective favourite sports.”

This gives our industry a huge boost in terms of the fact that India has finally started realising the worth of the industry and with the ministry recognising our efforts it is only going to grow by leaps and bounds. Therefore, I am very sure that in the next three years Fantasy Sports is going to be the largest driver for the Sports Industry not only in terms of partnerships but also as the most preferred medium to understand the sport in detail. 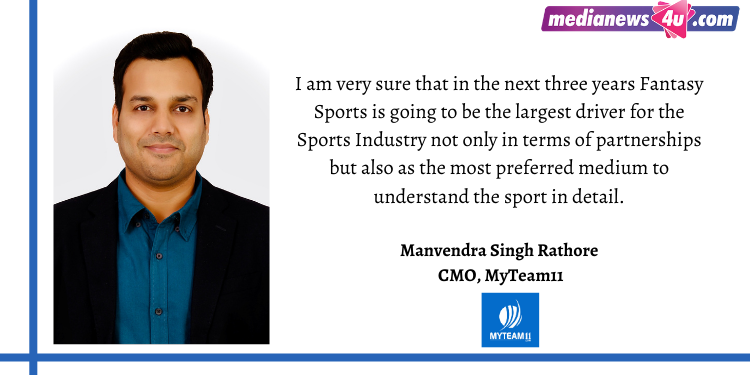 Fans are the key to building a strong sports brand and at MyTeam11 they are at the very heart of any kind of work that we do. We have innovated all throughout our four years of existence to give our users a plethora of offerings whether it is in terms of fantasy sports, online games or coming up with a multi-sport aggregator platform like SportsTiger. Hence, in the near future we wish to continue with this approach and ensure that our fans aren’t only engaging with the platform but also taking with them an experience worth telling. 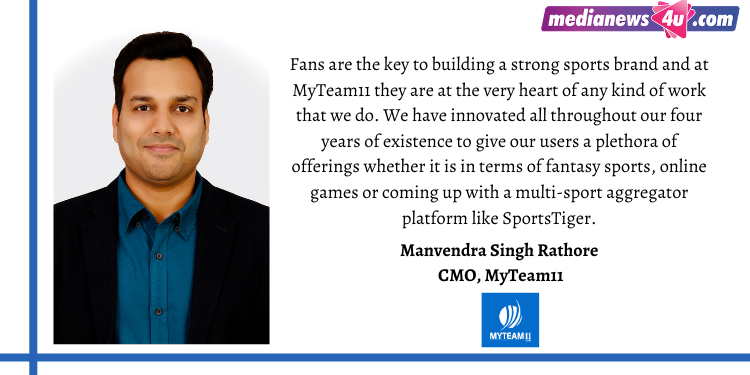