According to TAM AdEx-Report on TV Advertising for Jan-Mar’22 in comparison to the previous two years, Jan-Mar’22 saw a 29% rise in Ad Volumes over Jan-Mar’20, and was nearly equivalent to Jan-Mar’21. 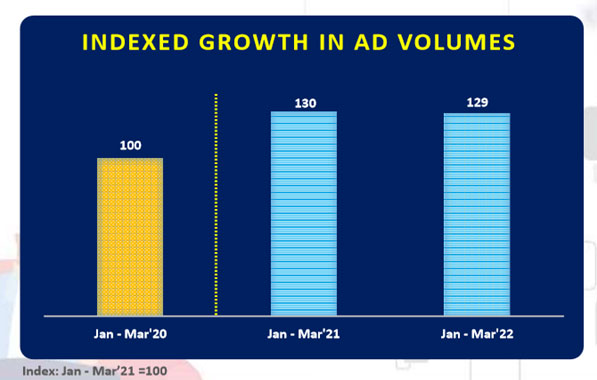 Among the Top Sectors, Food & Beverages remained on top in Jan-Mar’22 and Jan-Mar’21. Services stood at the 2nd position with 16% share.

Top three sectors together added 52% share of Ad Volumes in Jan-Mar’22 and the same were also among the Top three during Jan-Mar’21.

In the top categories in Jan-Mar’22, Toilet/Floor Cleaners claimed the top spot by displacing Toilet Soaps. Chocolates, Tea and Aerated Soft Drink were the three new entrants in Top 10 list in Jan-Mar’22.‘

Among the Top Brands, Harpic Power Plus 10x Max Clean claimed the top spot followed by Dettol Antiseptic Liquid at the 2nd spot. Total 6.2K+ brands appeared on TV during Jan-Mar’22. Six out of Top 10 brands were from Reckitt Benckiser and two were from HUL. Top 10 Brands contributed to 8% share of Television Ad Volumes.

195+ categories registered positive growth among the Top Growing Categories. Ecom-Gaming among the categories saw highest increase in Ad second ages with growth of 5.4 Times followed by Corporate/Brand Image with 2.5 Times growth during Jan-Mar’22 compared to Jan-Mar’21. In terms of growth %, Ecom-Gaming category witnessed highest growth % among the Top 10 i.e. 5.4 Times in the Jan-Mar’22.

Among the Top 5 Channel Genres during Jan-Mar’22, News overtook GEC as the most popular channel genre in terms of advertising.